The ARISE Musical Festival is returning this year for the sixth time. It will all go down on Sunrise Ranch in Loveland and with it comes more than 200 presentations and performances from music to yoga, wellness workshops, cultural ceremonies, art, film and activism, to name a few.

And much like the past five years, ARISE 2018 is rolling in with a stacked lineup. A mix of national and local acts that will perform across five stages with performers like Slightly Stoopid, Thievery Corporation, Opiuo, Bridget Law, Bass Physics, Dynohunter, Gasoline Lollipops and Dragondeer. We know that with a lineup this deep is can be difficult to get a taste for them all before the festival. And that’s why we here at 303 Magazine have created a playlist to help you properly pre-game for this year’s ARISE.

The ARISE Music Festival brings in some big names in the music industry and has, in the past, been a destination for locals looking to jam out under the Colorado sun.–

“People in Colorado love coming together around live music and the depth of the musical diversity being showcased at ARISE 2018 is taking this festival to new heights. It’s pretty rare that somebody would love just one kind of music — what most people love is really good music. People want to feel that groove that moves them, that reminds them of what it is that’s so damn good about being alive and gathering together in celebration. Feeling joyous is what it’s all about, ” explained Paul Bassis, co-producer at ARISE Festival.

In addition to the already hot lineup, New Zealand hailing, big beat dropping, festival fiend Opiuo will also attend. The internationally acclaimed DJ has rocked Denver multiple times, most recently this past April 21 at Red Rocks alongside Syzygy Orchestra and with support from Flamingosis, Anomalie and Colorado-based artist SunSquabi. Opiuo is known for non-traditional techno-dance music — blending funk-based EDM into his beats. The DJ’s latest album, Omniversal, was his first move from glitchy bass to electrofunk and we’re anticipating that evolution to continue into ARISE.

This year’s lineup is the best yet and we recommend snagging passes soon. As always, the three-day camping festival will plant a tree for each ticket sold and considering that tickets sold out in 2017, we recommend snagging 2018 passes soon. Rides will be offered to ARISE from Denver, Fort Collins and Boulder for only five dollars per person round-trip through Bus to Show.

Check out the full initial lineup below. You can find more information on passes, camping and parking options here. For a better idea of the festival’s vibe, check out our review of ARISE 2017 here. 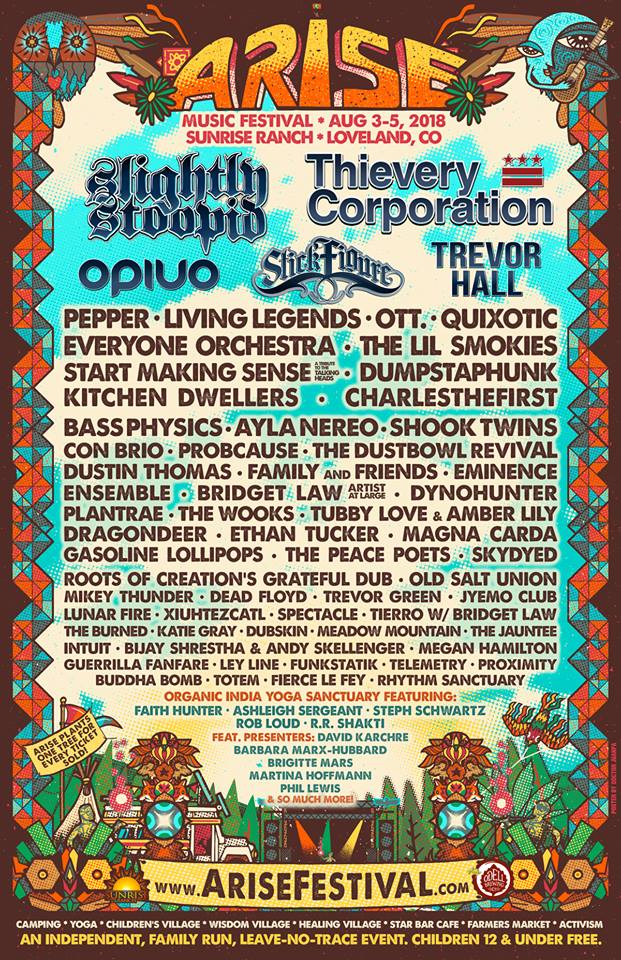