Exclusive – We Have the ARISE 2018 Lineup and It’s Awesome

The independent and family run ARISE Music Festival will return in 2018 for its sixth year with over 200 presentations and performances. Located on Sunrise Ranch, the Loveland festival graces Colorado every year with musical acts, yoga and wellness workshops, cultural ceremonies, art, film and activism. ARISE will return with all of that and more on August 3-5, 2018.

“People in Colorado love coming together around live music and the depth of the musical diversity being showcased at ARISE 2018 is taking this festival to new heights. It’s pretty rare that somebody would love just one kind of music — what most people love is really good music. People want to feel that groove that moves them, that reminds them of what it is that’s so damn good about being alive and gathering together in celebration. Feeling joyous is what it’s all about.” – Paul Bassis, co-producer at ARISE Festival.

As always, the lineup is stacked with a mix of national and local acts that will perform across five stages. Colorado performers like Bridget Law, Bass Physics, Dynohunter, Gasoline Lollipops, Dragondeer and more will be playing in Loveland for the 2018 installment. Headliners include Thievery Corporation and Slightly Stoopid with two more to be announced in the months ahead.

Also included in the music lineup are heavy-hitters like Trevor Hall, OTT., Living Legends, Pepper and more. But ARISE Music Festival doesn’t stop at the music — let’s not forget about the bountiful selection of other activities that will be on-site this August. Several yoga teachers have even been announced including Faith Hunter, Ashleigh Sergeant and Steph Schwartz.

Last year’s ARISE headliners included TIPPER with Android Jones, Atmosphere, Lettuce, SunSquabi, Beats Antique and Ani DiFranco. As always, the three-day camping festival will plant a tree for each ticket sold and considering that tickets sold out in 2017, we recommend snagging 2018 passes soon. Rides will be offered to ARISE from Denver, Fort Collins and Boulder for only $5 per person round-trip through Bus to Show. Check out the full initial lineup below. You can find more information on passes, camping and parking options here. For a better idea of the festival’s vibe, check out our review of ARISE 2017 here. 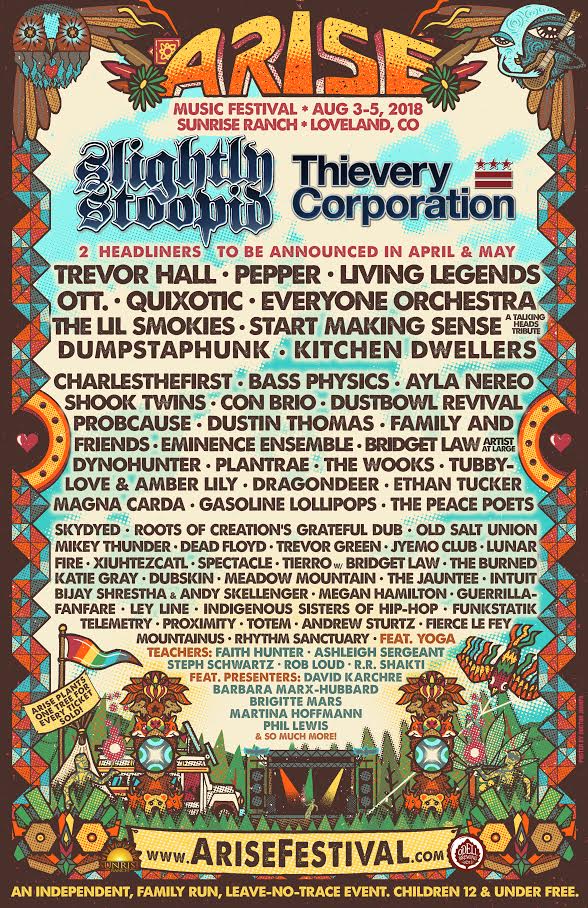