Get a Look at ChoLon’s New Taco Joint in Avanti

For Denver eaters, few things are as quick to inspire contention or camaraderie than one’s choice of taco joint. People are zealous, representing their favorite locales with evangelical fervor. With plenty of extraordinary spots to choose from it would be fair to assume that it would be hard to go wrong, but people still find room to squabble. Lines in the sand are drawn — the drums of war booming ever louder. Tacos in the city are no laughing matter.

Nor is Cholon Modern Asian Bistro. Chef Lon Symensma opened the acclaimed restaurant in 2010, going on to bring about Cho77 on South Broadway and Concourse in Stapleton. While Cho77 presents a similar menu of innovative pan-Asian bites, Concourse — a collaboration with Luke Bergman, a friend of Symensma’s 19-years strong — is all seasonally-inspired American fare. The chef is not one to be pigeonholed. The addition of a taco spot to his expanding empire may seem strange at first glance. But upon closer inspection, the choice neatly reflects Symensma’s love of global cuisine and his knack for viewing flavors free from the constraints of borders.

On Wednesday, May 2 BorraCho Tacos opened at Avanti. Replacing Kaya Kitchen — another of Symensma’s concepts, currently in the process of moving to a brick and mortar location downtown — the inventive spot nicely fills a longstanding taco-void that has long plagued the LoHi food-court. Helmed by chef Kevin Chu, the menu has all the cultural intermingling found in LA’s ever-expanding street taco scene. This is no accident. Chu cites Roy Choi and his wildly successful Korean taco truck Kogi as an important inspiration.

Every year Symensma sits down with his 23 managers to discuss where they want to go next. “We build concepts around people we believe in,” he said, describing his method for growth. Chu is a graduate of Cholon — so when he came to Symensma with the desire develop BorraCho, the idea was enthusiastically received. Later, at one of these annual meetings, the concept was given the green-light. The ability to recognize talent from within and give it the backing it needs to flourish appears to be one of the big reasons for Cholon Concepts’ continued success.

The menu consists of six tacos, three bowls, a couple sides, some refreshing beverages and an elusive breakfast burrito ($8) — served only during the weekend brunch, 11 a.m. – 2 p.m. on Saturday and Sunday. The BorraCho ($4.95) is shredded short rib, queso, sweet onions and pickled chili. The delectable and fairly sizable item is intended as an homage to Symensma’s now famous Cholon soup dumplings. The short rib is juicy enough to justify the comparison.

The Korean BBQ ($4.45) is grilled chicken, cream kale kimchi, romaine and scallions. The kimchi lends an excellent crunch, and while lacking much of the funk of its traditional counterpart it is still a spot-on garnish. The queso fries ($12) come loaded with beans, cheese, sour cream, guacamole and pico de gallo — all made in-house. The basket is surely intended for sharing, and even more suited for drinking. Fitting for a restaurant whose name roughly translates to “wasted” in Spanish. 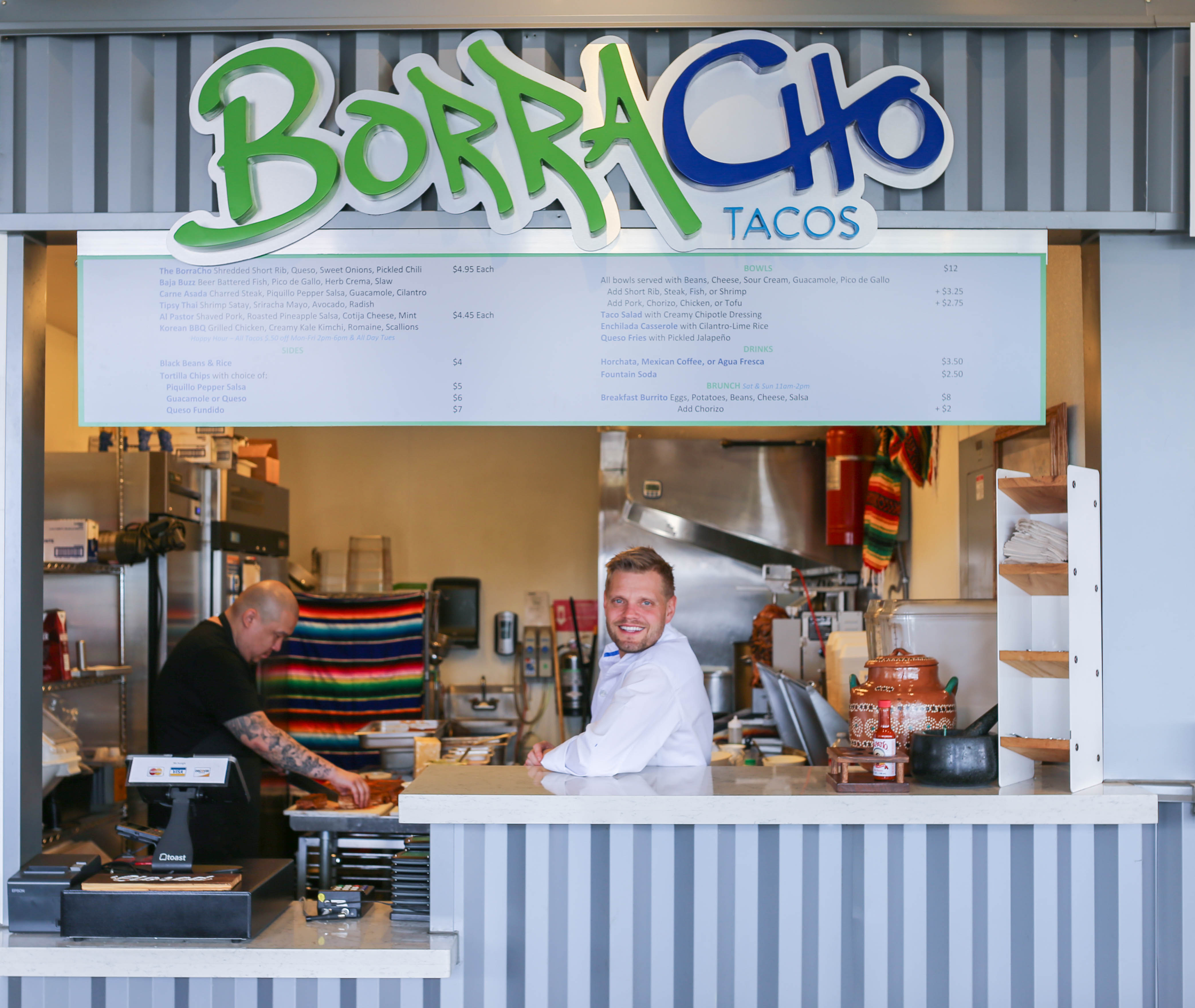 At nearly five bucks apiece the tacos are undeniably a bit on the pricey side. Fortunately, the tacos are big — even by street taco standards. The ingredients are also top notch. The al pastor is freshly shaved from a rotating wheel of glistening meat — one of the restaurant’s crown jewels. Whether or not customers will be inclined to pay the cost may depend on just how borracho they’ve managed to get on Avanti’s ample patio, but the new restaurant proves itself a worthy contender in the city’s ongoing battle for taco supremacy.