From bluegrass to alternative to rock n’ roll and, of course, hip-hop and rap, many local stars that call the city home are on the rise state-wide and nationally. Denver hasn’t, however, been historically known as a hip-hop hotbed. While cities like Los Angeles, New York, Atlanta and Houston have iconic, internationally known rappers that call them home Denver has yet to produce an artist of that caliber — and Colorado native Ray Reed is trying to change that.

“I’m from Colorado, born and raised, and that’s all I rep. I feel like Denver made me hungrier, we don’t have a superstar from Denver,” explained Reed. “Like Atalanta has Gucci Mane and the West Coast has its icons but we’re still trying to establish those big names here and that makes me hungry. There’s room at the top and I’m determined to climb.”
–

–
Reed was born on the east side of Denver and raised in Aurora. And though he spent some of his youth in Texas, he calls the Mile High City home — a city where the rap scene is on the rise. Recently Denver has seen some major attention from big-name labels like Cash Money Records and has become a place where artists like Reed feel that they can thrive and grind. 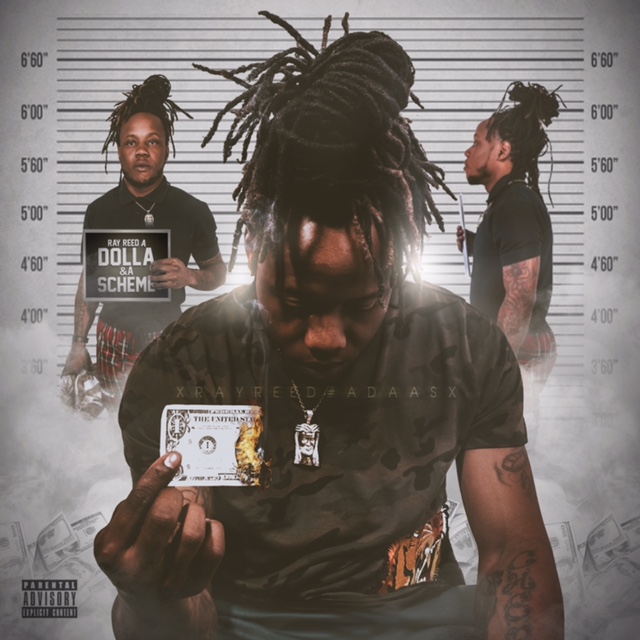 A Dollar and a Scheme courtesy of Ryan Ford

“Everyone in Denver music is trying to get with it right now, so shout out to everyone working, I’m definitely working,” said Reed. “I’ve found my lane here. I speak for the streets, the struggle and the hustle. I make money and I make music for people that want to go get some money because that’s what’s controlling everything. We all want to get paid at the end of the day. Realistically that’s where it’s at.”

Reed’s last album, Pac Man, is a testament to that “go-getter” energy. Released in 2017, it pays homage to the hunger that Reed says is necessary to survive. And his next release, A Dolla & A Scheme, dropping May 10, continues that truth.

“This is a Pac Man world, we’re here to eat and if we don’t eat — we die. That’s it,” stated Reed, about his first album’s title. “You’ll run into your obstacles and you ‘die’ but then you’re born again. That’s the world. You’re put here to eat. Every day is Pac Man, waking up and trying to figure out how to get it.”

Reed entered the rap game in 2009, but he didn’t realize that he had a shot at success until a few years later. Pac Man took him and his team a year to produce but he’s already on to his second album, A Dolla & a Scheme, dropping this month.

“This next drop is dedicated to one of my homeboys, he’s locked up for 16 years,” said Reed. “It drops May 10 because that’s when he lost the trial in court. The album is a dedication to him and a follow up of the hunger and drive that I threw down in Pac Man.“

That hunger garners attention for Reed across the state and the nation. His upcoming performances include 303 Music Fest this May 17 and the Westword Music Showcase in June. In addition to those two events, he’s aiming to sell out The Fox Theatre in early August — and that’s a show you won’t want to miss. Apart from his drive to climb the rap ladder, Reed’s aim is to inspire his fans to get hungry and get after it.

“I want to let my fans know that they can do what they want to do, don’t quit,” stated Reed. “This project is for the survivors. It’s for people who get up and know that they need to go for it. Everyone is just tryna find a dollar and a scheme, that’s where everyone is at. I personally feel like I can do whatever I want right now, and my fans respect it. I’m ready.”
–

READ: The 303 Music Fest Lineup is Here with Over a Dozen Local Acts

–
You can listen to Ray Reed’s latest release this May 10 on Spotify. For more information on his 303 Music Fest performance, this May 17 and other upcoming shows stay tuned with us here.