Jubilee Roasting Co. Strives To Be A Good Neighbor in North Aurora

In the midst of unassuming beige brick buildings of North Aurora, across the street from a home with an AstroTurf lawn, a blue-gray building with an extravagant mural painted on its north wall makes its presence known. On sunny days, its dual garage doors hang open, making way for soft, resonating tunes to meander from old brown speakers perched high on shelves to Kenton Street just south of Colfax. Inside, you’ll find a cozy cafe with diverse paintings decorating the walls and a large chalkboard reading: “Create Well & Be Good Neighbors.”

The cafe is called Jubilee, a word that white script painted on a black wall inside defines as “Emancipation. Restoration. Celebration.” 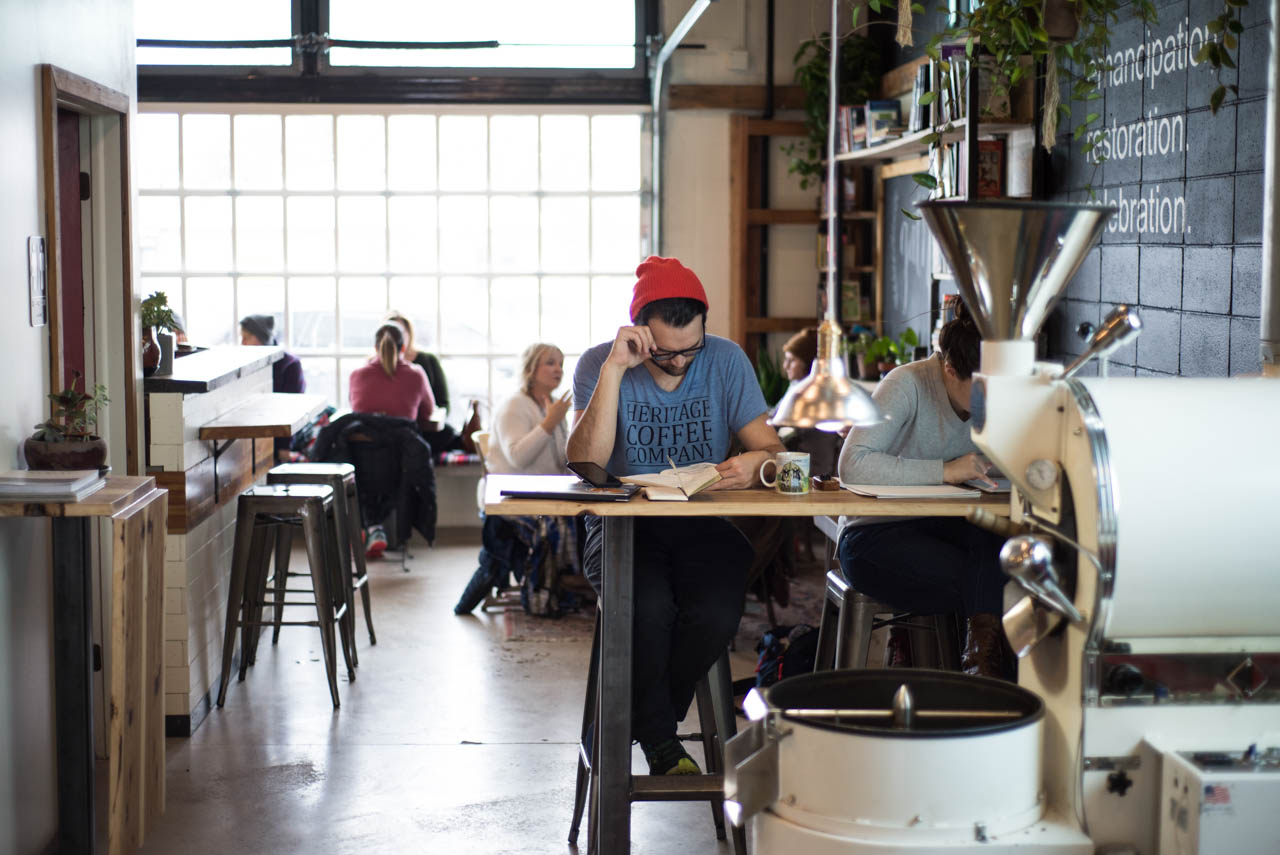 Jubilee opened just over two years ago. Founded by Peter Wanberg when he was just 23, its purpose — beyond providing tasty coffee — was to provide space for artistic inspiration and community gathering. That’s why Wanberg converted the large warehouse behind the cafe — which once housed auto parts — into art studios. In fact, all paintings that hang on Jubilee’s walls come from the artists renting space.

“The aesthetic is less planned and more a result of our identity,” Wanberg said. As patrons and artists come and go, that identity morphs, leading to an open-minded feel that promotes free expression and ease of mind.

Wanberg has artistic sensibilities at heart. Alongside his entrepreneurial pursuits at CU Boulder, he “dabbled in sculpture-focused mediums.” It’s impossible to ignore the aura of artistic appreciation inside Jubilee. Even the books that stack the shelves — which, along with the other furniture throughout the space, Wanberg constructed with friends and family — promote high-minded artistry. You won’t find Dean Koontz or Jodi Picoult, but you’ll find numerous offerings from Dostoevsky, Twain, Hurston, and Chesterton to inspire your thinking.

Amidst the free-flowing artistic aesthetic, however, a significant question arises: does Jubile belong in North Aurora? Or is it merely another beacon of the gentrification sweeping Denver and its surroundings with seemingly no boundaries?

These are questions Jubilee’s employees consider with seriousness and humility. Jubilee has never intended to isolate or drive out their neighbors as a profit-focused cafe might. Rather, it seeks to bridge the gap between its neighbors and the more affluent demographics hip new cafes tend to draw. While the menu offers specialty drinks — such as “The ’90s Kid”, described as “peach and berry espresso soda” — it also offers $2 drip coffee and $3 bottomless mugs.

Jubilee also partners with various community organizations and rents out its space to those who need it. It continually reaches out to its neighbors on Kenton Street and beyond with flyers and invitations to drop by. In its most laudable act of community outreach, on the first Friday of each month, Jubilee has live music and serves free coffee (yes, free coffee) all day — and the free menu includes such fancy options as Kyoto Cold Brew. Obviously, the event’s goal isn’t immediate profit. The goal is to bring people together and have a darn good time. 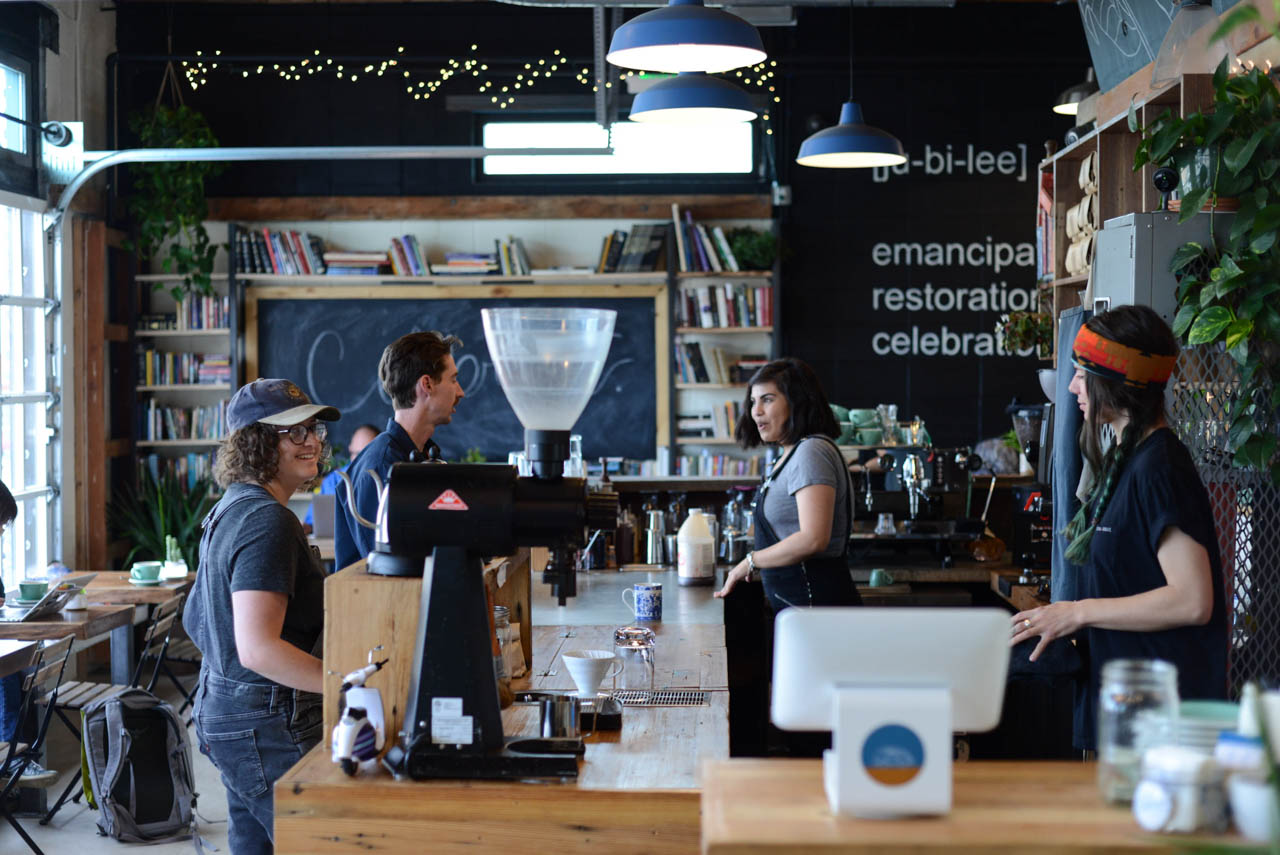 “There was a need for more community gathering spaces in North Aurora,” Wanberg said. “There’s so much culture, so much history, so much beautiful community and diversity in the neighborhood, and there aren’t many spots where people from different places are meeting.”

Even the building that houses Jubilee has a fascinating history behind it. In the ’70s, the north section of the building served as a police sting unit for drug busts — Wanberg’s heard (unverified) stories of snipers stationed in the hotel across the road.

But Wanberg and crew aren’t interested in contributing to the narrative of North Aurora being a crime-ridden place. They view their neighbors with respect while humbly realizing the destructive possibility of their presence.

“If you’re not being careful with how you go about existing in a neighborhood, you have the potential to influence that neighborhood negatively,” Wanberg said. “We’re trying to figure out how to be sensitive to our neighborhood. It’s a journey to understand more of what’s going on around us.”

It’s a formidable challenge to integrate communities, and it cannot be a passive process. If a coffee shop in North Aurora is going to do more than participate in a trend where middle/upper-class people buy up an area — and its culture — to appropriate it for its own purposes, there must be active inclusion and recognition of the value of the existing community and its history. And when Wanberg speaks of this area of Colfax, with its numerous hotels charting the course west to Denver, he does so with a historian’s respect and eagerness to learn more.

“It’s had all sorts of crazy history,” he said, “and we get to learn a ton about what its history is, listen to the people around us, and be a part of the community here.”

Jubilee’s engagement in the community comes across subtly as well. If you ask the staff to recommend a place for a bite, they won’t send you to the nearby McDonalds or Popeyes. Instead, they’ll tell you to check out Taco Mex, a place down the road with Latin American shows on the TVs, Mexican dresses and Mother Mary statues hanging on the walls and fantastic breakfast burritos for $3. Upon walking in, you can’t help but sense that thousands of fascinating stories lie at the restaurant’s heart.

Still, can such mindfulness prevent the negative effects of gentrification on communities like North Aurora, especially when coffee shops themselves are often perceived as emblematic of the issue itself? Jubilee’s staff isn’t sure, but Wanberg recognizes coffee shops are not the issue. At most, they’re a sign of shifting economic patterns in Denver and Aurora, trends that will undoubtedly continue.

“It’s inevitable,” Wanberg observes, “so you have to figure out how to be a part of that process in a healthy way.”

Positively affecting an established community takes continual outreach, new ideas and, most of all, respect for one’s neighbors and their unique history. In the early stages of North Aurora’s shifting economic climate, Jubilee Roasting Co. is asking questions and promoting practices other coffee shops and businesses facing the touchy reality of gentrification might do well to consider. After all, who wouldn’t want a neighbor that offers them free coffee?

All photography by Elliot Lambdin.