[UPDATE 7/24 at 5:30 p.m.]: Drake has postponed both Denver shows. In a Facebook post by Live Nation Colorado, they delivered a statement from Drake saying, “In order to deliver the high standard tour experience our fans expect and deserve, we have made the necessary decision to slightly adjust the beginning of the Aubrey & the Three Migos tour schedule. The tour will now kick off in Kansas City on August 10th, with a limited number of additional shows being rescheduled. Tickets purchased for the original show dates will be honored for the rescheduled dates.” Denver is currently the only postponed show without an announced rescheduled date.

[UPDATE 7/24 at 3 p.m.]: Altitude Tickets announced today that Drake has postponed the Sunday, July 29 concert. The Saturday, July 28 show is still scheduled for this weekend. The rescheduled date for the Sunday show is TBD as well as information on the possibility of refunds. 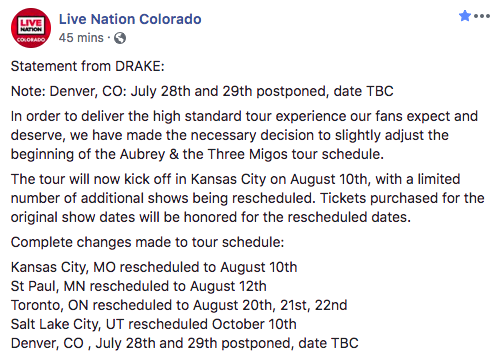 After coming to the Mile High City on his last two tours (while rocking a Broncos jersey and claiming Denver to be the most hype crowd), OVO returns this summer. Set for July 28, the “Aubrey & The Three Amigos Tour” also brings rap heavyweights Migos to the Pepsi Center for what will be a can’t-miss show. This is especially true since Drake has teased an album drop just a month before he’s set to appear in Denver. Reportedly titled Scorpion, the Toronto-born singer made the album announcement during a surprise appearance at a Majid Jordan concert in his hometown last month.

Tickets go on sale this Friday, May 18 but in the meantime catch a glimpse of the dynamic team in Migos’ new video “Walk It Talk It (featuring Drake).”

Tickets will be available on Ticketmaster and you can get them here.