Somewhere over the rainbow might soon be the stretch of Broadway before or after Irvington Place in Denver.

Plans are in place for the installation of two rainbow crosswalks at the junction of those roads, right by Buffalo Exchange, in the coming months. Organized by Buffalo Exchange, Denver City Council members Jolon Clark and Robin Kniech and the Baker-Broadway Merchant Association, the rainbow crosswalk will join many others in the nation in support of the LGBTQIA+ community. Because of the heavy Broadway traffic, the crosswalks require thermoplastic materials to mark the pavement instead of paint. That process is quite a bit more expensive than painting, leading the team to ask for fundraising help. Of the $25,000 needed, they’ve so far raised $22,156.42 (as of April 24, 2018).

Ideally, the pair of rainbow crosswalks will be completed before the start of Denver Pride Fest — an annual celebration of all things LGBT that’s happened since 1975. For the last five Denver Pride Fests, Buffalo Exchange hosted the Gayer Pride Crosswalk Walk-Off. This fun pop-up fashion event gives “Kings, Queens and Everything In-Betweens” a runway on the north and south Broadway crosswalks during red lights to strut their stuff. If the fundraising goes successfully, those crosswalk-runways will transform from drab to fab — making this year’s Gayer Pride walk-off the most memorable to date. 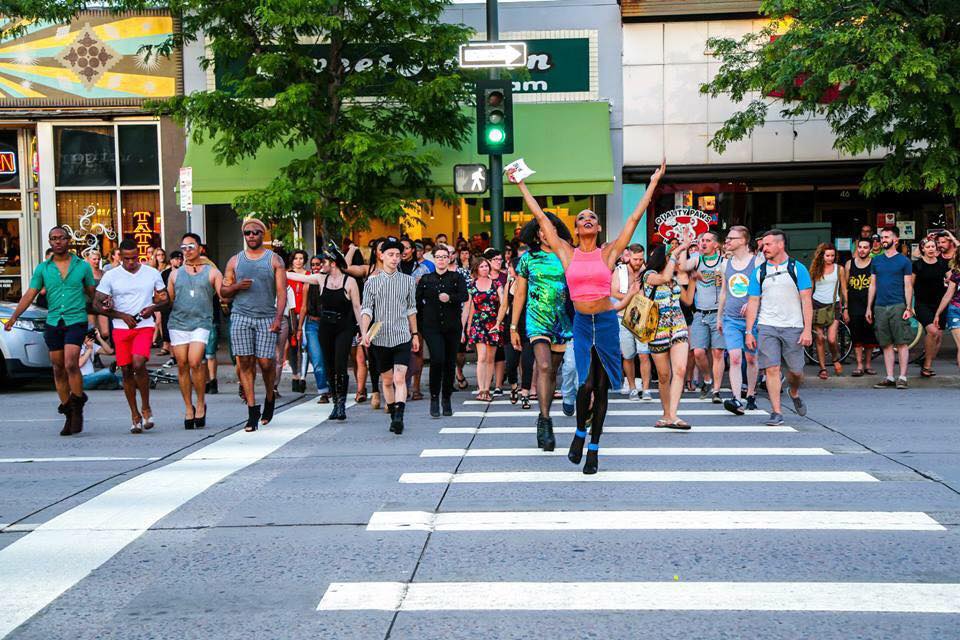 Rainbows hold so much symbolism — from luck to chakras to just a damn beautiful view — you don’t have to be an active member of the LGBTQIA+ community to find wonderment in these installations. But, of course, the hopes for the rainbow crosswalks weigh heavily on inclusivity and support of that community in Denver.

Councilman Jolon Clark explained, “this is a way we as a city and community can wrap our arms around the LBGTQ community and tell them how much we value them, care about them and love them in a very tangible and visible way.”

Other national locations with rainbow crosswalks include Atlanta, Hollywood, Tuscon, Key West and San Francisco. And the origin story of rainbow crosswalks seems to come out of Sydney, Australia, where a pedestrian crosswalk was painted with a rainbow after a Mardi Gras celebration in 2013. The city then removed the paint, despite many protests from fans of the new paint job. This led to guerrilla tactics, where DIY rainbow crosswalks — applied with chalk or paint — popped up without permission throughout Australia, and eventually the rest of the world. But, not all cities feel the way Sydney felt about the rainbow makeover, leading to legitimate rainbow crosswalk projects like the one Denver wants to install.

Unlike the Sydney rainbow crosswalk or the temporary (and rebellious) chalk pop-up ones, Denver plans on using thermoplastic materials to create a permanent installation of the colorful design. Made with a mixture of glass beads, pigments, binder and filler, the marking material liquifies when heated, sealing to the surface of the road and creating a surface able to withstand traffic. According to the fundraising website, the thermoplastic only uses “100 percent solid, environmentally and user-safe compounds.”

The rainbow crosswalks could easily become one of the mainstay public art installations on that stretch of Broadway, and though they will be simply nice to look at, they’ll also hold more significance to a large community in Denver. And, much like seeing a rainbow in the midst of stormy skies, having public art that can brighten someone’s day is a magical thing.

The Gayer Pride Crosswalk Walk-Off is scheduled for June 15 at 6 p.m. Sign up here if you want to participate.