The Real Danger of Faking a Service Animal

When children used to bombard Sam Short to pet her now-retired service dog, a Labrador mix named Clyde, she would politely intervene and explain that he’s working. She’s not surprised at the slack-jawed expression she received as they pulled their hands away.

It’s not uncommon to encounter dogs in public places like grocery stores and shopping malls in Colorado. As the number of households that own a dog continue to rise, so too does their perception that dogs should be allowed in all public places.

Why It’s a Problem 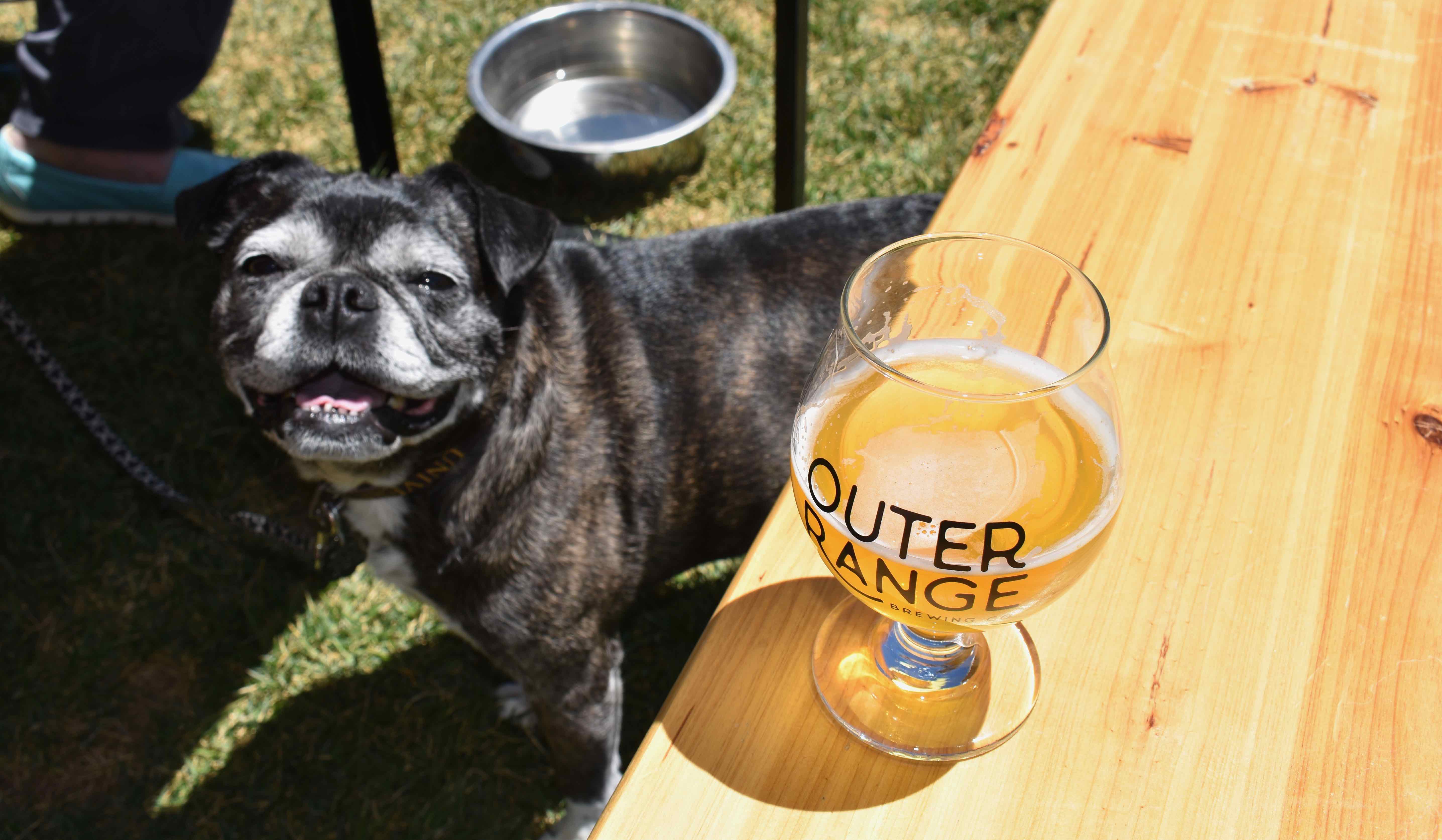 Over the past few years, Short has seen an increase in the number of fake service animals being accommodated in public. The Denver resident who relied on a service dog to aid her condition of dysautonomia — a disease that affects her autonomic nervous system — said that people are even getting away with taking them into public bathrooms. And that could have serious repercussions because it diverts the dog’s attention away from its handler.

It isn’t difficult to equip a pet dog with a custom service dog ID card and vest and take them into a public business. Both items can be purchased online for around $50, and it is legal to purchase. The problem is that many people who are buying them are doing so just to reap the benefits that service animals provide their handlers — and that creates a huge problem for businesses and the disabled people who actually need a service animal.

Service animals provide trained skills for a person with a disability that enables them to function in daily life. The Americans with Disabilities Act (ADA) recognizes dogs and miniature horses as service animals. Both animals can help people do things they can’t do autonomously, like opening and closing doors, paying at the checkout counter or retrieving dropped items.

There is no certification needed to train a service dog in Colorado. The only requirement is that the dog has the necessary skills to be of service to their owner. The grey area this creates is problematic because many self-trained service dogs do not have the social behavior skills they need to be in a public setting, and if the dog is not trained to spend time in public places like grocery stores and restaurants, it’s very stressful for them.

“I’ve seen the vest that people order online, and the dog is terrified and uncomfortable,” said Angela Eaton, the executive director of Canine Partners of the Rockies (CPR), a professional service dog organization based in Aurora. 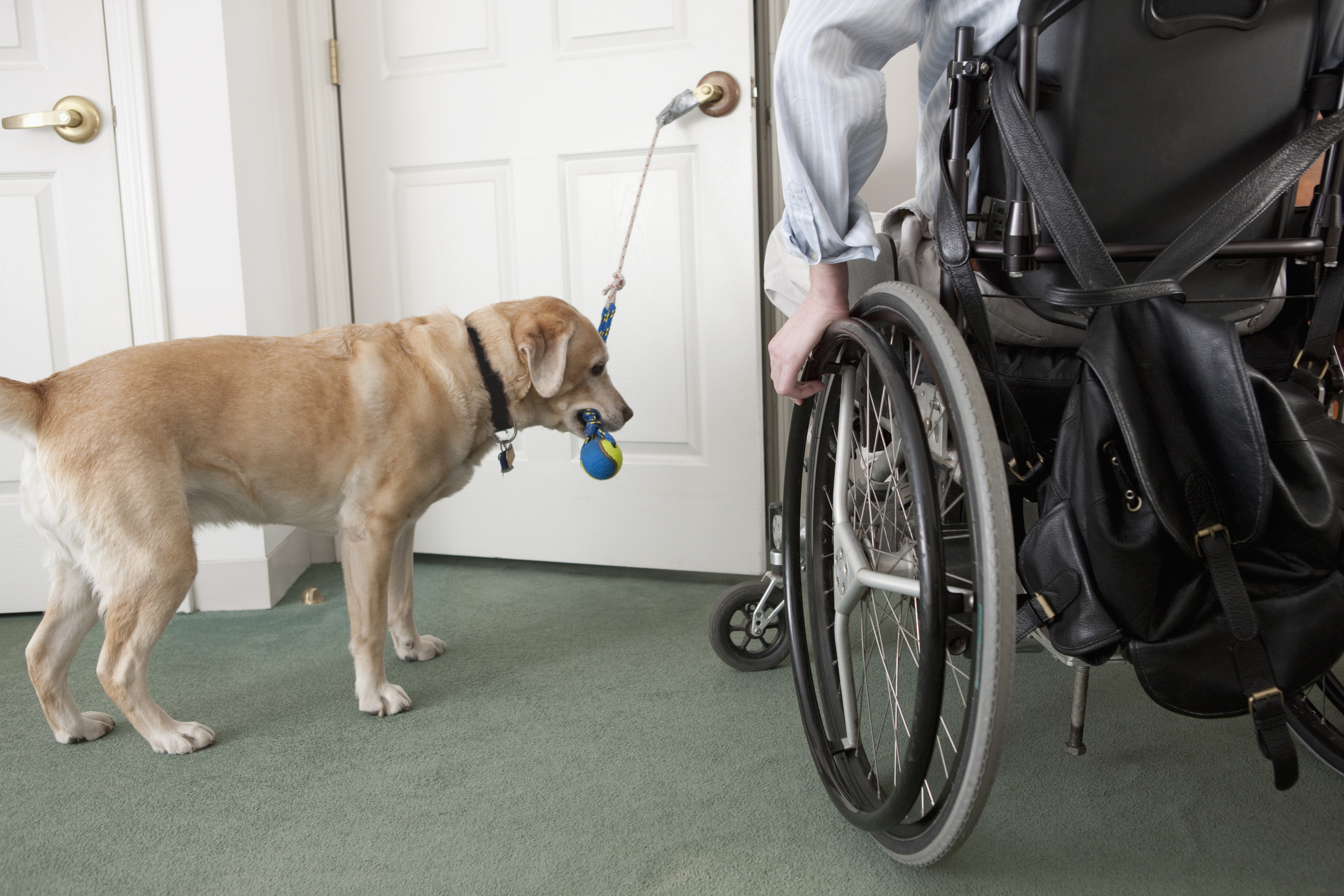 The limited supply of professionally trained dogs that are available at any given time is one of the main reasons why people decide to train their dog themselves. Established service dog breeders take two to three years to sufficiently train a dog. According to Eaton, the average cost her organization incurs for raising, training and placing a service dog with a person is $63,000—and that doesn’t factor in the cost of the puppy.

For that reason, organizations like CPR are very picky about the dogs they train. That results in a three to six year wait time on average for a service dog.

Those who don’t know how to train their own dog or don’t have the time and money to go straight to the source aren’t completely barred from obtaining a well-trained, confident service dog. There are programs around the country that take well-tempered rescue dogs from shelters and train them. The selection process is not as critical as the one used by organizations like CPR. That means a dog who displayed good behavior at the time of selection could be dropped from the program should it begin to act in a way that would not be conducive to their new job.

People who purposefully misrepresent a service dog know they are exploiting the law so they can bring their dog into a place where it otherwise wouldn’t be allowed. But Eaton says that public places are not dog worlds, and people need to consider that their dog will most likely be uncomfortable in a shopping mall or grocery store. She said professionally trained dogs are very relaxed and confident when they are in public, but they have to be trained to accept being there.

CPR places a great emphasis on ensuring their dogs are both trained to perform specific tasks and behave calmly in social settings. They also work to make certain that a dog is a good fit for their new owner. When those criteria are met, a minimum of 160 hours goes into training the partnership between the two. CPR will then perpetually follow up with the handler to make sure no problems have come up. 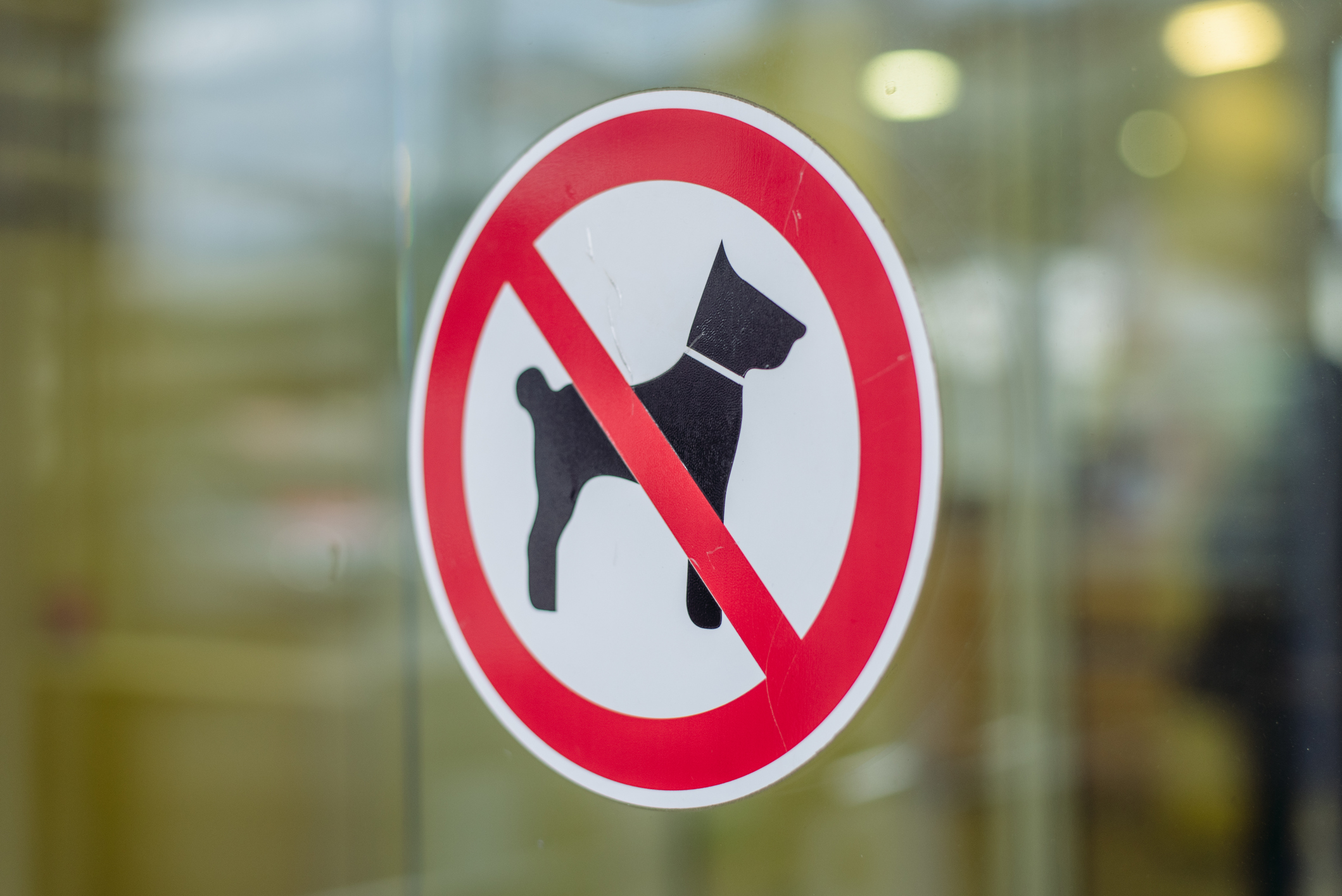 Businesses need to understand that they retain the right to deny access to a dog that isn’t displaying behavior of a well-trained service dog. Eaton has had multiple encounters with business managers in northern Colorado who fear they will be sued if they begin to question the validity of someone’s dog. This type of response highlights the confusion surrounding service animal laws in Colorado. Businesses still want to do the right thing, they just need more education on what their rights are.

On January 1, 2017, a bill that was passed by Colorado legislators and signed by Governor Hickenlooper the previous summer went into effect. The bill makes it a class 2 petty offense to intentionally misrepresent an animal as a service animal in the state. Violators of this new law will be hit with a fine of $25 for their first offense, $50-100 for a second offense and $100-500 for a third or subsequent offense.

According to Alison Butler, the director of legal services for Disability Law Colorado, there are no laws that require a special training or certification for businesses or employers to understand the rights of people with disabilities. She said that they simply need to take action to ensure they are informed and in compliance with the law enacted by the ADA that protects the rights of service animal handlers in public.

“This law is one of many that businesses and community members need to understand to operate in society, and there may be work on the early end learning it, but it can be done with a little effort,” Bulter said. “I do not believe we need more laws, people just need to commit to learning what is already out there.”

Still, it’s not uncommon to be in Denver and see dogs in businesses like restaurants, breweries and grocery stores. Many of the former are starting to tap into the dog-loving demographic in Colorado and advertise themselves as dog-friendly businesses.

303 Magazine tried to reach out to various grocery stores, breweries and restaurants in Denver to see if they had any comment for this story. All of them pointed us to their PR department, who eventually declined the offer.

Sprouts was the only business whose employees offered 303 any insight into how they handle dogs in their stores. Only managers at Sprouts are allowed to question the validity of someone’s service dog. But they do know their right to question them, and they question every dog they see enter their store. The problem with this policy is that associates like cashiers and grocery clerks are not allowed to engage in that line of questioning. So if a manager isn’t on the sales floor to see the dog, it’s not going to be questioned.

Illegitimately representing a service dog makes it more difficult for people with real disabilities to bring their dog in public places and have unquestioned access. That makes many service dog handlers apprehensive to even leave the house with their dog anymore. Short said she felt uncomfortable taking her service dog to the grocery store because of the chance they’ll run into an untrained dog.

“I think I met more untrained, barking, uncomfortable dogs at grocery stores and Target, where the dog would be on a flexi leash,” she said. “It would see me and my dog and just start barking. It was very easy to see that they were not real service dogs, even if they had a vest on, because barking like that is not an acceptable service dog behavior.”

Eaton said that there have been times where her clients’ dogs were attacked by another dog in public. She said the owners of the attacking dogs claimed their dog was a service animal. But based on that description of the dog’s behavior alone, professionals like Eaton would disagree. “That’s not a service dog,” Eaton said. “And that’s why we’ve had people who say, ‘I’m not going there anymore because I need a service dog, but I don’t want to have to deal with what’s out there.'”

For people who enjoy being able to comfortably take their service dogs in public, the idea of dog-inclusive businesses transforms that feeling of comfort to angst. “What’s happening is people with service dogs are now trying to protect their dogs by not going out in public like they normally would,” said Eaton.

That doesn’t mean businesses should begin to scrutinize service animals for the sake of protecting their business and clients from the fake or poorly trained ones. Eaton says they still must respect the privacy of service dog handlers, and if the dog is a legitimate service dog, the business must accommodate it.

“Basically, a service dog is like a wheelchair for somebody with a disability. So you can’t say you could come into my restaurant or grocery store, but you can’t bring your wheelchair,” Eaton said. And she educates her clients to be prepared to explain what their dog does for them so they don’t get offended when they are questioned about it.

Short says that she takes the side of the untrained dogs when they behave erratically in public. She has a bit of advice for those people who feel empowered by the confusion surrounding service dog laws in Colorado enough to boast their pet dog as a service dog.

“Think of your pet and their best interests—that you’d be putting them in an environment that is very stressful for them. And if you wouldn’t want to be in a stressful environment, don’t do that to your pet,” said Short.

What to do When you Encounter a Service Animal 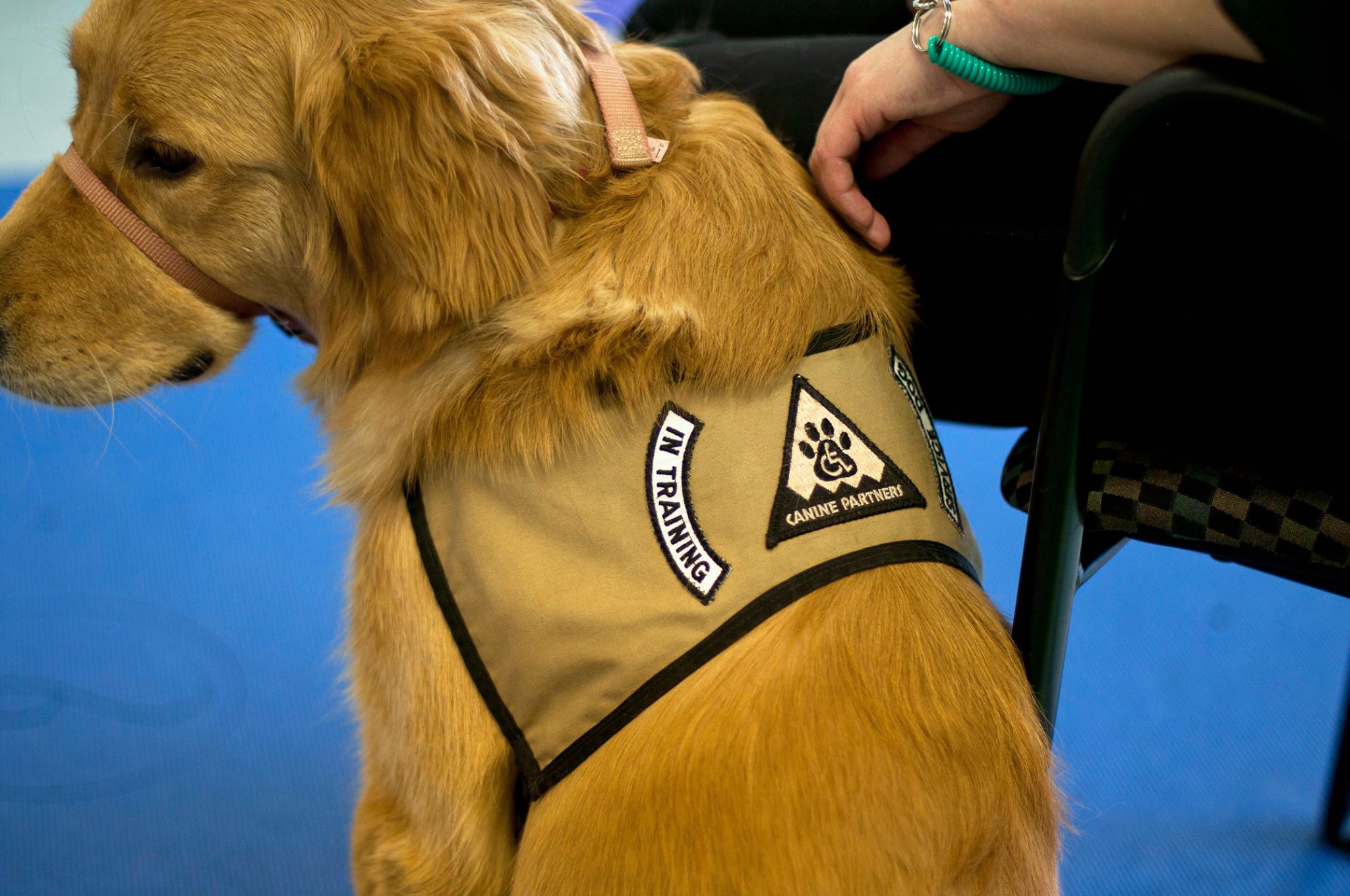 Photo courtesy of Canine Partners of the Rockies Facebook.

This doesn’t mean that people should completely stop taking their pets with them when they leave the house. They just need to understand and respect the rights of service animal handlers and only stick to taking them to one of the more than 200 businesses in Denver that are deemed “pet-friendly.”

Service dogs in Colorado are not required to wear a vest or have an ID card when they are in public. State regulations allow businesses and other places of public accommodation to respectfully ask two questions to people who are being assisted by an animal to determine its legitimacy.  Is this dog a service animal? What services does it provide for you?

This is especially important for businesses to be aware of because untrained service dogs pose a threat to both their business and clientele. When dogs are stressed out, they’re more likely to behave violently.

For Eaton, the bill that Colorado put into law last year is a good start to combat fake service animals in the state. But she is certain that pet owners, businesses and service animal handlers cannot simply rely on legislation if they want to reverse this trend. “People have to change things,” Eaton said. “People are the ones that are going to have to say that’s not acceptable.”

Here are some tips to help you react when you encounter a service animal in public:

Hopefully, these tips will make it easier for those with and without service animals to better co-exist and keep Denver friendly for both dogs and as well as those with disabilities.