When a crowd of almost 10,000 people bob their heads in unison throughout the night, it’s evident the performing bands have done their job. That’s what was happening at Red Rocks Amphitheatre in Morrison Friday night when Vulfpeck, Kamasi Washington and Knower all played the prestigious venue. These bands kept the pace, making the evening under the stars an electro-jazz-funk delight.

L.A.’s Knower have been together since 2010 and receive much of their international recognition from viral videos and live visual experiences. This electronic funk group is fronted by Louis Cole and Genevieve Artadi. They got off the internet to play outside for the early birds, intent on getting as close to the stage as general admission seating will allow.

Backed by additional keyboard players, Cole and Artadi’s instrumental set up bounced off the amphitheater walls in just the right way. That’s not counting the loss of the lower-middle ranges. But that was an issue the entire bill faced. That’s the risk bands take when performing outdoors — even when the venue is Red Rocks. 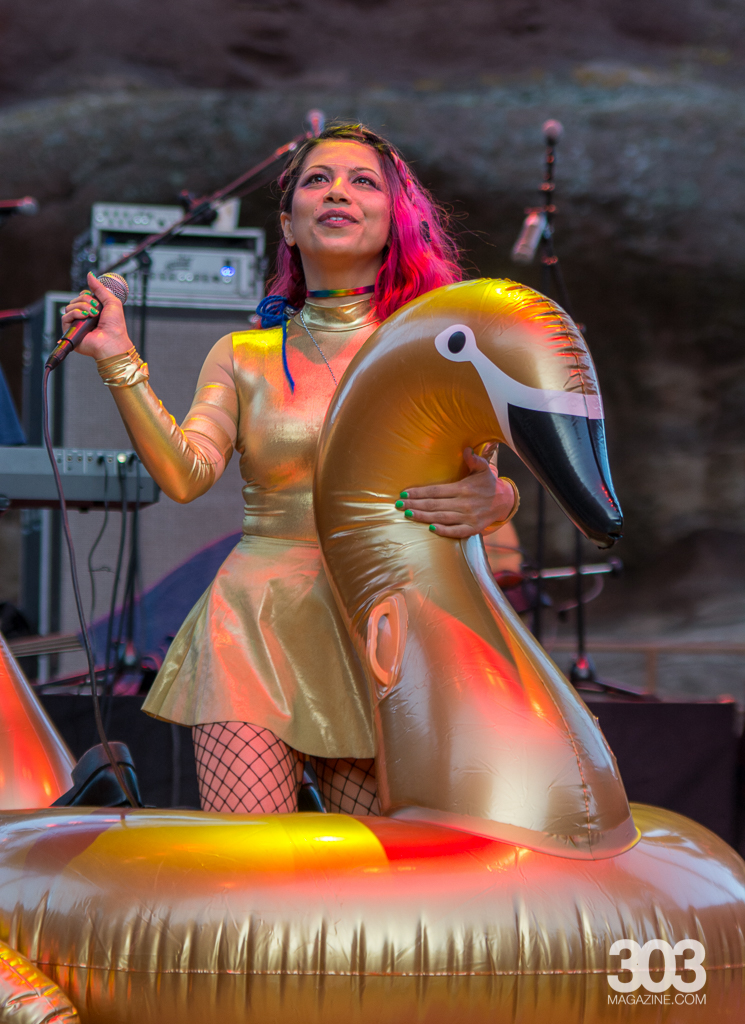 Halfway through Knower’s set Artadi sang “What’s In Your Heart” from a crew member’s shoulders. Any vocalist can imagine how difficult that is, but the airy quality of Artadi’s voice and acute delivery helped her pull off the unusual gimmick. The song “Pizza” from Knower’s 2016 album Life stuck out for the crowd. Any song that goes, “In it just for the pizza/ Not for the money/ In it just for the pizza/ Pepperoni,” will get a crowd amped — simply because it’s relatable.

Kamasi Washington came out next with his band and together they brought the fire. “You all look amazing from where I’m standing,” he said before the musicians launched into “Re Run Home.” With a glass shield behind her — preventing the two drum kits from playing through her microphone — Patrice Quinn stole the spotlight. Each artist shone with their own extended solos — one of the most celebrated and critiqued aspects of jazz music.

Bandleader and saxophonist Washington uses music as a tool to bring about social awareness about inequality in our culture. Before diving into the song “Truth,” he addressed the audience again — “I look out there and I see all of you beautiful people here together with love in your hearts and I say the whole world can be like this.” Soon followed by, “our diversity is not something to be tolerated, it’s something to be celebrated.” 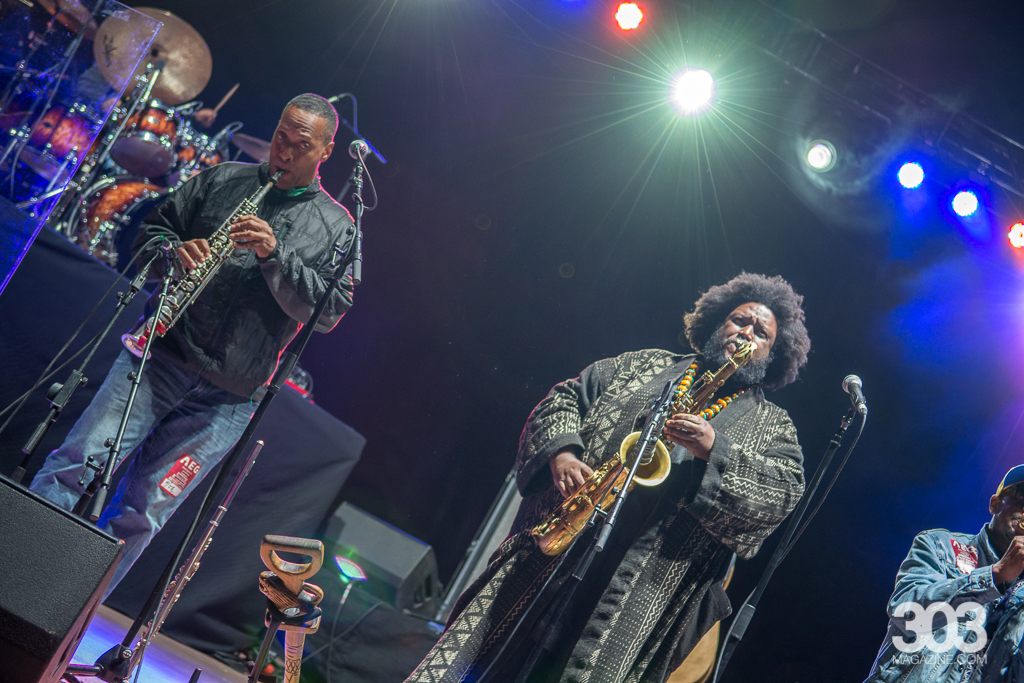 In the music industry, Washington is hot right now. The jazz musician and composer arranged strings and played tenor sax on Kendrick Lamar’s To Pimp a Butterfly and DAMN. He released the triple album The Epic in 2015 and the Harmony of Difference EP in June. His new double album Heaven and comes out in June. During the show, he played “Fists of Fury” off the new record — a rearrangement of the Bruce Lee film’s title song of the same name.

After Washington and his band ignited Red Rocks with jazz, Vulfpeck brought the funk. Bandleader Jack Stratton riffed on the keyboard — a similar sounding riff that was resurrected throughout the night — calling the different members out. For several songs, the musicians transferred between instruments and ran off and on the stage. This dynamic lasted throughout the show.

When the show was up and running, Stratton passed the mic to Theo Katzman, who hopped off drums to sing lead on “Animal Spirits.” Then he passed the mic off to Charles Jones for “Baby I Don’t Know Oh Oh,” and “Game Winner” — which was originally a Joey Dosik song. Dosik was there delivering hefty saxophone solos for much of the night. Jones then passed the mic off to Antwaun Stanley who was taking the stage for the first time for “1612.” 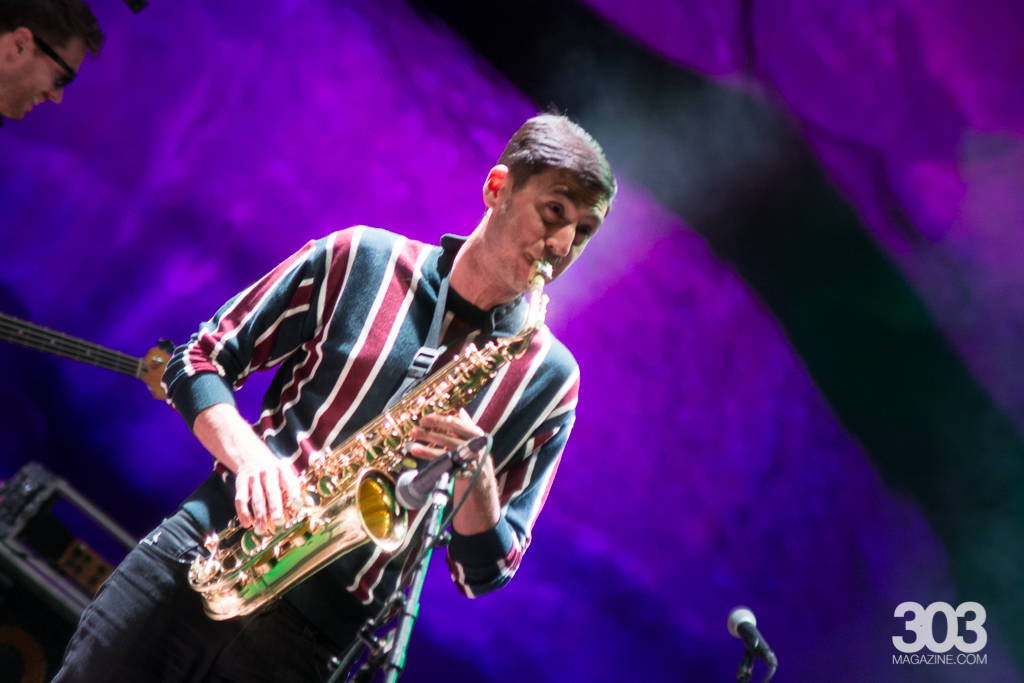 Stanley scat-sang on “Funky Duck” as multiple players were taking turns on each of the keyboards onstage. At that time, guitarist Cory Wongwas sprinting to the top of the mini tower for a 30-second solo. He ran back down to the main stage, collapsing suddenly and receiving an oxygen mask. It wasn’t real — although maybe it was a little too real. Mostly, it played as a theatrical bit and therefore came off a little cheap for those of us sympathetic, yet already acclimated to the altitude.

Friday was Vulfpeck’s third Red Rocks show and their first as the headliner. All members of Vulfpeck are in the musical leagues of Snarky Puppy  — who Knower has toured with — in the sense that both groups have a certain formal funk precision to their work. There is no doubt every member of Vulfpeck is hyper-talented. Their ability to swap instruments on the fly gives them flexibility in their technicality and performance aesthetic. 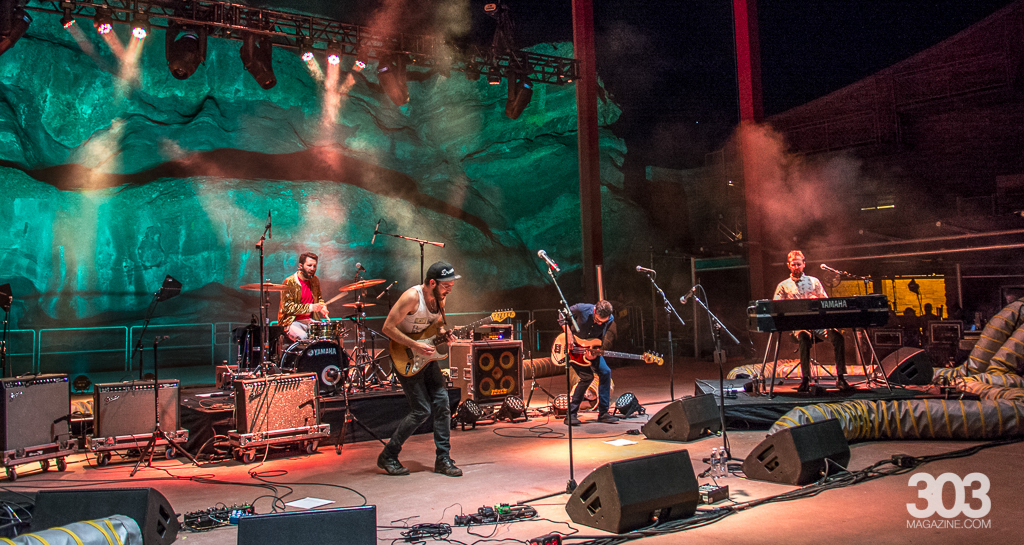 Bassist Joe Dart took a clean but simple bass solo. It got him several minutes of spotlight as the crowd chanted his name and clapped to the beat. This exhibited how skilled yet self-indulgent Vulpeck’s solos can come across. It’s not hard to imagine what Vulfpeck could do if they spent more time composing for a variety of pieces rather than solos.

Katzman led the sold-out crowd in a sing-a-long during “Christmas in L.A.” During the encore, Stanley came back out for “Birds of a Feather, We Rock Together.” Joey Dosik played keys and Katzman took the lower harmonies. Vulfpeck wrapped up the night with a few covers, including The Jackson 5’s “I Want You Back,” The Four Seasons’ “Oh What Night” and Earth, Wind and Fire’s “September,” that kept the crowd dancing into the night.