Review – St. Vincent Made Fear A Fantasy At The Fillmore

Staring into the abyss has never felt as pleasurable as when St. Vincent seduced us into it Monday night.  Stopping by the Fillmore Auditorium on the “Fear the Future Tour,” Annie Clark also known as St. Vincent was a vision of blistering tenacity and terrifying foresight, all without the aid of a band. Playing out like a modern Shakespearian tragedy, St. Vincent illustrated our collective downfalls in masochistic pleasure. The sheer spectacle of her intentions coming to fruition was nothing short of a triumph — a dispiriting one, but a triumph none the less.

Opening the show was long-performing couple, Tuck & Patti, who coincidentally are also St. Vincent’s aunt and uncle. As far as talent is concerned, it was immediately clear where the root of Clark’s prowess originated. Donning blindingly white ensembles, the couple looked as stunning as they sounded — Tuck meticulously plucking away at the guitar, as Patti’s soulful vocals careened over the chords. Fostering a delicate intimacy, the entire auditorium was hushed, marinating in the saccharine melodies the couple offered up. Hosting a bevy of covers from an absolutely mental cover of Stevie Wonder’s “Superstition” meticulously picked on the guitar to a moving rendition of “All Along the Watchtower,” Tuck & Patti, were phenomenal aperitifs to the visual feast St. Vincent had prepared for us. 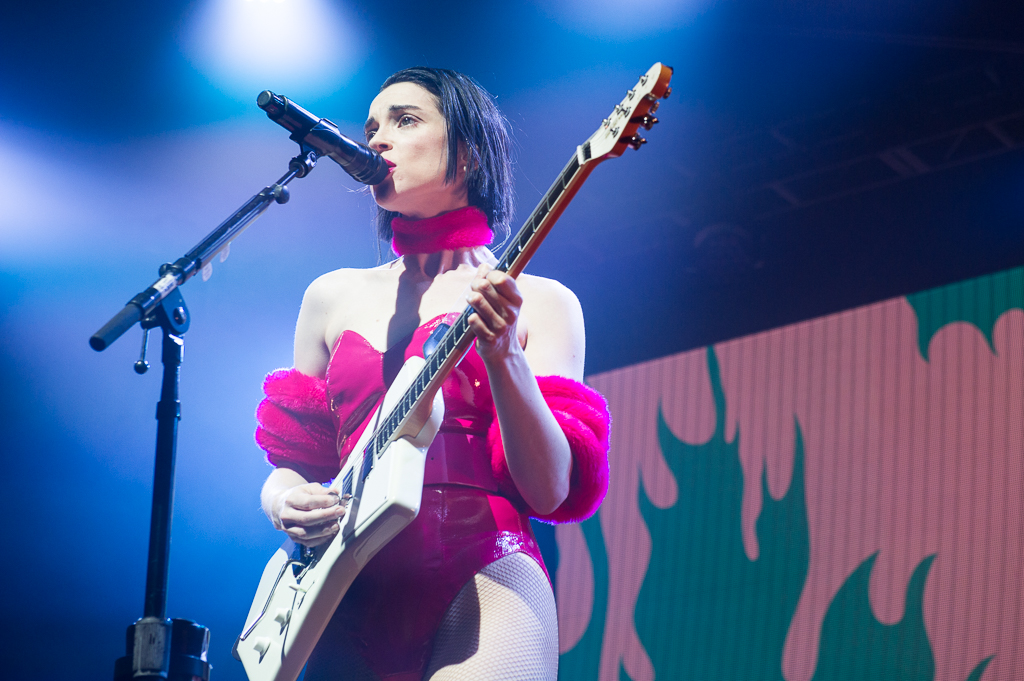 Striding out in pink latex lingerie and thigh-high boots between a thin crevice of the stage curtains, Annie Clark was as seductive as her aptly titled new album MASSEDUCTION would lead you to imagine. With a single spotlight casting its ray, Clark sang a positively dour rendition of “Marry Me” accompanied by a sparse string arrangement as the curtain parted for the first half of the show dubbed “Fear.” The first half of the performance was a highly choreographed career-spanning collection of songs. Against a relatively austere backdrop and with the aid of a backtrack and her guitar, Clark journeyed chronologically from 2007’s Marry Me to her 2015 self-titled opus. With fear being the underlying motif of the first half, Clark was sincere in conveying vulnerability and dread, particularly in songs like “Strange Mercy” and “Now Now.” The drama of it all served, in a sense, to underscore the precipitous downfall of Clark playing her own protagonist. As the house lights went down following the erratic “Birth in Reverse,” it felt as if the tethers holding Clark together had frayed. 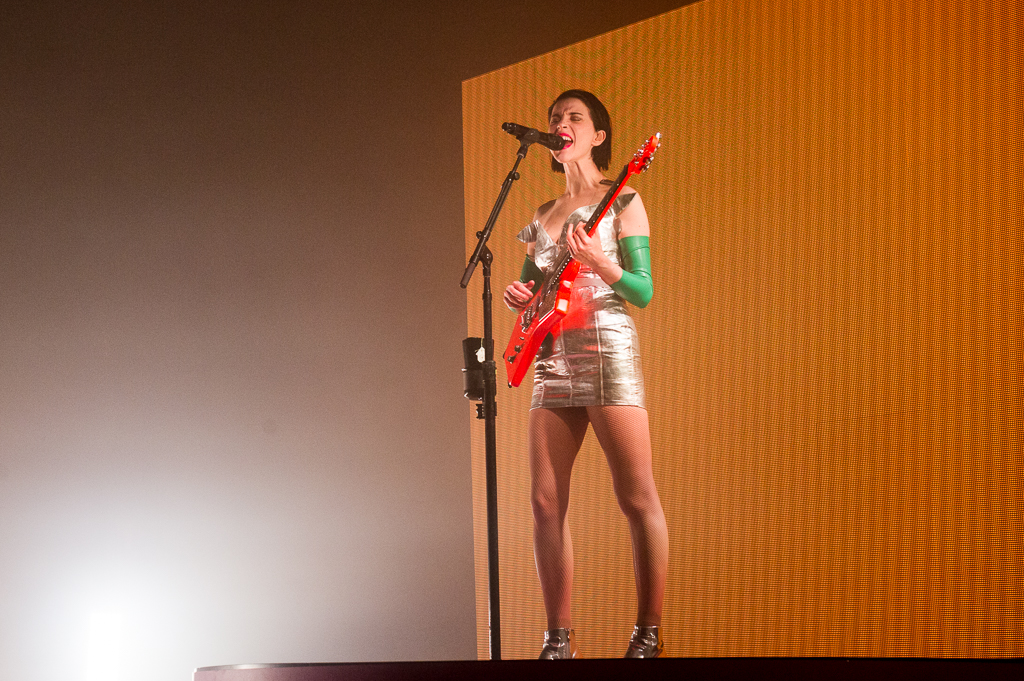 Returning to the stage in a green leotard for the second half of the performance, Clark crackled with a perverse vigor. Dubbed “Fantasy,” the second half of the performance was MASSEDUCTION performed in its entirety. Against a bright and bewildering LED screen looping disconcerting video clips, Clark performed as if the rapture was awaiting us. “Los Ageless” shimmered with ruminating discontent, while the floor fell out for “Happy Birthday, Johnny” and you could almost feel time stand still for “Slow Disco.” All the while, Clark masterfully pivoted from slithering guitar licks to soul barring confessions and barreling the audience down over heavy metallic beats. For as sobering as the first half appeared, the second was electrifying and dense — an overwhelming barrage of emotions. However, watching the performance spiral downward into such a vibrant pitfall was absolutely riveting. 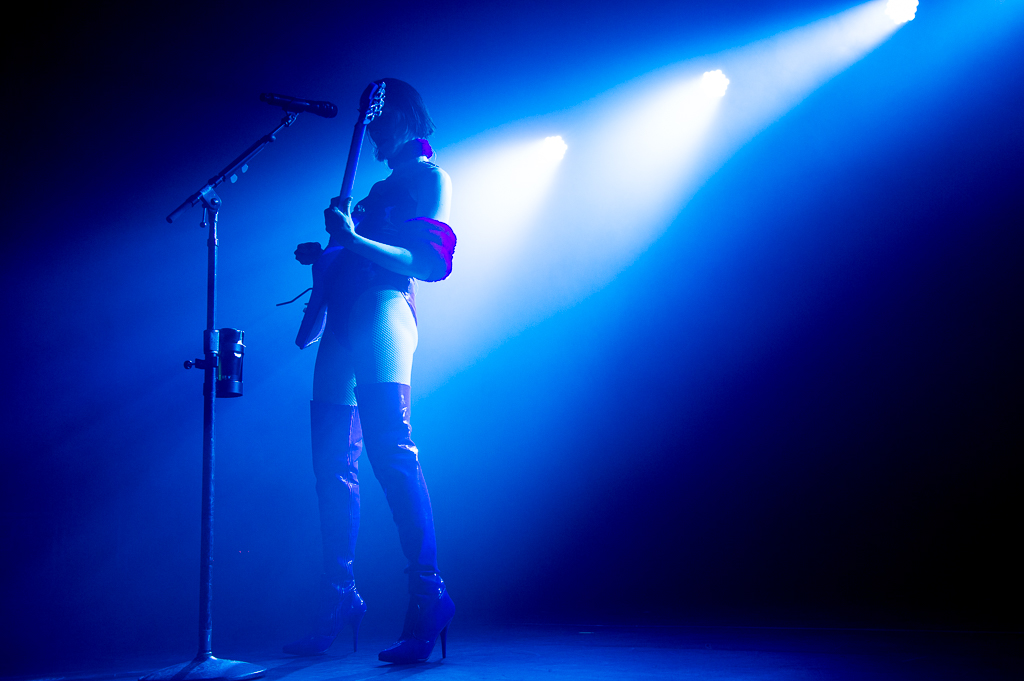 All photography by Glenn Ross. Check out our full gallery here. 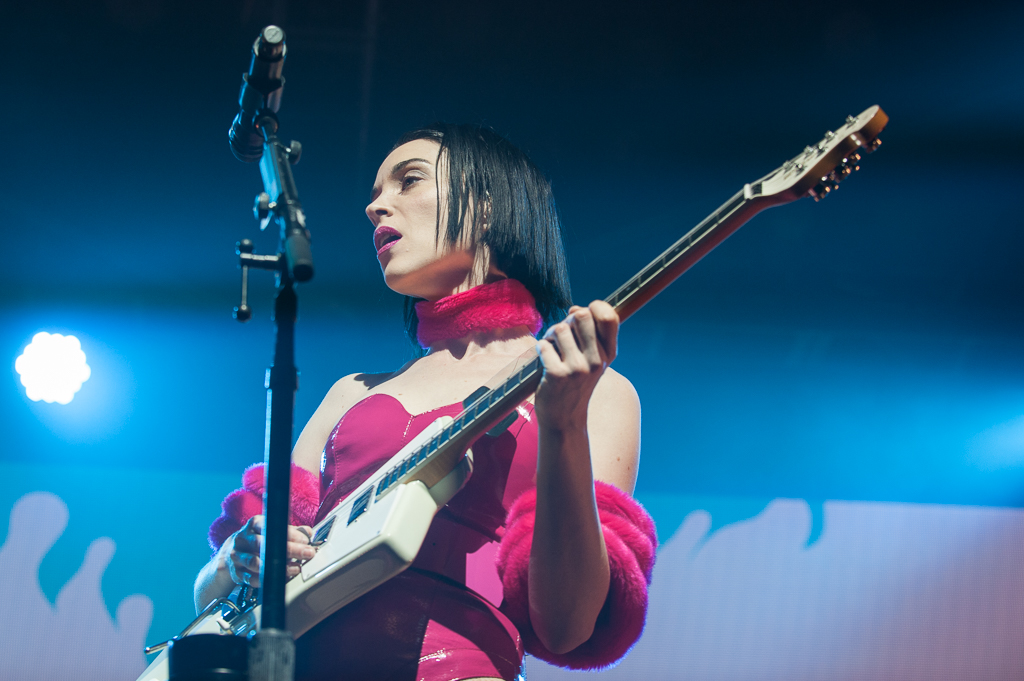