The Weeknd’s “Starboy World Tour” brought three staple artists of hip-hop to Denver’s Pepsi Center on Saturday night. Joining The Weeknd on the tour that follows his latest album, Starboy, was fellow Toronto and XO artist Nav and the king of the south Gucci Mane. The three men that this tour features, each have a dominant niche engrained in the music market. Nav is the new guy on the block, here to finish proving to those who may still doubt him that he is here to be a mega force. Gucci Mane, the undisputed king of trap, has had monumental accomplishments since being released from jail earlier this year, including multiple successful musical projects and becoming a New York Times Bestseller. Lastly, there was the main event, The Weeknd, who showed us he can perform in any fashion he wishes, and the people will still full-heartedly be in love with it.

Two years ago the producer and rapper Nav was one of the most well-heard mysteries within the music industry. His entire presence was once established with only a few songs on Soundcloud, each of which had at least a million views. Still, there was not much indication of what kind of traction his career was about to have, but it was obvious that he was not bound to be just another SoundCloud rapper who made it. Within no time, he was a feature on Travis Scott’s single “Beibs In The Trap” and he had released his first mixtape, self-titled, which featured The Weeknd on the track “Someway.” In July he released a co-produced album with Metro Boomin titled Perfect Timing. 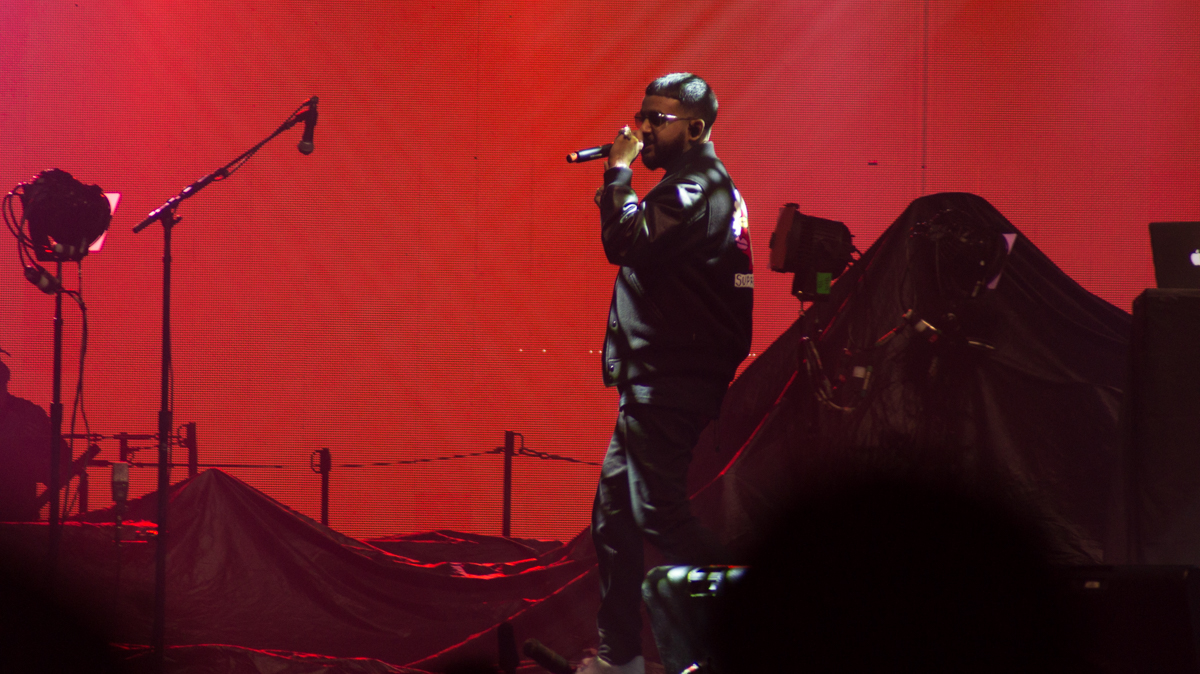 Nav introduced a formula of a minimalistic-presence based performance that each of the proceeding artists would follow. There was little animation, excitement or passion laced into their time on stage – Nav shuffled from left to right and back with a mic in his hand seeming never to have his focus set on a single particular thing. He seldom looked at a crowd that was present and entertained with the music, though there was little mutual connection shared between the two. The crowd was most responsive during his earliest hit “Myself.” Then the venue went black and the only light that remained came from a thick blanket of phones that speckled around the stage. When he didn’t rely on the crowd to sing during his vocal’s absence, he followed every word along with their echo. 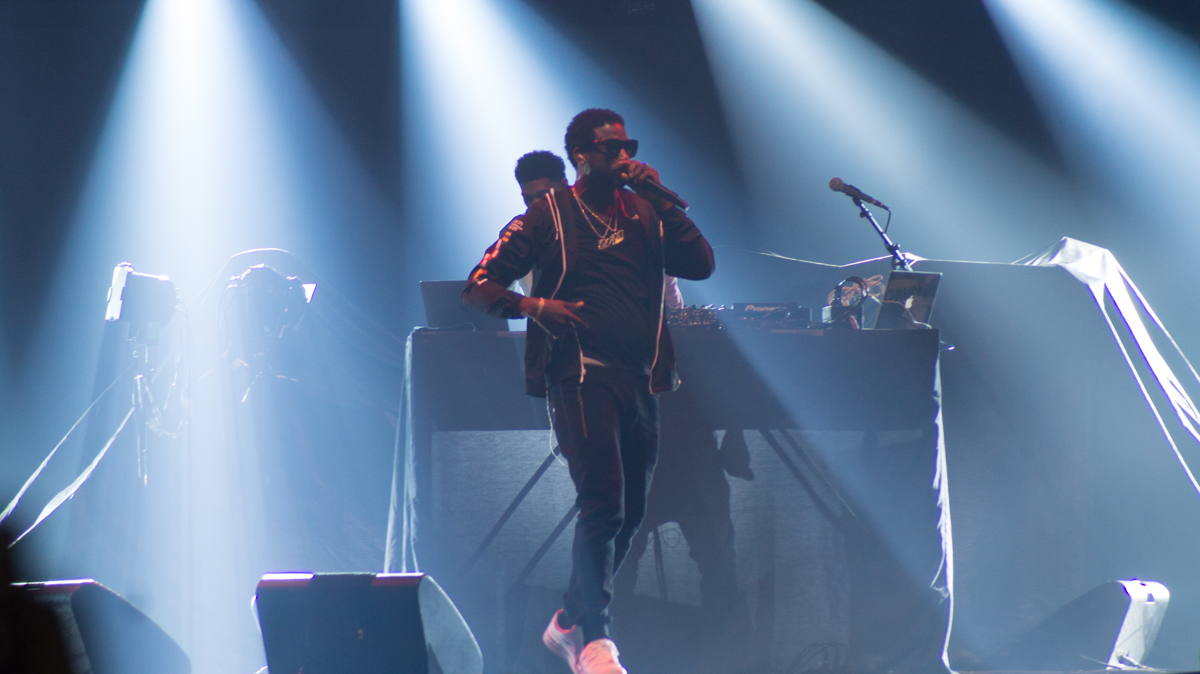 Though this was not Gucci’s show, nor did the heart of the crowd belong to the East Atlanta Trap God, the respect for the evening’s veteran was evident. Nothing he did was received without the respect that the real-life legend is owed. His setlist was composed heavily of his older-released classics such as “Lemonade” and “Wasted,” which rung out more of the crowd’s energy than any of his others. He gave the crowd a little more to grab onto than Nav’s performance had – he interacted with the fans that surrounded him and gave elementary motions as an incentive to dance along. When Gucci Mane left the stage he was immediately missed, but the crowd began their final shift of waiting for the person they had gathered to see. As one of the most relevant musicians today, the level of The Weeknd’s prestige exists exclusive to himself. He wins the major awards and headlines the biggest festivals — last night brought out an entire generation of listeners that knew every word to every song. 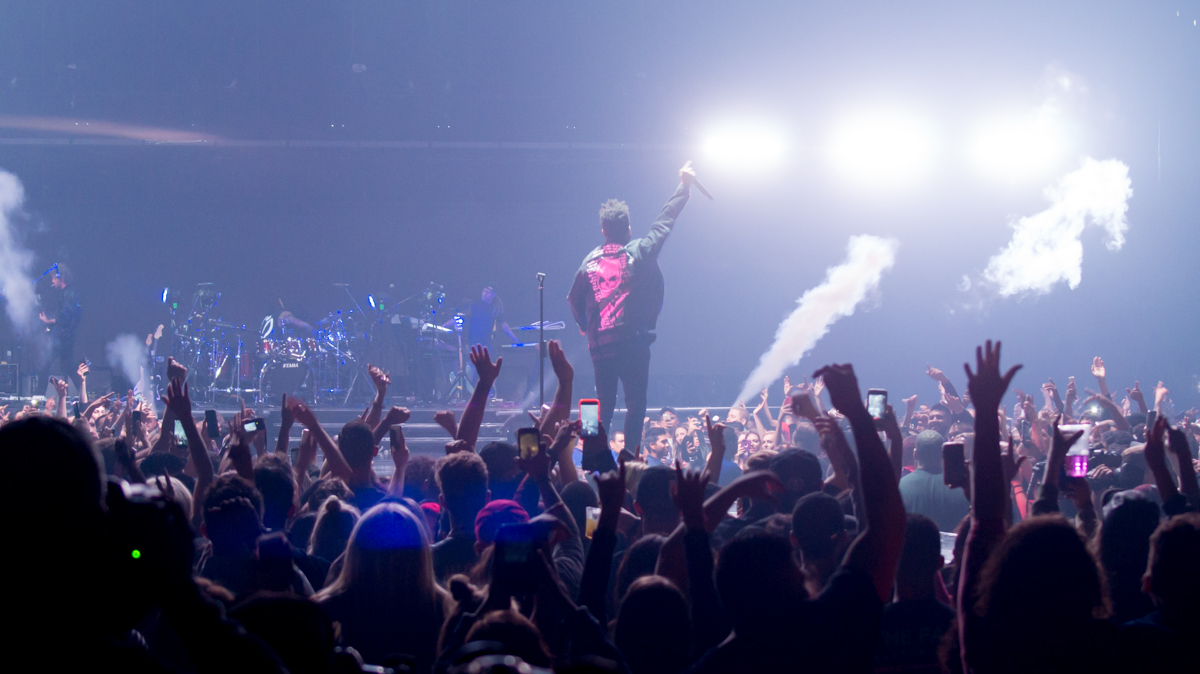 Nav and Gucci only had a two-dimensional stage with a backdrop of lights. For the headlining set, where the previous artists’ performed, now stood a three-person band in the forefront of an army or lights and lasers. There was one person to a play bass guitar and keyboard, another was behind drums and one played the guitar. The Weeknd emerged from the floor of a long peninsula that was attached to the main stage, that until now, had remained dark. What hovered above the Starboy was an enormous figure that must have been his mother ship. The structure protected lights and video, and would dramatically conform itself into new shapes. 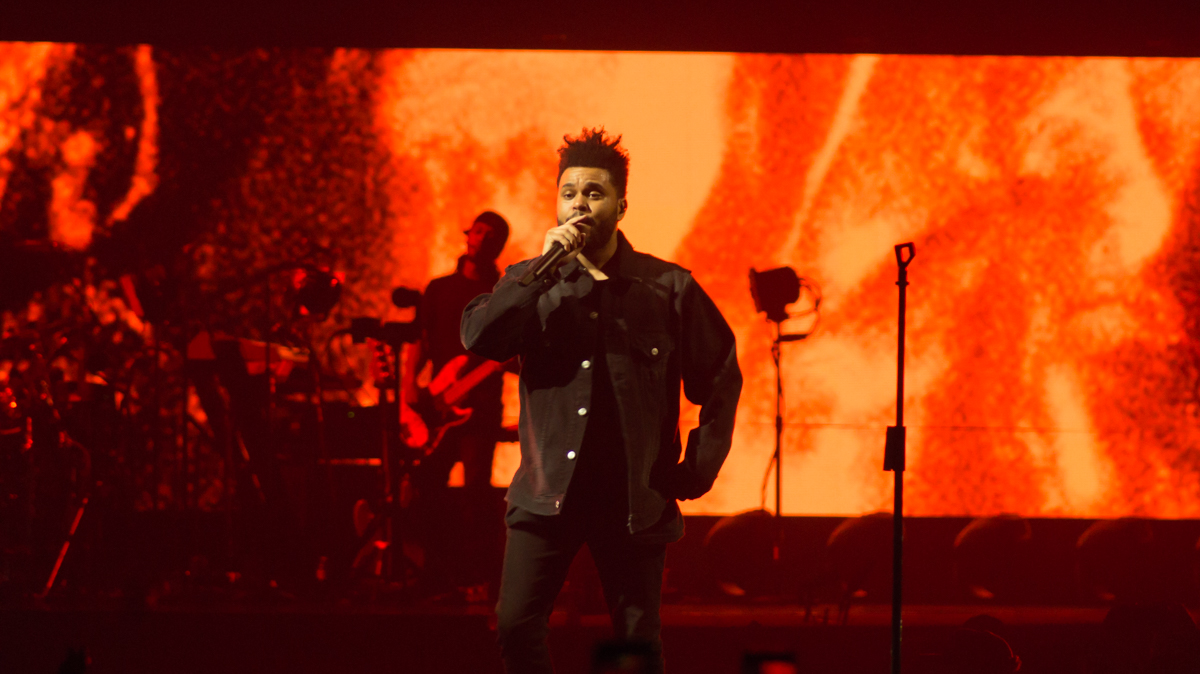 He began with his album’s title song “Starboy”. During his second song, he grew a smile as he happily accepted a fan-donated joint he found lying on the ground and placed it behind his ear. He shared his joy to be with everyone in Colorado, saying he couldn’t have his tour skip out, quickly calling Denver family. The tracks off of Starboy resonated well with fans – there wasn’t a song that didn’t begin and end with a roar of approval. Nonetheless, tracks off of his past album’s Beauty Behind The Madness and House Of Balloons — albums that have had the time to marinate into the lives and memories of his followers — jarred the largest reactions.Just as his voice and instrumentals fulfill the depths on his studio works, they did the same for his live show. Everyone came to see and hear him. The magnificent stage production was visually stunning, but his show would have been an equal success without it. It was like the crowd was under the hypnosis of an immortal, he had no animation to his performance – he slugged back and forth on the pier of the stage dragging the mic stand along with him. Any charisma he used to get the crowd additionally mobile was short-lived and half spirited limited to a rare fist pump or small leap. Yet everything still worked perfectly for him. For the entirety of his performance, the crowd stayed bound inside a rich euphoria, only wanting more.