Sherry Kent has baked pies almost every day for seven years in Granby, Colorado, and she’s not stopping anytime soon. Sure, you could buy a slice of pie at pretty much any bakery you can find — but it’s not quite like this. Kent takes the meaning of “homemade” up a notch.

Her restaurant, Showboat’s Drive By Pie, is quite literally her house. You can pull right up to Kent’s window to receive a slice of pie or a whole pie without ever leaving your vehicle. And it’s guaranteed to be fresh. 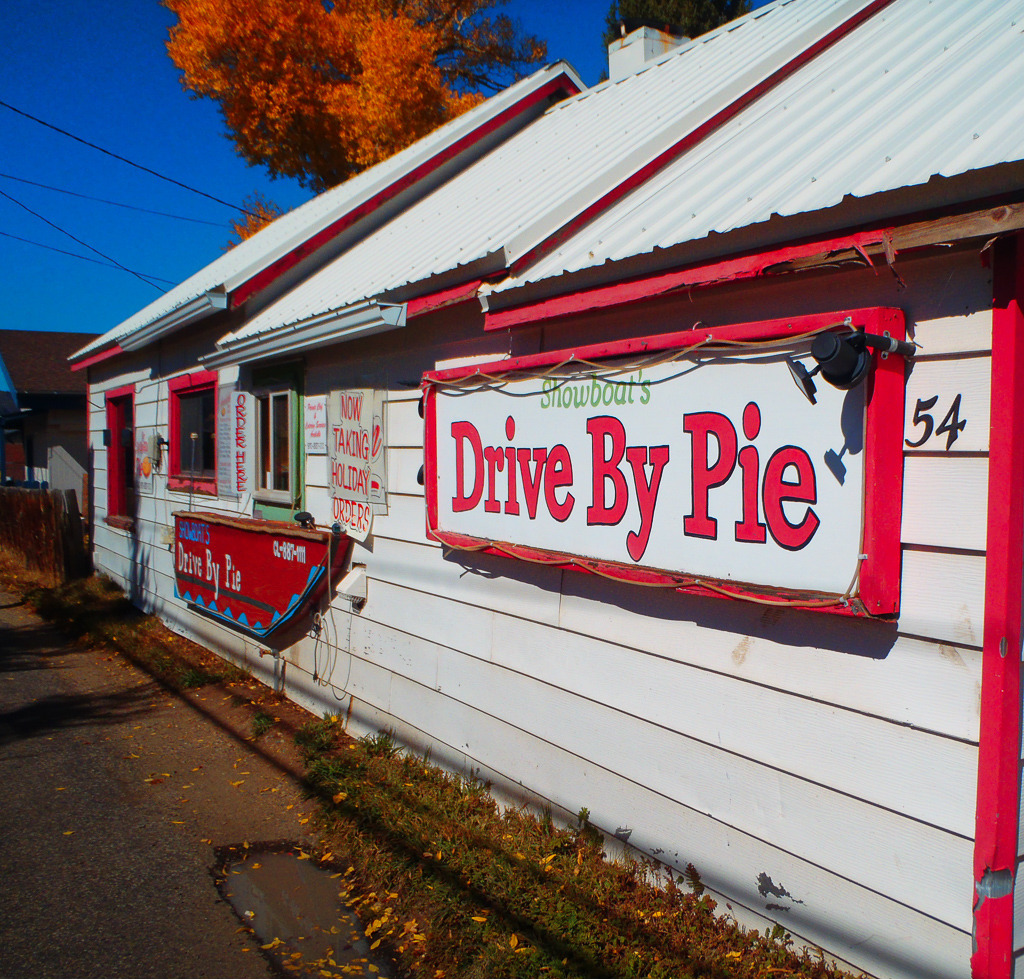 Located behind Liberty Bank in downtown Granby, Kent’s charming home is painted red and white and even displays a carving of a red boat on the side underneath the drive-thru window. According to Kent, the fancy Chris-Craft boats of Grand Lake Marina — the location where her first bakery opened in Colorado — inspired the restaurant’s name.

Kent, who moved to Granby in 1980, grew up near Traverse City, Michigan, and attended culinary school in Portland, Oregon. Now, she says she is never leaving Grand County — her real home.

Like most Colorado transplants, she moved out here for the skiing, and she prefers to keep a quiet life near the mountains away from the fancy city restaurants she trained to work in.

When Kent first moved to the Winter Park area to go skiing, she waited tables and then opened a small bakery inside a local Kum & Go gas station. Her “killer apple” pie alone helped pay off student debt from culinary school. That was when she understood the power of pie.

“I don’t understand the phenomenon of pie, but I’m really grateful for it,” she explained. 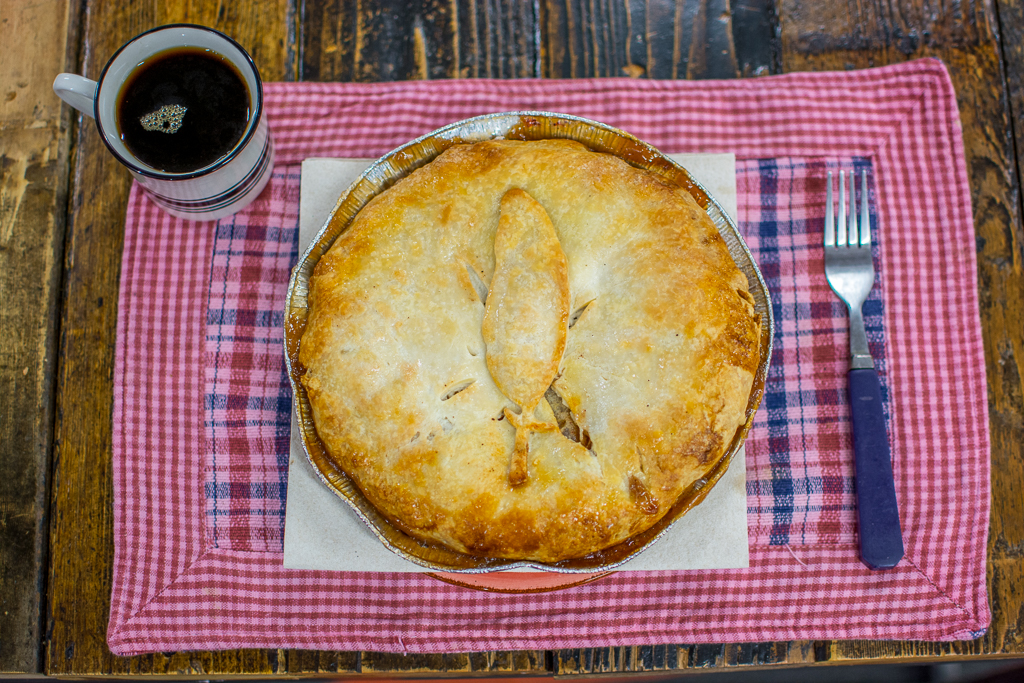 For some, making pies every day sounds like a lot of work, but for Kent, it comes naturally. “Pie’s not that hard. It’s not hard to make. It’s the hours that are the hardest part,” she said.

Although she won’t reveal ingredients, Kent’s pie flavors tend to stay simple and each pie’s ingredients are carefully measured before the pie is baked and weighed. “I think consistency is the thing that keeps you in business,” said Kent. “You have to maintain it. I always want you to have the same experience.”

And customers keep coming back. Kent believes her success is owed to her understanding of good service and quality, rather than showy advertising and expensive venues. Her laidback lifestyle transfers to the way she runs her business, and she prefers to remain mostly anonymous in the culinary world — that’s why you won’t see a photo of her today. 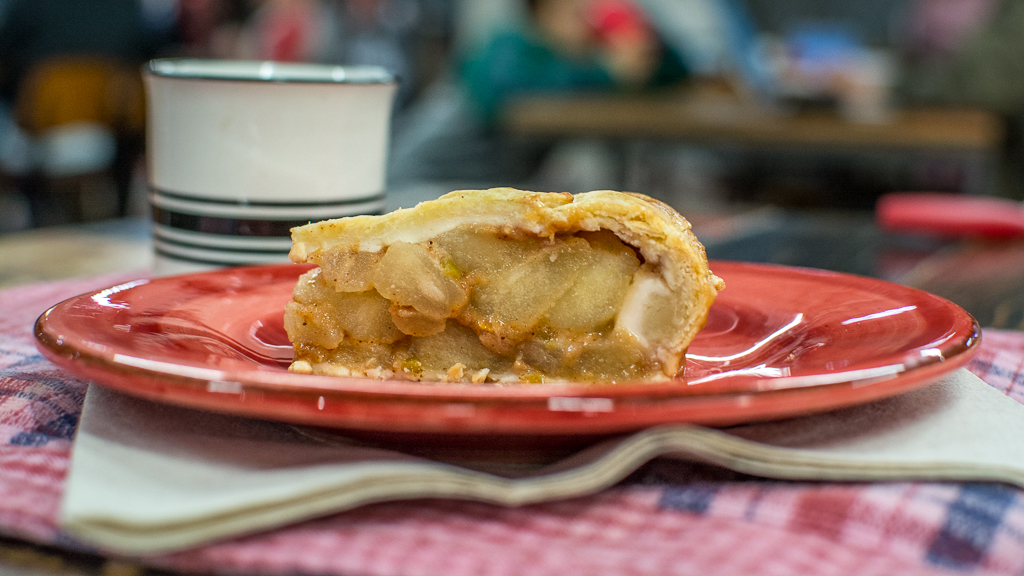 As for the pies themselves, they’re always in high demand despite Kent’s low profile, and after trying one it’s easy to understand why. With flavors such as her signature killer apple, an exotic green chile-apple, mixed berry, wild Maine blueberry, cherry, chocolate pecan and pumpkin, Kent’s pies are mouth-watering and perfect for a cold day after skiing or on a hot summer’s day picnicking in the mountains.

“I think good pie is here to stay,” she said.

There are always pies available, but Kent advises that you make orders 24-48 hours in advance—that way the pie is ready when you arrive. Prices range from $5 for the slice of the day and $28-$45 for a whole pie. Kent also sells cinnamon raisin bread at $7 for a small loaf and $10 for a large loaf, and it is available for catering and private chef services. Showboat’s Drive-By Pie is open from 12-6 p.m. everyday in the summer and Thursday through Monday in the winter.