Few bands today are able to enjoy the sheer scale of critical acclaim that Arcade Fire has. So much so, that excellence in respect to their artistic output is almost universally predictable. Their latest album, Everything Now, however, serves to nearly denounce the “critical darling” tag that’s been synonymous with their namesake. While the album isn’t bad per say, it does, however, lack the emotional magnitude and the fully realized concepts that pepper many of their past albums. But, that’s the point. Everything Now, as well as its well-publicized marketing campaign, finds the band treading less water, and rather, breaking the restraints of preconceived notions and expectation. If the concept behind the album is a shot at blind consumerism and our desire for immediate gratification, the resulting effect for Arcade Fire was freedom.

Furthermore, arriving in Denver for the “Infinite Content Tour” on Wednesday night, Arcade Fire cut through the static noise, delivering on their premise of unpredictability, while offering a singular statement on the band they wanted to be— not the band we expected them to be. 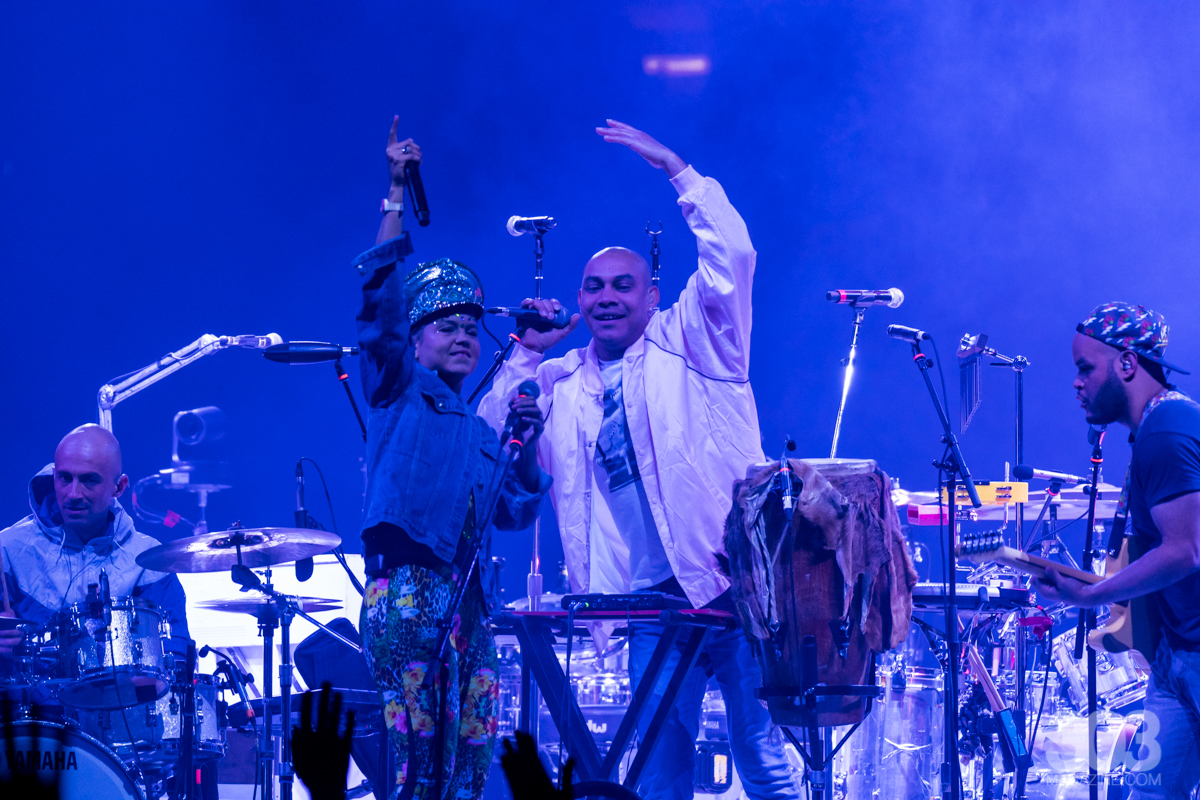 Coinciding with the theme of unpredictability, Arcade Fire appointed Colombian experimental electronic group Bomba Estéreo to open the show. All of five seconds into their first song, Bomba Estéreo had the audience wrapped in their grip of EDM-tinged Latin grooves. Lead singer Liliana Saumet served as the host of Bomba Estéreo’s party, bouncing around the stage (in the round) injecting a gasoline tank’s worth of adrenaline into the audience. The band’s endless high energy and charisma resembled that of Major Lazer — if they actually played live instruments and collectively shotgunned a Red Bull before going onstage.

Throughout their performance, you could glean the crowd’s unanticipated excitement from all corners of the arena. Even more amazing was the fact that every single song was sung entirely in Spanish. Whether the majority of the audience understood or not, the sounds coming from Bomba Estéreo crossed borders effortlessly. 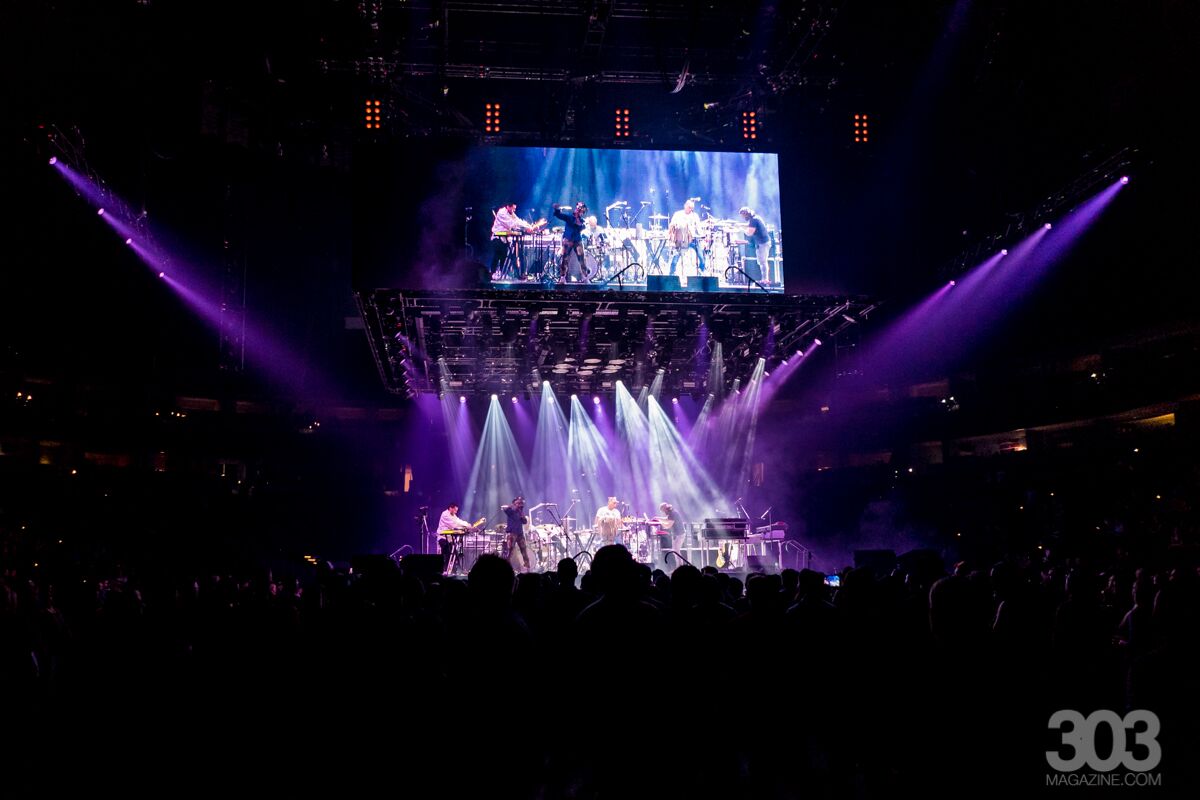 Prior to the start of Arcade Fire, during the set changeover, random symbols circled the arena and a cowboy with a constellation for a face shouted nonsensical PSAs from the video screens. Below, the crew was setting up what appeared to be the concert inside of a boxing ring. When all was said and done, a spotlight hit the corner of the area, where athletes typically enter, a deep voice announcer resounded from the speakers, and Arcade Fire entered the arena like champions. 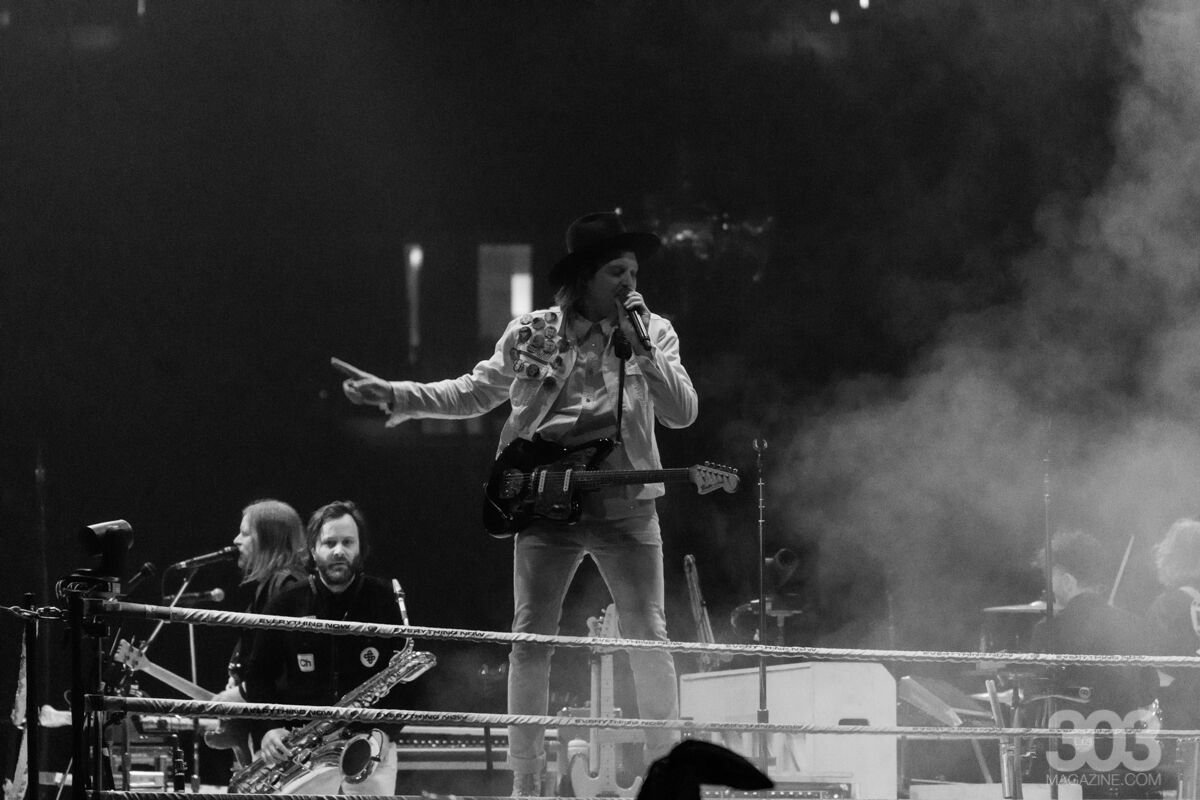 Beginning their set with “Everything Now” while perched in the round as two giant disco balls descended from the rafters, it was evident this wouldn’t be your average Arcade Fire show. From the jump, people were hollering and twirling wherever they were — whether in the nosebleeds of the arena or on the floor along the edge of the stage. Songs felt like they melted into other songs, all the while seamlessly tethered to an underlying disco groove. Having started the performance on a note of nonsense, the setlist managed to make perfect sense thematically and rhythmically. The newer material fell into place like puzzle pieces uniting the different career-spanning identities of Arcade Fire together. 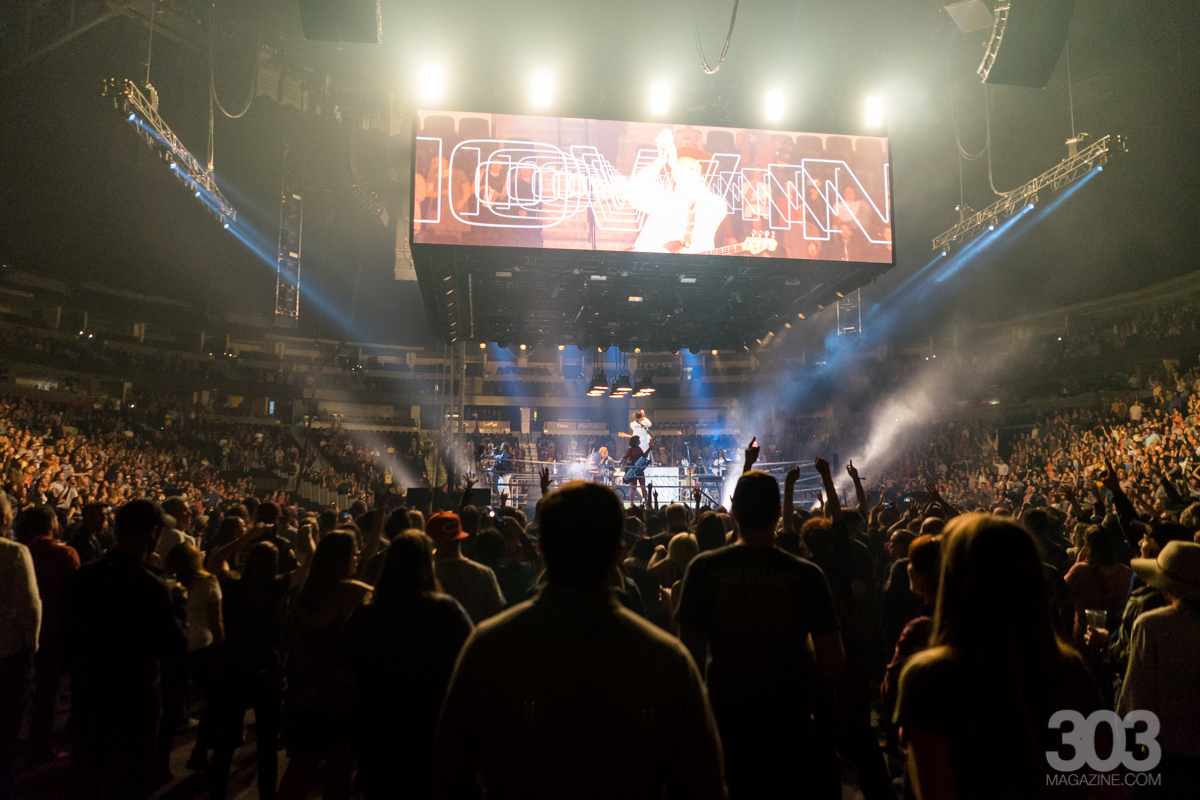 View of the round during Arcade Fire.

In addition to the immaculately upbeat flow of the show, the band’s actual performance in the round was a sight to behold. Performing “No Cars Go,” lights plunged down like prison bars around the stage before blasting up again leaving the audience shaken like rabbits in the headlights. “The Suburbs” reimagined the fateful music video with marquee facade outlining the footage of the band performing, capturing the melancholy of the track and thrusting it back at the audience. Régine Chassagne’s solo fronted “Sprawl II (Mountains Beyond Mountains” filled the arena with diffracted light that seemed to reflect off every surface, completing the transition of the Pepsi Center into a full-fledged discothèque. All the while, the band would jump around, roll across the stage, climb platforms and play until the instruments in their hands threatened to break apart in their hands. They even performed “Modern Man” for the first time since 2011. If there was ever a moment to be struck down by the power of music, it was right there in that arena. 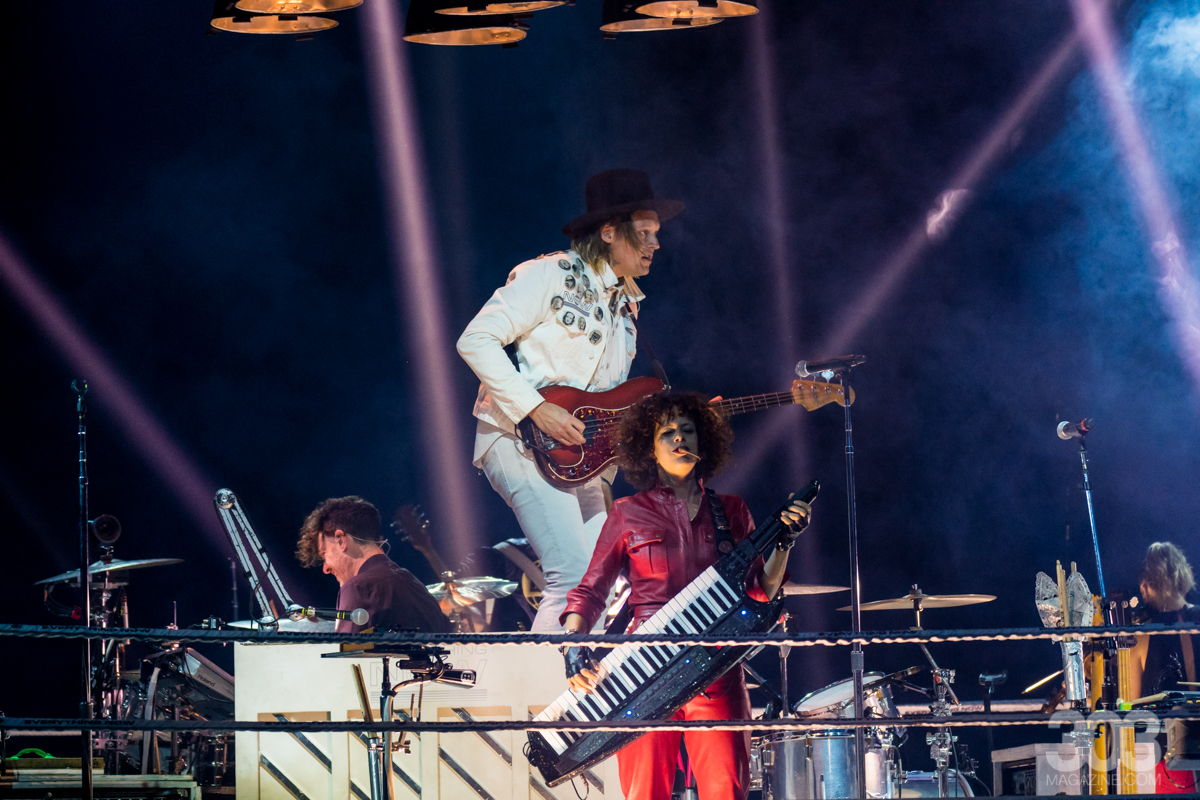 Arcade Fire is no longer the obscure indie band pumping out heartfelt anthems, they’ve evolved to a point of being so much more. While connecting with critics and donning their acclaim like a heart on their sleeve may no longer appeal to them, they’ve managed to create something that connects people in a way few musicians can. Their music touches on human nature in an undeniably tangible way, the effect of which creates a bond that transcends all types of barriers. Furthermore, the band we expected to only play the indie rock anthems didn’t show up, however, the band that hits you where it counts did, and we were better for it.

All photography by Meg O’ Neill.