At the intersection of scratch-to-table and fine-dining and nestled into the front of Aurora’s new, food-driven Stanley Marketplace, awaits one of Denver’s newest, burgeoning eateries. From the wall of windows and modest wooden tables to the subtle poppy motifs scattered throughout the restaurant and splashed across the artwork created by the owner’s grandfather — this modern gastropub has found the perfect balance between tasteful understatement and elegance in all of its elements, even down to its name.

“[Annette was my aunt and] was just a really strong, opinionated woman that I always looked up to, and her name is really beautiful, so I just thought it fit the space really well. But it also encompasses — I think — what we’re doing here and kind of tells a story,” said Caroline Glover — founder, owner and head chef of Annette.

“I think she would’ve loved […the restaurant] — she wasn’t super adventurous when it came to food, so I’m not totally sure if she would love the food here — but she would like the martini and the deviled eggs.” 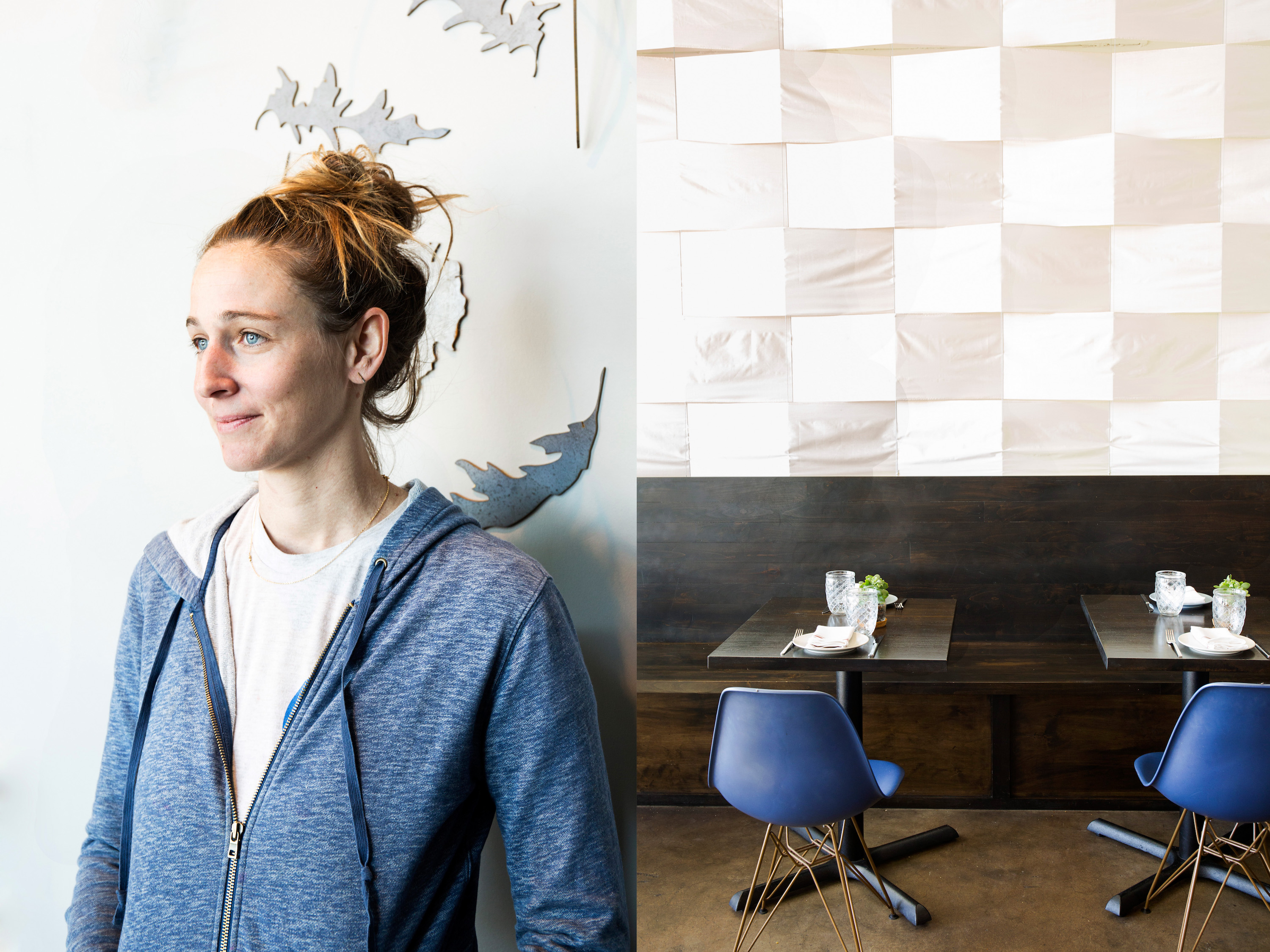 At Annette, simplicity is key, and quality trumps quantity — even when it comes to the staff. The whole restaurant, both front and back of the house, is fully run by only 18 people.

“We were so small when we opened, we wanted just a really small crew and it’s become a bit more of a beast than I thought it would be,” Glover explained. “I feel like everybody wears a lot of hats here and the three of us wear the most.”

Dan Seibel — who manages front of house and service standards — agreed. “Even if you’re serving that night — you’re probably going to make a drink at some point,” he said, laughing.

Collectively, the crew brings experience from a variety of high-end, fine-dining and smaller, more intimate restaurant venues — names like The Spotted Pig in New York, Oak at 14th in Boulder and Old Major, in Denver — as well as backgrounds in hospitality and management. The outstanding crew of three is made of Glover, Seibel and Glover’s sous chef, Chelsey Maschhoff. The three met while working at RiNo’s eclectic Acorn restaurant over three years ago before coming together to open Annette.

“I think all of that has kind of built what Annette is — working at some larger places and Michelin star places and smaller, more intimate [ones] and then just kind of taking what I liked from each of those places and then [creating] this,” Glover elaborated.

It’s evident that a large part of the restaurant’s success stems from the symbiosis and closeness of the three — who characterize the place as melding together the best elements of coziness, humility and family.

Apart from the impressiveness of the new restaurant’s already apparent eminence, there’s something to be said about the silent strength Annette’s kitchen has in being led by two females — something not commonly seen in the restaurant world. 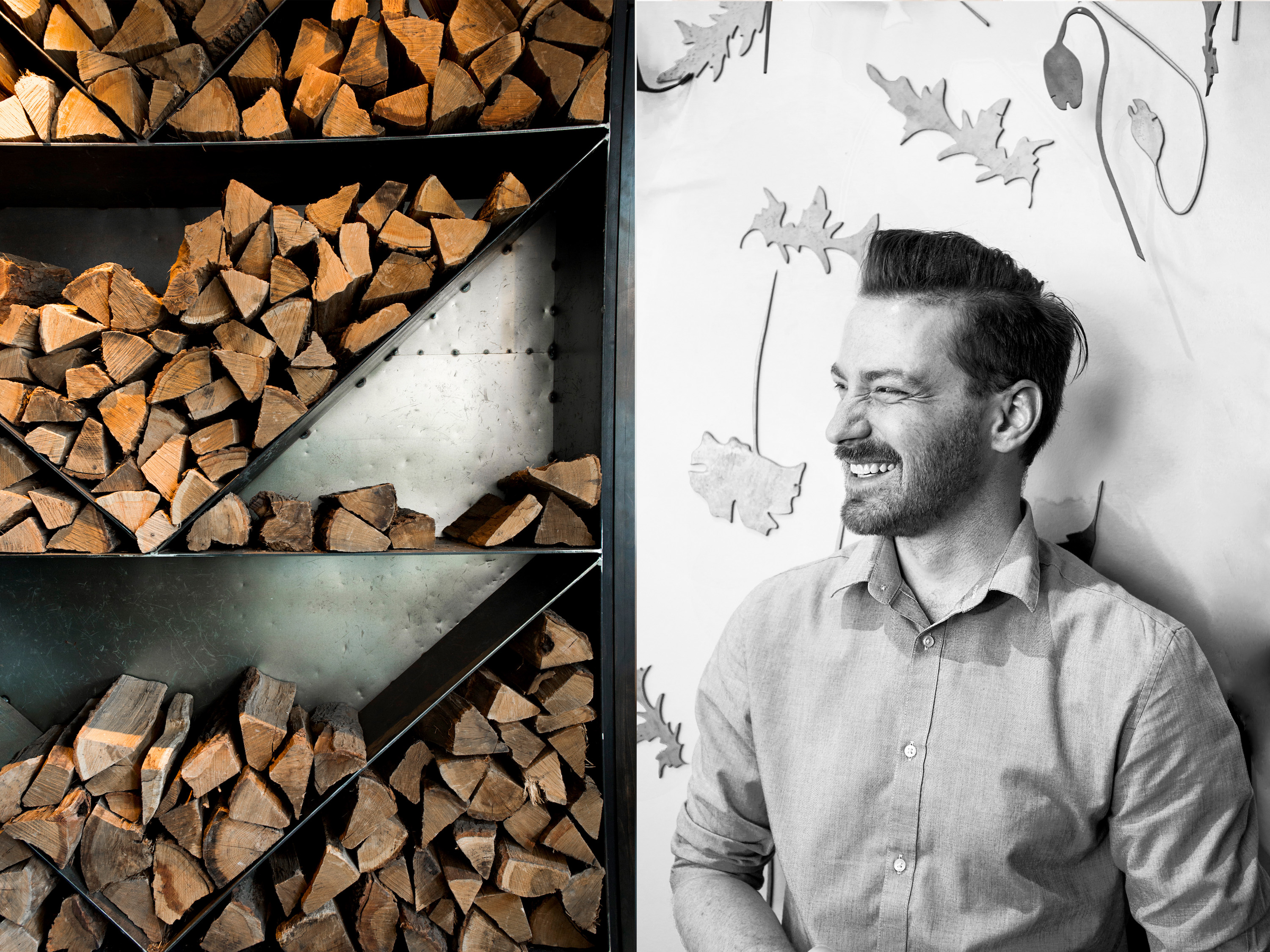 Dan Seibel — manager of front of house and service standards at Annette.

“It’s great to always have guys and girls in the kitchen, but I think for me personally, having a woman sous chef makes it easier,” Glover explained. “I think our palettes are different — a little bit more delicate — I think it comes through in our food. For me, it’s easier to work with a woman in the kitchen.”

“Our communication style is very much the same,” Maschhoff added. Apart from this synchronicity, Glover does not think it adds an additional edge to opening a new restaurant in Denver’s flourishing food world.

“I think opening a restaurant is just hard, you know?” Glover said. “I can’t imagine if you’re a man it’d be any easier. There are so many elements you just don’t even think about. I imagine all around it’s just hard.”

The open, airy bistro has graced its space at the Stanley Marketplace for just over seven months, inviting patrons — and the large family of regulars the restaurant maintains — for happy hour, brunch and dinner. The restaurant recently decided to remove its lunch menu.

“It narrows down to sustainability to us; we couldn’t sustain a great dinner and a great lunch. I think it will be great to revisit it,” Maschhoff explained of the decision; but fret not, the bistro’s remaining dishes are well worth the visit.

Annette provides the perfect undertones of nostalgia in all of its modern American cuisine, allowing its plates — and the respective delicate palatableness of its authentic, fresh ingredients — to speak for themselves. The scratch-to-table haven offers courses with “familiar flavors done in a different way,” to the likes of spiced lentils and burrata with arugula, lemon and carrot crisps, grilled carrots and peas with cilantro, charred orange and spiced cream, and if you’re really adventurous — grilled beef tongue with pickled beet relish, parsley and marrow toast. 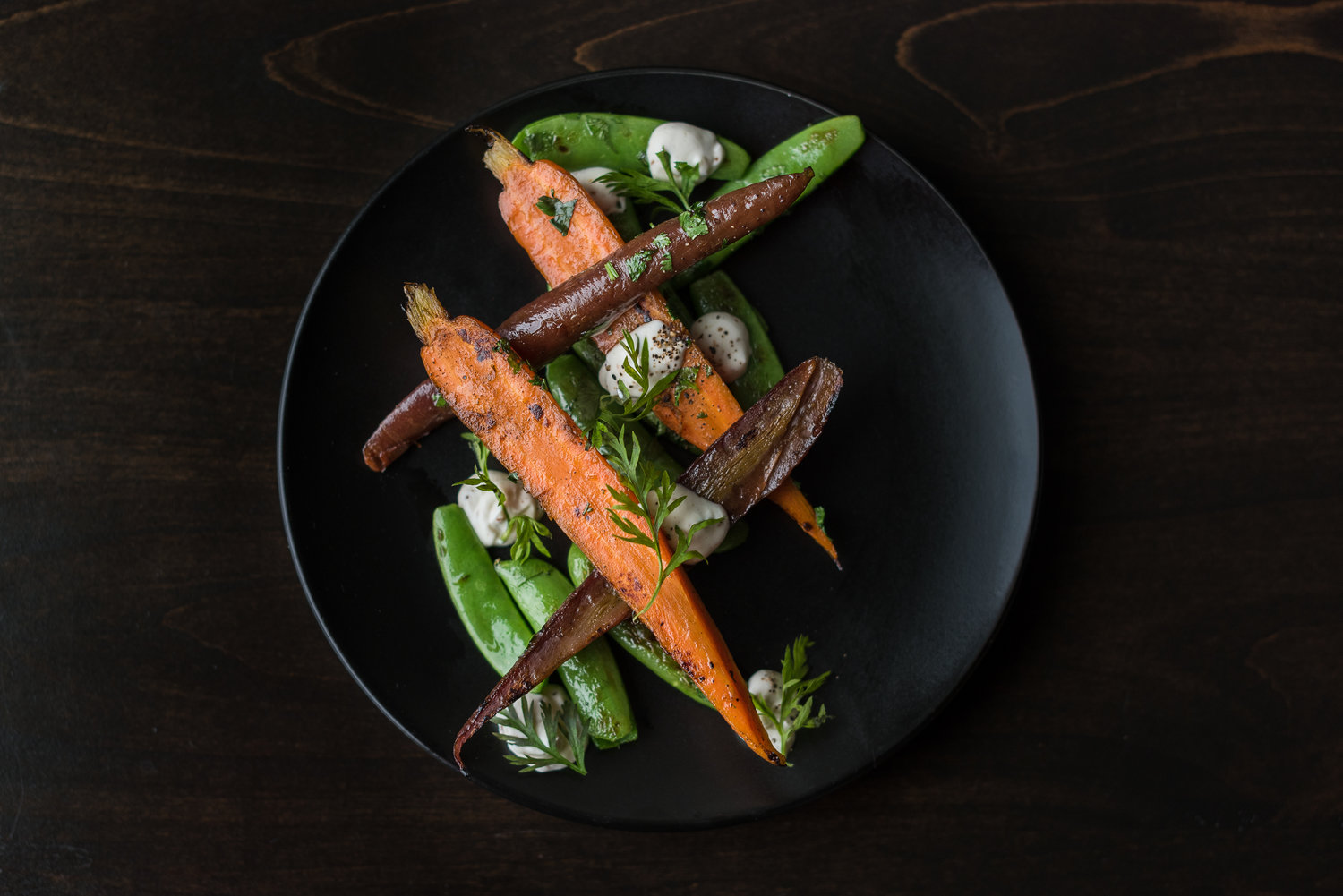 Small plates range from $3 to 15, dinner plates from $11 to 36 and brunch from $12 to 14. This is a great place to truly relish in the meaning of elevated comfort food, family style.

“Simple is key here. Everything is really simple. […] There’s a lot of places that […] put 20 ingredients on the plate and I think the star gets lost. We try our best to go with what’s in season and we start there and we think of flavors that are nostalgic or that we’ve had a lot and try to go from there,” Glover said.

As the start of fall rolls around, the team is excited to rotate dishes back in from the colder months, getting the opportunity to revisit menu items from when they first opened. The chefs make an effort to stay with what’s in season, rotating the culinary lineup accordingly — including the cocktail menu, which they also keep in close line with the kitchen.

While the farm-to-table — not to be confused with the scratch-to-table movement (which still involves sourcing the freshest ingredients as locally as possible, but not always 100% of the time from farms within a 100-mile radius) has been very apparent in food culture as of late, it is still has provided a bit of challenge for the Annette family to get customers to dive in fully from the start.

“I don’t think we’re doing anything crazy here, but I think, you know, we have a small menu and we’re kind of — I don’t want to say forcing but — encouraging people to try new things and be okay with 15 options rather than 35,” Glover explained.

Maschhoff furthered, “That initial click is hard, but once it clicks — it clicks.”

And that much is clear. Last month, the restaurant received the news that it was voted one of Bon Appetit’s Top 50 Best New Restaurants.

“[You have to] punch yourself, you still don’t believe it, it doesn’t seem real,” Maschhoff said. “Because other restaurants get that; you don’t think the place that you’ve put all your blood, sweat and tears will come to fruition.” 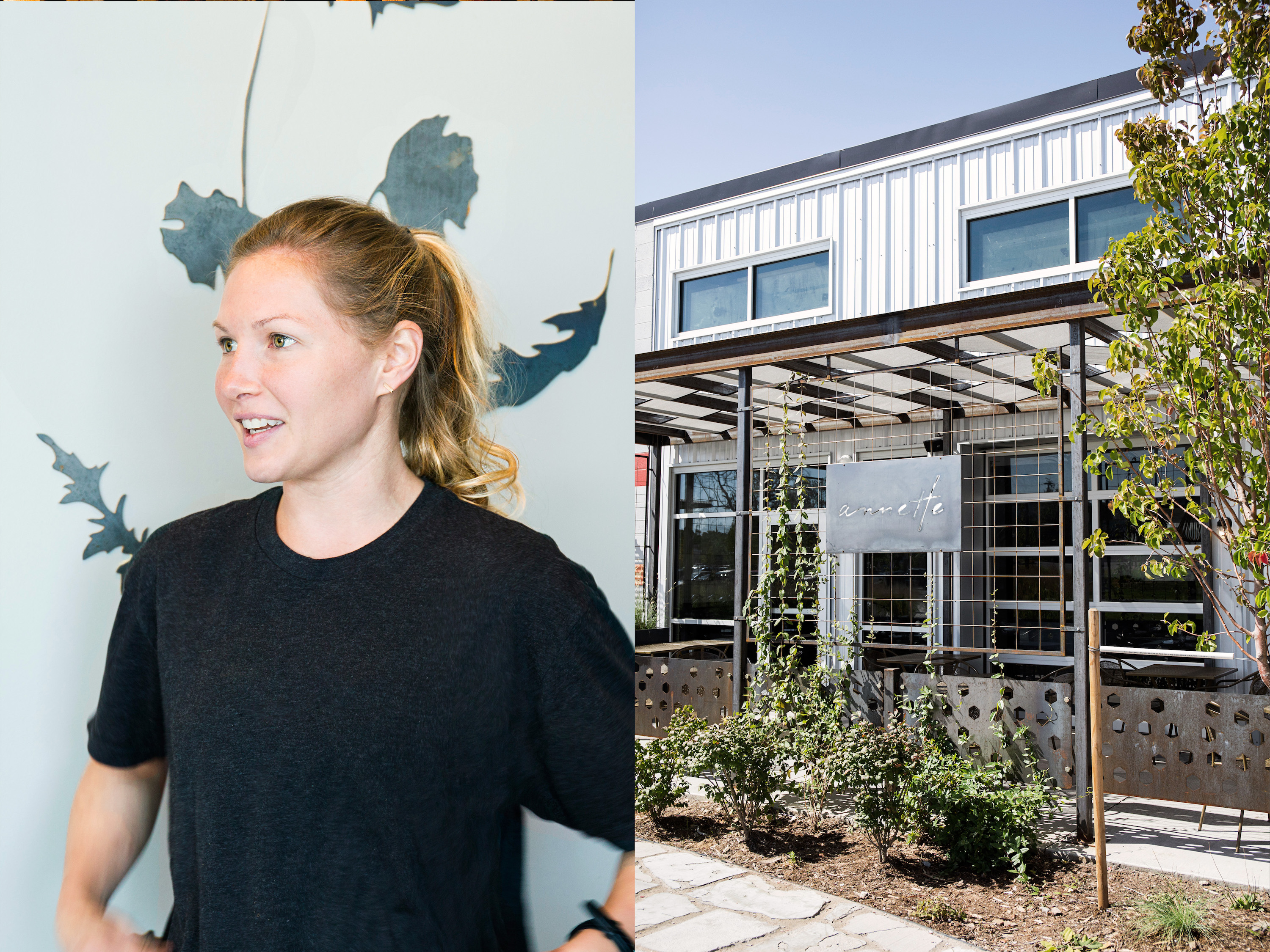 Glover described the moment as “surreal,” recalling how her excitement was almost trumped by the anticipation of the crowd and pressure it would invite, moving the restaurant into “a different league.”

As for the future, Glover says she takes things day by day. She’s open to the possibility of moving locations one day or trying out a different concept — but has no plans to move or open a second location anytime soon.

“I think this place offers so much more, and we’re just beginning to scratch the surface on it,” Maschhoff explained. Her outlook on the future is an exciting one. “I’m not even worried about planning what’s next because what’s next is, ‘What’s new on the menu?’”

With Autumn Hours, Annette is open for happy hour from 3 until 5 p.m. and dinner 5 to 10 p.m. The team serves brunch on the weekends from 10 a.m. until 3 p.m. and are closed Sunday nights and Mondays. Find Annette at 2501 Dallas Street, Aurora.