Review – Washed Out Kept It Mellow At The Ogden

There was something in the air that fueled the contact high of Washed Out’s performance at the Ogden Theatre. The feeling of teetering between euphoria and reality was ever present as was the inevitable come down that would follow. It’s fitting though, as The Mister Mellow Tour hit the Mile High City and Washed Out managed to carve a space in-between the high and the come down, to take it all in and mellow out for a moment.

Donning an all white outfit and standing at the forefront of a massive projector screen, Ernest Greene — otherwise known as Washed Out — took to the task of recreating The Mister Mellow Show, the visual companion to his most recent album Mister Mellow. As the intro track “Title Card” and the stop-motion album art began filling the screen, the band was figuratively washed away. In their place were hallucinatory animations, vanishing collages of faceless people and swirling retro palettes of color in what seemed like an endless departure of identity. In an instance of art imitating life and with the aid of several Xbox Kinects, Greene’s silhouette danced along with him in staggered hues. Elsewhere in the show, figures derived from old ’60s stock footage were masked by animated smiley faces as they frolicked around passing the time, disappearing and reappearing again in accordance with the music. Sight and sound met at the junction of singularity where no one was anyone, not even the band. It was much the same in the audience — anonymous people filled the voids grooving in their own space.

Where some musicians reside in public persona, Washed Out has never subscribed to the notion. Greene himself doesn’t appear in any of his album art, videos and his voice, when it appears on a track, is soaked in echoes and reverb as if begging the listener to get rapt in the music itself and not linger on the person behind it. The Mister Mellow Tour in concept is the culmination of such efforts over the years, where anonymity unites us and our ability to empathize with each other defines us.

Washed Out’s performance of “Hard To Say Goodbye,” may have been the show’s focal point. Appearing midway through the set, the visuals opened to an unidentifiable man wandering through a bustling city in solitude. As the many people who pass him and as many hours pass by, the man remained alone. The upbeat yet somber house track, left an indelible impression, as the man could have been anybody and nobody at the same time. Seeing the dichotomy of dancing bodies against the gloomy video and track was disarming, but incredibly effective to the idea of Mister Mellow. 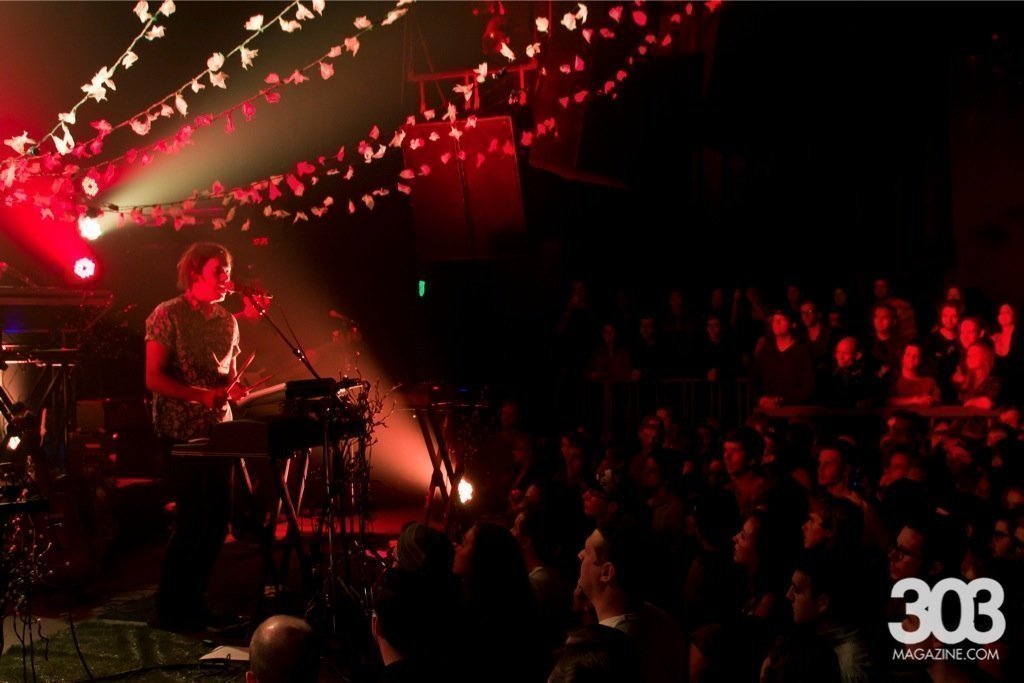 Washed Out performing at the Fox Theatre in 2013. Photo By Adam Ripplinger

The Mister Mellow Tour has less to do with a specific person and more a state of being — a complacency with the emotions of being in-between. Whether it’s dancing to the blissed-out disparity of “Amor Fati” or the dysphoric escapism of “Burn Out Blues,” Washed Out managed to wrangle the emotions that are difficult to express, and convey them in a flurry of sounds and sights, reaching a point of willful cooperation to “go with the flow.” In fact, when the band eventually played their song “Get Lost” and the text, “take a hit and get lost,” flashed across the screen, we were halfway there.