Back to School is an August series covering some of Colorado’s most interesting advocates and educators in the food space — stay tuned for more features all month long.

Just about an hour’s drive from Denver, through Boulder and into the rolling hills that hedge the start of the town of Lyons, lies a local haven —The Farmette.

Mike and Betsy Burton, Farmette owners and local fare perusers and growers, have led these beautiful farm-to-table dinners for several years now — whose corresponding cadence of “living from the land” is one that has been a part of their own lifestyle for decades now.

“Probably, what I think are the best parts [of farm life are what] most people would think are the worst. I love to get up early and walk around before anyone else is up. I’m up there cleaning stalls and racking poop and being with my alpacas. I love it. I love it. The others, [the rest of the crew], are out there working long hours and enjoying each others’ company […] It’s all about attitude and doing what you love. And we’re lucky enough to have that here.” Betsy Burton said fondly.

Yet, unlike the more recently denoted “trend” in the culinary world, this movement — one that supports and promotes the acquisition and sourcing of local produce, meats and even labor for food — is not new to the dinner’s hosts. But they do hope that the rest of the community will not see it as just a trend.

“It definitely contributes to the education of farms and eating healthier and beautiful food, but I think some people think it’s a trend and they’ll come and they go; but deep down, I think it’s very helpful to make people aware of a lot of different things from food to community,” Burton explained.

While the food industry and culinary world have seemed to only more recently jumped aboard the “farm to table trend” — many families, farms and restaurants — some of which are already well known and loved by the Colorado community, have already been quietly serving up exactly that for quite some time. Boulder bistro Salt, the Kitchen family, The Cork,  Fruition and Mercantile are just a few of the Boulder/Denver restaurants that have been plating this scheme of food off the radar for years — The Cork for more than four decades. 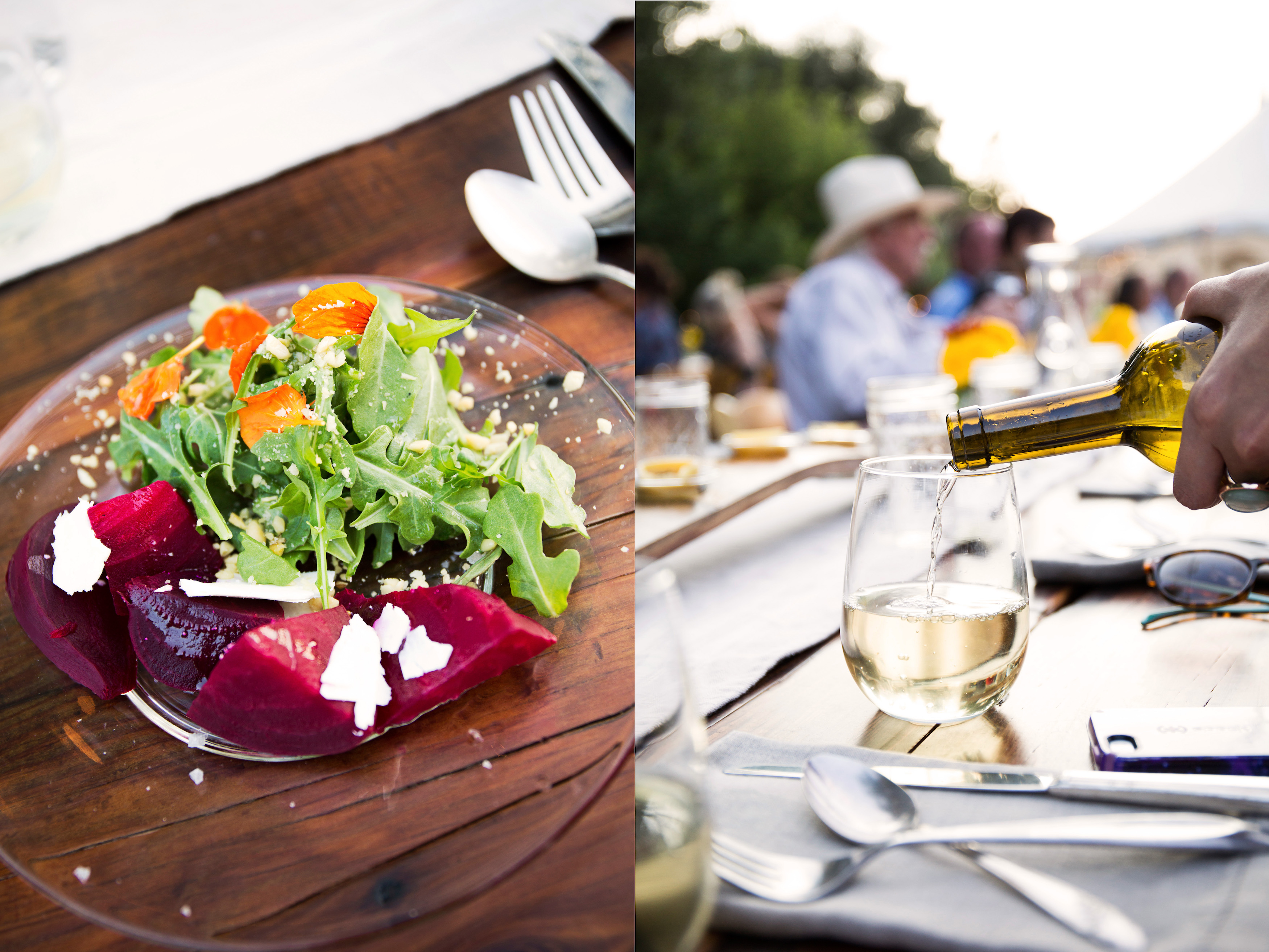 That night’s seven-course dinner was just one of 12 to 14 locally produced and sourced events that the couple puts on every summer, in addition to numerous cooking and food education classes they host as well.

“It’s mostly on Wednesdays — July through September; those are the months that the harvest comes on and it’s a nice time to sit outside,” Burton said.

And it’s not hard to see why — that dinner was set during a crisp mid-summer night, and the crowd — spread out across the large green lawn, amidst various retired tractors and elegant wicker lawn chairs — had already been buzzing with conversation, spirits and the anticipation of the evening’s indulgent meal.

The course of the evening was filled with the clinking of glasses, the progressively playful and drunken laughter of attending patrons and the dance of waiters weaving between the two seemingly infinite wooden dining tables. Plates of jalapeño mousse pate dressed with lilacs and tart blueberries, citrus beet salads, cold summer soups with refreshing basil, roasted root vegetables with whipped ricotta, jus bathed quail and bowls of coffee ice cream garnished with rosemary and the faint hint of juniper made an appearance in front of the guests — all locally sourced and harvested — whose beauty and wholesomeness was drunk in by the eyes of diners before consumed and satiated by each and every stomach.

With such a heavenly spread, it was almost easy to forget that the meal was forged in a large smoker outside and the small kitchen of the farm — rather than in the belly of a five star restaurant; particularly when one took a step back to soak in the dining area — nestled beneath the mothering branches of the cottonwood tree, dotted with the twinkling and blinking of string lights as the late sun faded into the warm blanketed darkness of a summer night.

But the farm does not stand alone in leading its culinary gatherings and has partnered with various local restaurants and vendors to produce these beautiful dinners — their respective chefs, using the land, the latest produce and personal musings as inspiration for the multi-course reflections.

That night’s dinner was created from the mind of New York chef, Modou and his support staff from Sauvage, a local Colorado catering company. Some of the more notable Colorado culinary partners have also included Blackbelly, A Spice of Life, Cured and The Kitchen.

“One of the main things we love about our business is that we provide a lot of business and jobs for other people — we employee 14 to 15 people [at the farm]. It’s good jobs and we really try to encourage entrepreneurship in young people [so they can] learn how to run their own business. Caterers, musicians, bar tenders — so many things — the list goes on and on. We have 180 business on the list. All Boulder County local companies.”

In addition to supporting local businesses, the Farmette also extends its community outreach through partnerships with a local charity for each dinner — further contributing to the dynamic philanthropy that seems innate to the Burtons and the rest of the farm family. It’s just one of the great thing about these dinners — guests not only support the local farmers and economy with the food, but nearby charities as well — a certain percentage of proceeds are donated to each dinner. The dinners range in price from $30 to $70 per person, depending on the menu and how the chef prices the menu. The most recent dinner, last Wednesday the August 2, raised more than $1,200 for LCF or the Lyons Community Foundation. Proceeds from the following weeks’ dinner will support the Colorado Haiti Project.

When asked how the Farmette has selected who to share its special space and dinners with, Burton noted that it was the awareness of respective partners that was incredibly important. “…they [have to] do a lot of farm to table and have really been in the movement a long time. Sometimes, in the past, they asked me, or I’ll ask them…it’s gotten to be where it’s the same ones that have worked out — [have] for a while. And it’s all works out. It’s just all good.”

Besides the beautiful food, ambiance and community they bring together, the Farmette dinners highlight the importance of the awareness and relationship we have with our food — furthermore, how disassociated we’ve become as a society with ours. They spark an important conversation that we need to be having about our fare. They bring up topics of health-being aware and selective of what we put into our bodies (non-toxic, non-GMO produce and meats), economy-supporting our local vendors, neighbors and growers instead of large corporations, and the importance of community — something that Betsy and Mike inspire to do with these dinners and through further education, cooking and other various food classes.

Besides attending and feasting at one of these beautiful Farm to Table dinners, how can people do their part to eat locally and responsibly?

“Support[ing] farmers at the farmers market is huge,” Betsy advised, “They work so hard. To support that and eat healthy [is responsible].” Investing into the regional economy — rather than in the large corporations that monopolize the food industry and use pesticides, GMO (genetically modified) foods and feed corporate America — is the best route. Particularly backing CSA’s — or Community Supported Agriculture — Burton advised. These are organizations in which the members, depending on what farm, will pay in advance in the winter and springtime for the whole growing season; “So it helps the farmers to pay for labor and do a lot of things — kind of a creative financing in a way — giving the money up front […] to support [farms or farmers markets].”

Aside from great food, supporting local farms, charities and the Colorado economy, what makes for a perfect dinner according to Betsy Burton? Community.

“The other night. That to me was a perfect dinner […] The weather — the group of people was excited — everyone was excited to be there. […] I look at it like this,” Burton said, “If you go out to a nice restaurant in Boulder, you spend a bunch of money and hardly talk to your neighbors. When that whole energy and community is here [at the farm] and talking to each other [..] that to me was just wonderful. And the creativity and beauty of the food — even the lights. It was just really a sparkly and special night. And most of them are.”

If you’d like to attend one of the remaining summer Farm to Table dinners at the Farmette or attend a food education course, visit them in Lyons at 4121 Ute Highway or online at The Lyons Farmette.

All photography courtesy of Nisa Sedaghat.