We Tried It – Dinner Séance with Paranormal Investigators

“Let’s see, how do I always put this? Bad choices, drinking — that’s what’ll get you here,” Bryan Bonner joked.

His work partner, Matthew M. Baxter, sat next to him, adorned in the same black suit and lime-green tie ensemble. It was half past seven in the evening, and a dining room of guests sat downstairs waiting for the Dinner Séance to begin. 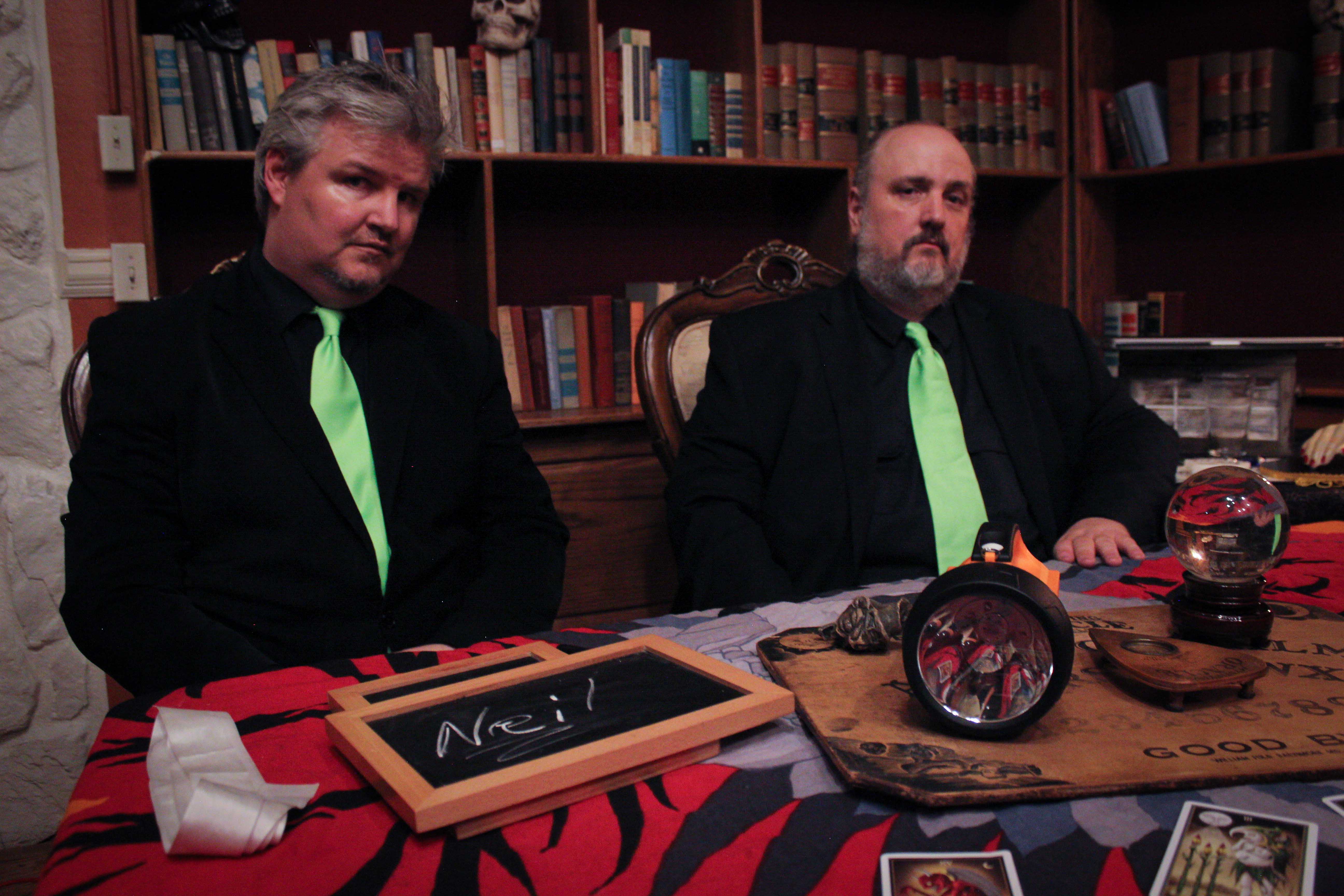 All photography by Canada Albin

But, this was not the first time the pair has delved into ghostly or abnormal existences — not even just this week. The mysterious duo — more commonly known as “Bryan and Baxter” — has been in the field of paranormal research for more than 26 years, and have hosted these spectral dinners since 2008.

The “Haunted Denver Dinners” idea was launched after the owner of the Indian restaurant chain, Yak and Yeti, was experiencing a series of unexplainable activities on the top floor of his East Hampden, Denver location — after Bryan and Baxter had already been called to “address” a similar occurrence at another one of his locations. The owner’s staff had been disturbed by sounds of footsteps in the upstairs bathroom when no one was there, and objects knocked over or broken in the dark whenever a staff member was by him or herself. Coincidence? Pranks? Something more? B and B decided to investigate.

The partners started researching the building decades back, determined to find a cause for the seeming unrest of the possible “disturber(s),” but they were unable to find anything — initially — that could explain the situation. After digging deeper, despite police and city record offices’ continual deference from the subject, B and B finally unearthed the event that would give cause to the Yak and Yeti’s “haunting” and the rise of the duo’s Dinner Séances to explore it.

Let’s start from the beginning, though.

So, how exactly does one get into the field of paranormal research?

“I always blame my dead mother — I have to start that way,” Bryan initiated. “So growing up young — really young — she was like this huge horror movie buff, but nobody watched them with her. So, she brought me in to watch the movies with her — I’m five years old, I’m terrified of these things […] and it made me an absolutely, over the top, weird, horror movie fan. And now I live in a museum of horror stuff.” 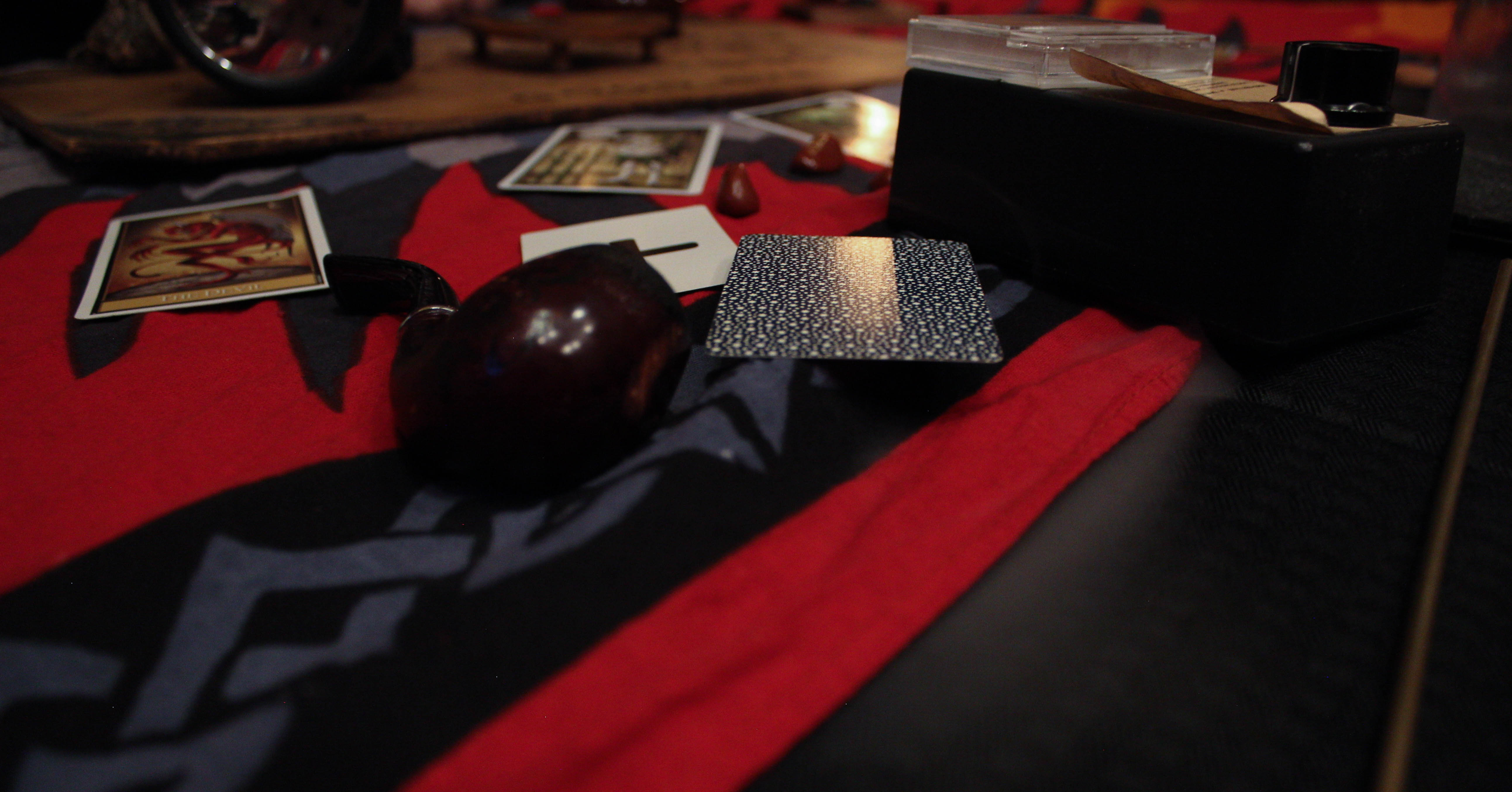 Baxter’s entrance into this world was one that most young kids have explored or experienced at one point or another, “When I was young, I saw the Exorcist and it scared the hell out of me. Now, I was 10 years old when I saw it. In the movie, the girl was 12 years old when she was possessed, so I thought, ‘Shit, I’ve only got 2 years.’ […] So, what it made me think was, ‘I need to know my enemy, I need to know about these unknown things and how I defend myself against them. So, I started researching it and found lots of experts — problem is, all the experts disagree with each other. So, it got me thinking, ‘I need to go find my own answers,’ so I’ve been doing that ever since.”

Both set out in their early twenties to pursue their own research in the field of paranormal activity and occurrences, which would later entwine their paths. After joining a local paranormal group in Denver (that shall remain nameless), Baxter quickly debunked and combated all their findings, leading him to eventually get kicked out of the group. He recalled another man the group had had a similar experience with, so decided to (in his words) “go find the asshole.” Turns out, that “asshole,” was Bryan. And the rest, as they say, was history.

Besides the quirky darkness of the two and their matching uniforms, the most notable difference between the pair and the rest of their industry would likely be their mentality behind the investigations.

“You have to remain — and we use the word properly — skeptical. And skeptical does not mean non-believer — that’s cynical. It’s just open to all explanations until you can find the right one,” Bonner advised.

As for their “Ghostbusters equipment?” Both caution that most of what you see utilized on television is not being used properly.

“Even though we use a lot of equipment that’s very similar to what other people use in the field, we get trained to use it for whatever it was designed for in the first place. So, if we go out and use a thermal camera, for example, we don’t go to a ‘Ghost Hunting Class for Thermal Cameras,’ we’ve gone to now five different manufacturers and gotten certified to use them. So, we understand their limitations, the science behind it. It makes it a lot different.” Their most important tool of all? “Our big brains” the pair joked. “Critical thinking is huge,” Baxter elaborated.

Okay, so say they have the tools and knowledge to back up their craft, but what about any personal paranormal encounters or experiences themselves?

“One night, we were at an investigation up in Fort Collins, and Bryan was slapped. Now, that’s not all that odd,” Baxter explained, “But in this case, there was nobody there to slap him.” The investigators had been doing a middle of the night observation of a potential haunting, for a family that had sequestered themselves to a single room — the most haunted apparently. The family had insisted on Bryan joining them in the room while they took turns sleeping, that was when the slap occurred. “The only thing on the video was me looking around like a complete idiot, but there’s nothing there.”

As for Baxter’s honorable, ghostly mention? Just the casual encounter with a woman crossing his path in the basement hallway of a haunted church in Colorado Springs. Again, nothing left on camera except the stunned look on Baxter’s face. Feeling the chills yet? Then it’s time to get on to the night’s Dinner Séance. 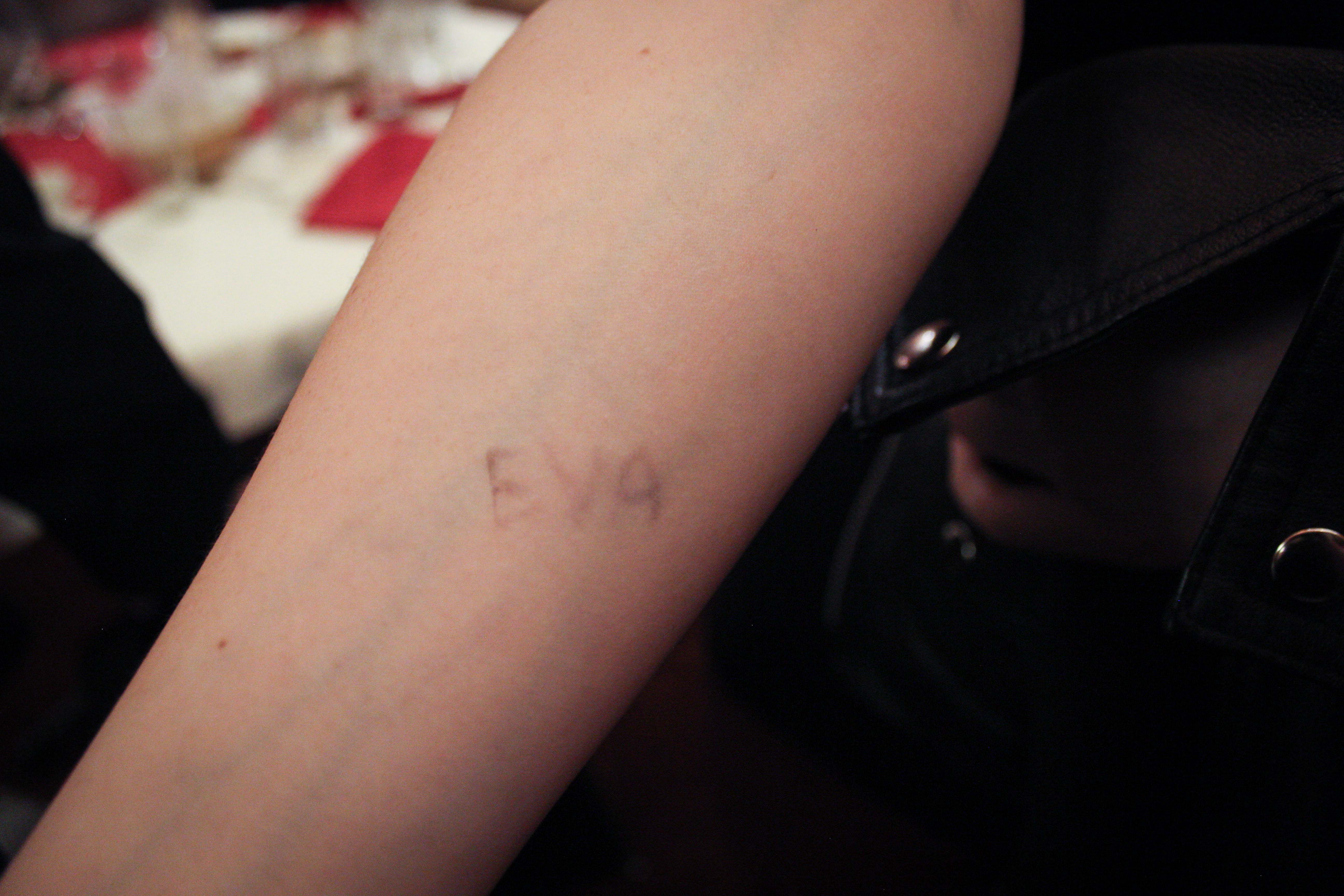 At half past eight, the sun had finally set, and it was time to begin the séance. On the top floor of the haunted Yak and Yeti restaurant, after an indulgent meal of Indian food and for some a few rounds of spirits (to calm the nerves), the group settled in for a round of calling the spirits.

We sat in complete darkness, the only source of light was the flickering of a pair of candles in the corner that lit the table spread, covered in various paranormal paraphernalia — tarot cards, an old pipe, EMF (electro-magnetic frequency) detectors, what looked like an old, mini diner radio (a.k.a. “Ghost Box”), a Ouiji board, an old wooden box, a disembodied wooden hand attached to a wood platform — to name a few. After the group had settled in, we were instructed that the room had been set to have a certain radio frequency running through it, one that would make it easier to tap into communicating with the paranormal. And so, had begun our journey, flirting with the veil of “the other side.” Bryan and Baxter started with the story and history behind what they had found to have transpired, in the very spot that we were currently sitting, as we began our séance — murder. Buckle in dear readers, because things were about to get wild. 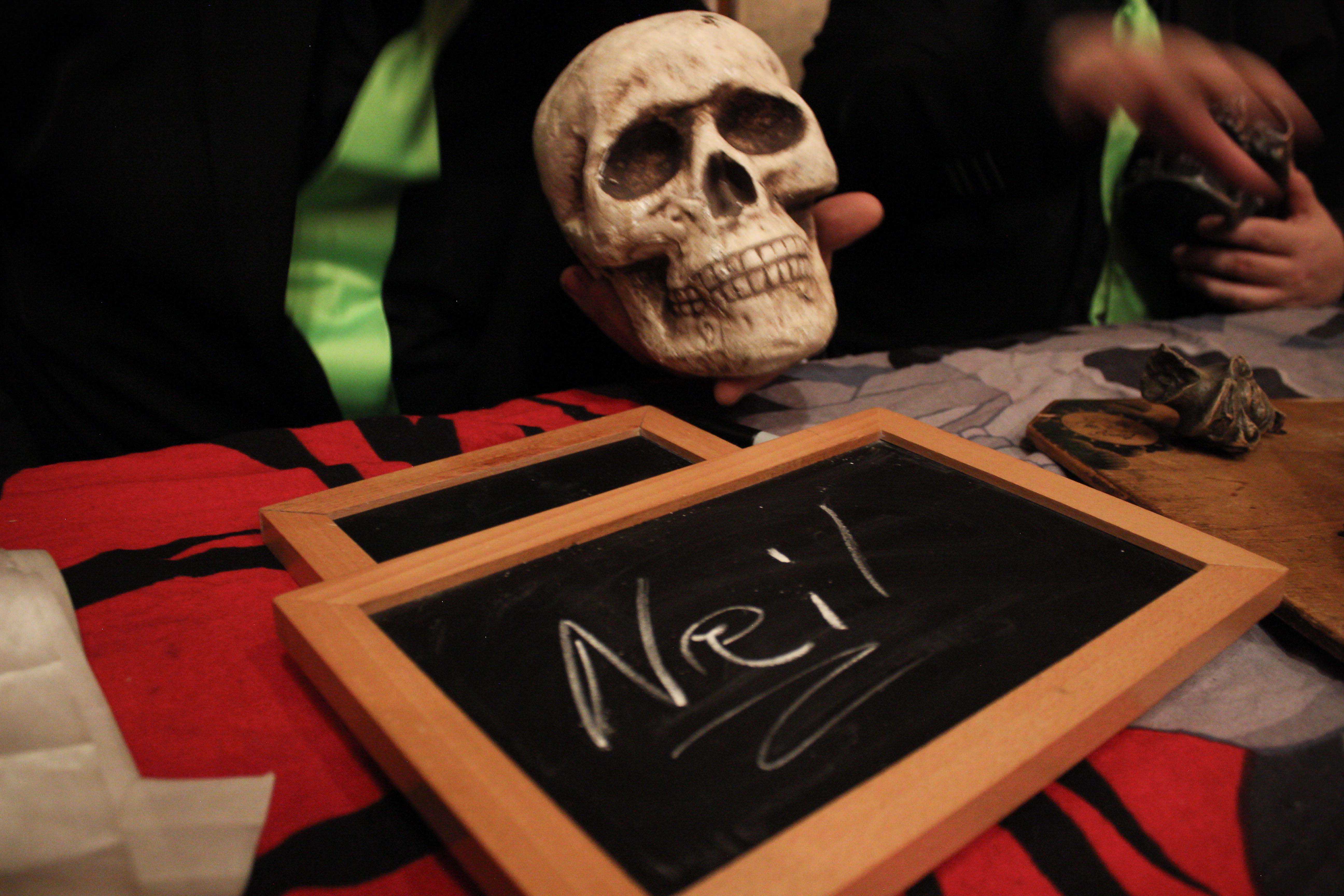 During the dinner séance, throughout the course of the next hour and a half, we witnessed glasses shattered in the dark corner of our room, books — dispersed through the large library behind us — thrown from and knocked off the shelves. Smoke emerged from the pipe (that belonged to our dear spirit) that sat in middle of the table. Names of close friends were mysteriously written on participants’ arms — without their knowledge of how they got there — and the name of the dad of our 303 Magazine photographer, was whispered — among the sea of other disembodied voices — from the radio box sitting on the corner of our table.

If that was not enough to combat any discernment or doubt, halfway through the session, Baxter had begun to question the spirit who had apparently joined us, and recorded his answers on two separate iPhones of random participants. During one of Baxter’s seemingly rhetoric questions to the spirit, Neil (we later found to be his name) — “Why are you still here?” — the group had initially heard nothing in response; however, when the recording was later played back, a concordant chill ran down everyone’s spine, when we all heard the slithering response of, “I still feel pain.”

Theatre? Special effects? Or could there really be something more, walking among us every day, with or without our knowledge? We’ll leave that up to you to be the judge. One thing is certain, there were a lot of skeptics that entered the séance dinner that night that left as believers. 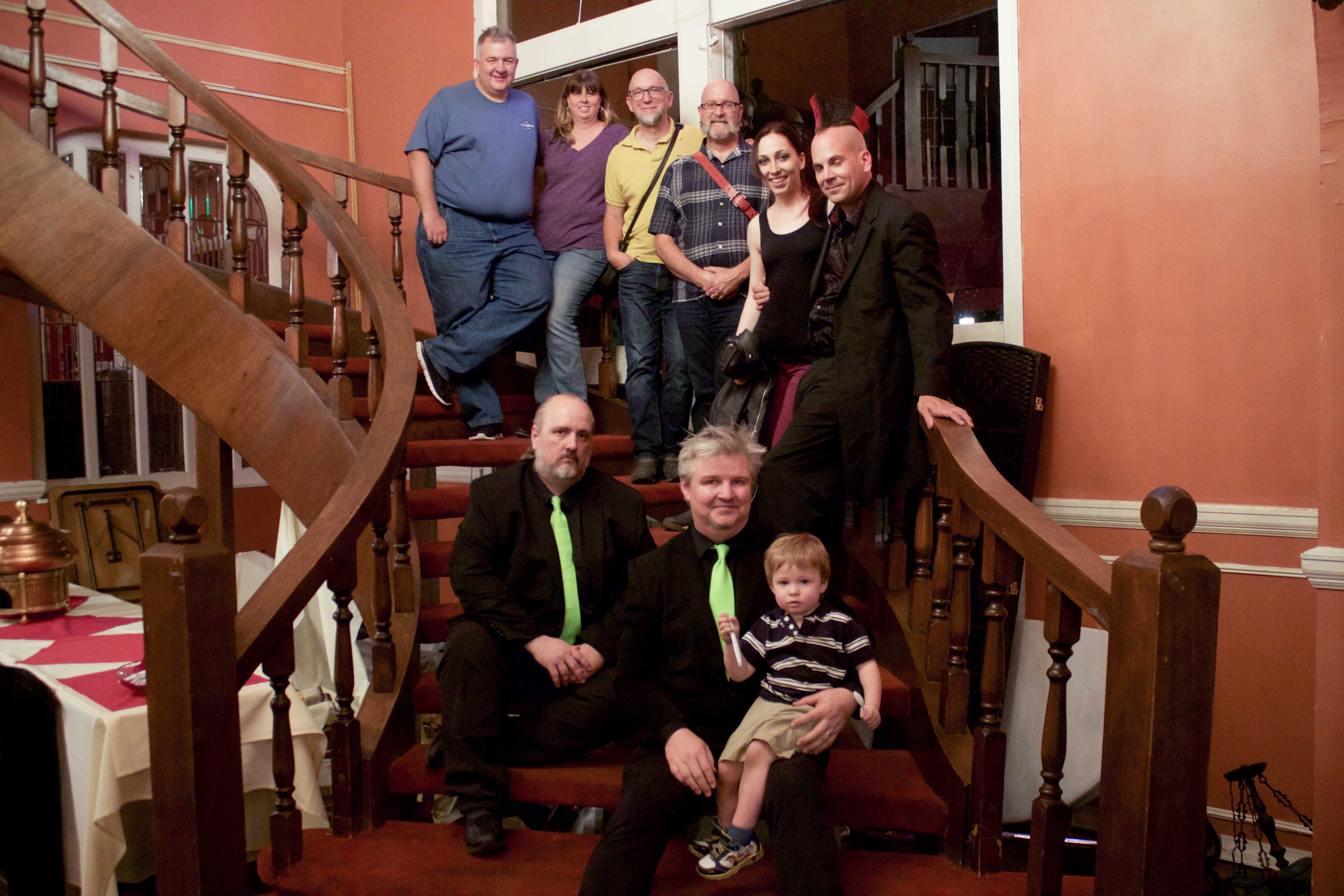 All photos by Canada Albin