This past Saturday night at Red Rocks there was an awesome explosion of creativity and love. It was a very different experience and you could feel the creative energy throughout the amphitheater. Over 15 visionary painters gathered into one of the most beautiful venues in the world and painted alongside the energy of a live show. Joined by a host of talented musical artists who provided the soundtrack to the event — Papadosio headlined the music side of the night  — 303 Magazine was lucky enough to speak with the band prior to the show.

Speaking of their excitement for returning to Red Rocks and the details of what make this show special, Sam Brouse from Papadosio said, “I feel like Red Rocks is one of the few places where you can actually feel energy. It actually feels like it’s alive. It’s a unique venue to play in. It’s super iconic so there’s that, but also just like physically — it’s a natural amphitheater and you can see everybody in the crowd, even though there’s a ton of people. So it’s almost like the most intimate of shows because it’s so wide open and everybody’s kind of on the same page that this is special.” 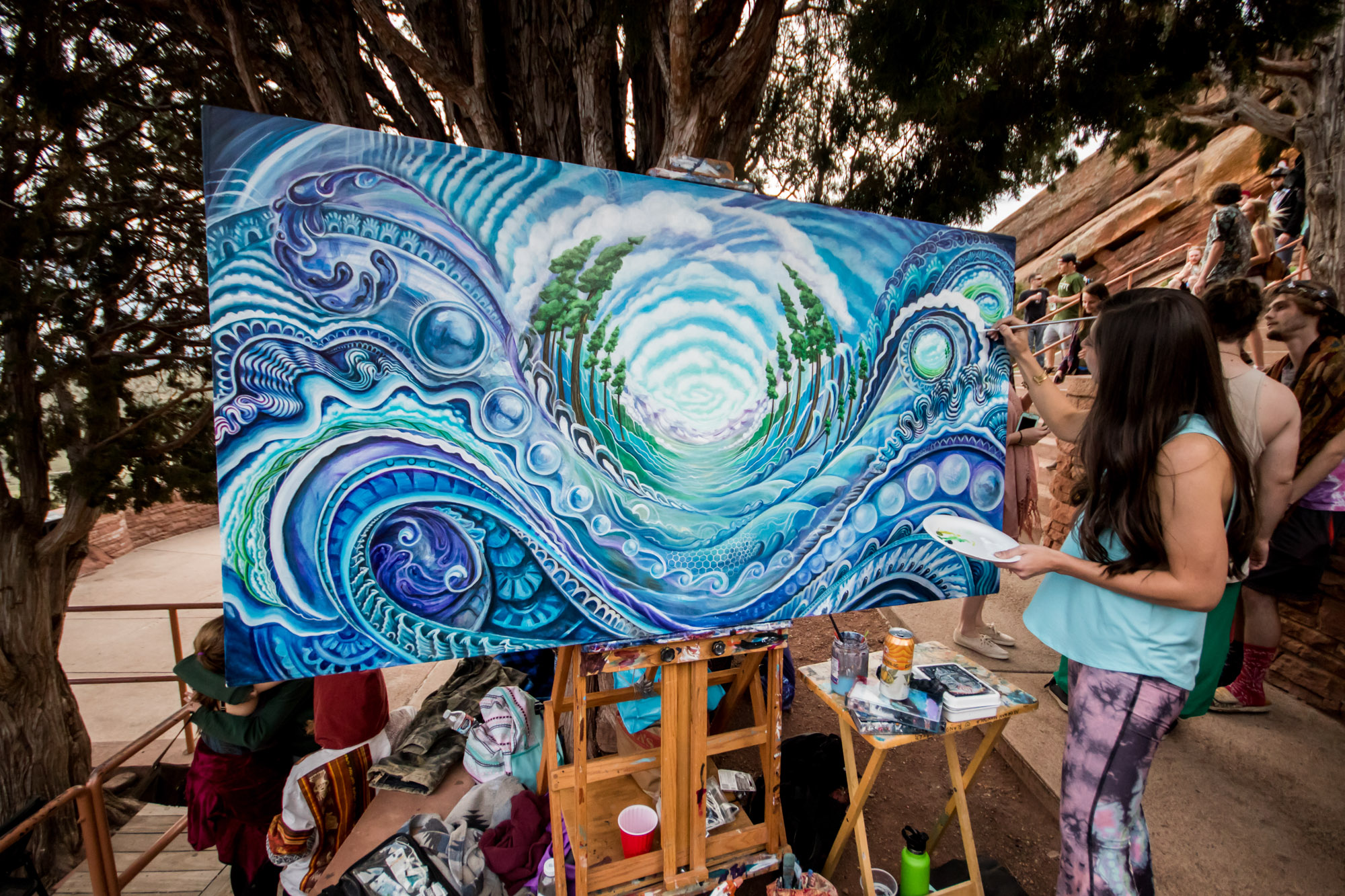 The crowd was filled with an eccentric group of people — dancing bodies from every race, age and gender were present and psychedelic clothes and costumes could be seen throughout. The visual artists were actually placed all along the sides of the amphitheater, making it so anywhere you walked, you could easily stumble upon some remarkable artwork. The list of talented visual artists that were invited along for this experience can be found here.

The music started around 6 p.m. with opening sets by Supersillyus and Desert Dwellers. As daytime faded and the crowd began to fill up the amphitheater, the music stayed consistent in keeping the energy flowing. The featured visual painters for the night were Alex and Allyson Grey, who are legends in the psychedelic community and two of the most prominent visionary artists in today’s modern culture. The canvas in which Alex worked on featured a pot leaf, designed in the beautifully intricate Alex Grey style that his fans have come to love. The pot-themed painting seemed appropriate for the Colorado event and there was definitely no shortage of attendees paying tribute to the sacrament. 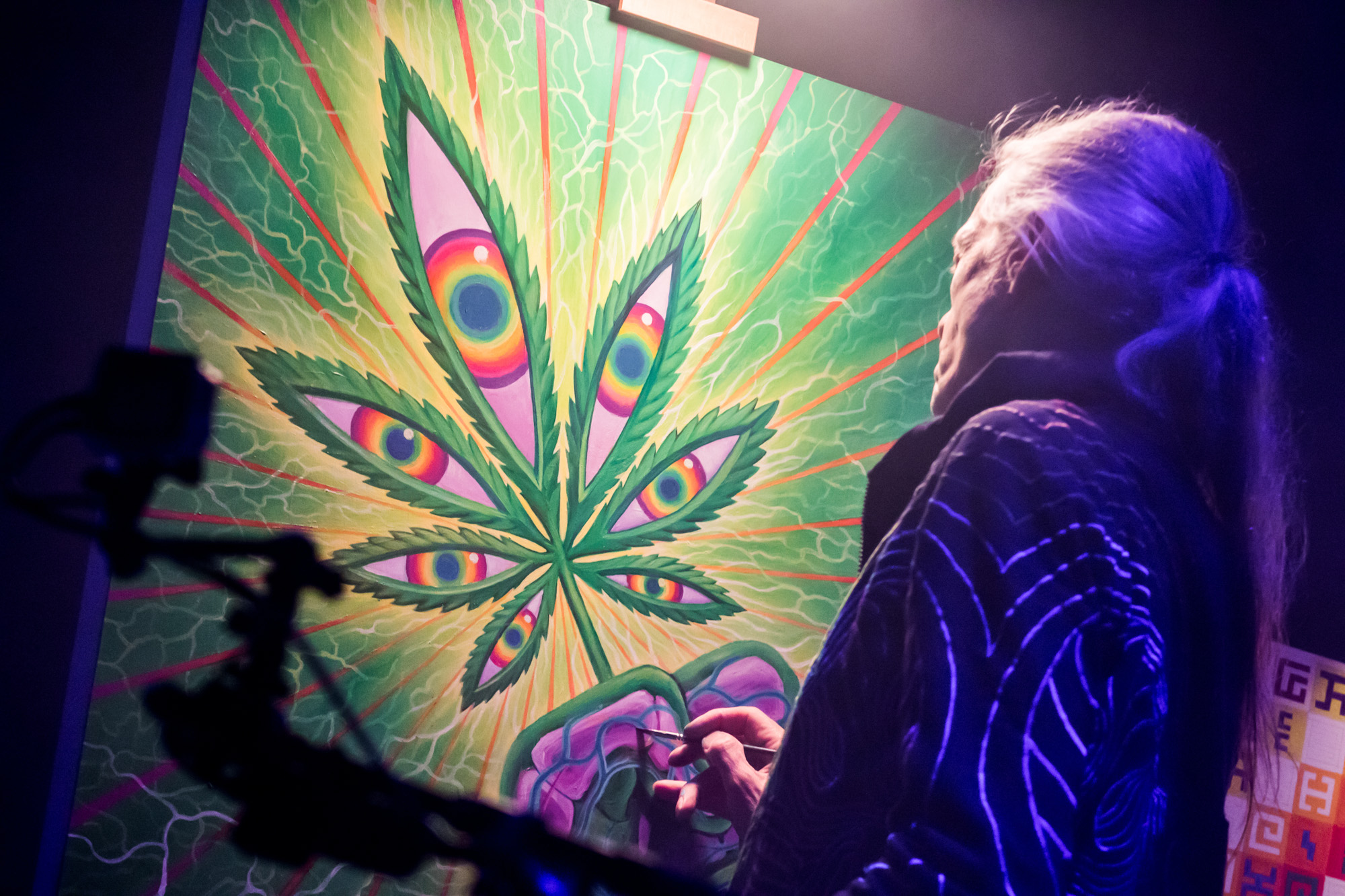 As the sunset concluded, Colorado’s own Sunsquabi hit the stage in front of the packed home state crowd. Throughout the performance, the trio was electrifying and entertaining, jumping up and down on stage and showcasing some very impressive instrumentation. This set had to be one of the funkiest things I have ever heard and the groovy basslines and tempos made for an infectious overflowing of dancing. An-Ten-Nae graced the stage next for a heavy trance-inspired set between Sunsquabi and the headliners Papadosio.

One of the remarkable aspects of a concert like this is the group-like mind that the entire crowd seemingly embodies. Something about the music speaks to the human need to dance and express oneself. Another great aspect of a show like this is the non-judgmental factor of the crowd. Everyone in attendance was there for the pure love of music and dancing. Before Papadosio finally hit the stage, Alex and Allyson took some time to speak to the crowd, inviting everyone to come join them in building a temple at the Chapel of Sacred Mirrors (COSM) in New York. After a short introduction into what Entheon is — the temple they are building at COSM — the Greys welcomed the headliners on to the stage for a receptive greeting. 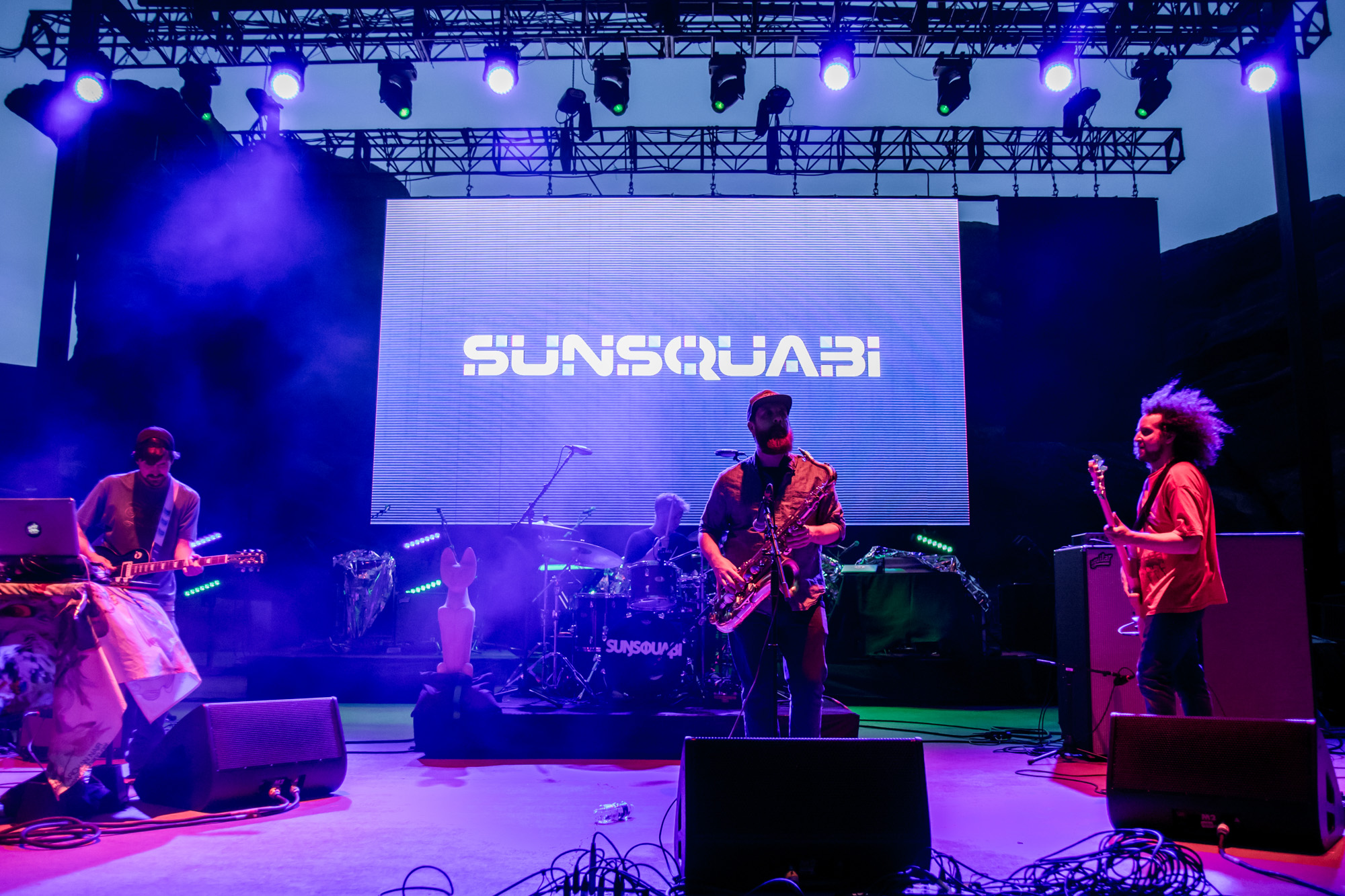 As Papdosio dove into their beautiful melodies and unique transitions, the crowd at the Rocks really began to sway and the energy could be felt throughout. Accompanying Papadosio’s jamming was the beautifully intricate visual projections by Johnathan Singer. The astonishing projections are almost indescribable by words but in my best and simplest attempt, they are infinitely beautiful and overwhelmingly psychedelic. This breathtaking combination of Singer’s projections and Papadosio’s instrumentation continued on for over two and a half hours. Speaking on the connection between art and music, Brouse said, “It’s really interesting when you think about how some people can hear something and play it, and other people can imagine something and draw it. So it has to do with two different senses, the eyes and the ears, but really it’s just taking something that doesn’t exist physically, and bringing it into the world with this act of creating.” 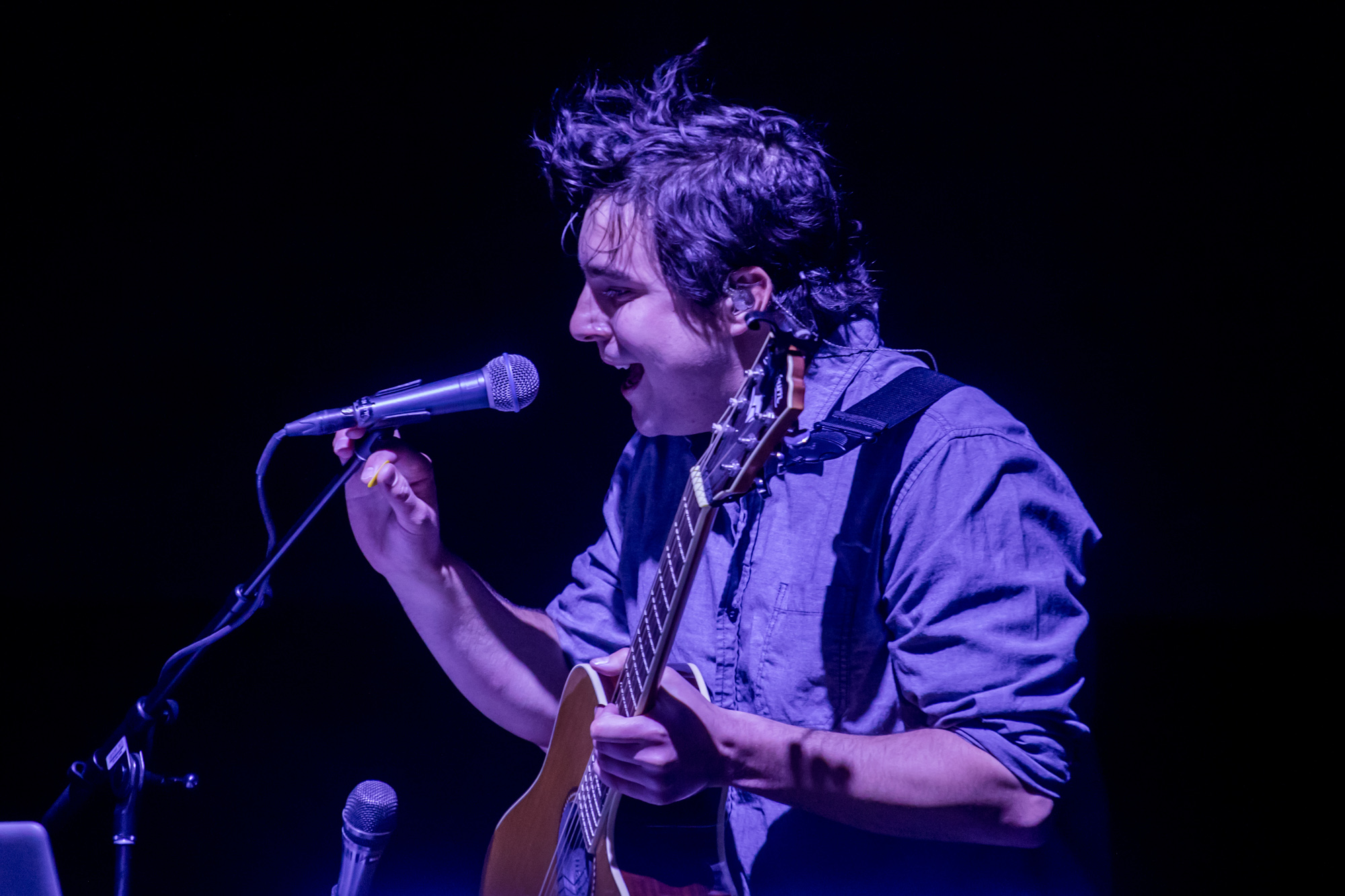 The night as a whole was a beautiful encapsulation of all things creative and was an awesome experience to be a part of. It was a really cool idea to have the artists painting all throughout the venue and the extra bonus of having the iconic Alex and Allyson Grey only added to the amazing memories made by the people in attendance. It was great to see a crowd that was truly interested in the music itself and not a sea of cell phone use and intoxication like you often see at other genre shows. This is the third year in a row that the Greys have been brought to the Rocks by an exceptional music line-up, and it definitely seems like there’s a good possibility of them returning again for a fourth. If they do, you definitely don’t want to miss the next one of these exciting performances.

All Photography by Mike Kvackay. 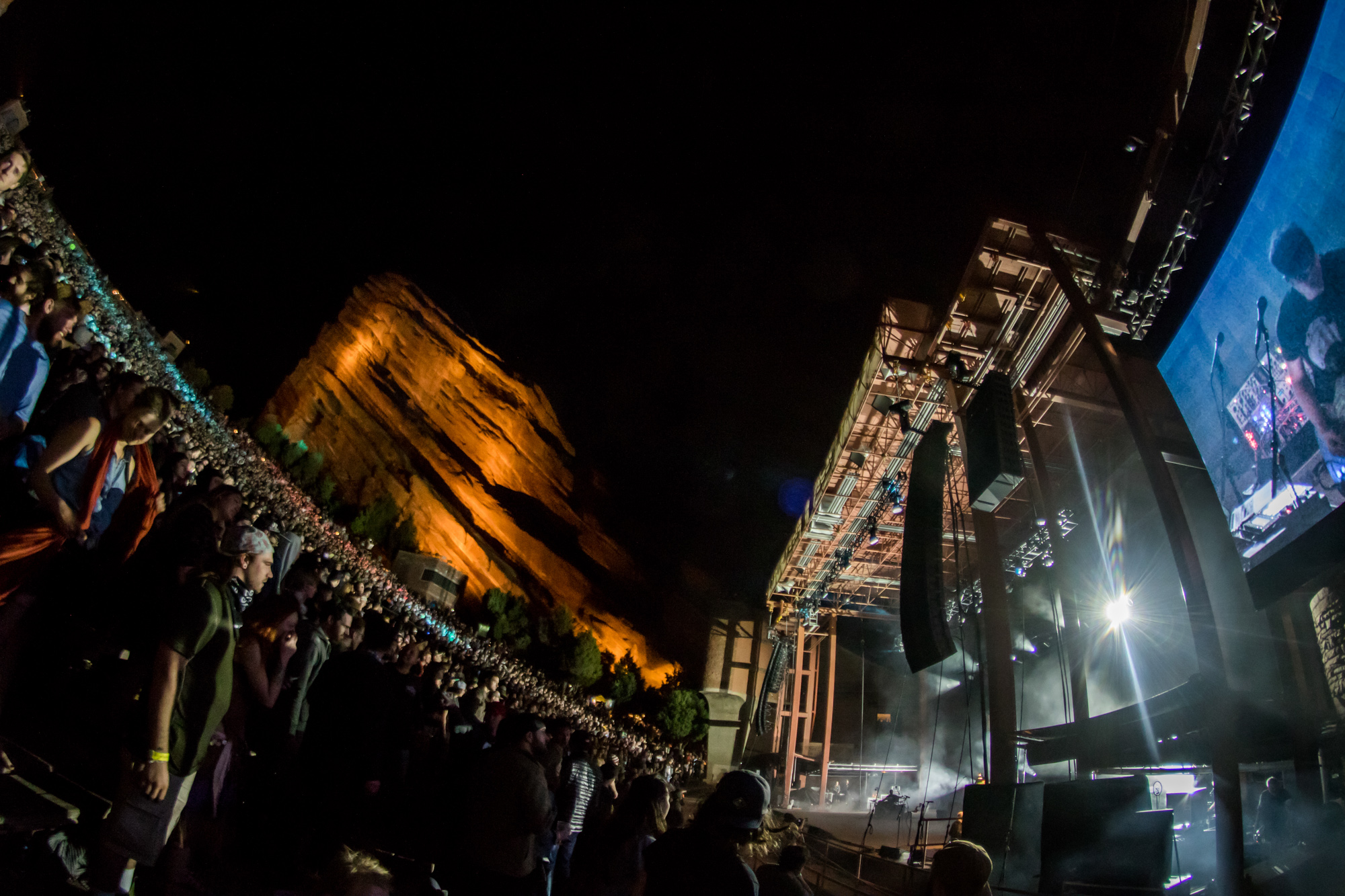