Life goes fast, and our youth fades faster. It’s with our own ignorance and denial we find ourselves letting it slip through our grasp, choosing to focus on a future narrative of ourselves that is yet to exist. However, in this life, there are moments — some brief, yet moments nonetheless, where our world comes into hyper focus and we are left to revel in its momentary bliss. Odesza’s May 27 Red Rocks performance was one such moment…or rather a culmination of them meeting in the middle, soundtracked by Odesza’s music. For a group whose music attunes to any situation — whether it be the road trip, the heartbreak or the mundane day to day, their performance shined in the forefront begging us to bask in those moments, reminiscing in the brilliance together.

Ascending Red Rocks with droves of people who’d come from all across the country, we were met with the tail end of the storm that had bombarded Denver for much of the day. Though damp, the energy of the crowd piling in was palpable — many of whom were not only experiencing Odesza for the first time but Red Rocks as well. The rain was brief, only lasting until the first opener Photay took the stage. He dried us out with the warm vibes of his future bass sound. Fakear followed shortly after in a flurry of vocal blips and bouncing synths. Chatter gave way to nodding heads and swaying bodies as Fakear music coaxed us into a state of serenity. 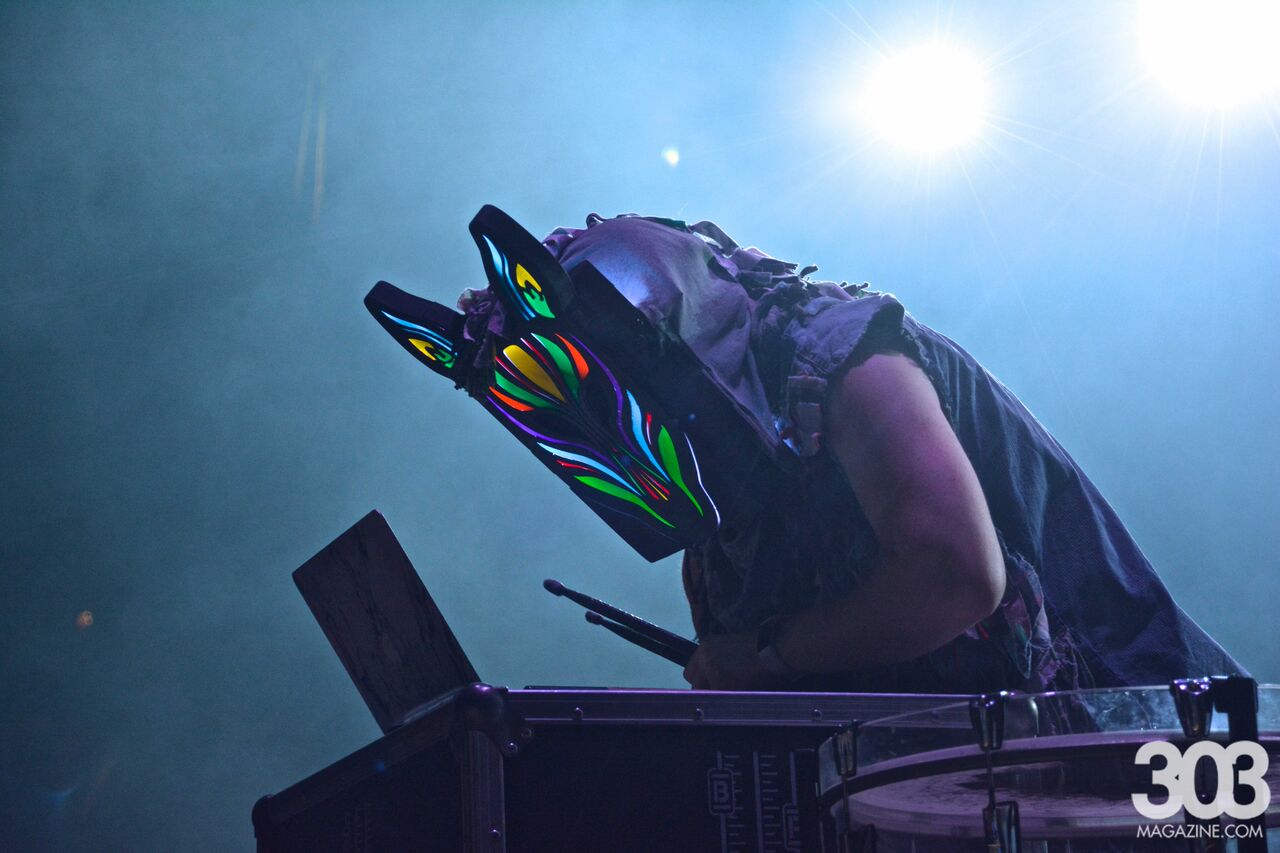 By the time the night’s last opener, Slow Magic, took the stage, the sun was dipping behind the horizon and we were catching a contact high from the vibes and the smoke floating off the rocks. Armed with a laptop, translucent drums and his trademark color-shifting mask, Slow Magic settled into a beautifully raucous set moving from the stage to the seats and punctuating every electronic sequence with fervor. Between hits from his 2014 album How To Run Away and his masterful remix of Odesza’s “Say My Name,” the audience was at a fever pitch of vivaciousness. However, when Slow Magic dropped his unexpected remix to blink-182’s “All The Small Things,” the audience was pushed over the edge. The song hit home for every ’90s kid in attendance, as we sang at the top of our lungs trying to sing louder than we had any time in our lives prior. It was the first of many. 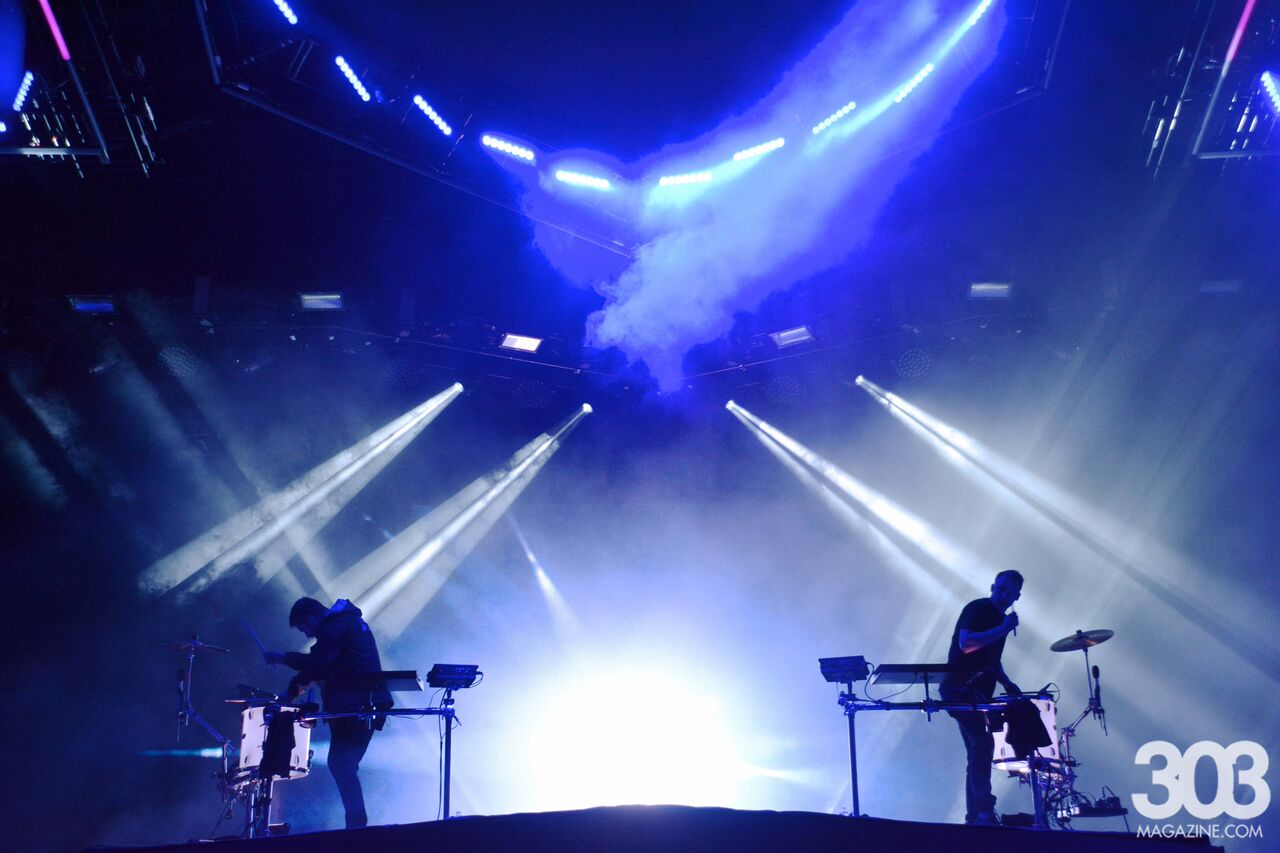 It was hard to think that the night could get any better than it already was until Odesza took the stage and blew our collective minds. Rising on podiums that looked out over the iconic rocks, flanked by two trumpet players and a guitarist, Odesza hit the stage with a vengeance. The massive LED screen behind them illuminated with visions of volcanic eruptions to rapidly cutting animations, made for cinematic effect. Odesza’s first half of the performance played out like a montage of their greatest hits, songs from their acclaimed In Return with remixes like “Saola” and “Big Girls Cry” dispersed between. The intrinsic nature these songs held in the memories of each person in attendance shined bright as they’d look to their side and found a mutual understanding with whoever happened to be beside them singing along. Complete with a coordinated drum line, perforating every song with gusto, everything Odesza played hit that much harder.

Halfway through their performance, new music began spilling out starting with “Late Night.” Swimming in the lights flooding the amphitheater, “Late Night” managed to drown us in its jubilance. “Line of Sight” followed with an appearance from WYNNE, whose voice soared into the sky ensnaring every ear on its way up. Contra to In Return’s youthful naivety, Odesza’s new music played last night, still rooted in its emotional crux, seems to have grown a little darker and more mature taking on a new majesty of its own. It was still the same Odesza, but a version with a touch of grit and urgency, which made the debut of their new material all the more thrilling. 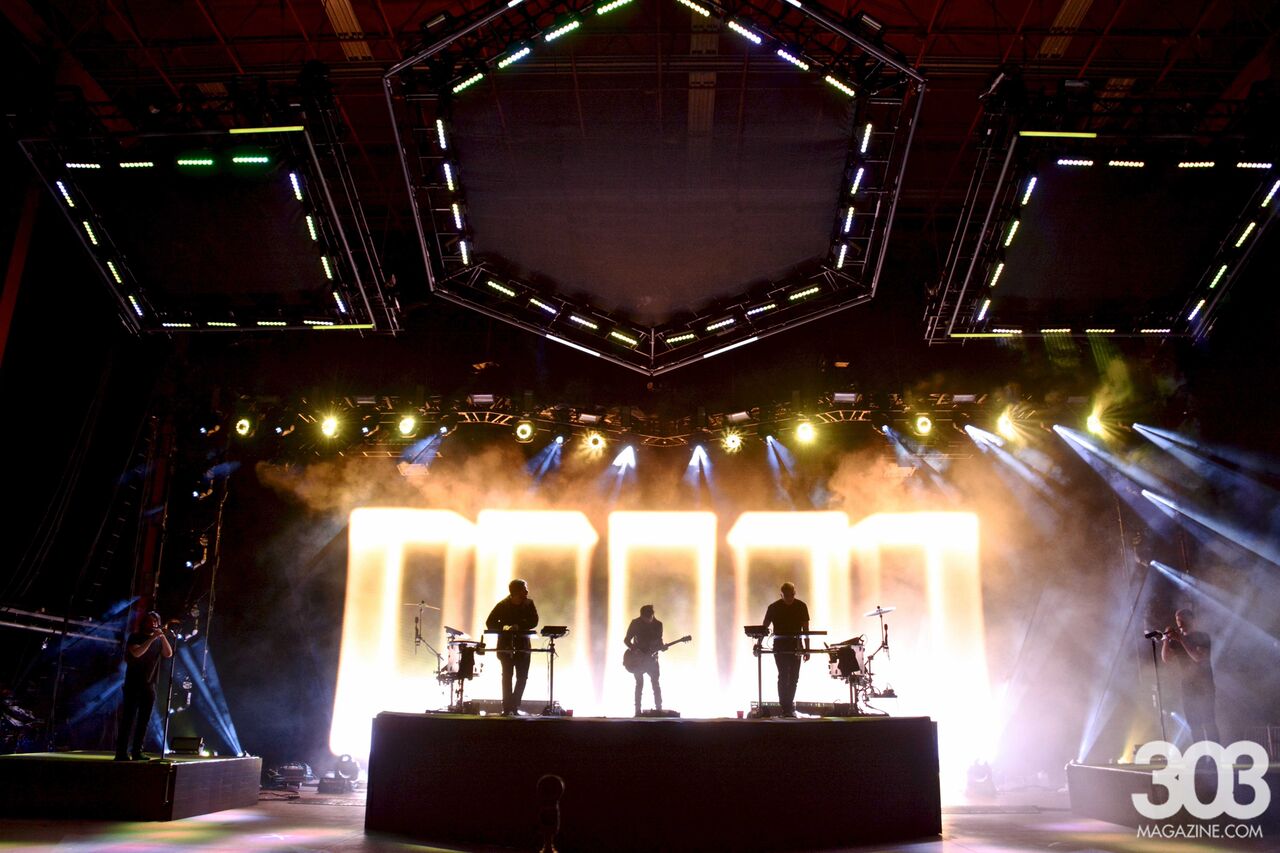 The clarity of Odesza’s music in the many facets of life it flows into made their Red Rocks performance transcendental in a sense. The many different lives that congregated at Red Rocks last night had gone full circle from having those tiny moments defined by Odesza’s music to being in the epicenter of thousands of people having a larger than life moment together. Perhaps if every moment of life were savored for the mere fact of being alive, there’d be no need for Odesza. But life isn’t that simple. Odesza didn’t just put on a performance, they reminded us how good it feels to live in the moment.