The fourth annual Native Fashion in the City took place on Friday, March 24 and stole our hearts with a rich display of Native American culture and heritage through fashion. What promised to be stylish night resulted in an event that surpassed fashion and educated us about how designers take influence from their tribes to bring garments to life. We also learned how oppression and the current political climate serve as inspiration, and that this showcase has something for everybody. Native Fashion in the City is unique in the sense that everyone involved is Native American and included are models of different ages and body types. Take a look at the designers that offered us a window into their world.

Della BigHair-Stump (Crow) showcased a mesmerizing array of dresses as models walked the runway in bold colors, vivid textures, and beautiful accessories. In particular, the purses and jewelry presented make a case for a lively addition to any outfit. Designs by Della are ready-to-wear Native Style clothing with a hint of Crow Style designs. Stump’s mission is to share her Crow culture with the world through fashion design. 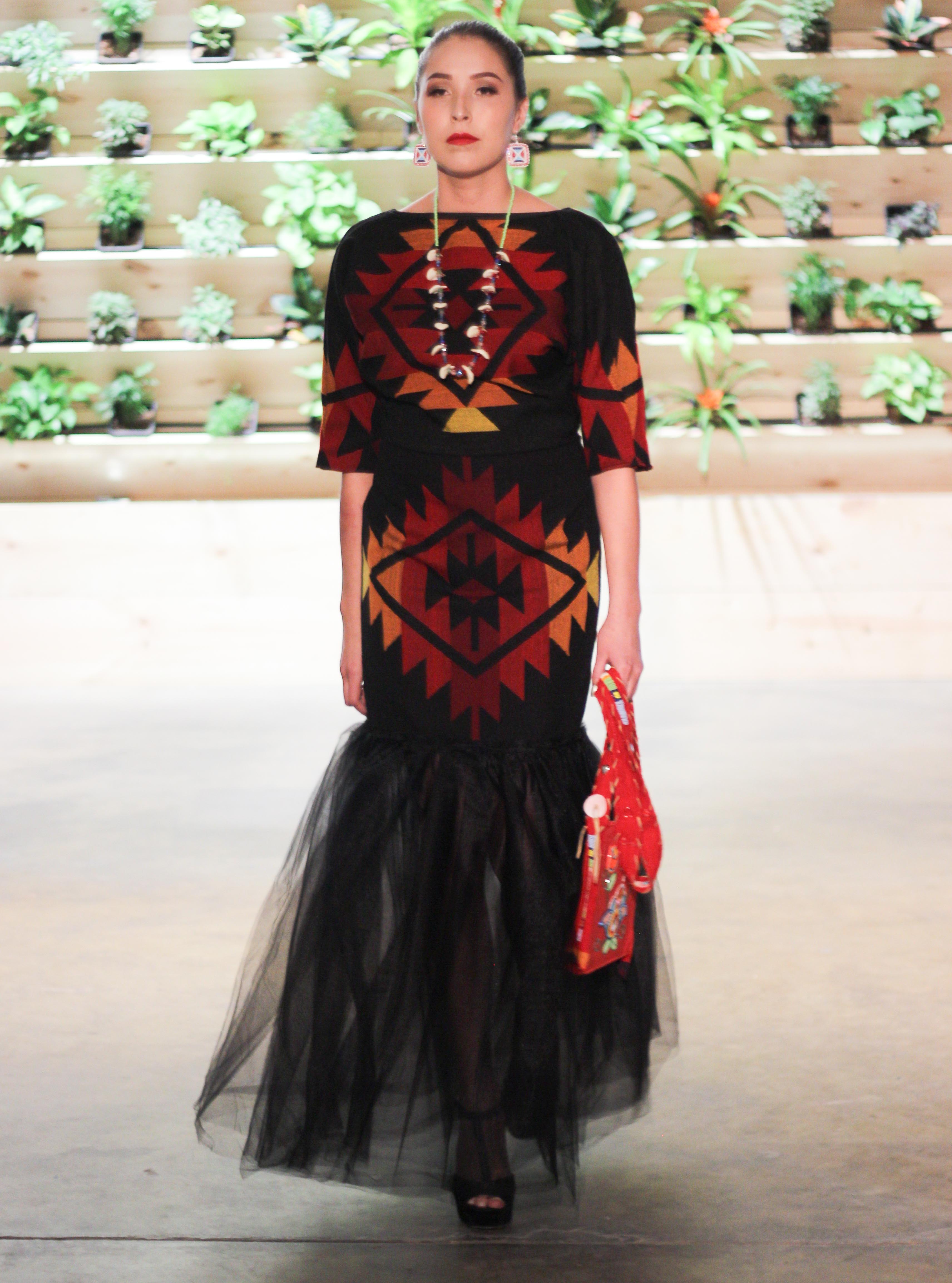 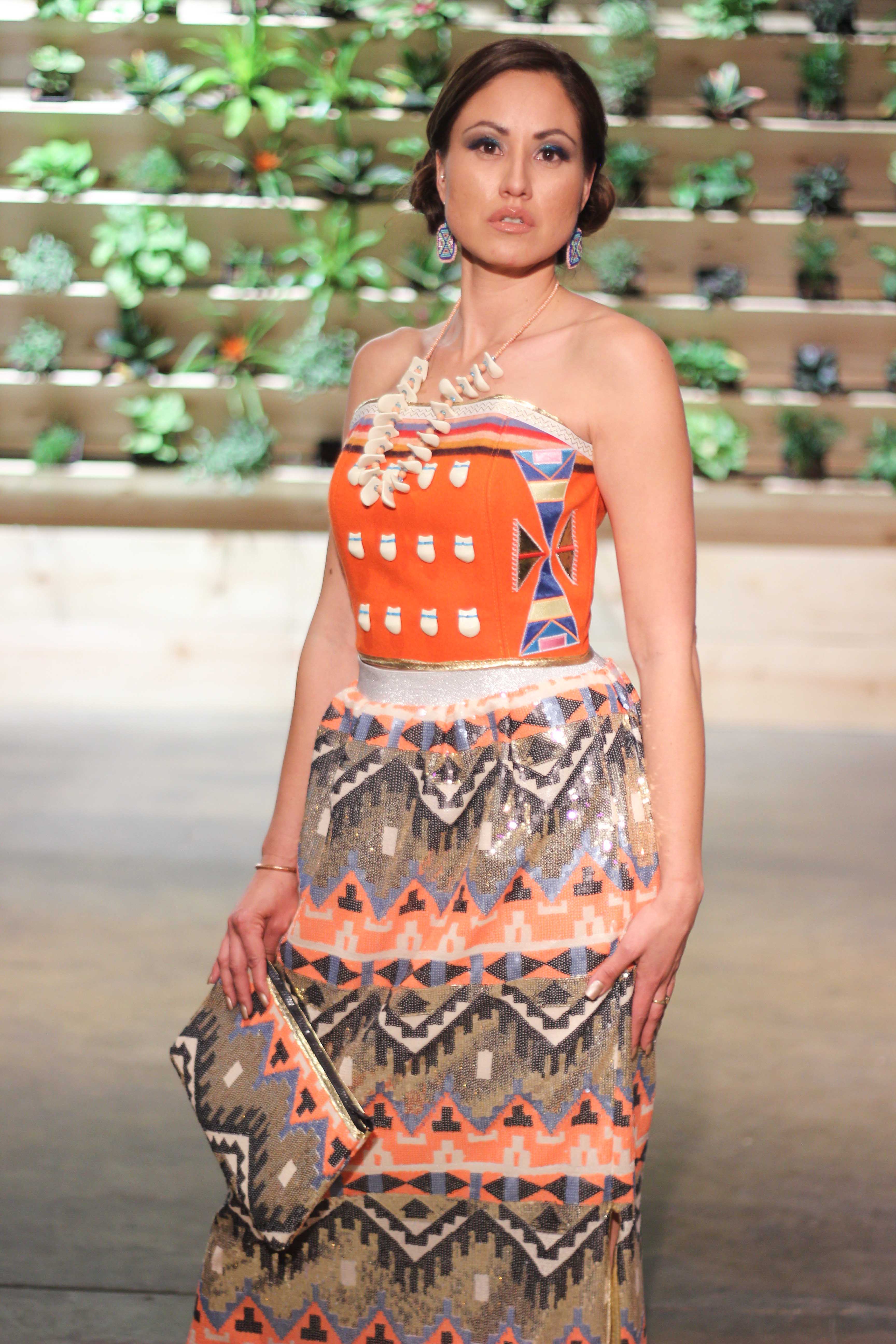 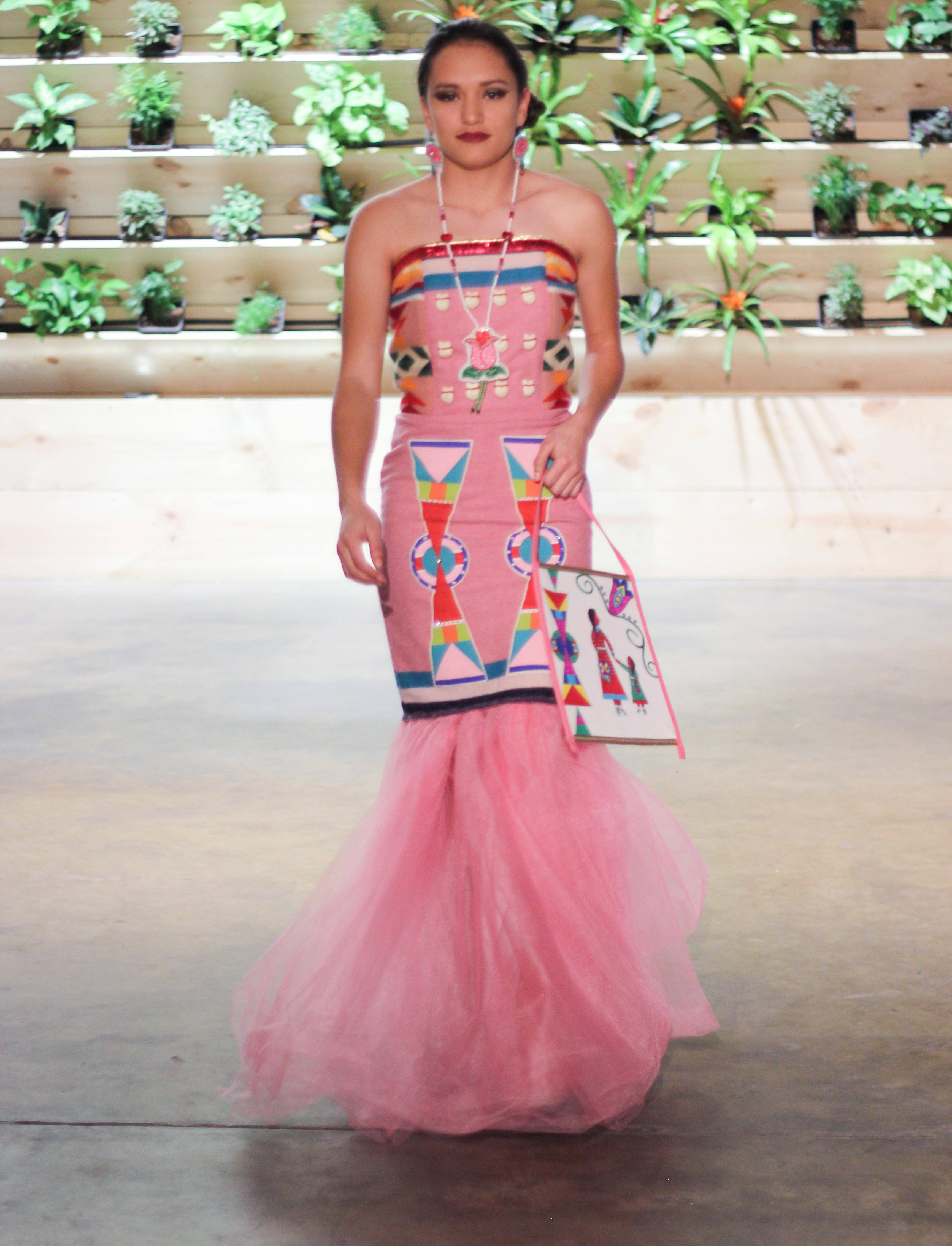 April Ledford (Lumbee) of A.L. Couture gives new meaning to a flair for the dramatic. She takes feathers, flowers, and jewelry to make dramatic statement pieces and wearable art sure to turn heads. Included are pieces that can inspire one of the most elegant occasions or even bring a new level of class to costume design. She wants to share her love of feathers and art-making to bring you pieces you won’t see on everyone. Launched in September 2014, A.L. Couture has been in many different fashion shows and has select items sold in stores. 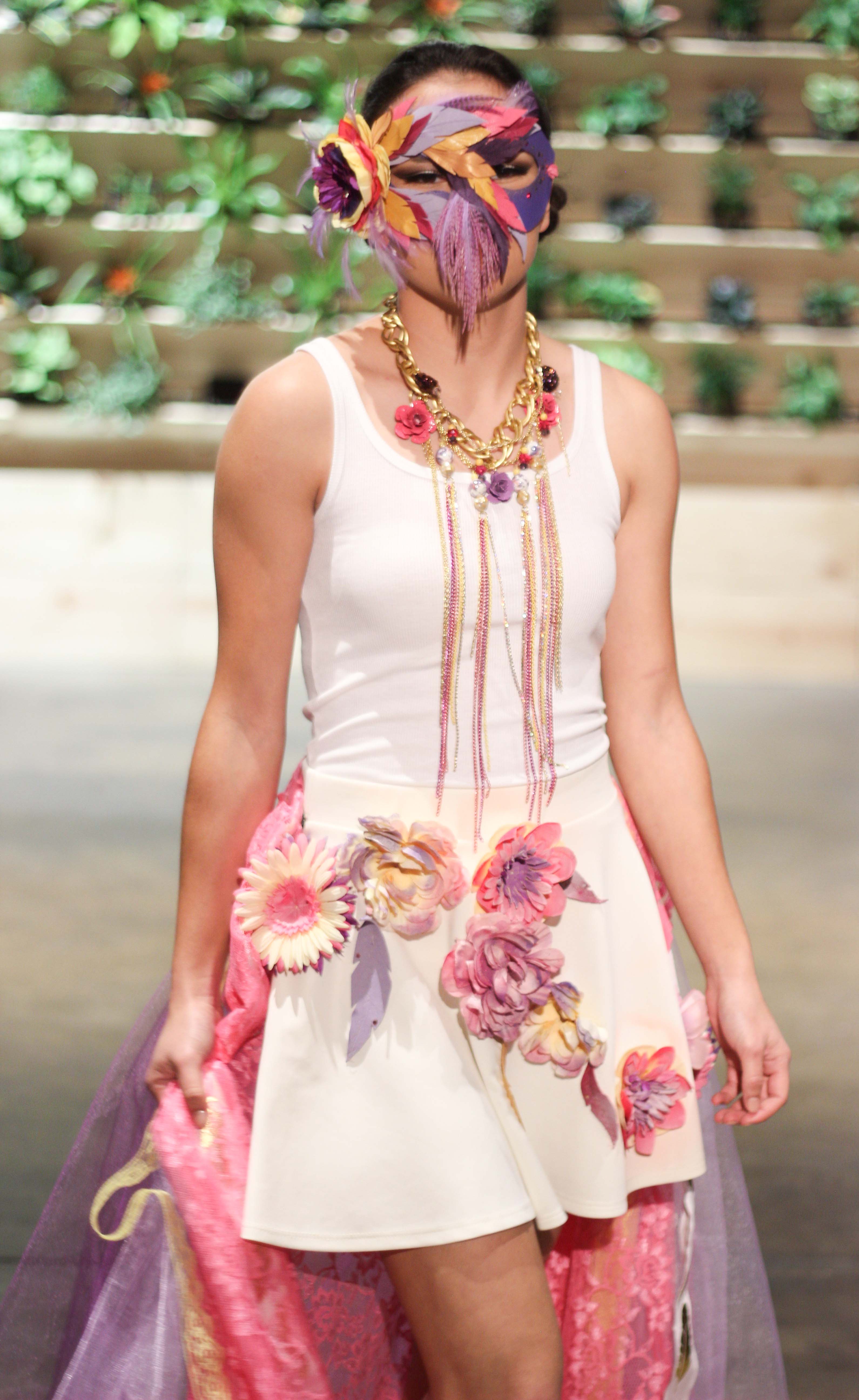 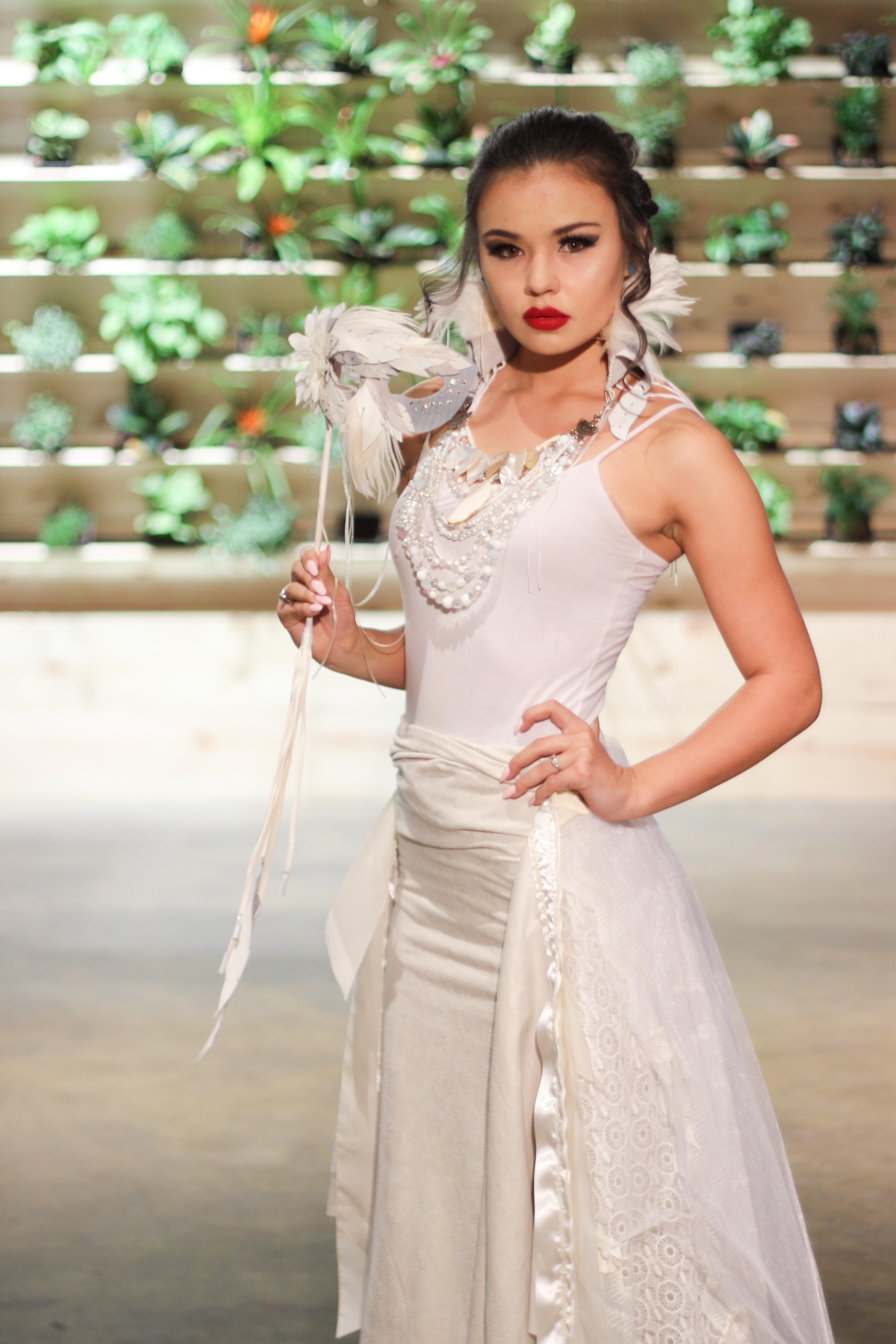 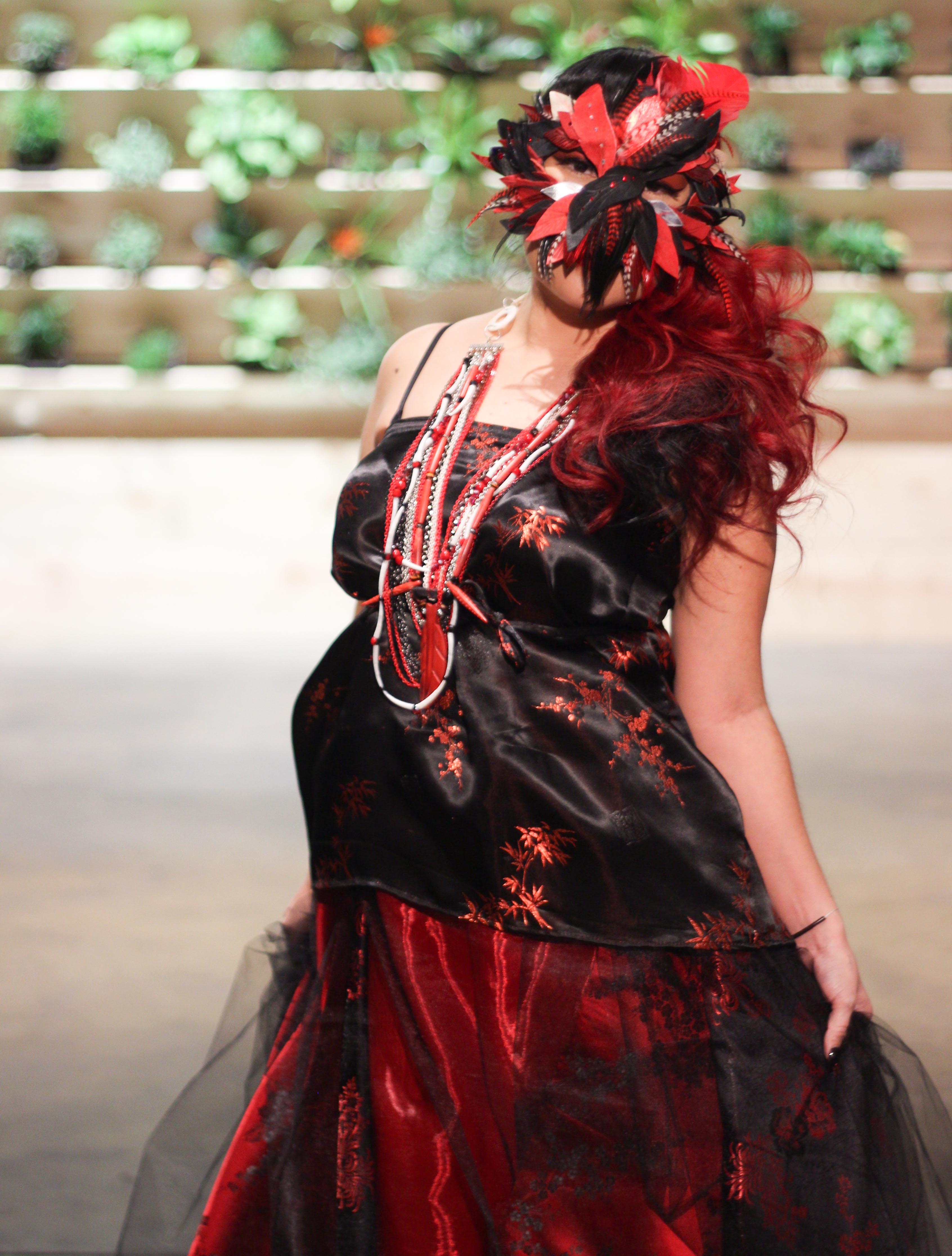 Norma Baker-Flying Horse (Hidatsa/Dakota Sioux/Assiniboine tribes) closed the night with Red Berry Woman, a formal and semi-formal collection inspired by Native design. She incorporates tribal textiles commonly used on traditional tribal wear into contemporary one of a kind pieces. With clothing that literally shines and pulls attention, it was a fantastic finish to a showcase that proved Native American culture as a rich resource for fashion designers. 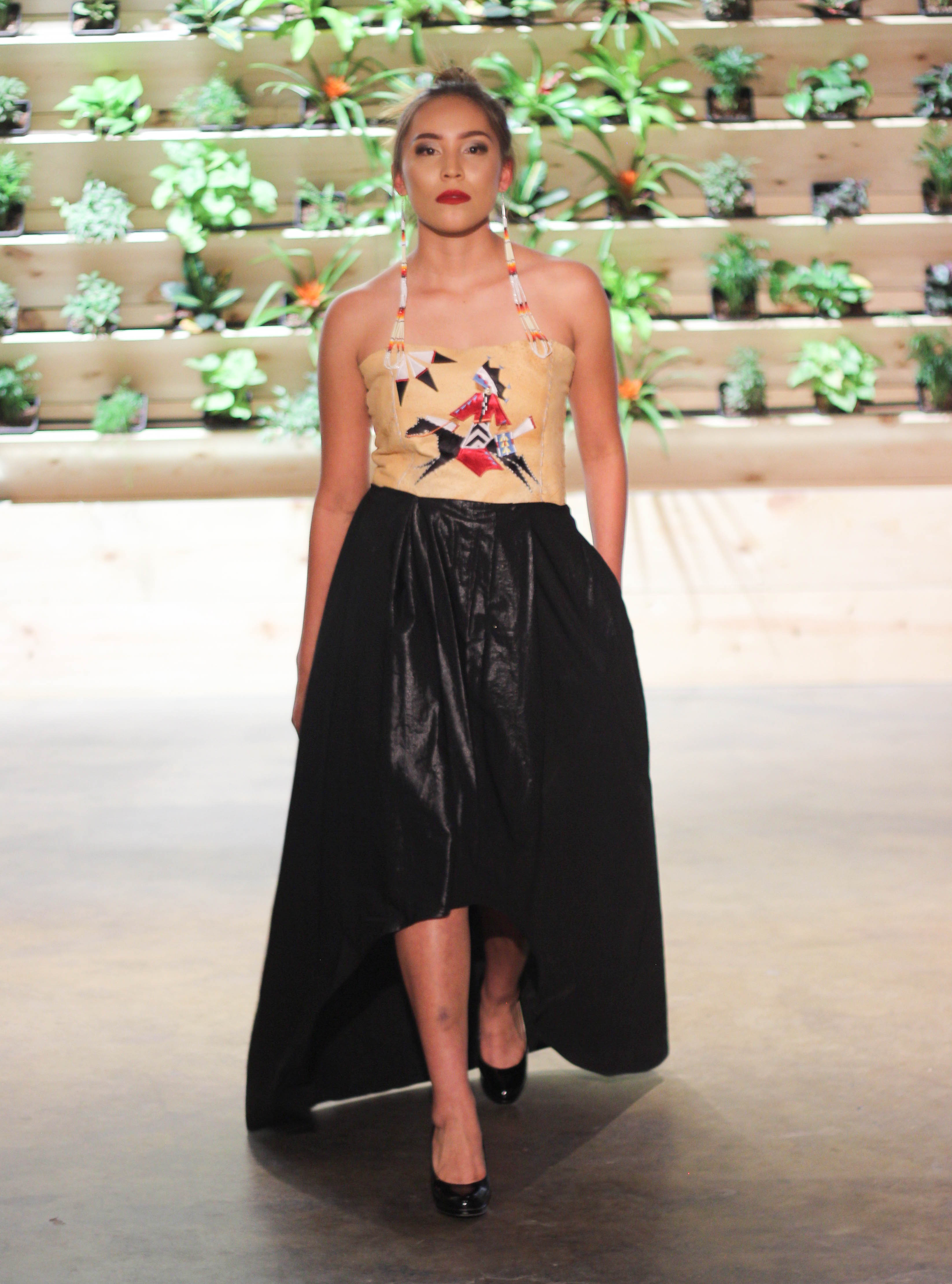 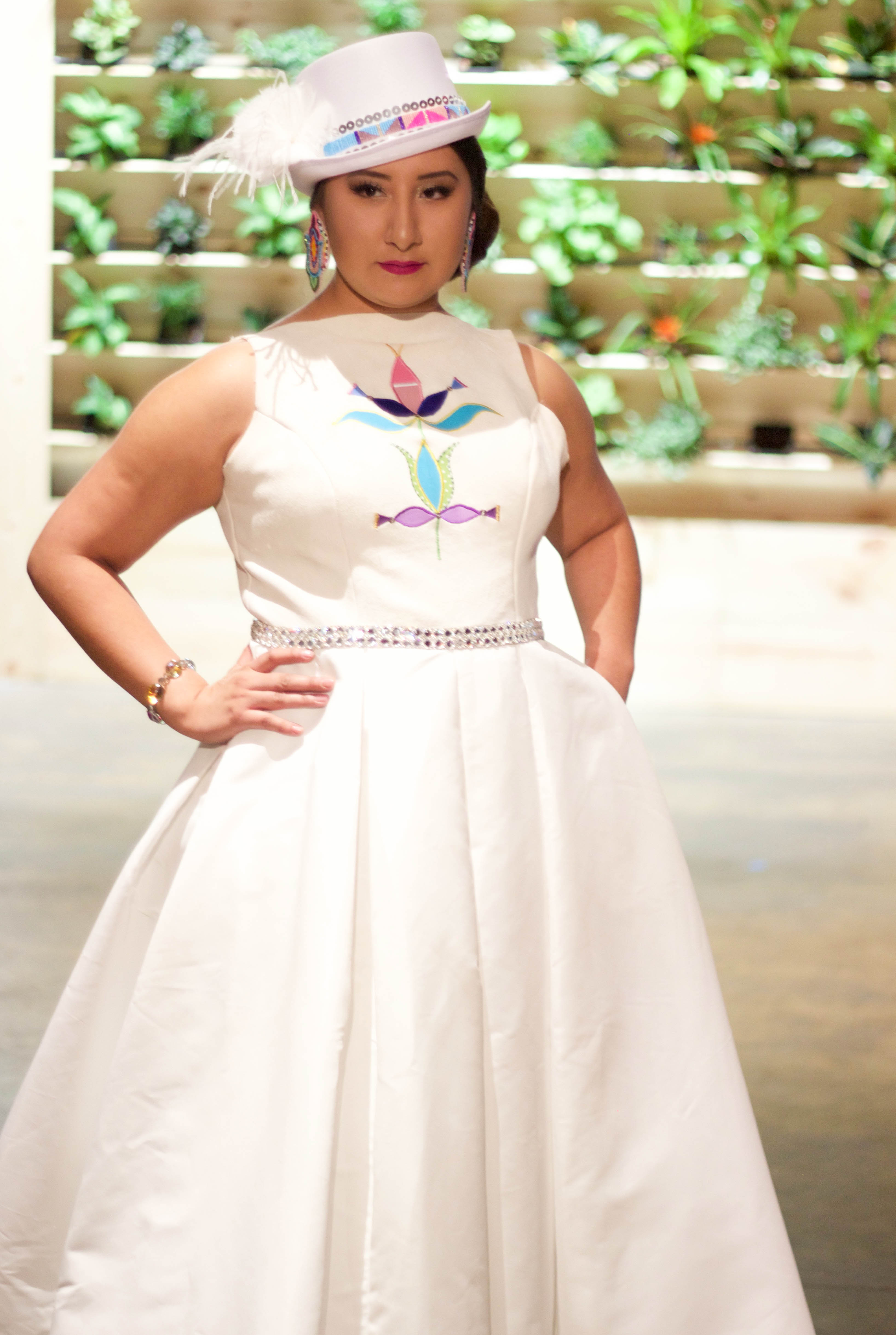 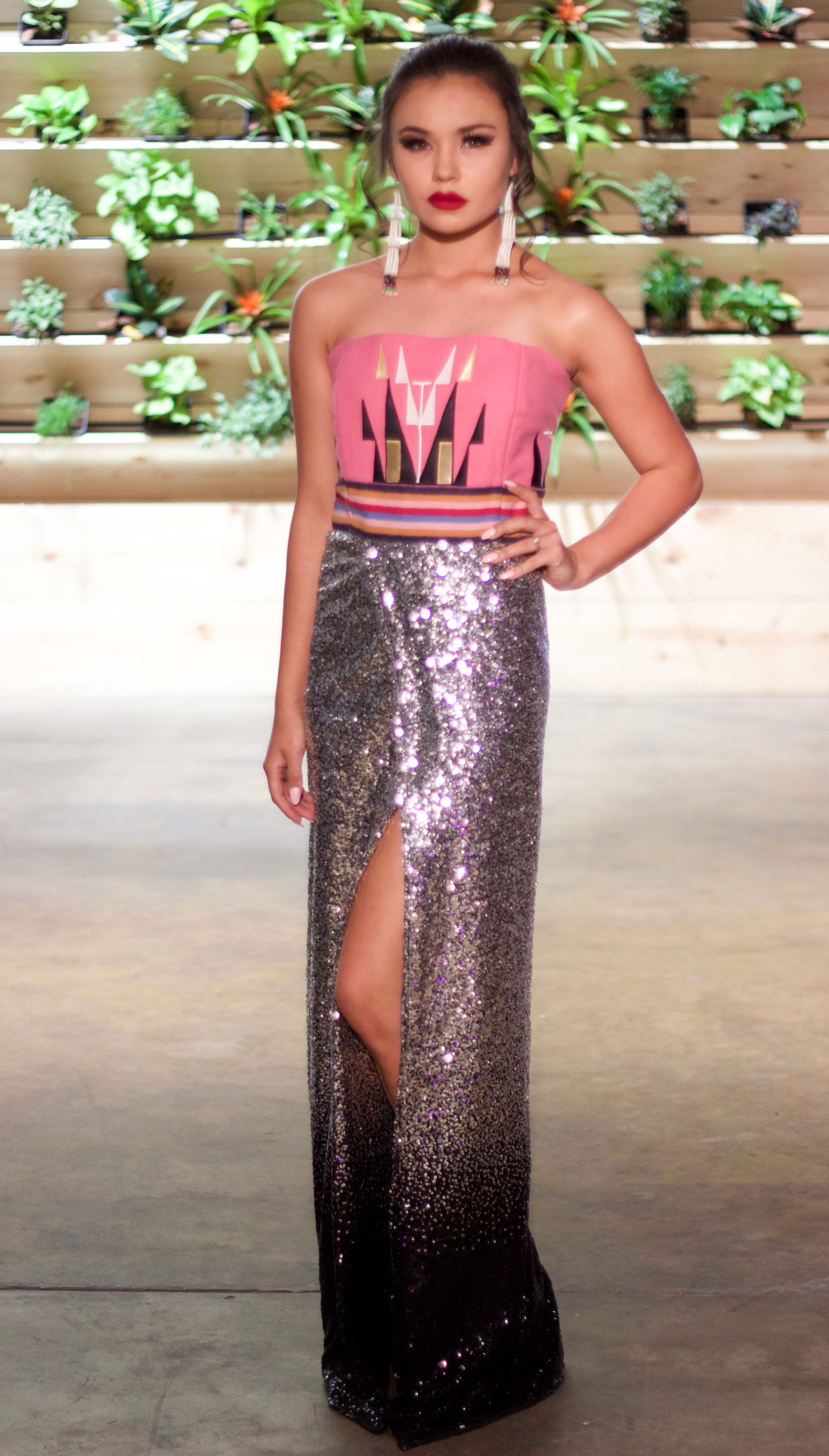 Loren Aragon (Acoma Pueblo) of ACONAV opened the show with a bang, inspired by Acoma pottery designs and traditional dress elements to create modern looks. Aragon brings his expertise as a mechanical engineer into his designs and uses it to further his artistic vision. With evening wear options to dress up or dress down, the Phoenix-based fashion brand aims to connect with the world through shared cultural beliefs expressed through art and fashion. ACONAV also intends to respectfully represent a part of the Native American culture in high-end fashion, with the idea of evoking the empowerment of the female spirit. 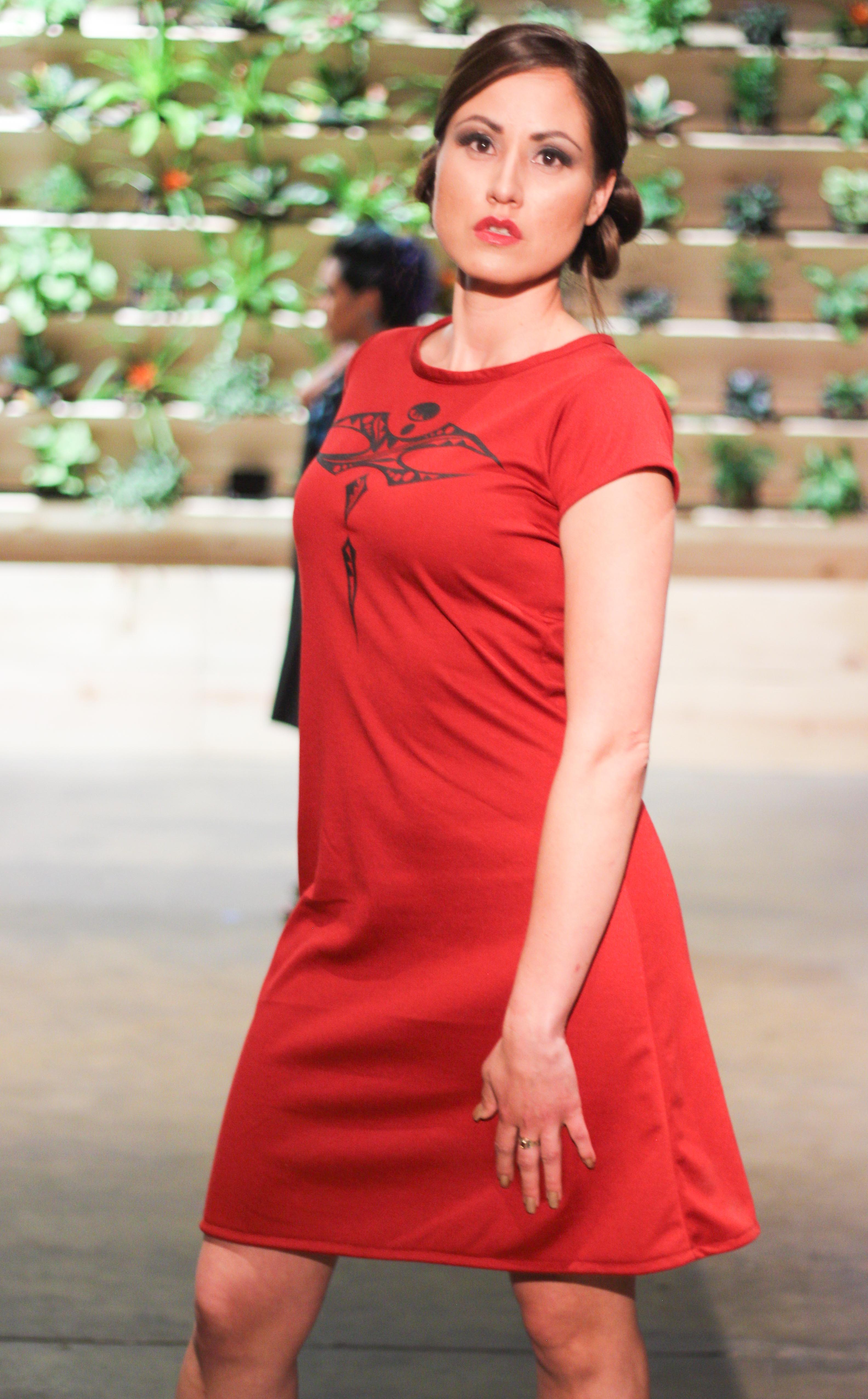 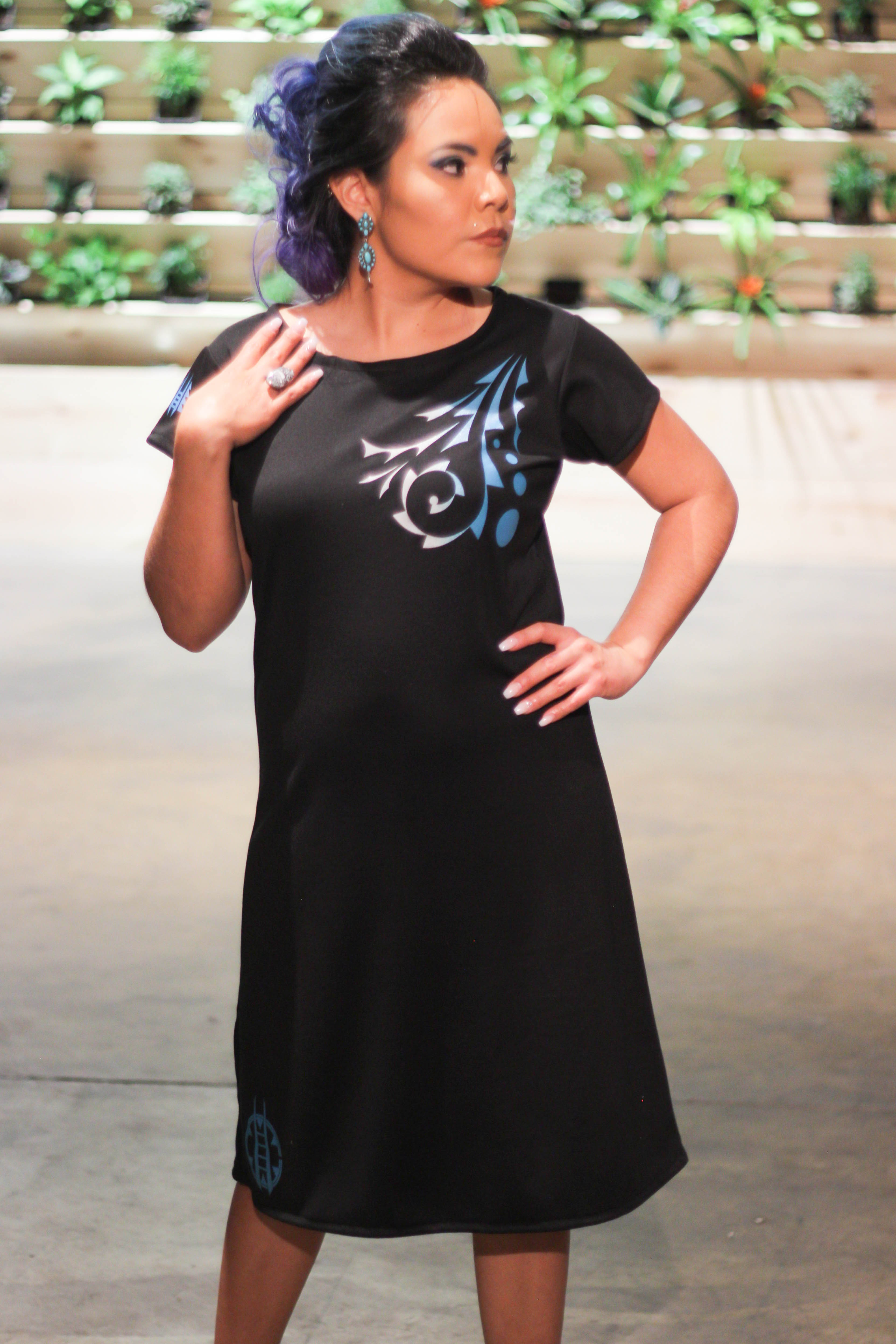 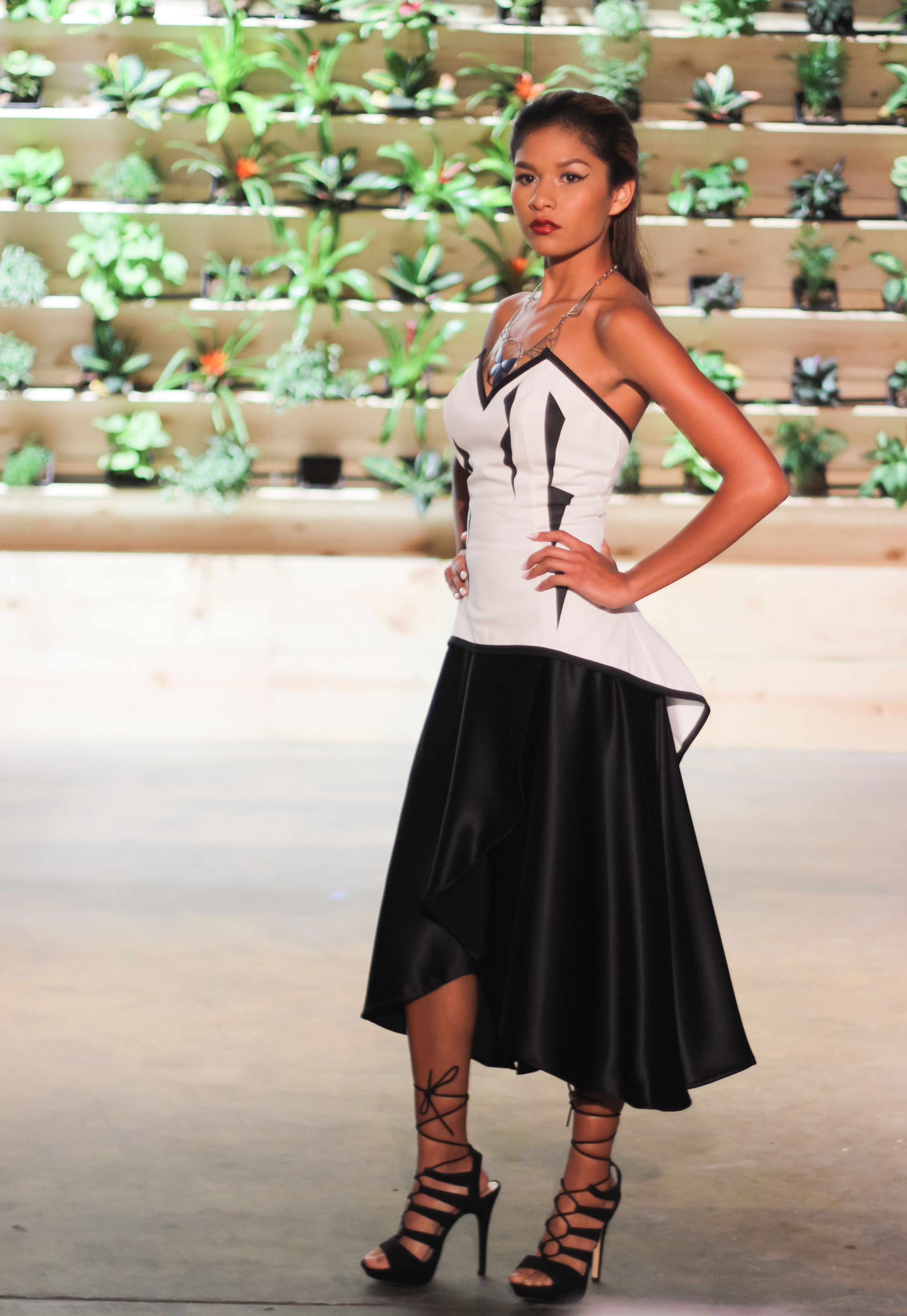 Jared Yazzie (Navajo) wowed us next with his innovative streetwear line OxDx. The Native-owned clothing line based out of Chandler, Arizona, is influenced by Native culture, street art and music. Also, American Indian struggles, issues, and art are common motifs in the designs. Featured were casual pieces for everyday wear (such as leggings, t-shirts, crop tops, jackets) and also pieces with a message. Images of the Dakota Access Pipeline, Christopher Columbus, and even the KKK were a subtle but powerful reminder of the racism that is still faced by people today. Cries of solidarity were heard as a model depicting a NDAPL Protester went down the runway. 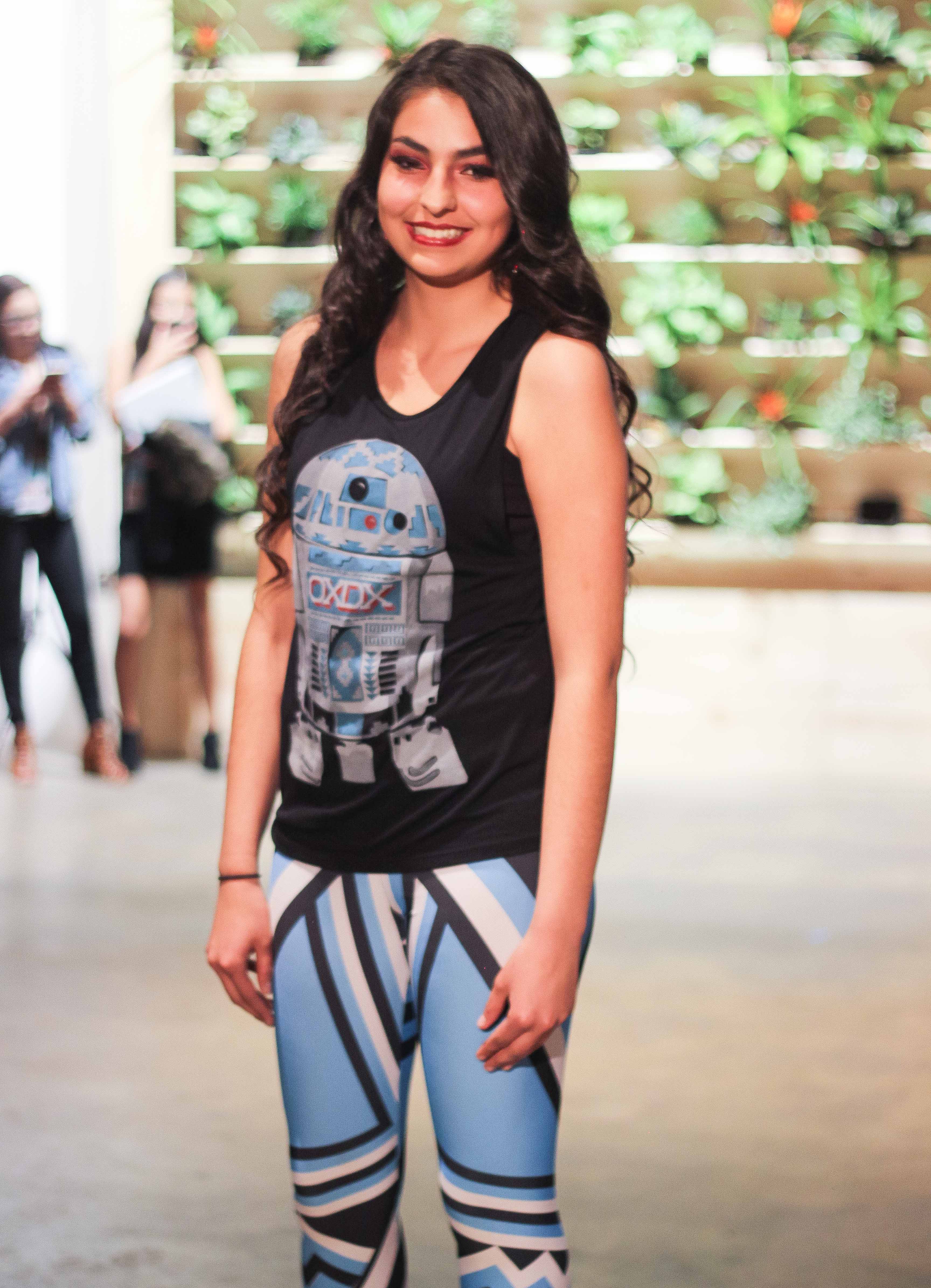 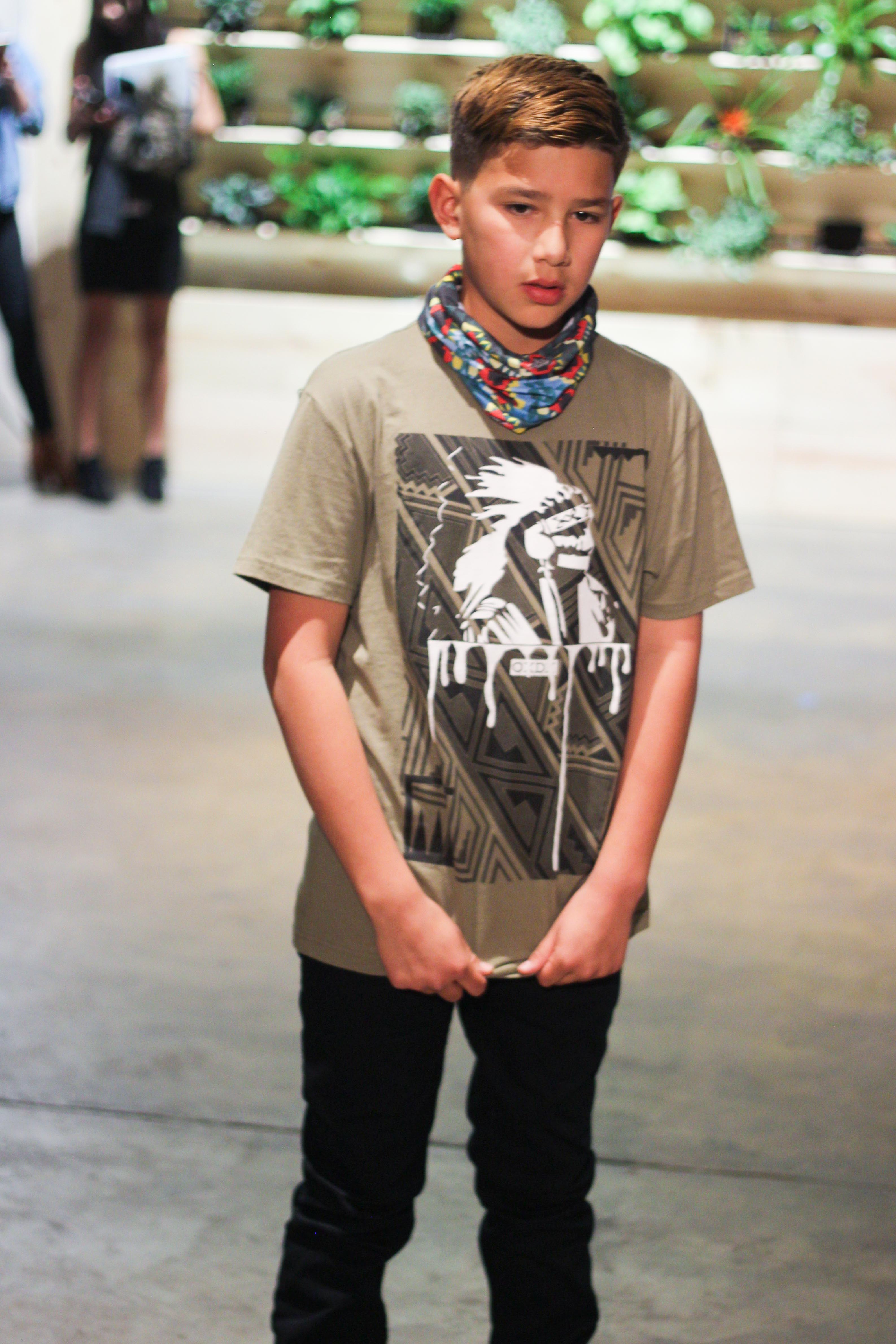 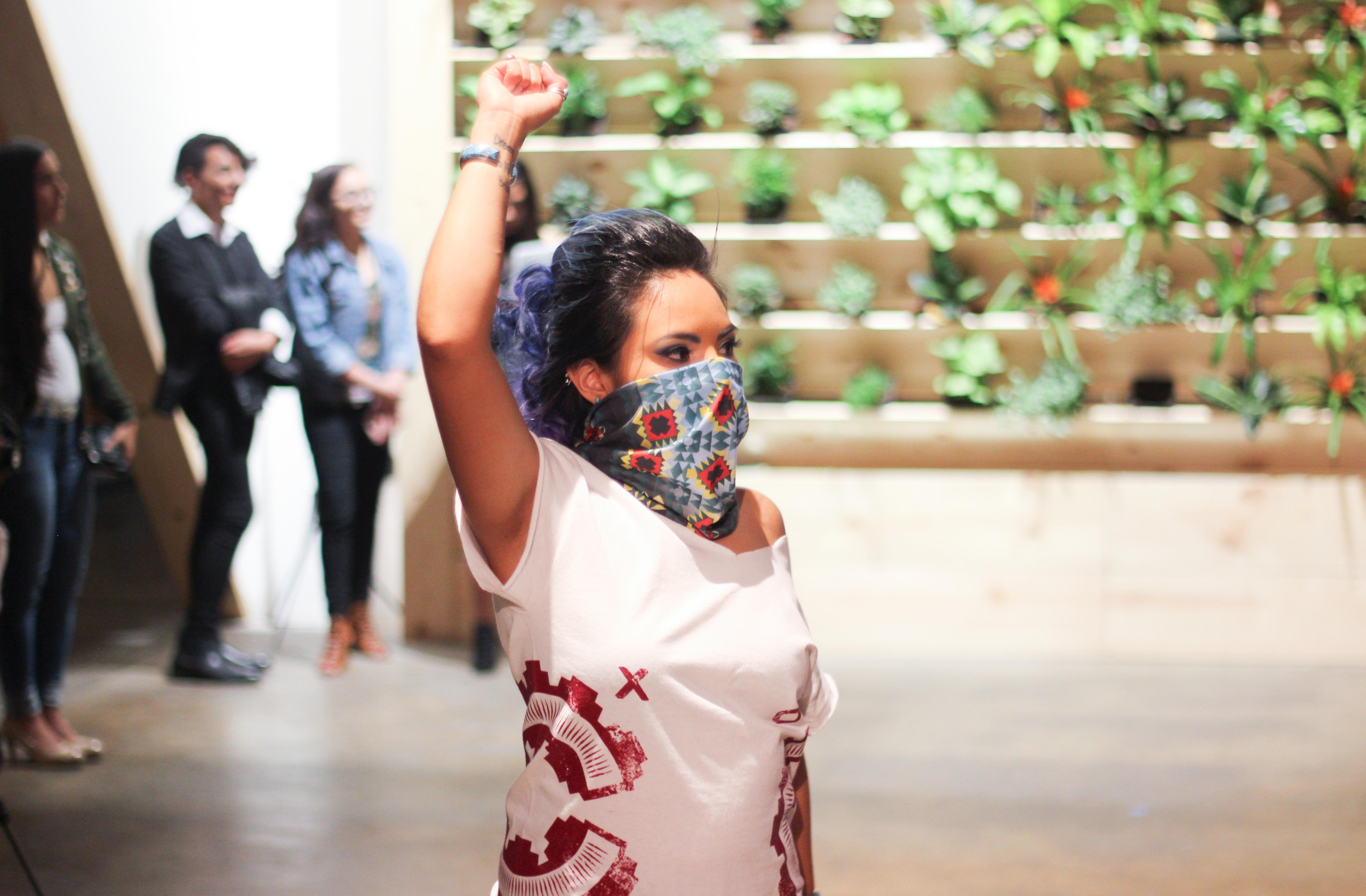 Marisa Mike (Navajo) enchanted us with her chic take on using traditional prints. Her designs proudly incorporate her heritage in dresses that are elegant, sensual and stylish. The self-taught designer immersed herself in the Fashion Marketing program at The Art Institute of Phoenix in 2013. When she returned to her homeland and noticed an unserved niche market, she embarked on the career we see unfolding beneath our eyes. 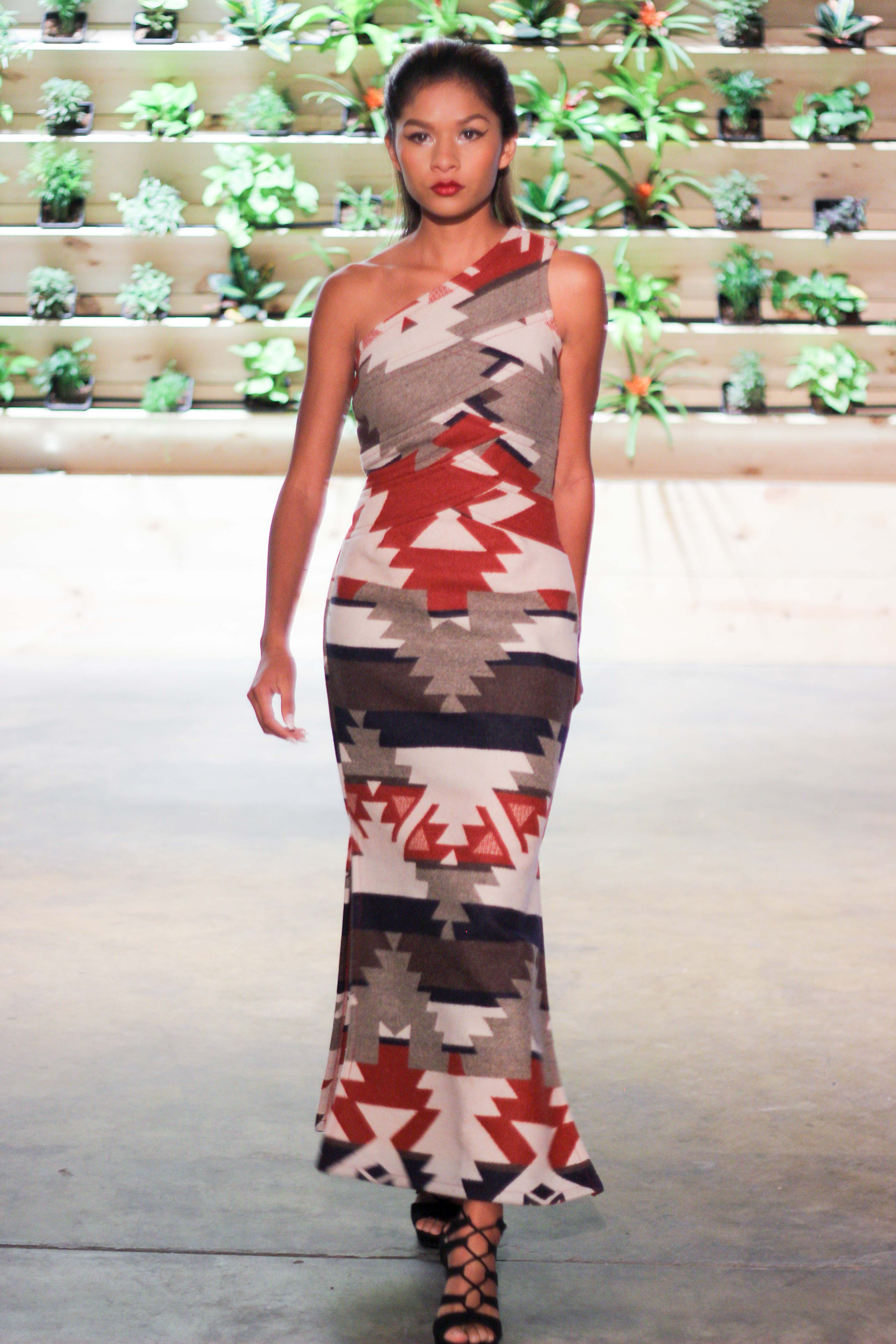 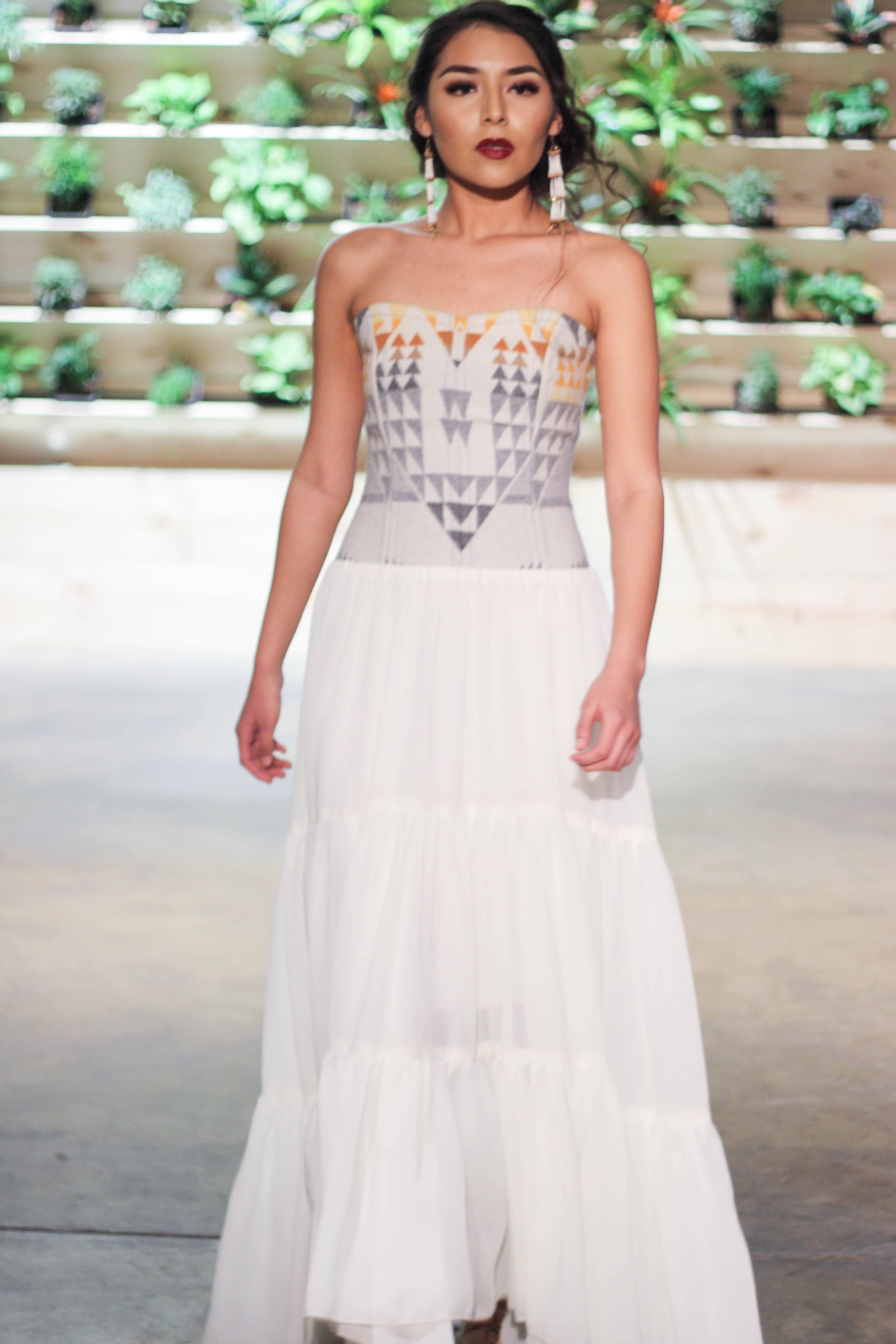 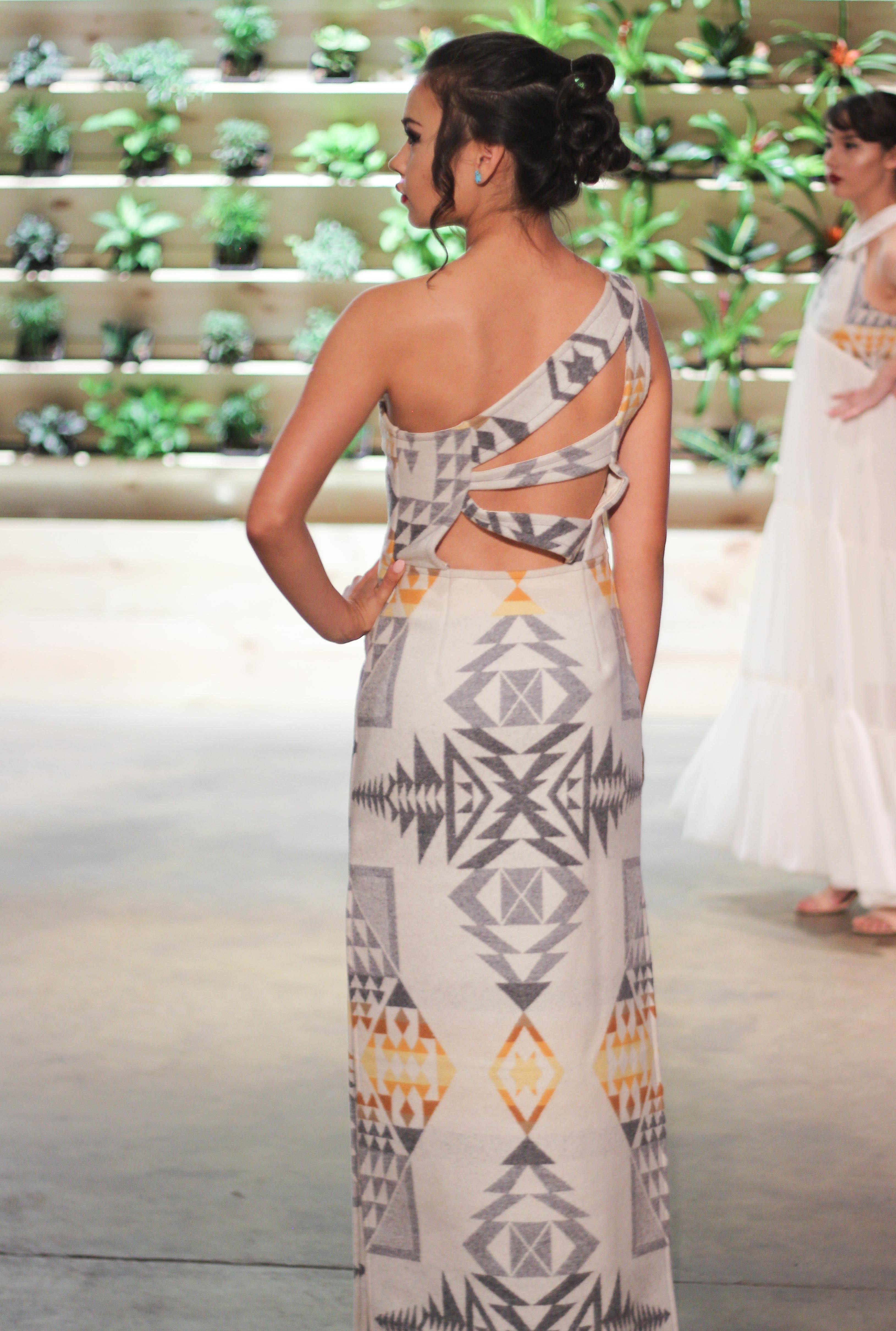 Disa Tootoosis (Cree Nation in Saskatchewan) presented us clothing that combines traditional teaching with modern training. This fusion included garments appropriate for adding flair into your regular wardrobe. The mother, grandmother, designer, and pow-wow dancer finds her inspiration in pow-wow culture and the red carpet. Tootoosis received her A.A. degree in Fashion Design from Brooks College in California. One of her earliest memories includes watching her grandmother sewing and making patterns out of any paper she could find, and sometimes using knots in a string to mark measurements. This early introduction would eventually inspire her to pursue her passion for clothing. 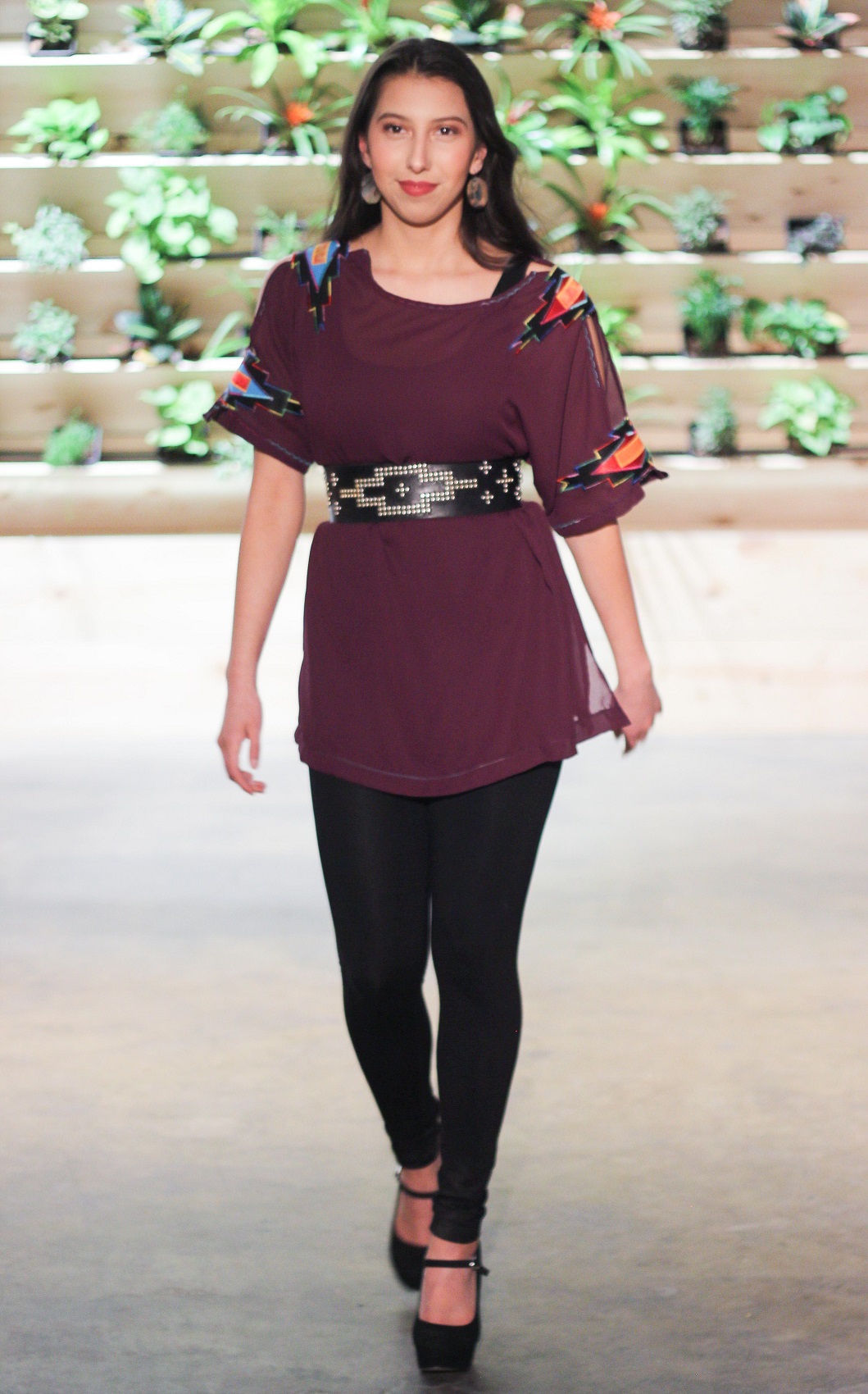 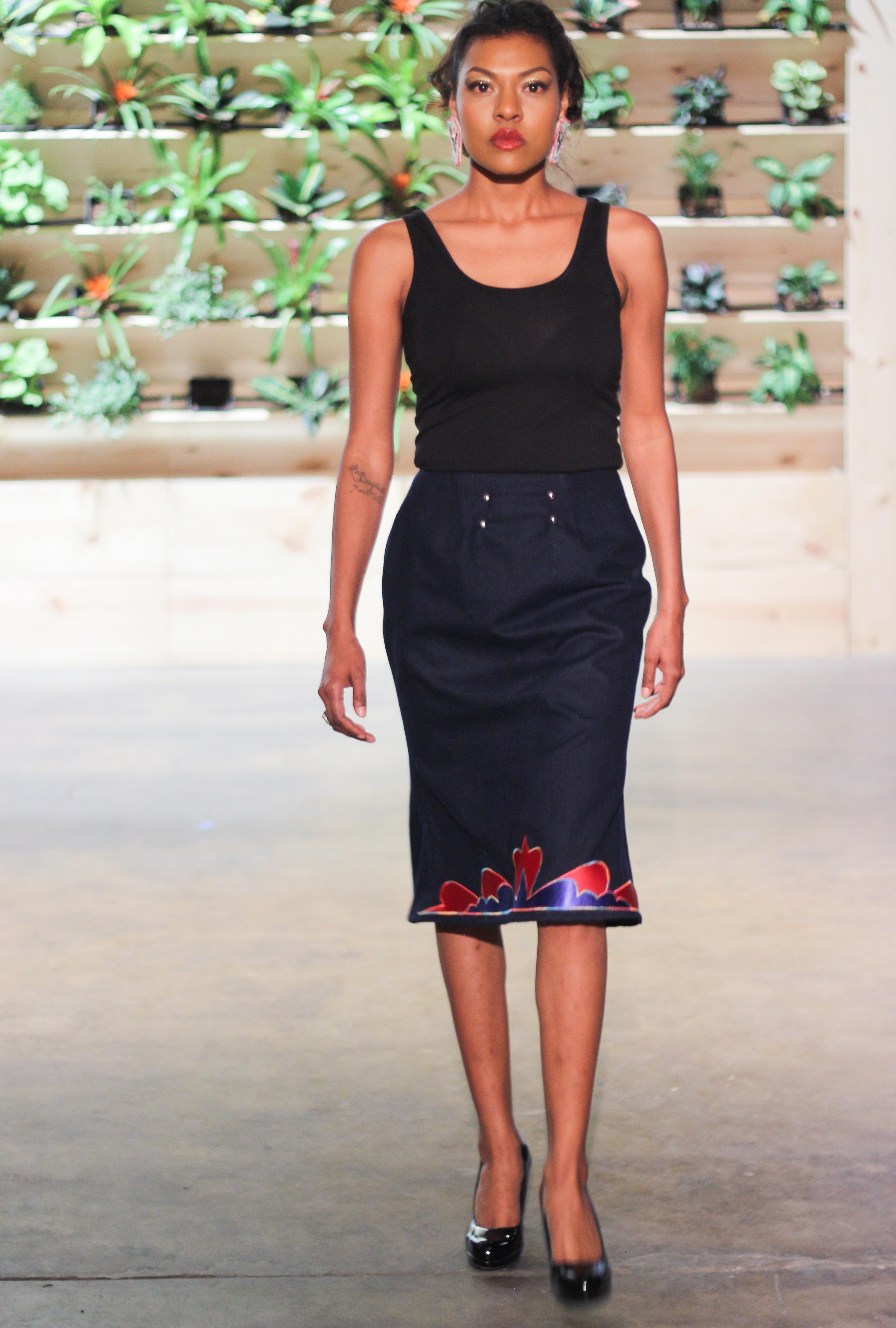 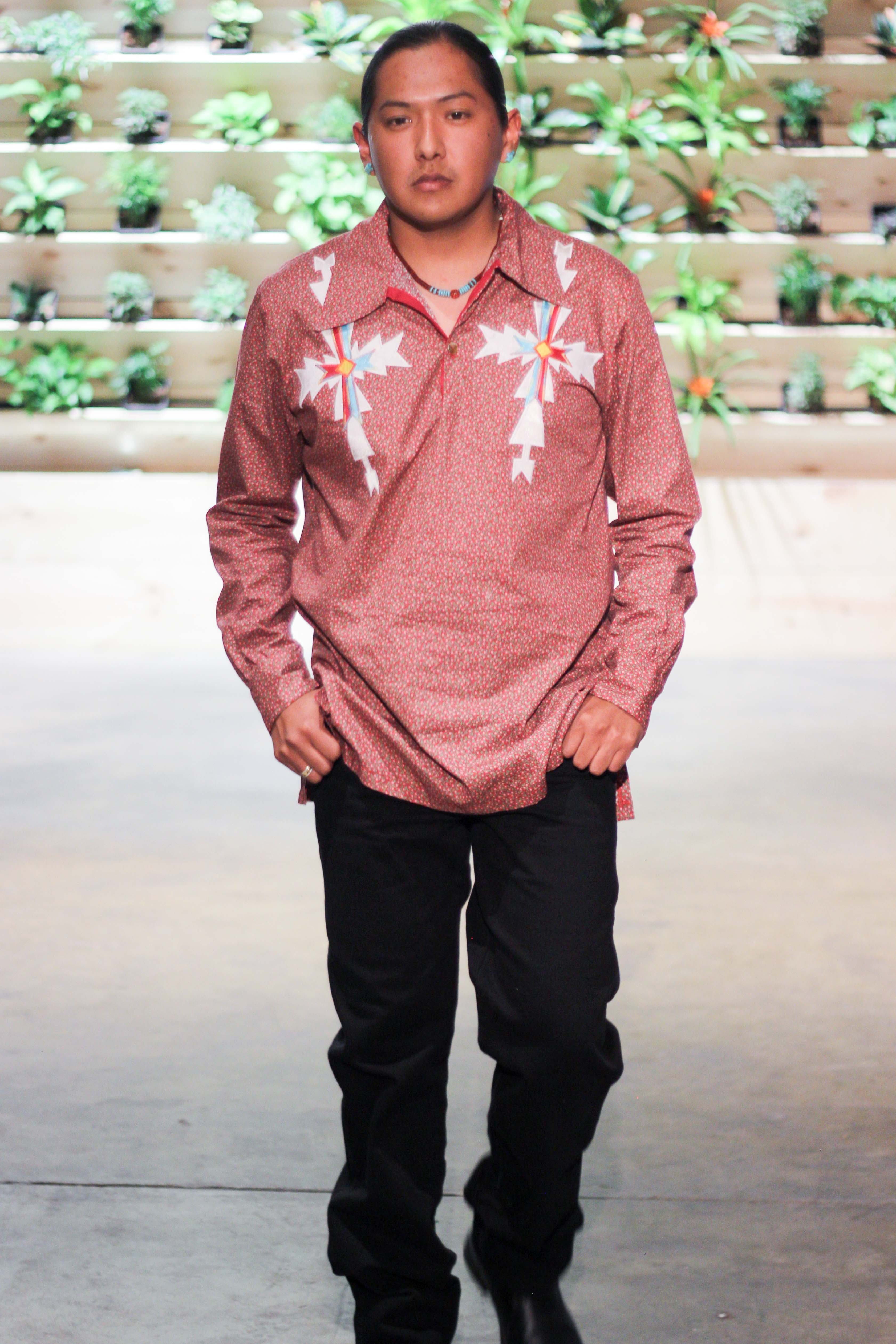 Designer Lakota Sage (Lakota) presented Native Gorilla, a lifestyle brand that’s constantly growing through the support of an ever-growing community of influential individuals, intriguing projects, and genuine ideas. Inclusion of brands like Native Gorilla ensures that there’s something for everybody as tank tops, shorts, snapbacks, tees, and other accessories were shown. Native Gorilla is inspired by the unexplored talents, undiscovered musicians, artists, athletes, and dreamers.  Their mission is to inspire peace, love, and spirit through the creative pursuits. 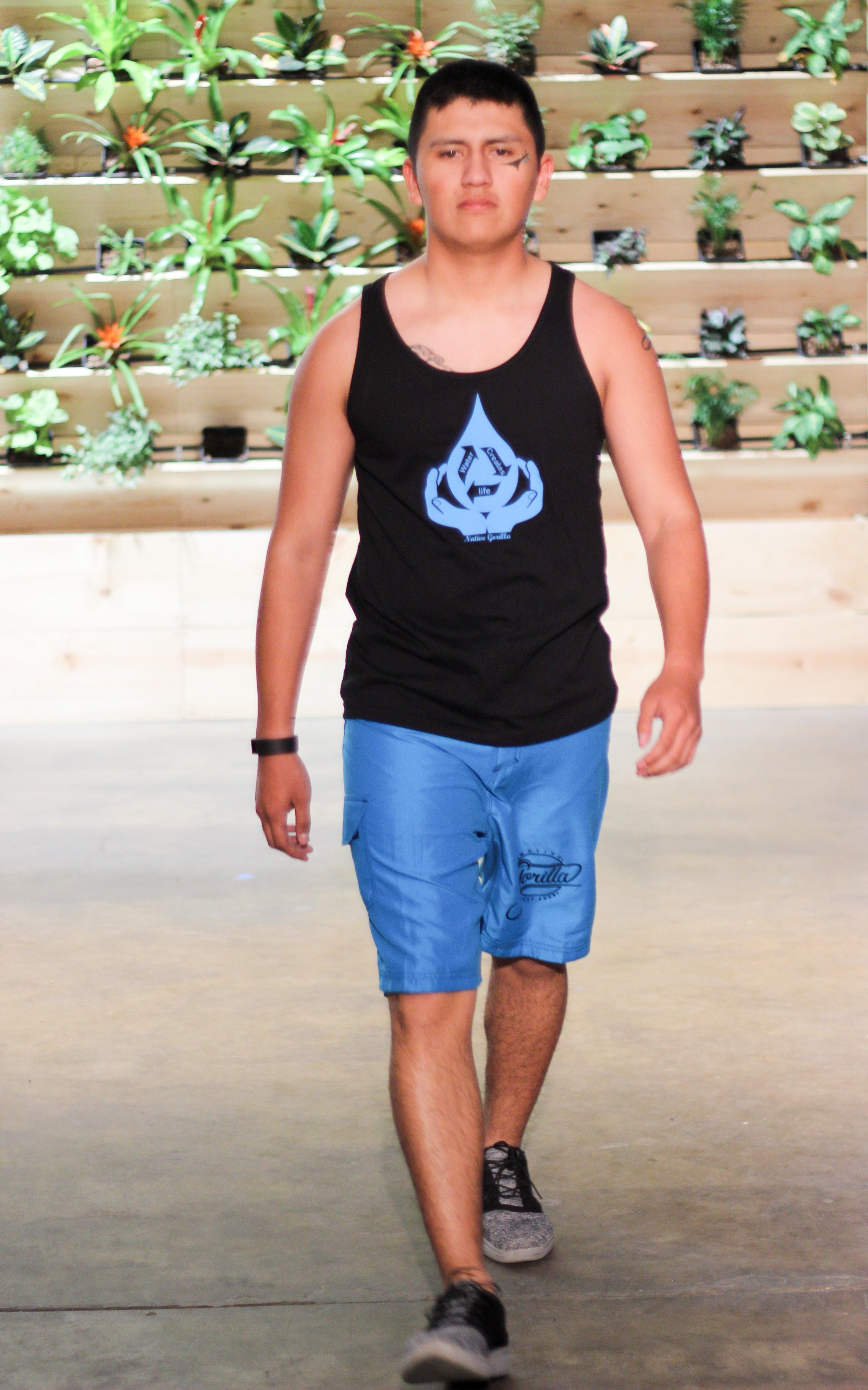 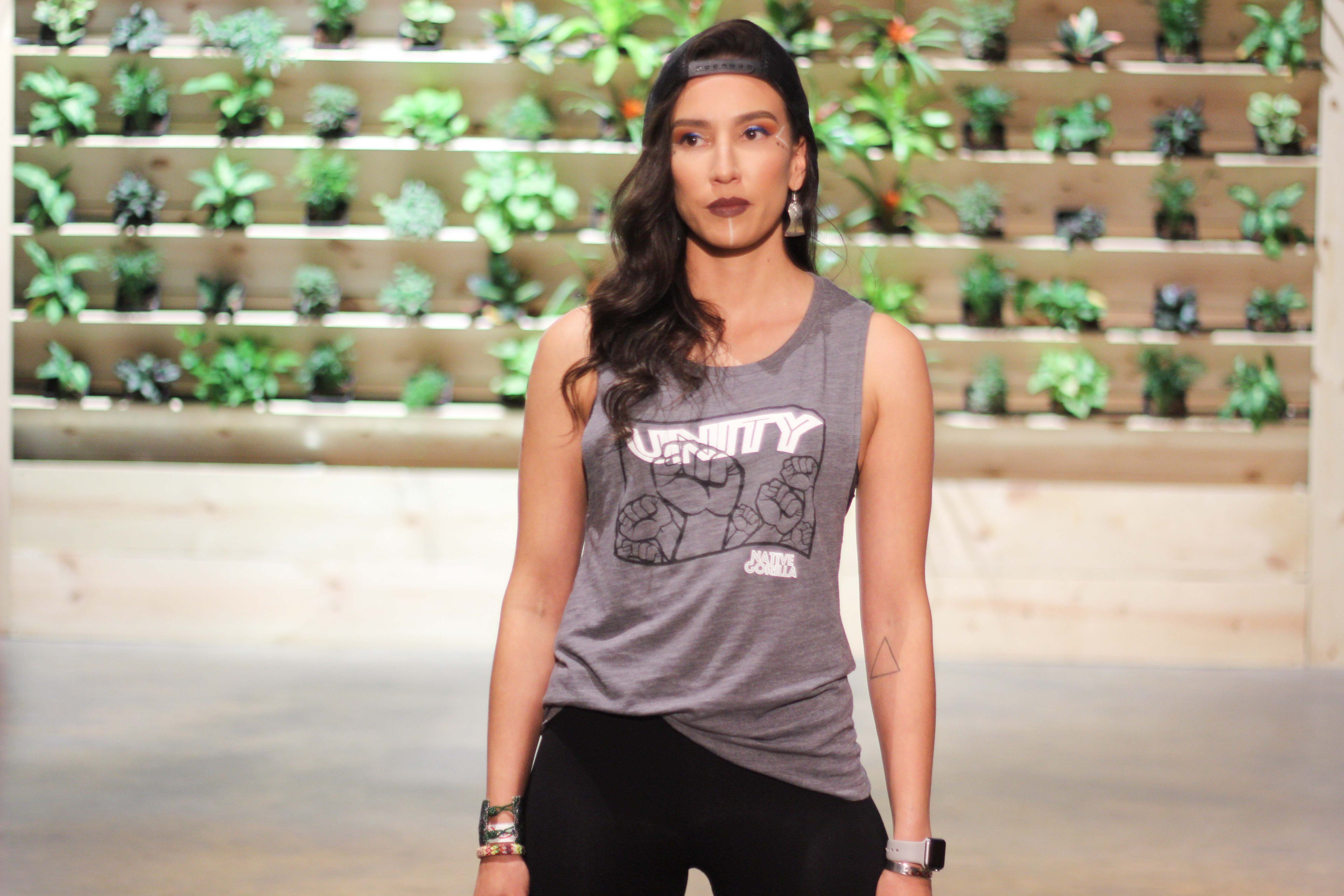 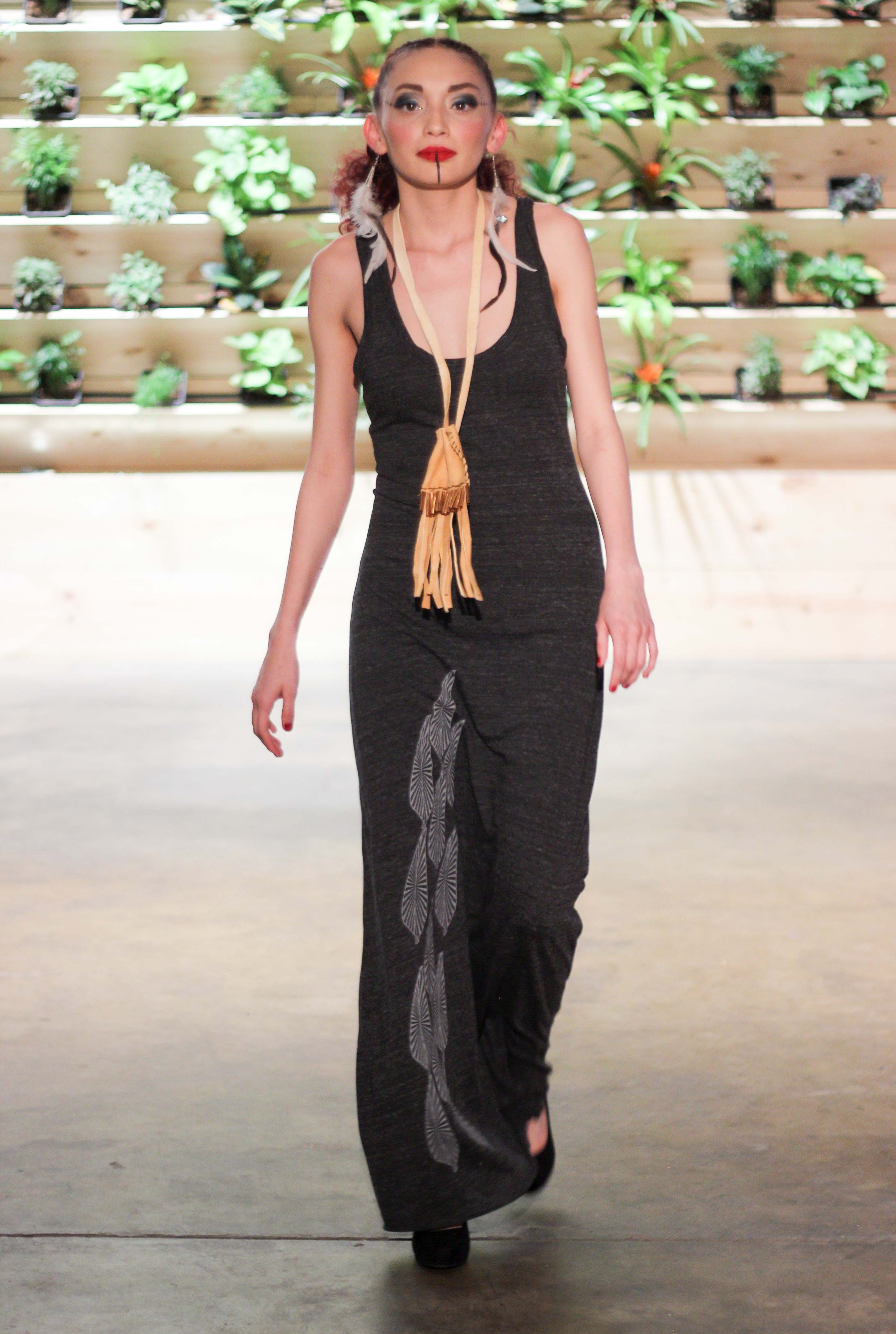 Be sure to check out Native Fashion in the City next time it rolls through Denver.