When Jacob Lee Rockwell discovered the idea to begin True Grit in 2014, a men’s grooming line, it was actually under extremely grim circumstances. The wedding and event decor designer was working at a bar when he got a metal sliver in his hand that turned into necrotizing fasciitis, a flesh eating bacteria. Things continued to worsen as he experienced kidney failure, lung failure, and fell into a coma for two months in which he flatlined twice. Since Rockwell’s case was dire, many gave up the hope of him returning to consciousness. “My aunt from Pittsburgh and my best friend from Michigan flew out to say their final farewells and then I miraculously pulled through. When I came out of the coma my beard was nasty. It was eight inches long, full of flakes, and there was inflammation in the skin underneath.” Rockwell recalls. Shortly thereafter, he began to work at his aunt’s homeopathic medicine company Mediral International since the damage to his hand limited what he could do with his decor company, Level Creations. Looking at the condition of Rockwell’s beard, his cousin mixed a concoction of olive oil and tea tree oil to get rid of the flakes and inflammation. A highly successful result inspired Rockwell to realize that there was a whole market and demand for similar products.

“Whatever you put on your body, your body absorbs,” Rockwell said. It’s this safety principle that leads him to put on a hazmat suit and head into their FDA registered lab in Park Hill, the only Denver men’s grooming brand to do so. “Our ingredients have to come from the manufacturer with a Certificate of Analysis so we know exactly what we are buying and selling to the consumer. All of our ingredients go through rigorous testing when they come into the laboratory, tested for any bacteria or anything else that might be in the actual ingredients. Testing is FDA regulated,” he said. 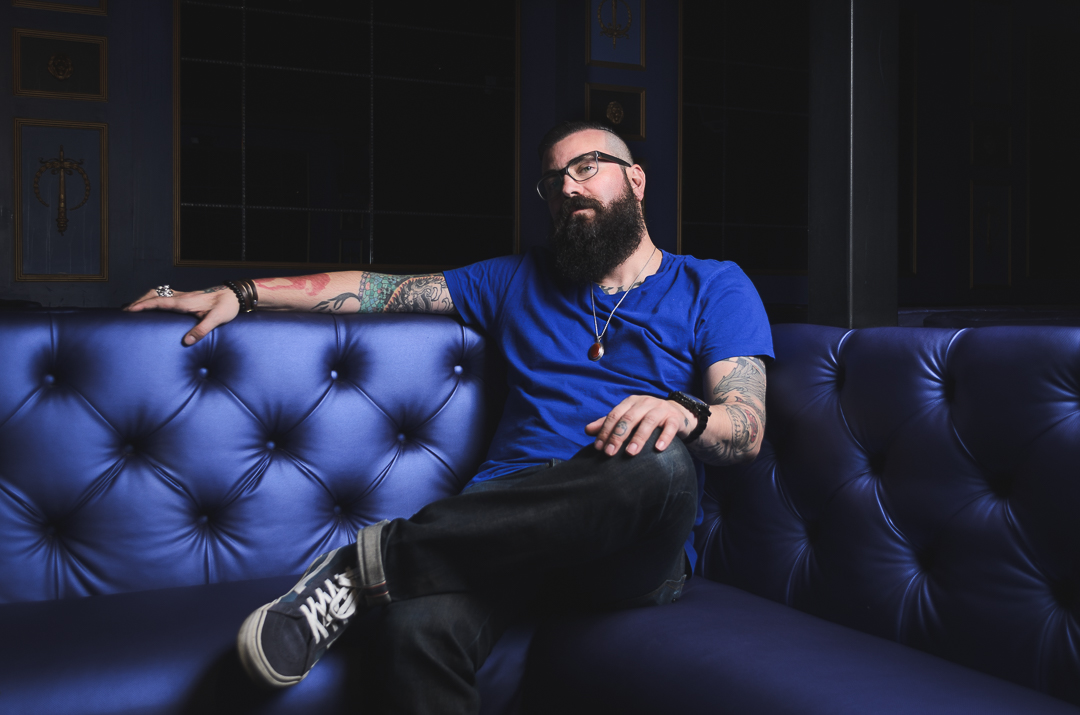 Photos taken at Privé At Dorchester 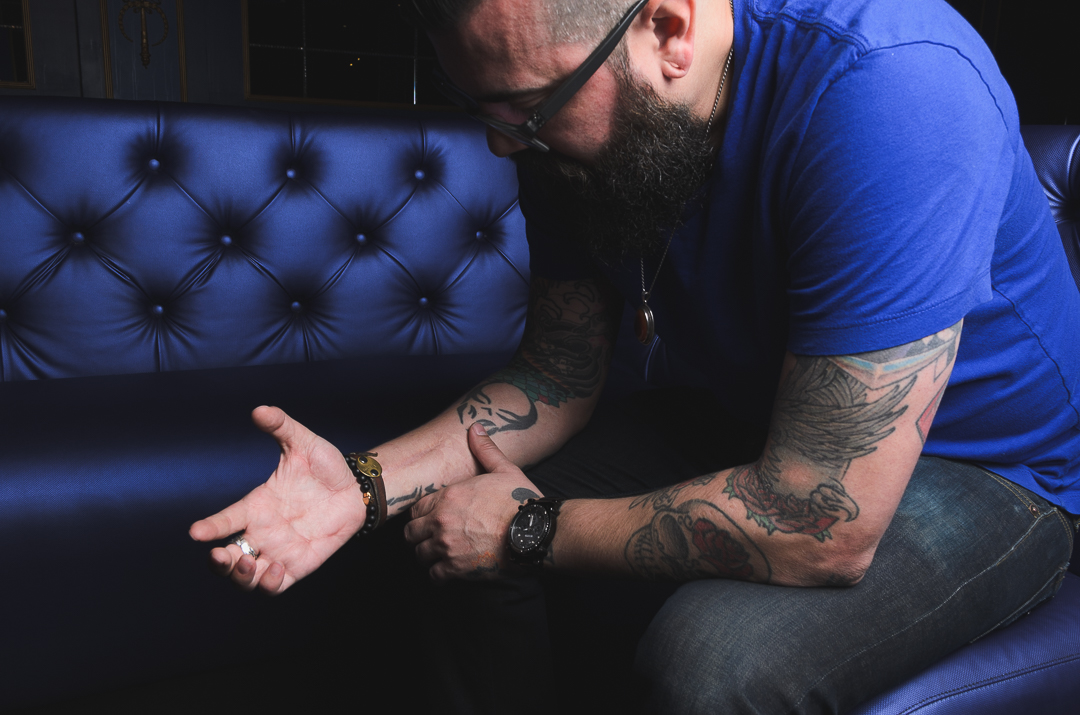 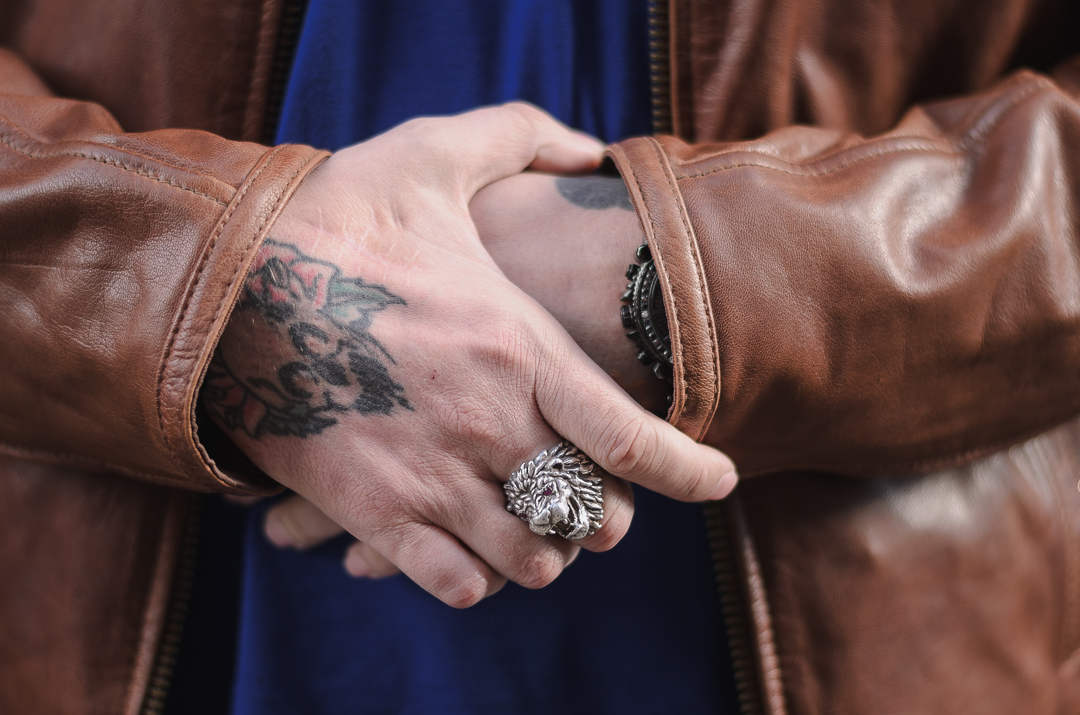 Taking on a new business venture after a experiencing a life-threatening season led Rockwell to the name True Grit. “True Grit means courage, resolve, and strength of character. With my hand, with the hospital, and dying, the name fit perfectly for everything I had just gone through.” He said. “Also, this is a men’s grooming line for every man that has grit. You can be an oil rigger or one of the top sales guys at your company, if you’re either of those guys then you have a lot of grit in what you do, and in your attitude, and your nature. That’s what our brand represents.”

With the lab at his aunt’s warehouse at hand, he also realized the capability to make products in the cleanest possible condition.

“I felt there was a need for an all natural full men’s grooming line. Something for men who put a bit more thought and style into their daily grooming routines. As a man who’s into fashion and has more shoes than most women, I like options. I don’t believe there’s enough options with men’s products. There’s the big names like American Crew, which is more for hair, but we wanted to be an all-around men’s grooming line that you can use on your beard, on your face, in your hair, in the shower.” Rockwell said.

True Grit also takes all natural to heart. These are products that aren’t going to dry your skin. All their beard oils have tea tree oil that kills any bacteria and keeps the beard clean. Also, their beard oil has a caster oil base that promotes hair growth. The shave soaps have bentonite clay, which is used in certain masks and exfoliation.There is no animal testing involved and there are no animal byproducts. 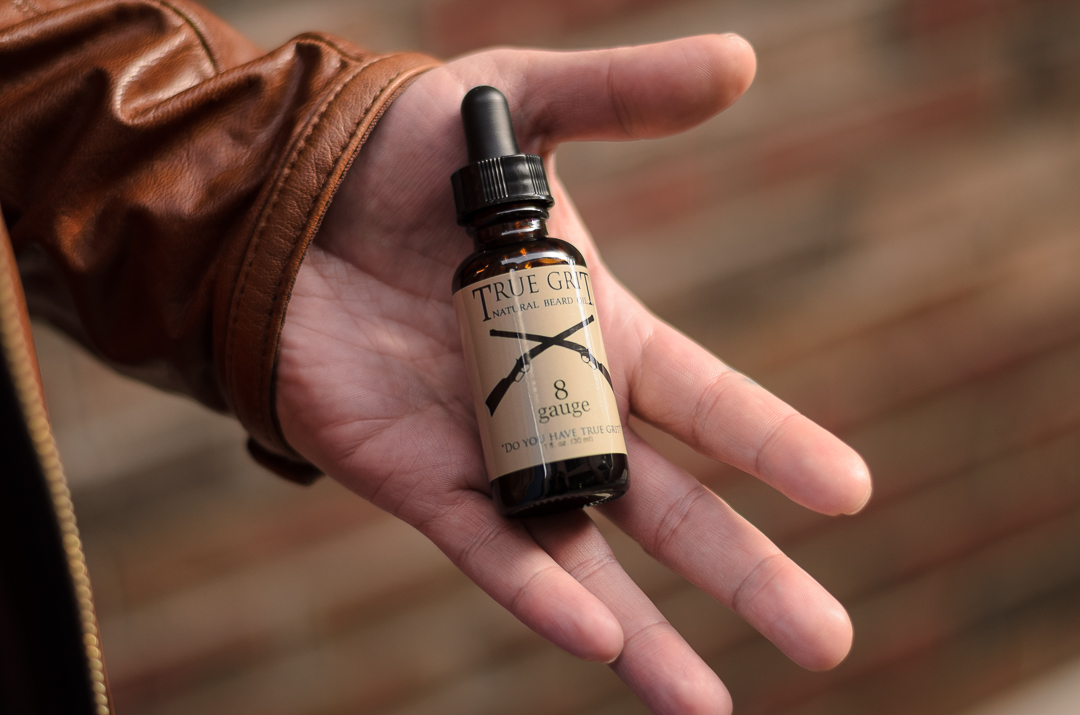 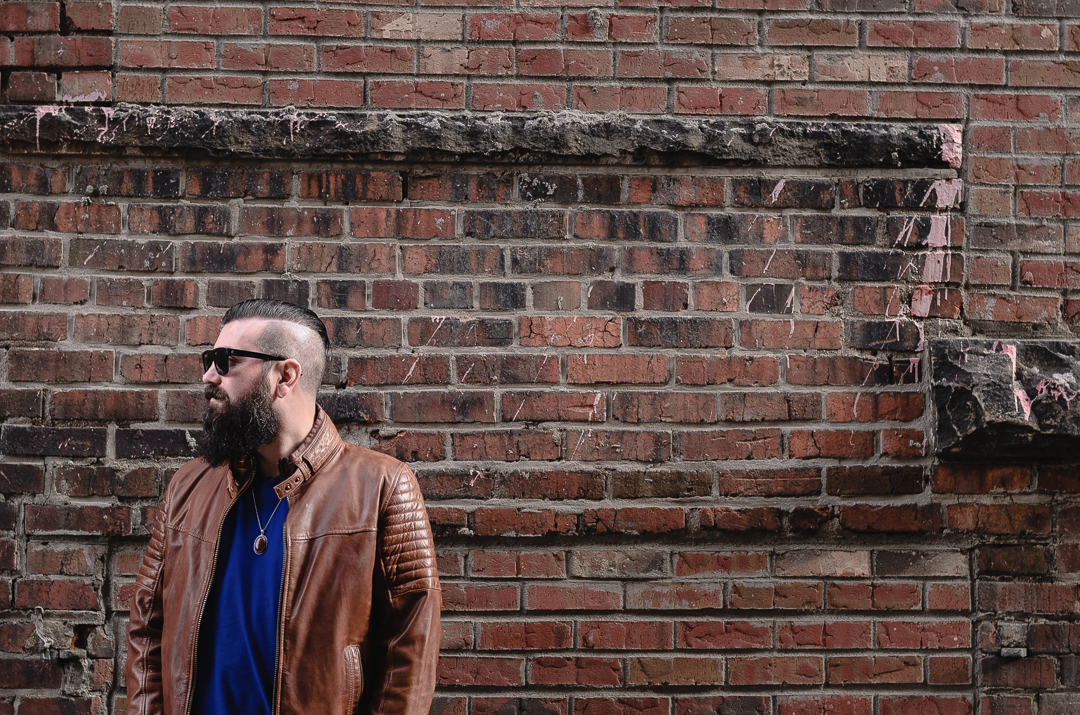 One of Rockwell’s hopes is that Denver men see the quality in True Grit above the competition because of the extra mile they take. “Quality is everything to us,” He said. After the product is made, it goes through retesting to make sure there is no bacteria. Men’s grooming products aren’t required to go through an FDA Lab, but Rockwell takes the extra step to assure we’re getting the best quality product. A typical day in the lab includes gearing up, mixing and melting ingredients, pouring, and product testing. Products are then sent out for labeling and packaging, and from there into the hands of customers. 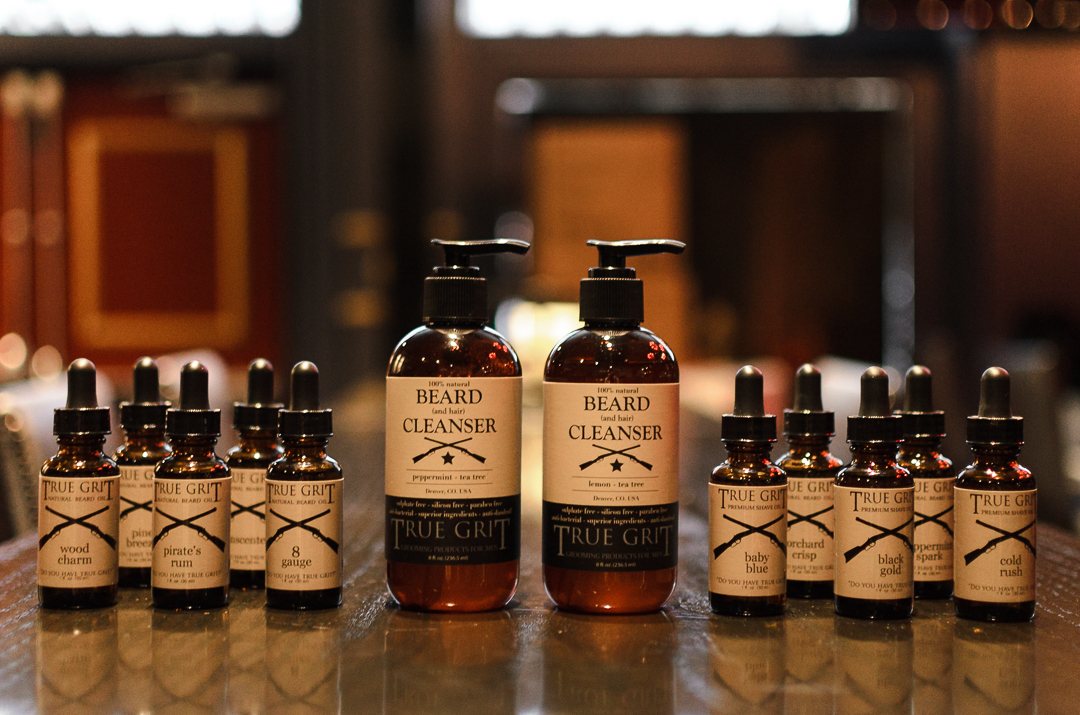 Currently, True Grits sponsor local Denver MMA Fighters Anthony Adams “Sugafoot” and Heath Soderstrom “Big Sexy.” and a next plan is to work on donating a portion of every bottle sold to a nonprofit. The future for True Grit is to become one of the premiere men’s grooming lines locally and nationally. Rockwell explained, “The Future is limitless for us because we love what we do.”

If you’d like to try True Grit for yourself, you can purchase items online, or check out a list of local dealers where products are available. 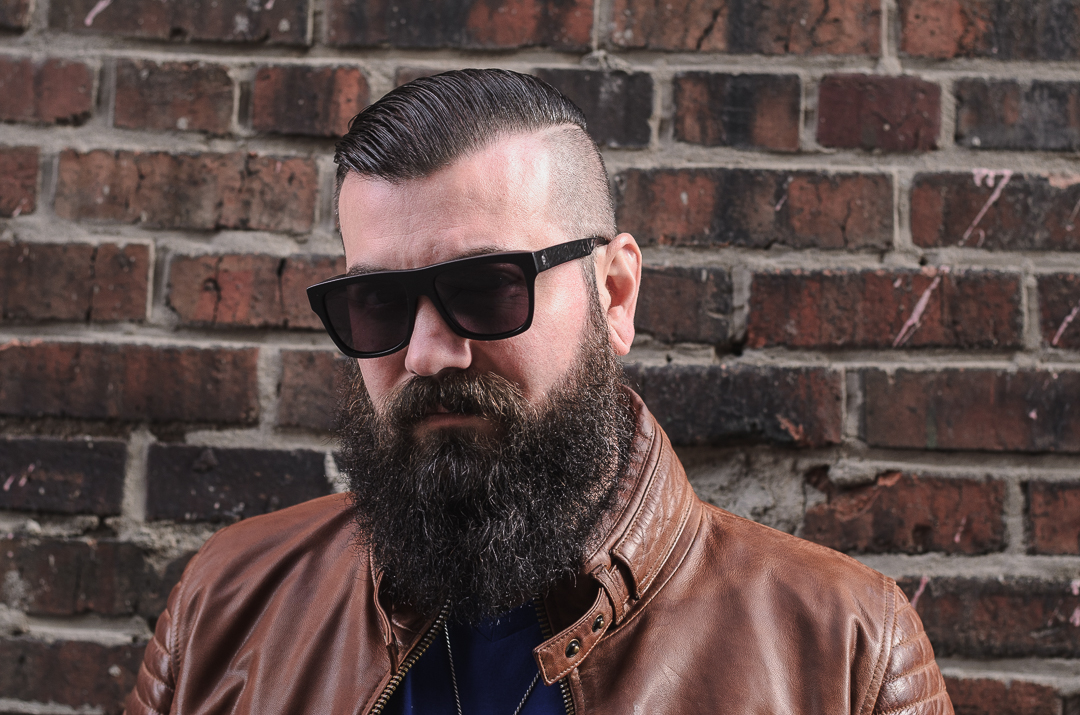