Denver’s got a hidden secret for Tuesdays and it comes in the form of a silent-disco yoga session. The first of the spring Glow Flow Silent Disco Yoga events will return on April 4 at the ViewHouse, followed by a May 2 session.

What is a silent-disco you may ask? It’s essentially a party in your head, as you put on portable headphones and have music stream live through them. This provides an atmosphere of both ambiance and engaging fun as you vibe out to the music, look around and see that others are also experiencing the same beats you are.

The GlowFlow event is held at the ViewHouse, which provides a luminescent view of downtown Denver as you get to practice yoga in their tented heated courtyard and garage bar. To incorporate yoga a CorePower Yoga instructor, Claire Ewing, leads the 60-minute class by speaking through a microphone that is heard through your headphones. She guides you through your silent yoga experience, as DJillE spins the tunes to provide an ambient but encouraging atmosphere while you go through the flow. This, together with the flow of yoga and aesthetics of glowing headphones, creates the Glow Flow Silent Disco. Plus, the event is free. 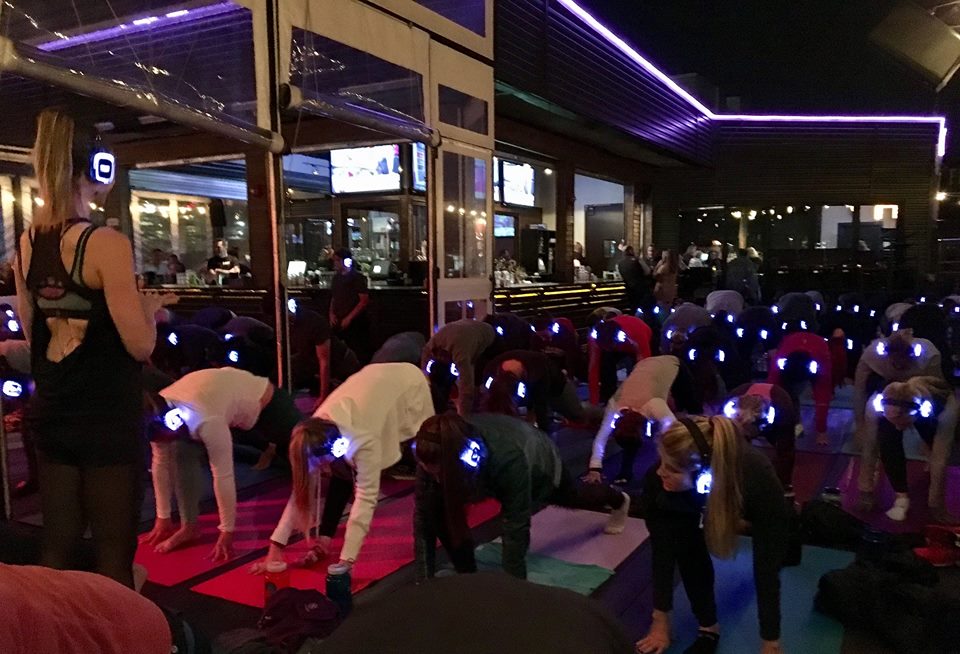 I had the chance to check out the March class, which utilized both the roof, as well as the bottom bar area of the ViewHouse. This was to accommodate the large crowd ready to find their yogi flow. The event got so packed, that people were showing up an hour and a half early to save their spot (and grab a drink beforehand.) Upon finding my spot, I looked around and noticed the large number of headphones glowing as the anticipation of the attendees radiated in the air. As we began the class, everyone put on their headphones and silenced their conversations. This allowed for the place to be full of people, energy and necessary silence. Usually, silence isn’t a part of a place that is full of energy and people, but with the usage of the headphones during a yoga session to create a silent disco, the only thing you could hear —if  you weren’t wearing the headphones— was the inhales and exhales as yogis went through their flow. It was quite an experience to combine my senses of hearing, seeing and touch. Also with a CorePower Yoga class, be prepared to get a restorative yoga session matched with a harder core workout. 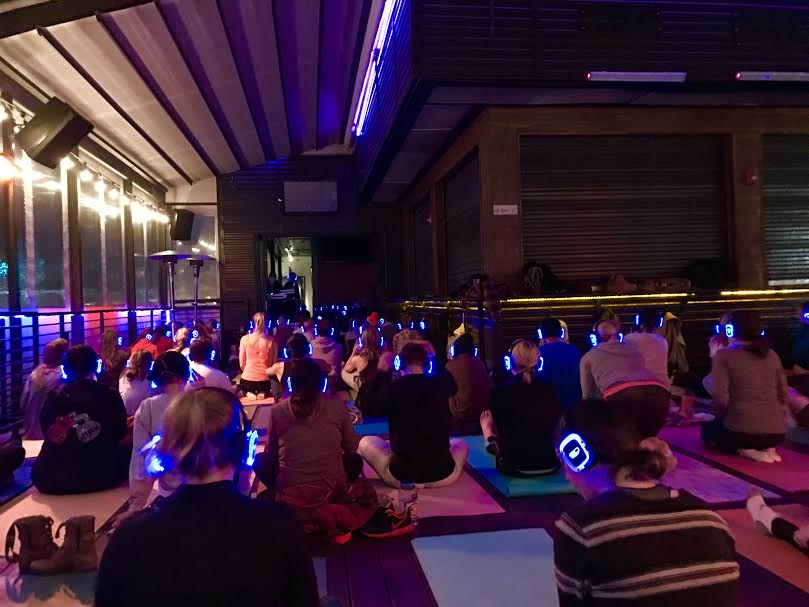 Immediately after the yoga event, yogis are invited to a $12 dinner special. It includes a delicious rice bowl from the ViewHouse, paired with either red or white wine from Infinite Monkey Theorem.
Don’t miss out on this Tuesday event and be sure to get there early. Headphones will run out as they have in the past.