Springtime is a great time to go fishing, biking, hiking and camping in Colorado. Just remember to stay alert of our relatively new neighbors— the moose.

Riddle: What is as dangerous as a mama bear and has a big nose? A mama moose.

Late spring and early summer is an especially delicate time for moose. This is the time of year when female moose are most likely to have young calves by their sides. If you find yourself between a mother moose and her calf, you are in danger of being charged.

Moose are dangerous any time of the year, but especially during calving season, mating season in the fall and when they are tired and grumpy from lack of food during the winter. 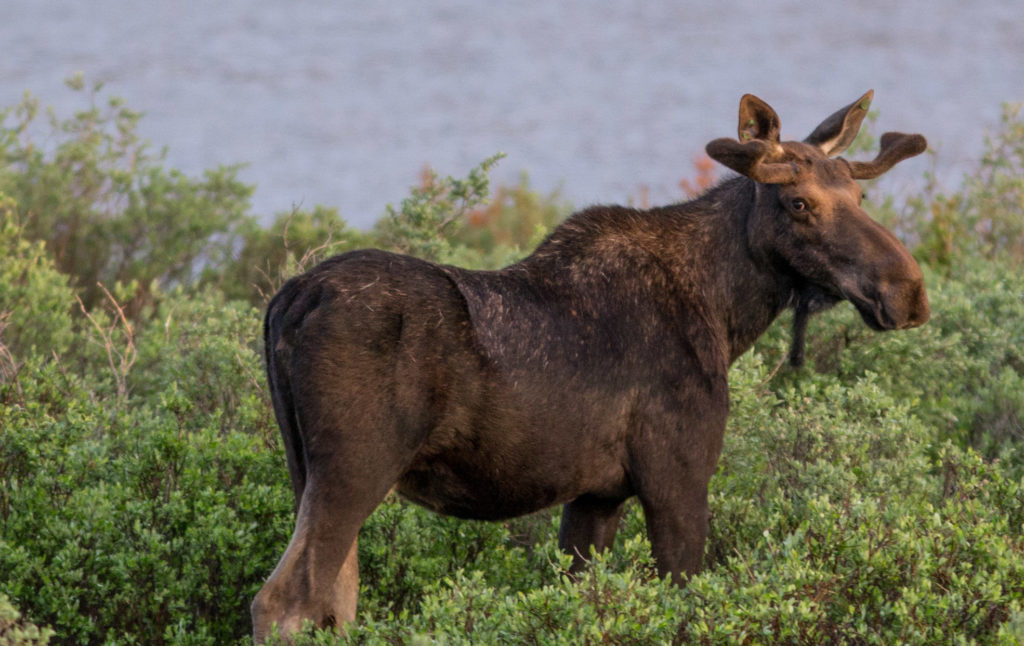 Right now, we find ourselves in a particularly intense time of the year. Some female moose may have already calved, while others might still find it difficult to find food.

Survival tips if you are attacked:

Moose see dogs as a threat to their young. Many places with high moose populations—like the Scenic Trail at Maroon Bells— do not allow dogs or require them to be leashed. 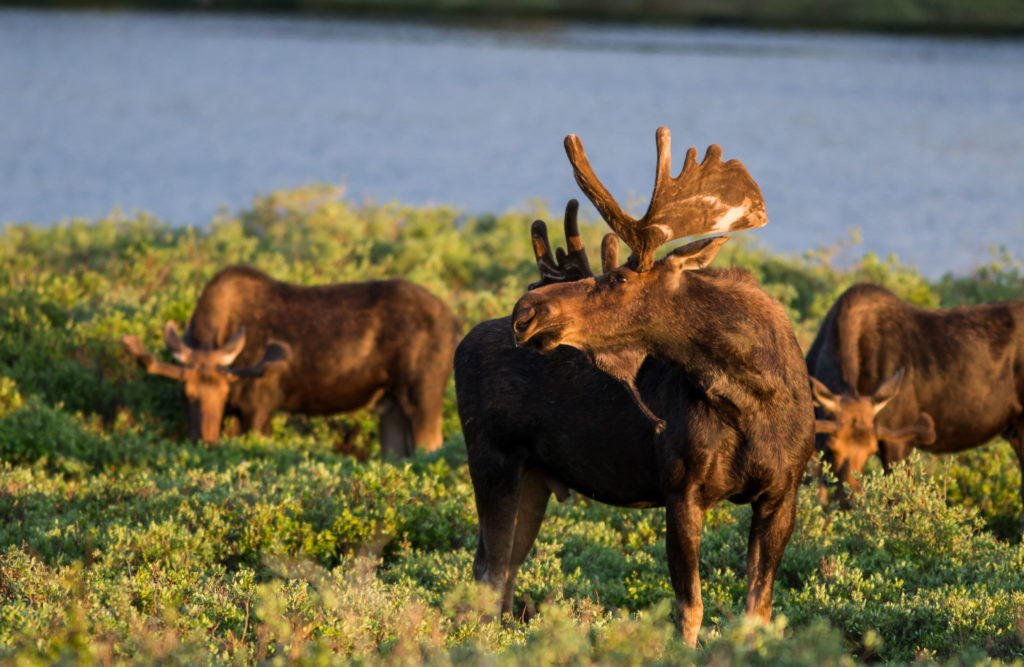 As of 1978, sightings of moose have not been rare in the Colorado high country. Remember to show the moose respect and watch them from a distance.

Human transplants are not the only species that have moved into Colorado the past few decades. Hikers, campers and skiers alike are running into a 1,500-pound problem a lot more often these days— moose. With aggressive attitudes and ravenous stomachs, Colorado is hitting its ‘moose capacity.’ 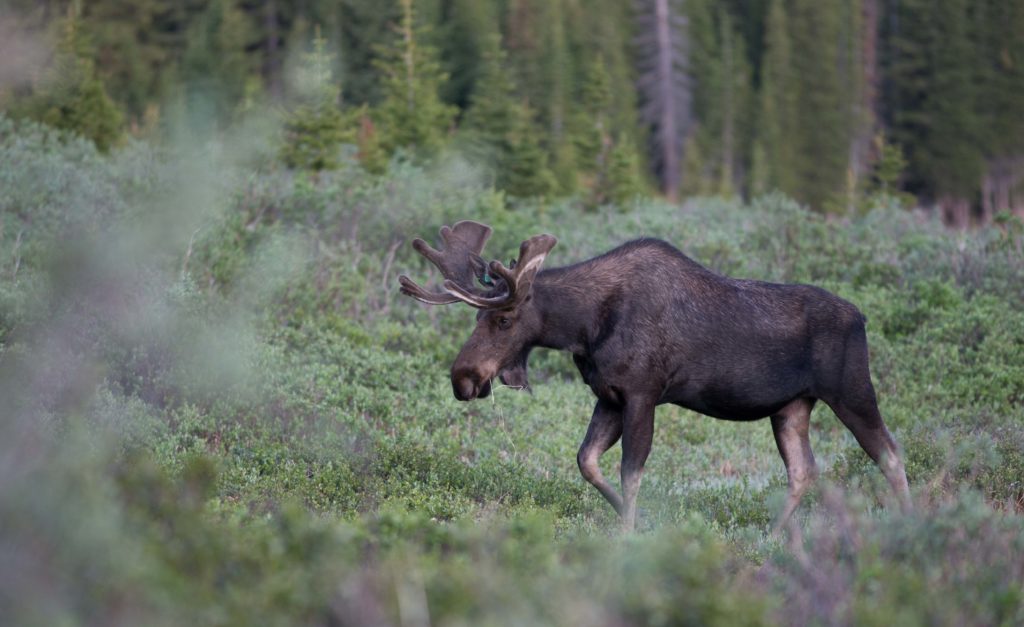 More than 2,300 moose now call Colorado home, but this wasn’t always the case. Before the 1970s, moose sightings in the Colorado mountains were about as common as a tap-dancing penguin — they just didn’t happen. A stray bull might have wandered down from Wyoming in search of new territory, but they weren’t plentiful enough to maintain any type of population.

Colorado Parks and Wildlife decided to give the moose a boost.

1978: 12 moose are transplanted from Utah to Colorado’s North Park Region near Walden

1991-1992: 100 moose are transplanted from Wyoming, Utah and North Park are released near Creede

These populations have multiplied dramatically. It’s now common to see moose standing in a river, munching on willow — their main diet — in Colorado. It’s so common in fact that Colorado Parks and Wildlife now offer hunting licenses and moose tags to sportsmen looking to help keep these populations in check. Something that would never have happened 20 years ago.

Moose can be hunted legally with correct tags in North Park (M1), Laramie River (M2), Southwest Colorado (M4) and Grand Mesa/Crystal River Valley (M5). Here are where moose can be found in Colorado: 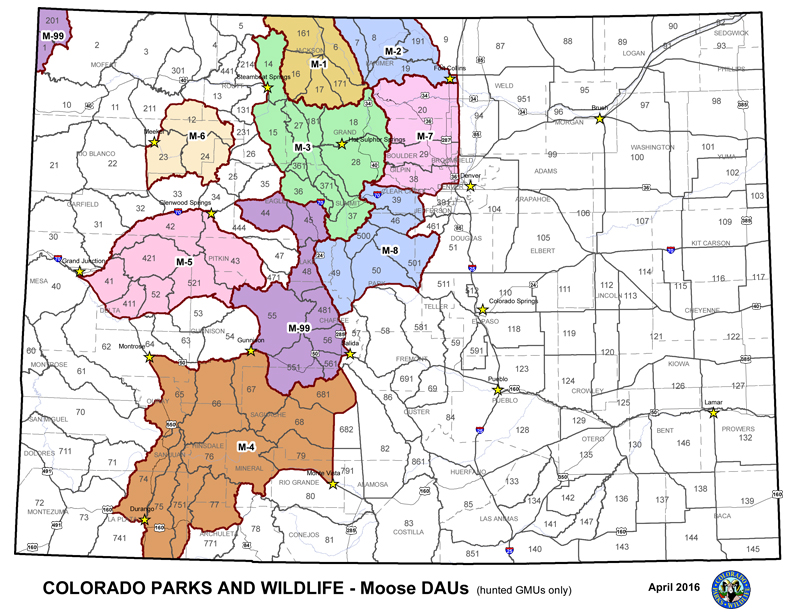 Moose, like the one that chased a Breckenridge snowboarder in March, look to ski slopes for more shallow snow. A moose’s body— with its seemingly disproportionate long legs — is built to wade through deep snow and water. But that doesn’t mean it won’t look for the packed-down snow of slopes for reprieve.

Moose of both sexes tend to be elusive animals that can be easily missed by passersby. If you do come face-to-face with a moose, remember not to antagonize it— they will charge. Their attacks have been compared to being hit by a car. So slow down, back up, leash your dogs and leave the moose alone.