Review – RJD2 Reminded Us What DJ’ing is All About

RJD2 is the living manifestation of “can’t stop won’t stop.” The hip-hop producer has been creating music since 1998 whether under his own moniker, for other artists on the same label and has also been a part of several artist collaborations. Alias’ aside, Ramble John Krohn, has released seven albums as RJD2 including Dame Fortune just last year. On January 28, 2016 RJD2 played a Saturday night set at Denver’s Ogden Theater – yet he’s not even on tour, making us one damn lucky city. During the evening he made it clear that he doesn’t plan to go anywhere anytime soon. 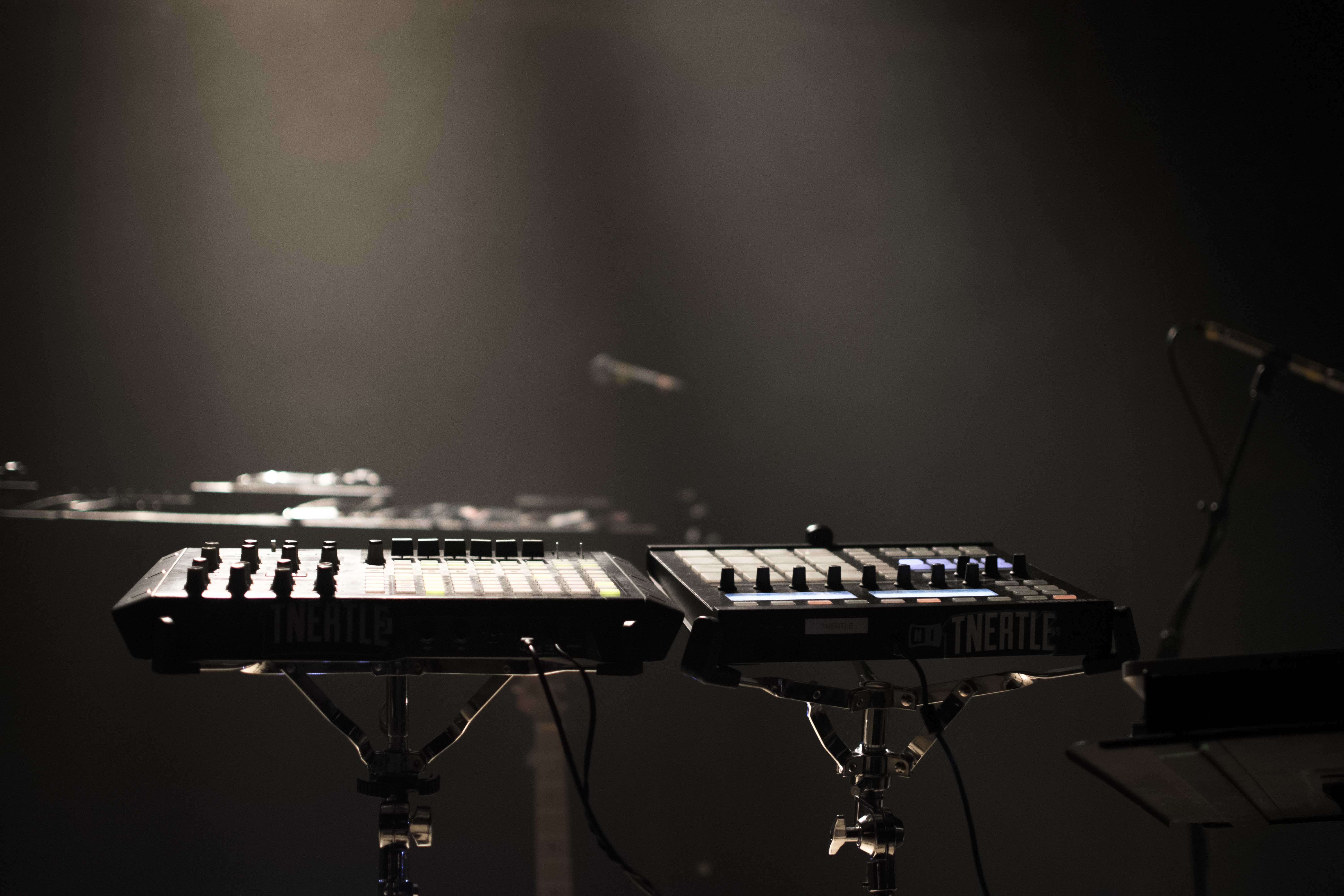 But first, it would be an incredible shame to not talk about Tnertle. The electro-funk Denver-based jam group opened for RJD2 this weekend and proved that showing up early for the direct-support can really be worth it. Recently, the group added a horn section as well as the usual featured artist to their live performances making this a pristine time to catch them live. This time, Raymond Salazar paid a visit for a few songs, complementing the hip-hop element to Tnertle’s jams. With eight people on the stage, live horns, electrifying guitar melodies (and colors – they were neon), and an excited crowd paired with irresistibly danceable music, it was quite the dance party. Not to mention, the band really kept us on our toes, always switching up instruments, instrumentation and guest artists. The keyboardist/producer played a touch board which faced the crowd so everyone could see his movements. To put the cherry on top, they closed things out with a jam-session rendition of Bag Raiders’ (rendition of) “Snake Charmer.” 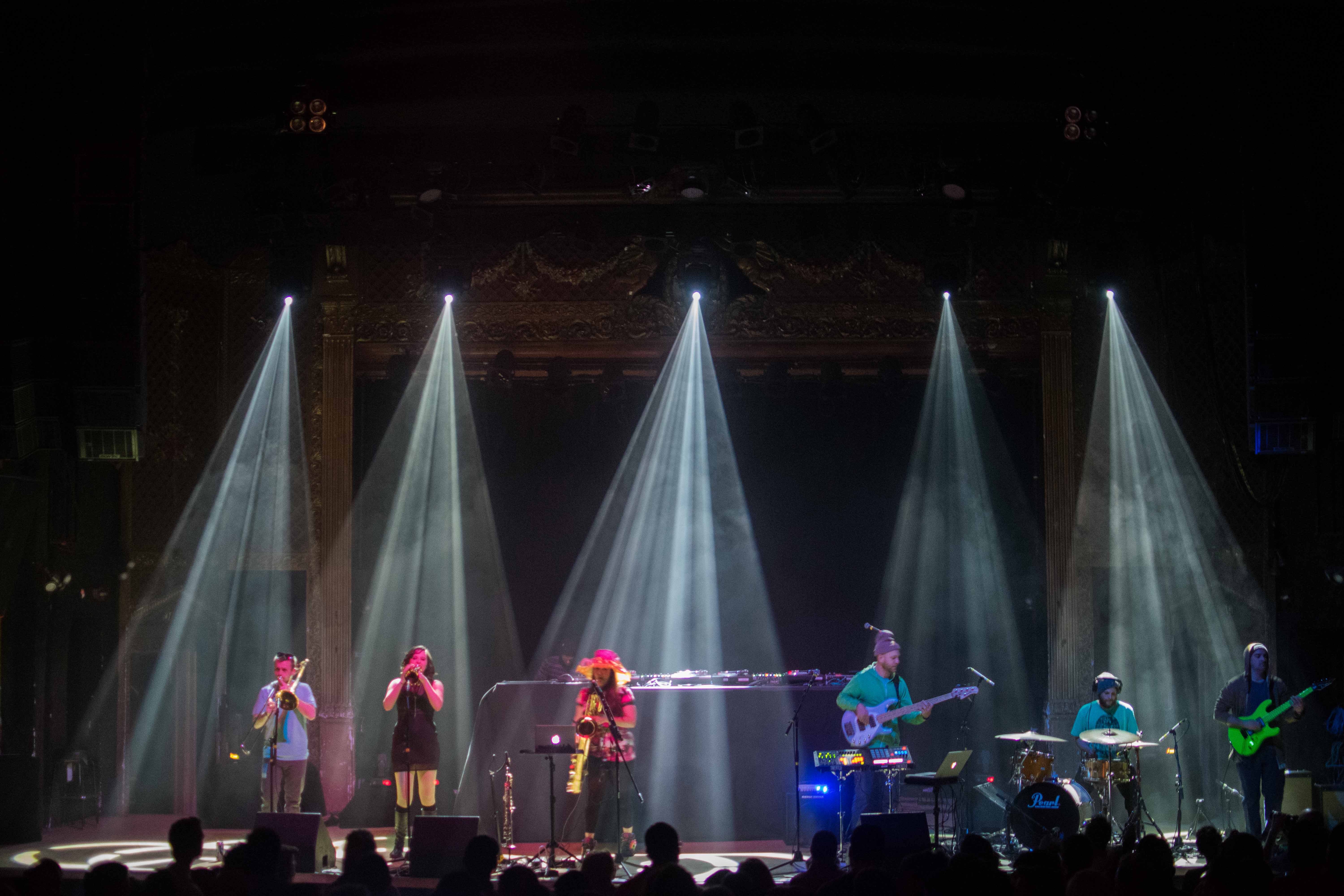 Run the Jewels graced the airwaves during the short intermission between sets. Suddenly the lights went out, and a costumed figure walks onstage to introduce RJD2. The costume was black so it hid in the shadows of the stage, but at times during the introduction it flashed lined rows of colored lights. The figure spoke and moved robotically before finally giving way to RJD2. The figure tore off the costume revealing that they were actually Krohn himself. Now sporting a Star Wars T-shirt, RJD2 approached the approximately seven-foot-wide table that was from side to side lined with DJ equipment.

During the set RJD2 combined hip-hop beats and vocal samples with soul and atmospheric funk. He warmed up at first, gradually easing into a heavier and more diverse utilization of lighting along with funkier beats. Not to mention he was following up an an incredibly fun opening performance by the local Tnertle leaving him with an uncommon headliners disadvantage. Once Krohn approached the DJ table, now sporting a simple Star Wars T-shirt, it became clear this would be a memorable night. RJD2 used both vinyl and touch boards to recreate his own tunes as well as alternative versions of them and some other mixed creations. His movements were swift and sometimes repetitively robotic with the way he would hastily switch out the records. There’s no doubt that Krohn worked hard over the turntables, pacing back and forth, while constantly spinning in 180’s to swap out vinyl placed behind him. 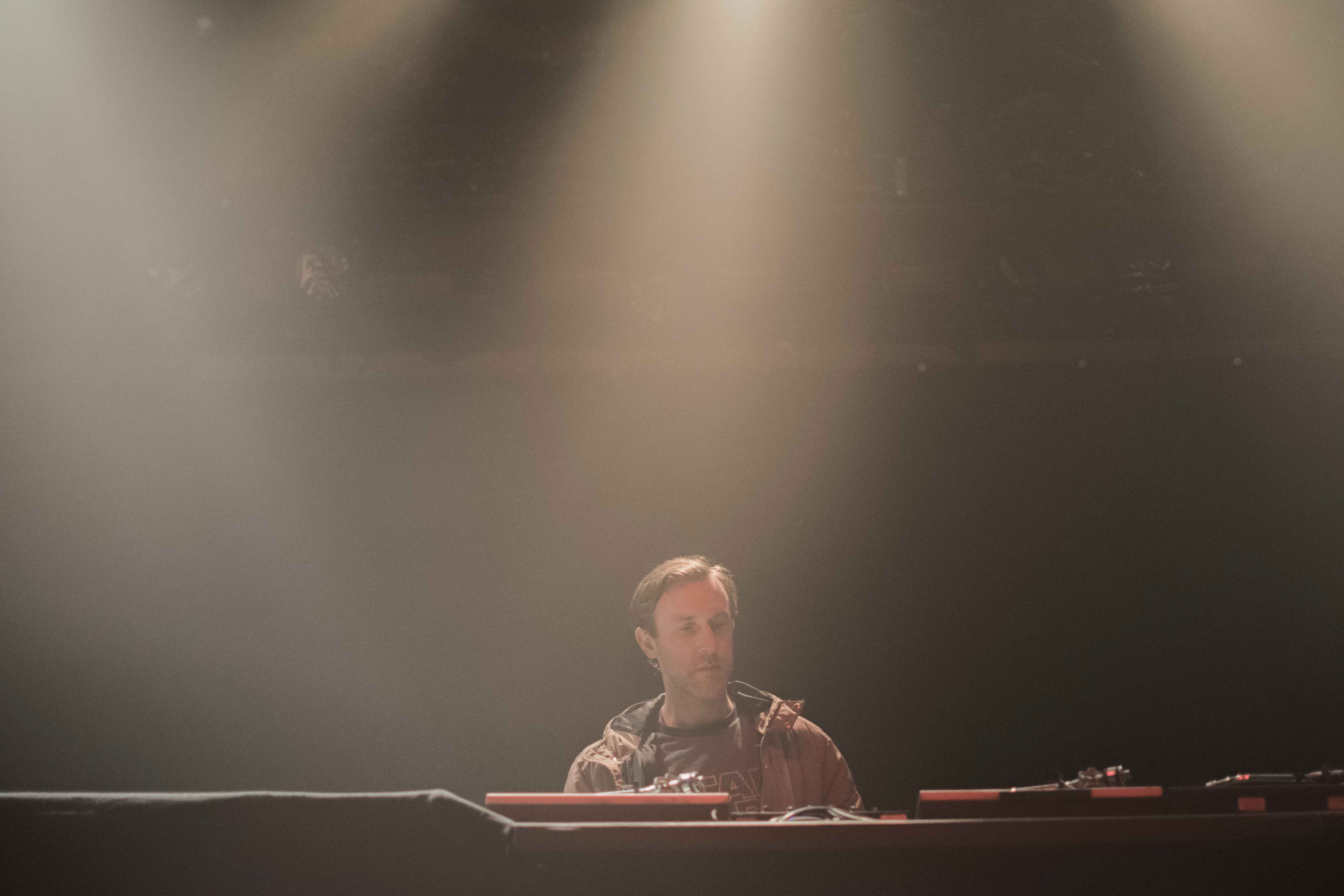 “Thanks for rocking with me through  all of these years. I want to say. It’s amazing to me that I’m so lucky to be involved in music and make a connection with each and every one of you. If it wasn’t for music, we would never be face to face. We would have never made a connection and that means a lot to me. I’m honored and humbled to be a part of that. On that note, we got one more tune. ” – Krohn

The theme song for AMC’s hit show Mad Men, “A Beautiful Mine” (yes, that’s RJD2) was Krohn’s final song – at least, that’s what he told us. Afterwards, the audience cheered and chanted “RJD2.” Moments later Krohn expectedly returned to the stage to play “Ghostwriter.” The crowd lost it – dancing furiously to the beat. When everyone is truly getting down on a packed dance floor it really instills a sense of community, and that’s exactly what “Ghostwriter” did. Everyone bumped into one another, laughed, smiled and sang along… to the trumpets. I admittedly crave a slow-motion pro-video recap of this moment. 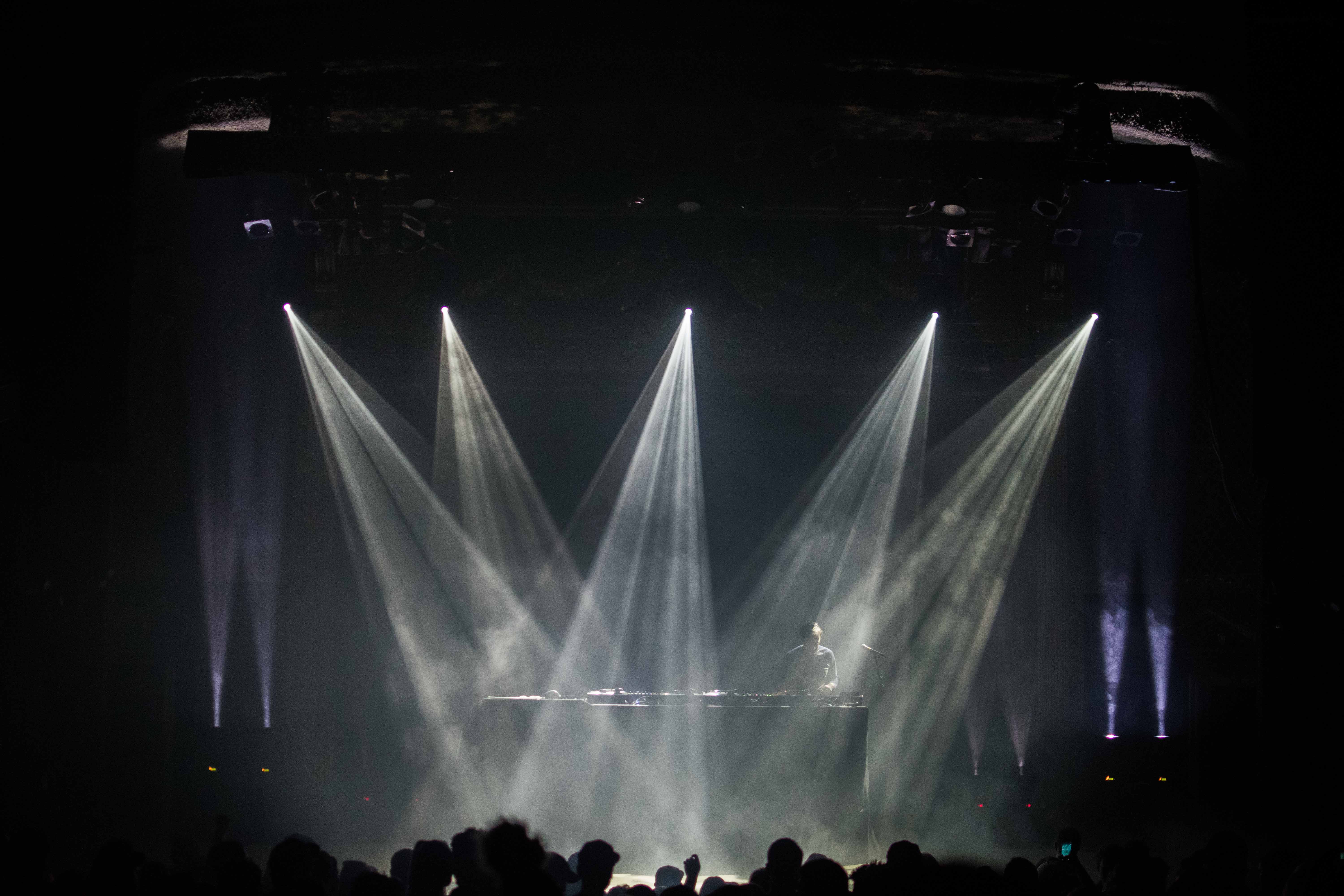 Midnight had just hit and the smoking section had already been closed, but the evening wasn’t over just yet. After grooving to “Ghostwriter” in an unforgettable encore, the crowd still couldn’t let RJD2 go – and apparently the feeling was mutual. Krohn returned with “Good Times Roll Pt. 2,” another popular track from the classic 2002 RJD2 album Deadringer and the dancing continued for just a little while longer.

The encores only verified RJD2’s “can’t stop, won’t stop” ethos. Krohn has been making music for almost two decades now, and after last night it’s safe to say he loves doing it. His passion shone brighter than the lighting and the occasional grin could be caught on his face. Krohn, filled with appreciation, thanked the crowd again and again and even shook hands with front-row fans at the shows conclusion. Through his passion and talent for the craft of disc jockeying, as well as showing love for the people who love him, he produced a show that committed fans and non-fans alike.

All photography by Sina Ghozati. Check out our full gallery of the show here. 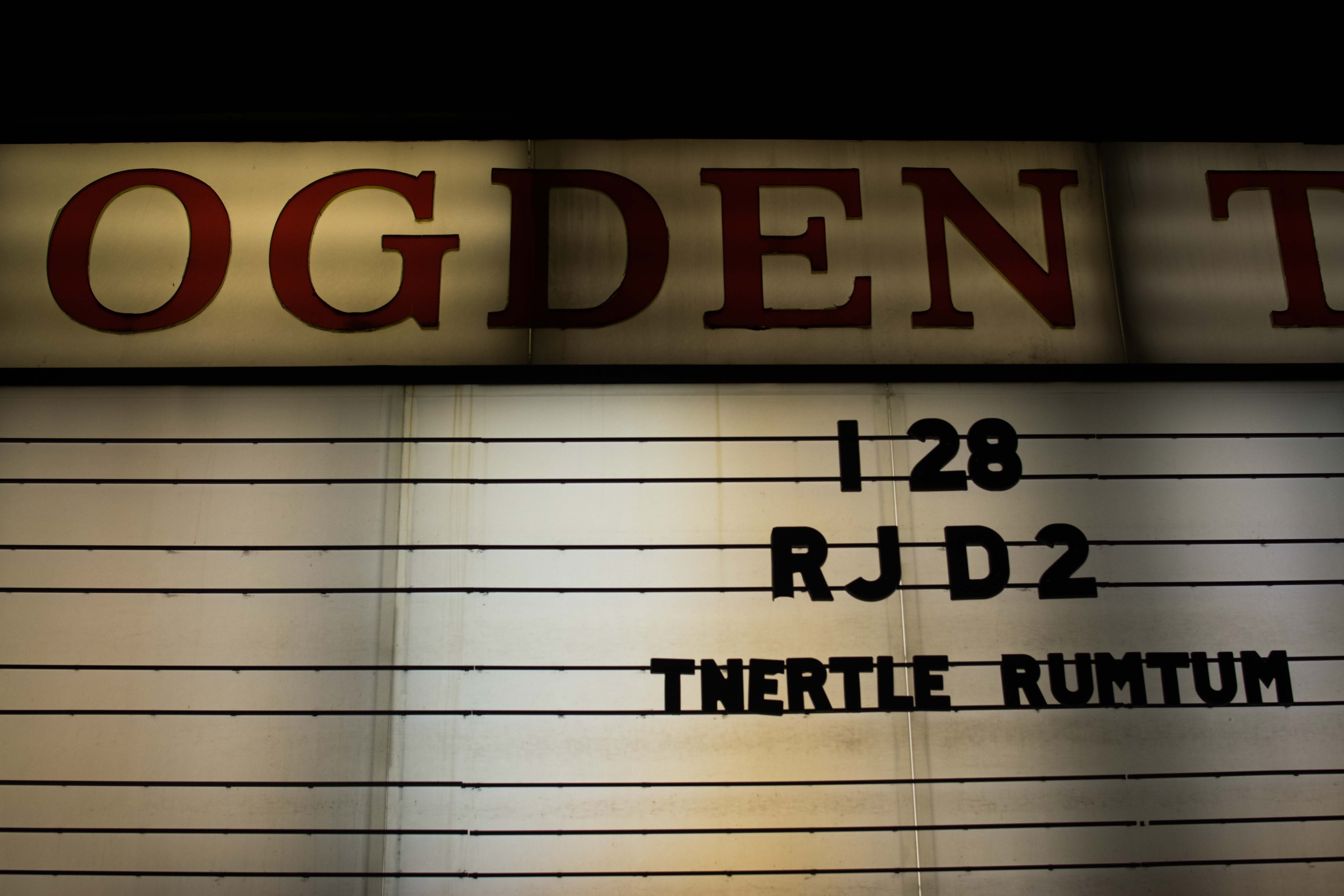