For the third year in a row, 50 First Jokes graced Denver with a show on Saturday  at The Bug Theater that brought together the comedic community that seems to only be growing in the city. The event was hosted by the easy-going Timmi Lasley and outspoken Mara Wiles, who came out trying to rap “let’s talk about jokes, baby” to Salt-N-Pepa’s “Let’s Talk About Sex.”  50 First Jokes presented 50 comedians who performed the first joke they wrote in the new year, with some of the best-loved Denver comedians — like Hippieman — some relative newcomers and a dedication to a couple of comedians who are no longer here. Packed inside The Bug Theater — which was literally to capacity — the crowd exemplified Denver in a way that is no longer seen downtown or in hipster bars and restaurants. Yes, there were a lot of down coats and raggy flannels, but also there was someone in at least every age decade from 20 to 70 years old. Perhaps that’s why it seemed like at least someone in the crowd laughed at every joke, but also it was a treat to witness comedians try out bits that weren’t rehearsed and sometimes fail at doing so. The atmosphere was a forgiving and friendly one and by the end the crowd and comedians were all part of something that would never be replicated.

Though it was an experience that you really had to be there to appreciate, 303 jotted down some of the jokes that garnered the most appreciation from the crowd. Bare with us here; stand-up comedy is not the easiest to write down on its own. 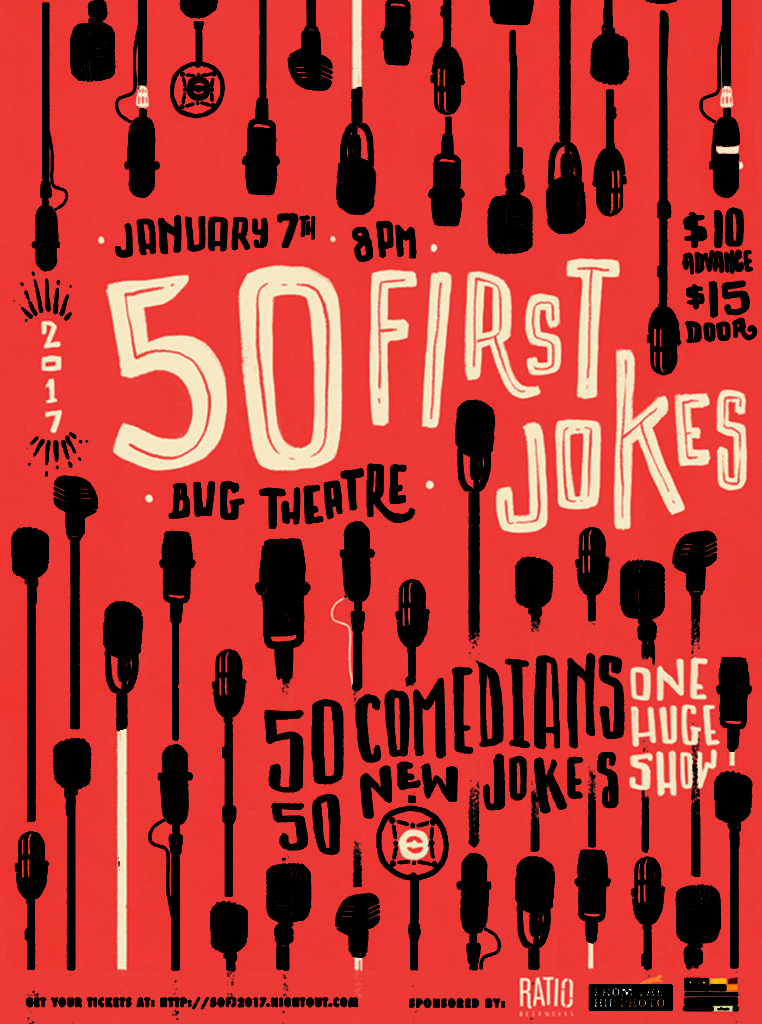 Geoff Tice: My holidays were going great until my very religious sister-in-law was leaving the house and she said, “I hope everyone has a good night, God Bless.” What I wanted to say back was, “you have a good night too. All the best.” But what came out was, “you have a good night too. All the beast.” Like I was Satan trying to save the night with a sweet new catch phrase, All the Beast. And she was pissed. She whipped around and looked at me and said, “what the heck? Did you just say, ‘all the beast?'” And I looked straight back into her soulless, dead eyes and I said, “frick yeah… ya dumb bitch!” At that very moment lightning struck, the earth parted, Satan himself came out of the ground and latched onto my sister-in-law, gave me a pretty cool high five, and then wrenched her down to whence she came. All I’m saying is I’m probably not going to drink as much next year.

Kira MagCalen: I don’t want to say I’m an anarchist or anything, but I don’t like well-behaved dogs. OK, so I’m not sure people are basically good, but I’m pretty sure dogs are basically good. But I met this golden retriever that was way too well trained. It knew all of its commands; like you told it to lie down, and it did. You told it to accept Jesus Christ into its heart, and it did. And it’s really unsettling to have a dog that’s that nice. Like, who’s a good boy, Ruffles? Is it you? Do you know?… But the thing is, I live vicariously through dogs because they’re allowed to sin. Because whenever you do something bad, that’s how you have a personality… All a personality is is doing the things you aren’t supposed to do and then knowing how to get away with it. We all want to do the things that dogs do… I’m just sayin’, if your dog has never committed a sin, I don’t want to pet it.

Jacob Rupp: I was at a 7-11 the other night and I was buying a Red Bull, and the cashier looked at it and said, “oh, you doing some gaming tonight?” And I was like, “pffft, this is a Red Bull, not a Rockstar… I’m not a Monster.” And then I said, “no, I’m driving down to Colorado Springs tonight; it’s a long drive.” And he said, “Colorado Springs, they have the best flour down there.” And I was like, Jesus Christ, you could not have said two worse things. But that guy just made me realize how excited I am for all the robots to take over the jobs. You’ll never go up to a self check-out machine and scan a Red Bull and the machine goes, “oh, what are you doing tonight? You watching reruns of a 90’s sitcom about planes?” And I’d be like, “no… why?”…”because Red Bull gives you wiiiiings.”

Miriam Moreno: I’m so nervous! This is usually how I feel when I’m in a room full of white people… Usually to break the ice, you know I’m Mexican; I’m really scared of white people, so I just ask, “do you guys like the Goo Goo Dolls?” And I just f***ing black out because I’m terrified someone will say “yes” and I won’t have anything else to say.

Byron Graham: Laffy Taffy takes the submissions of jokes from children all over the world. And if comedy needs anything in 2017 it’s outsourced childhood. So let’s go for it! This one’s from Gloria F., Why does an elephant never forget?…. Because he lost his wife on 9/11. This next one comes from Henry, Virginia. What did Abraham Lincoln say to the usher?… Help me; I’ve been shot! Dark joke, Jeremy Sliptickle. Alright, the joke on this one is from Anonymous and says, Willy Wonka Candy Corp doesn’t like your mockery Mr. Graham… (and then he choked and stumbled off stage…)

Preston Tompkins: I work at the Denver Zoo. Specifically, I drive the train (applause). Shut up. Now at the zoo, we serve beer. You are not allowed to bring the beer on the train. So this drunk lady tried to bring a beer on the train. When she stumbled up to me I said, “I’m sorry ma’am, but you can’t take that beer on this train.” And she said, “F*** you, carny!” And I said, “I’m sorry ma’am, but I’m not a carny.” And she said, “Really? Let me ask you something, do you operate a ride made for children?” And I said “yeah.” She said,  “are there exotic animals at your work?” She said, “can I buy a funnel cake within a hundred feet?” And I’m like, “holy shit, I’m a carny!” So I let her on the train with the beer. Cause if I’m going to be a carny, I’m going to be a goddamn good one.

Nora Lynch: I just realized, after the death of my good friend, who was 37… That I am now at an age where I am too old to die young. Yeah, it sucks. Like, if I died tomorrow, no one would say, “oh, that’s so saaaad.” No, everyone would be like, “welllll, you know….”

Rachel Weeks: I’m just so tired of men coming up here and saying, “well, I bought her dinner or a movie ticket, so she needs to put out for me.” We don’t need to do anything for you. Human men have it the easiest. You don’t have to do some choreographed dance on water to get our affection or anything. All you need to do is buy me a movie ticket and I’ll get the popcorn. It’s really simple. And if you aren’t going to buy my movie ticket for me, you at least have to make a love nest out of your spit and twigs for me. That’s all I ask.

Mitch Jones: So I was hanging out with my family and my aunt tells me my cousin just got out of priest bootcamp because she couldn’t think of the word seminary…. (lots of laughter from the crowd)… Yeah, I laughed my ass off too because I was thinking about priest bootcamp. Like, guys outside in the mud doing push-ups but yelling verses and… like, the one that can’t remember all of them gets beat in the night by the other priests with little miniature bibles in socks. Yeah, so I laughed my ass off and my family thought I was laughing at my cousin for becoming a priest and they asked me, “well, what are you doing with your life?” And for some reason the first thing that came to mind that I said was, “well, I’m going to four weddings this year.”

Zac Maas: Does everybody out there know “a hugger?” Yeah, I definitely saw some of those out there. Someone who just decides it’s okay to come and press their entire torso against a stranger’s entire torso. It’s mostly women, if we’re honest. But whenever “a hugger” comes up to me and tries to tell me it’s okay because “they’re just a hugger”…. I always say, “well, I’m not.” But what pisses me off more than that, is when the hugger hugs me, and then someone else in my group and after hugging that person goes, “oh, wow, you’re such a great hugger!” Because then, I’m like, “well, what does that make me? A shitty hugger? I didn’t realize this was a hugging competition.”

All photos by Cori Anderson