27 Protesters Explain Why They Marched on Denver

Last Saturday, on January 21 from 9 a.m. to 3 p.m. approximately 200,000 women, men and children gathered at Denver’s Civic Center Park for the Women’s March on Denver. The march was a part of a national protest that spanned 500 cities with more than three million attendees – making it the largest demonstration in US history. In Denver, the crowds came out in droves to support a range of issues including women’s reproductive rights, equality and to advocate and defend marginalized groups. The march, which began only as a Facebook group, was organized by three local women who aimed to make the march a model for the country of peaceful protest. The event achieved this goal without incident.

But for many that did not attend, a question has lingered :”why did so many people march?” We spoke with 27 attendees to get their thoughts on why they participated. Read on to get a clearer picture of the motives behind the movement and feel free to leave your comments about the event below.

“As a previous victim of sexual assault, I feel like it really sucks that our president is an admitted sexual assault-ist.” – Ioe Paxton 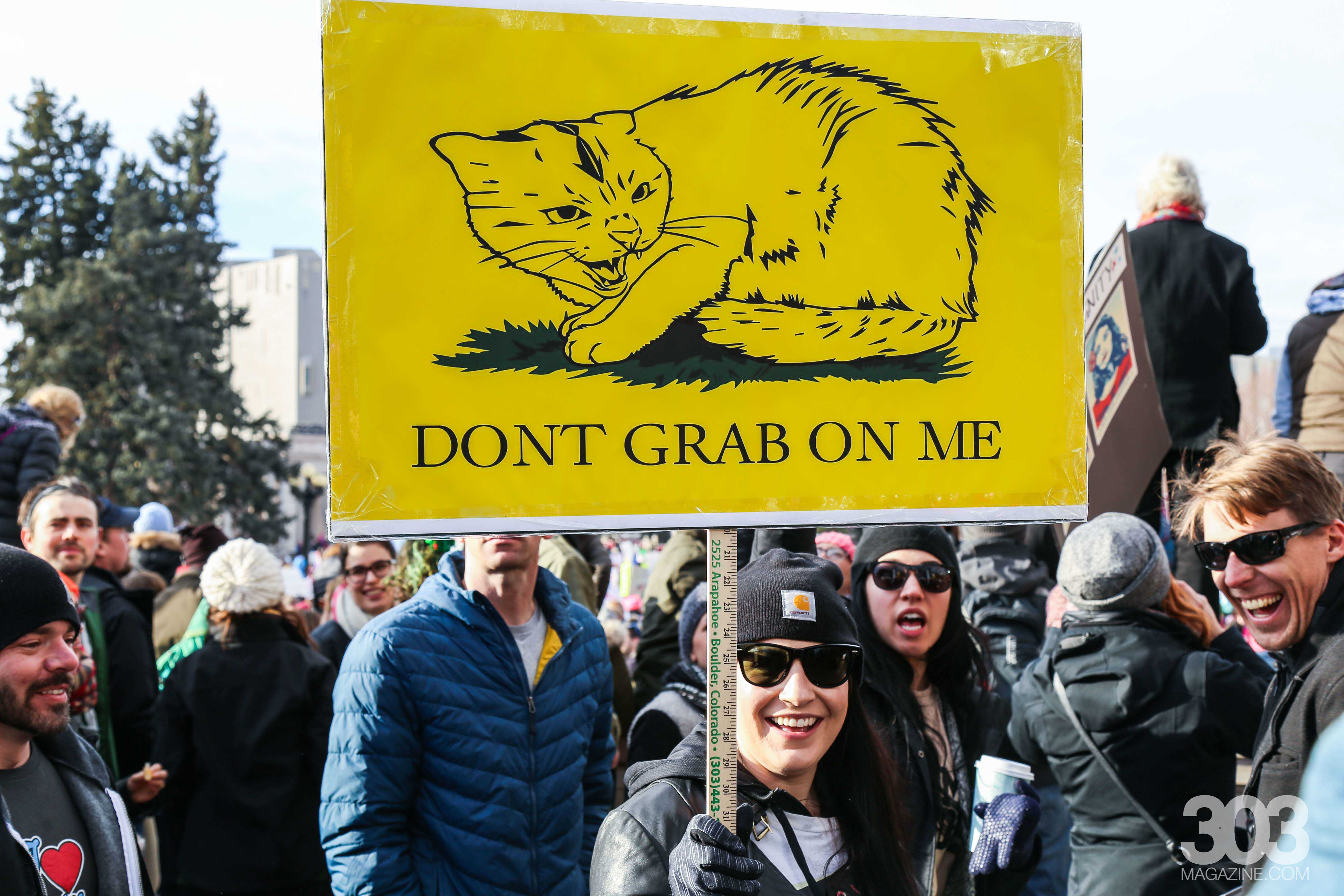 “[We’re] representing women’s rights and standing up and stepping up.” – Erica White 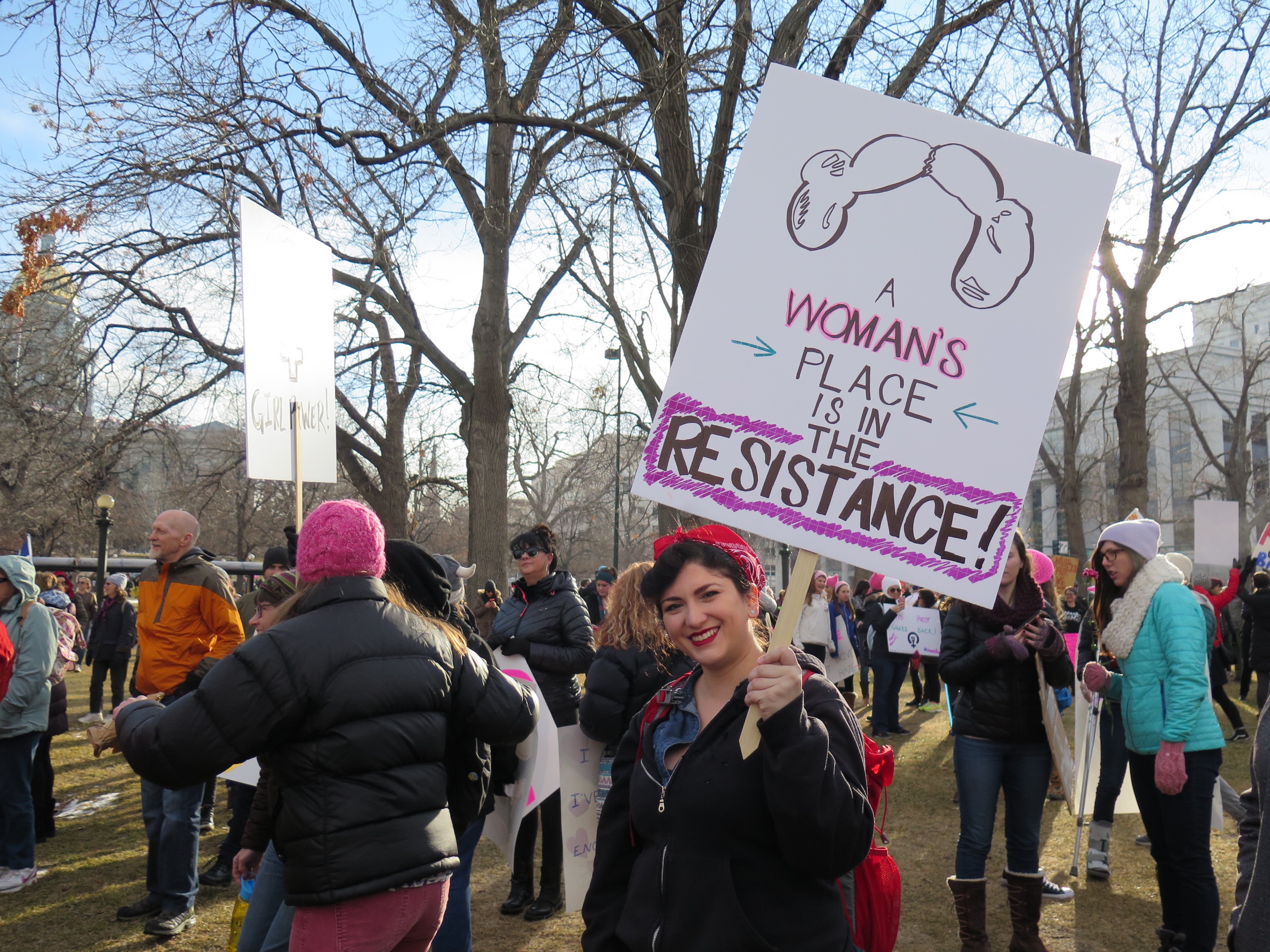 “Because I hate Trump. And for human rights for everyone! I’ve never done anything like this in Denver, or ever before, even though I’m a Denver native! I just don’t know how Trump got elected.” – Lisa Stokes

“We don’t support Trump and or anything he stands for and we are here to stand in solidarity and let everyone who is going to be affected by his presidency know they have allies.” – Lindsey Watson

“I am here because it’s important that our voices stand strong. And I’m here for my 14-year-old daughter because it’s her world that we are creating.” – Alison Dinn

“Hopefully these marches will send a message to the new administration that a lot of people are going to be scrutinizing their policies over the next four years with regard to human rights.” – Ethan

“I’m marching for my two granddaughters— four and a half and six. I want them to have a good future and the only way to do it is to start now, get everybody together and empower the people.” – Lindy Cook 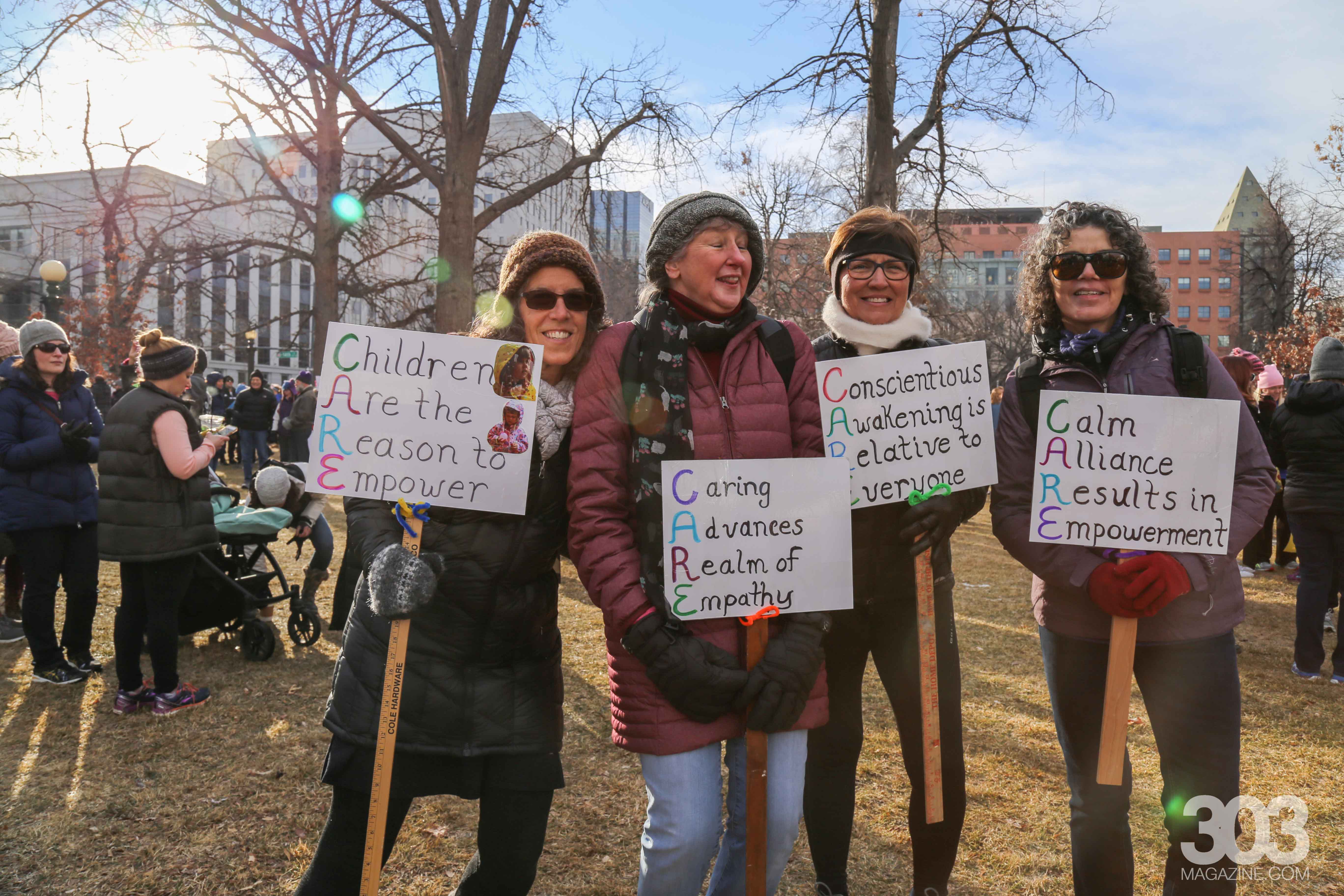 “You can’t take my rights away! I marched in D.C during the Bush ‘regime’ and so I’m out here again, fighting.” – Erica Noel

“I have too many female family members to not be here. Dump Trump!” – Joseph Coram

“I think it’s important to show that we have strength. We aren’t going to just sit by while they dismantle healthcare and defund Planned Parenthood and other things that are just basic human rights. We have the right to get cancer screenings— it’s ridiculous that we have to fight for it. This is just preparation to get all rallied up because it’s going to be a long four years. It’s good to look around, see everybody else and know that you’re not alone.” – Megan Ringenbach

“I’m here to support my wife and to support all of the other women in Denver and in the world, I suppose. The election of Trump was a really alarming event and I think we all have to be prepared to be in the resistance for the next four years.” –  Douglass Parker 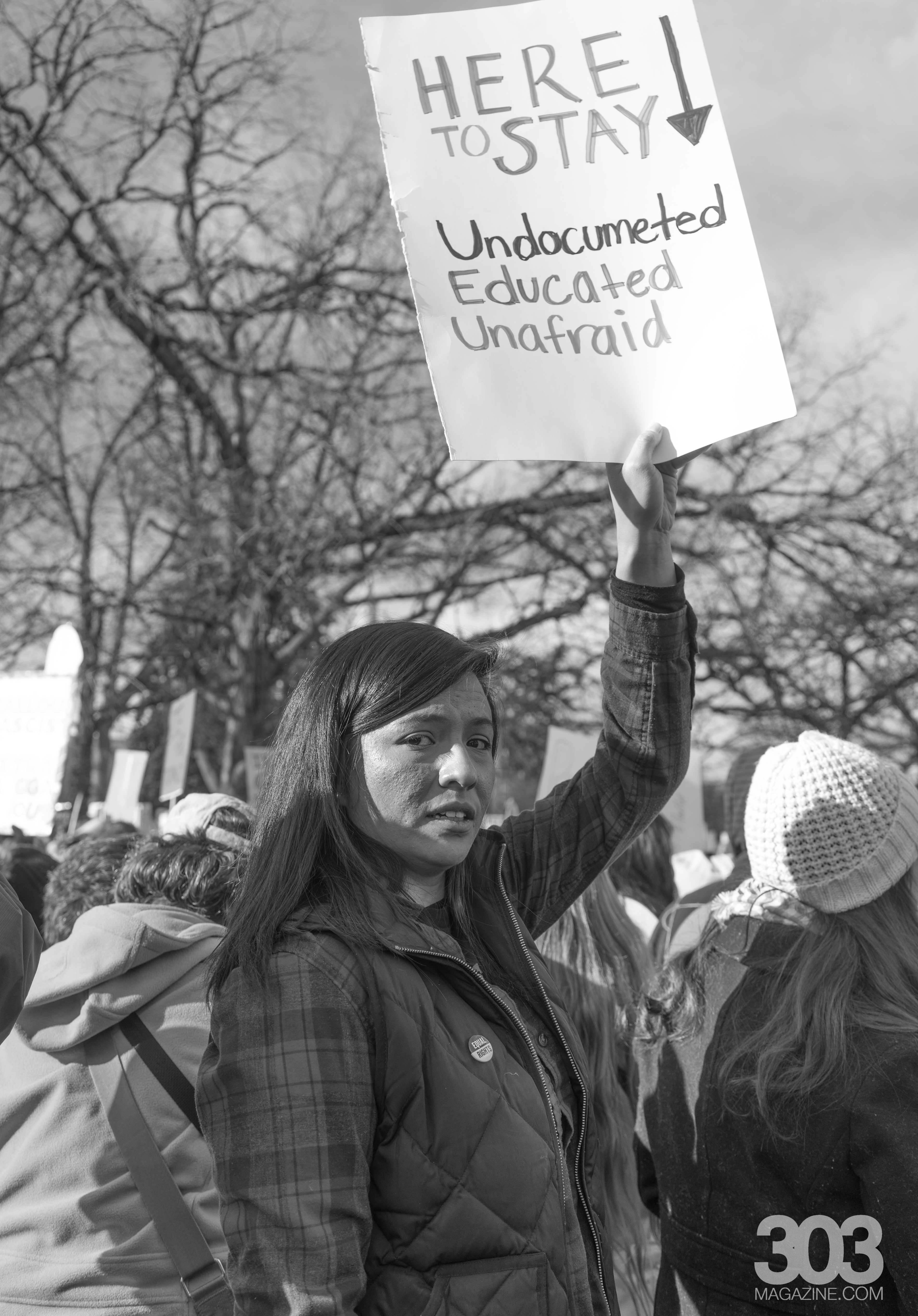 “I march because I am a recipient of  DACA, Deferred Action for Childhood Arrivals and without DACA I would not be able to serve the community as an educator here in Denver and serve the community which I love. And to be able to live out my dreams like every other American. I too feel like I am a part of this country and I am fighting for my right to be here.” – Marissa

“I’m here because a woman’s place is in the revolution.” –  Grace Wagner

“I’m a woman with a disability and I feel like this president threatens the equality that all of the people here are working so hard to achieve. I’m here for our progress, for our future, to live in a world where girls don’t have to grow up being afraid of sexual assault— I’m going to cry— and to see all these people here supporting people of color, different sexual orientations and disabilities makes me proud to be an American.” – Elizabeth Komos

“I think our voice can be heard. I think silence does nothing for anyone, and so [marching] allows us to stand up and speak our truth and to be heard in a different way, in a positive way.” – Dameda Finney 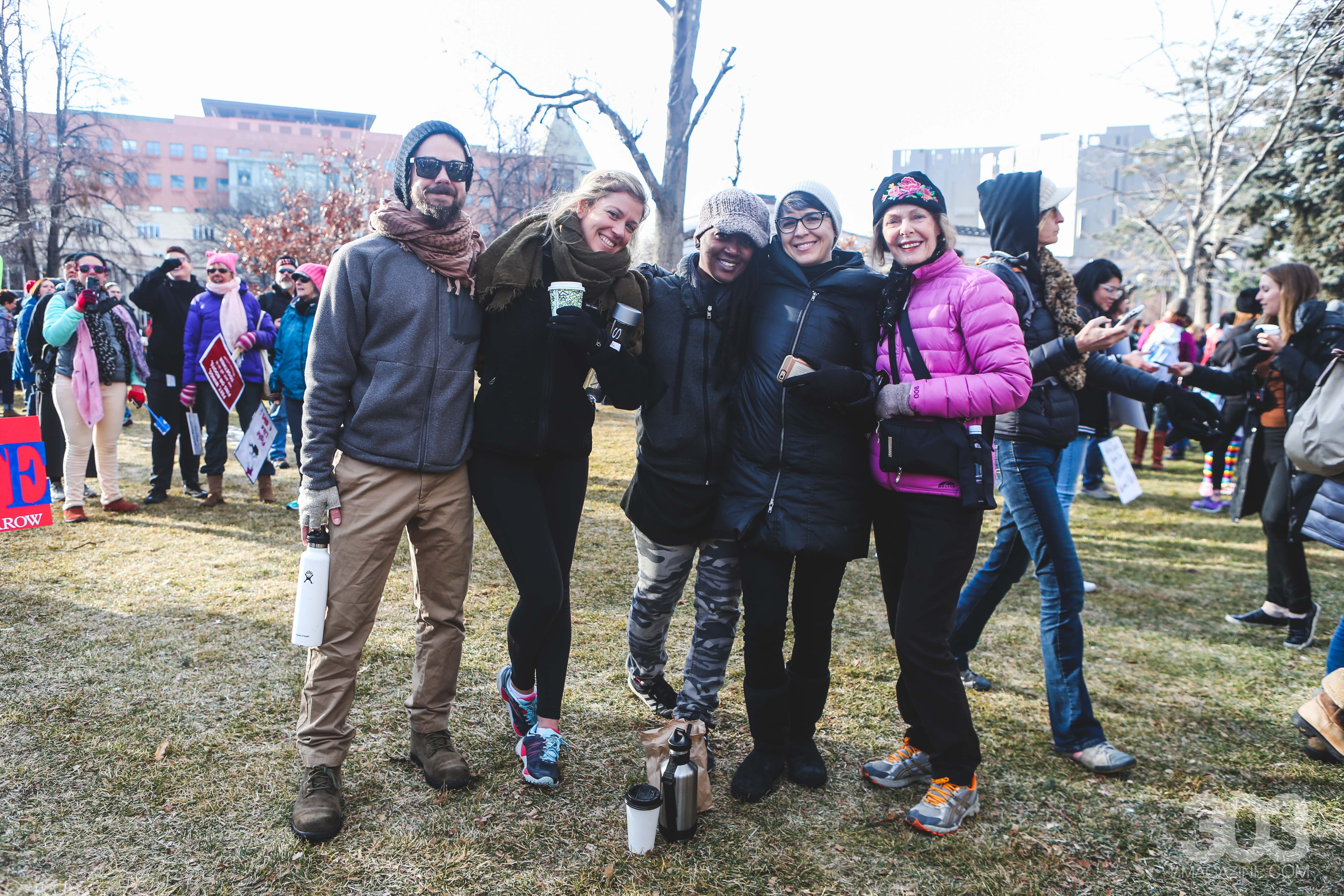 “Because [Trump is] so loud and he’s so vocal about grabbing women, and nobody has done anything that hasn’t gotten him off the ticket and that’s fucking crazy so if we’re louder maybe then something will change.” – Erika Moreno 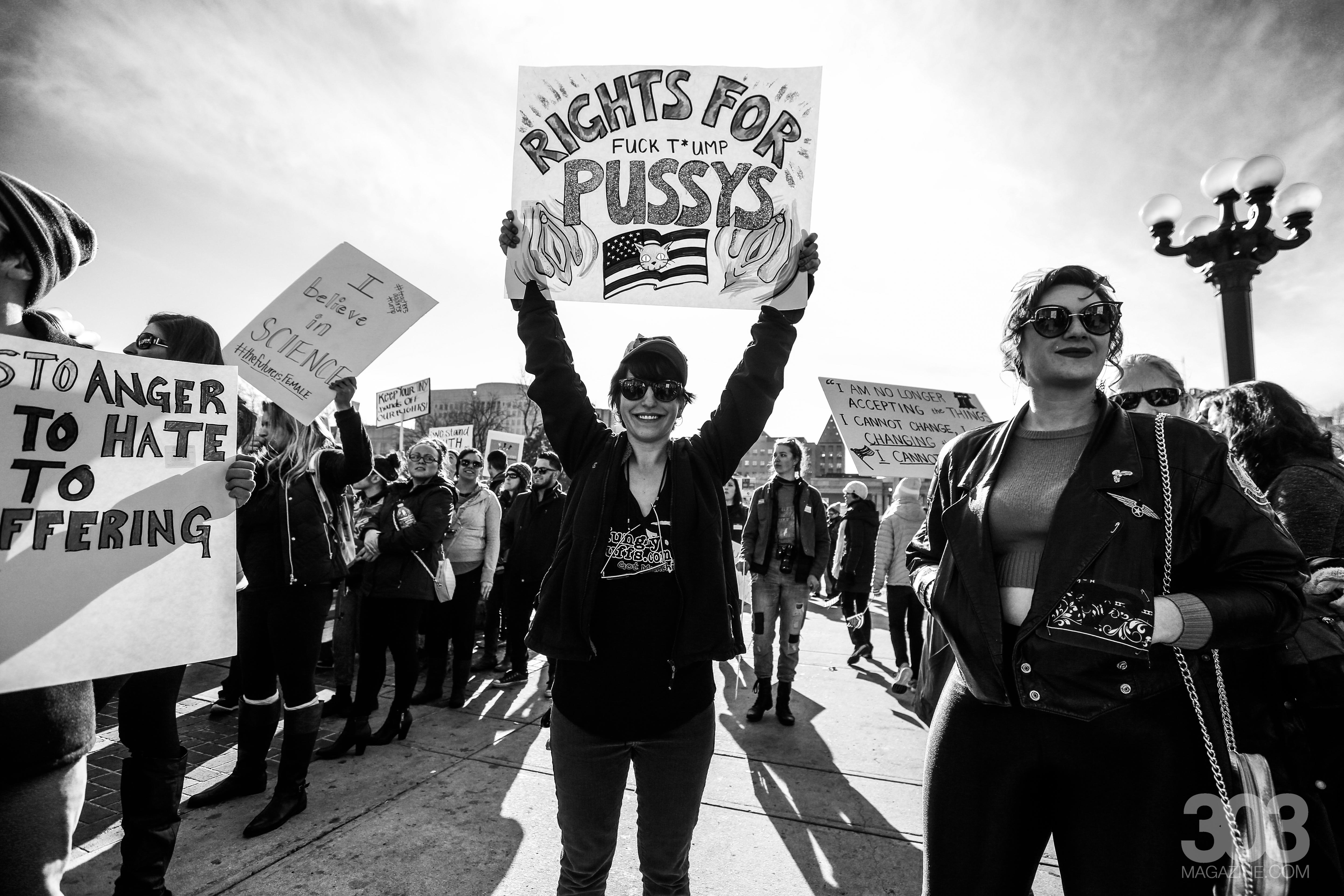 “I’m just happy to be here so I can be with my mom and help support as much as I can.” – Cope Dunphy

“[We’re attending the march] to support women’s equality and women’s rights [and for] basic human rights for all.” – Gary Linley

“I’m attending today because I’m terrified of what Trump is going to take away from everybody and women’s rights. I’m just scared. I’m very scared.” – Stephanie Jamial 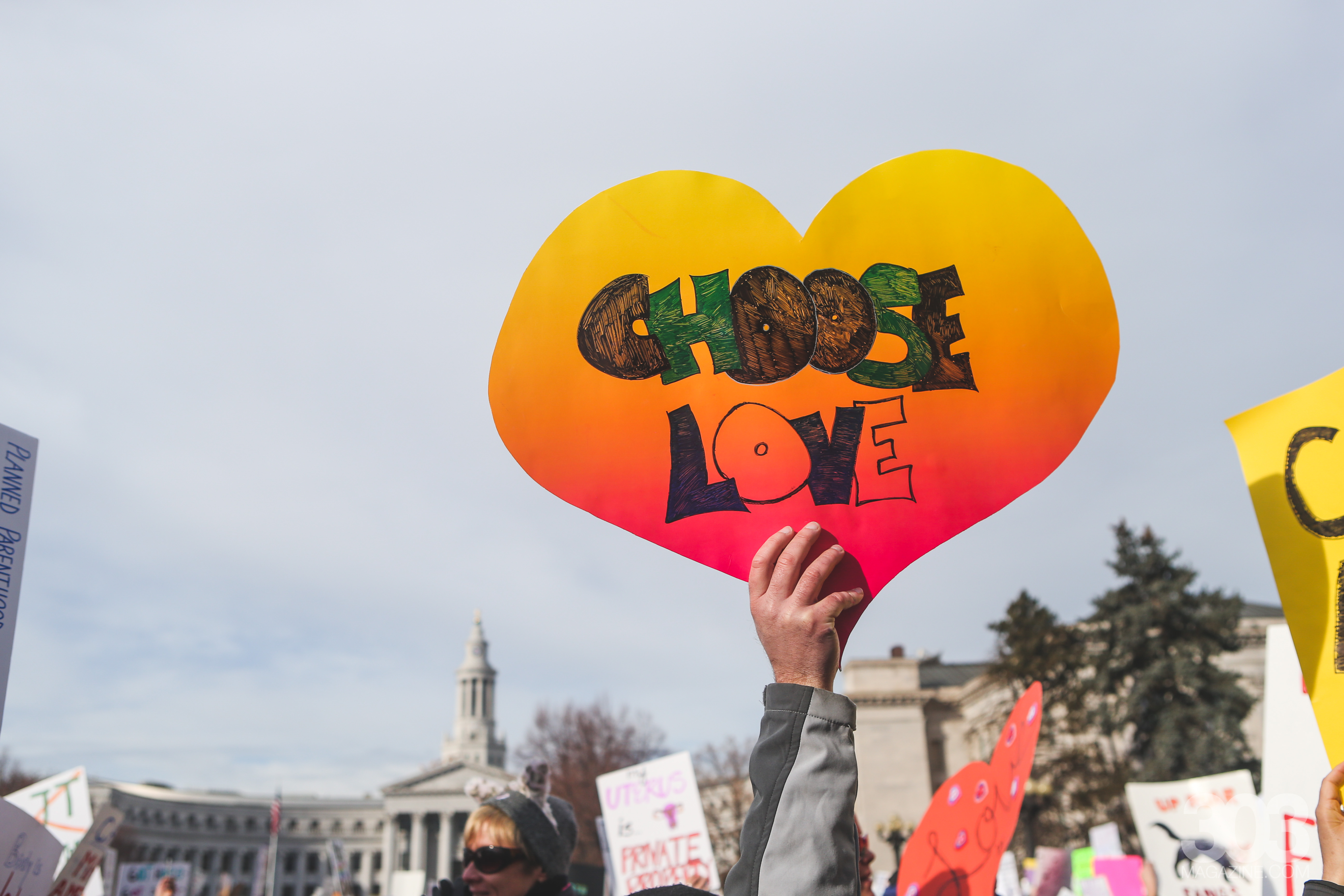 “So my mom passed away, and mostly I’m here for her because she’s not here to see this and this is amazing. I mean maybe she saw something like this before but this is something big. And also this is a part of my history which is really important to me. I want to be here and stand with all of the women everywhere, not just in America but all over the world and show everybody that we’re unstoppable and we’re important, and we deserve equal pay and equal healthcare and feminine healthcare and we deserve to be stood with and supported.” – Chante Thomas

“[We are here] mostly in support that we need to stand strong together and not let people run us down… Respect and dignity is all we are asking for.” – Kelsey Anne Buell

” I am here for my daughters and for my wife.” – Jason Robertson

“I feel like we need to be equal and we are marching to be equal” – Caelie, Jennifer’s daughter 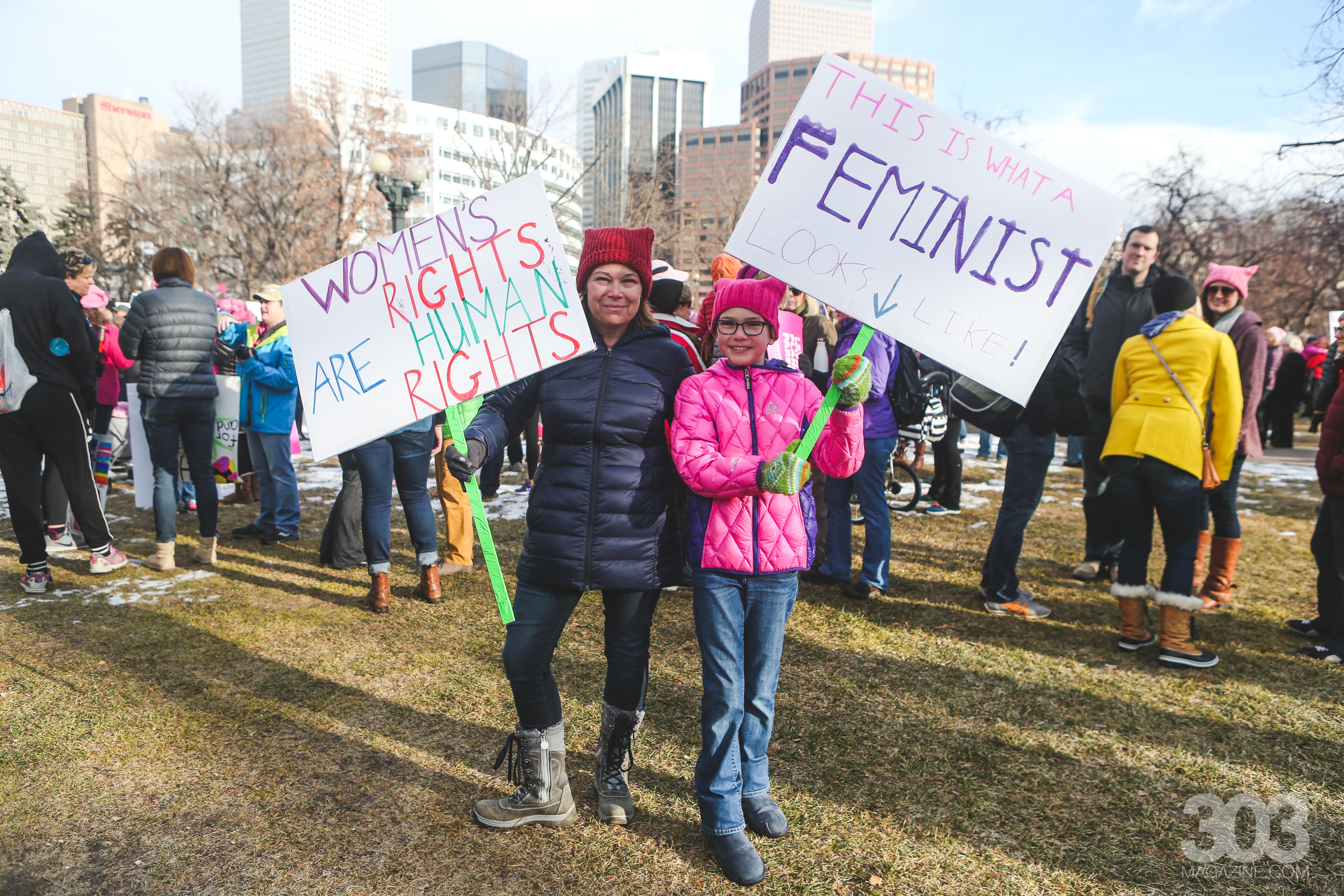 “We all need to be here representing change and the diversity of our nation and I have four kids, she’s my three of four and I don’t think there is anything more important than teaching her to be a woman of her country.”  – Emily Finomore

Go here to see all of our photos from the Women’s March on Denver.