The Art Bikes Series began with two custom cycles, the Pager.One featuring the art of Tristan Minton, and the Meraki, featuring the art of KiriLeigh Jones. These first two bikes helped put the wheels in motion for White Rhino Customs’ R[Evolve] campaign, whose mission it is to revolutionize the cycling industry through culture, creation and collaboration. 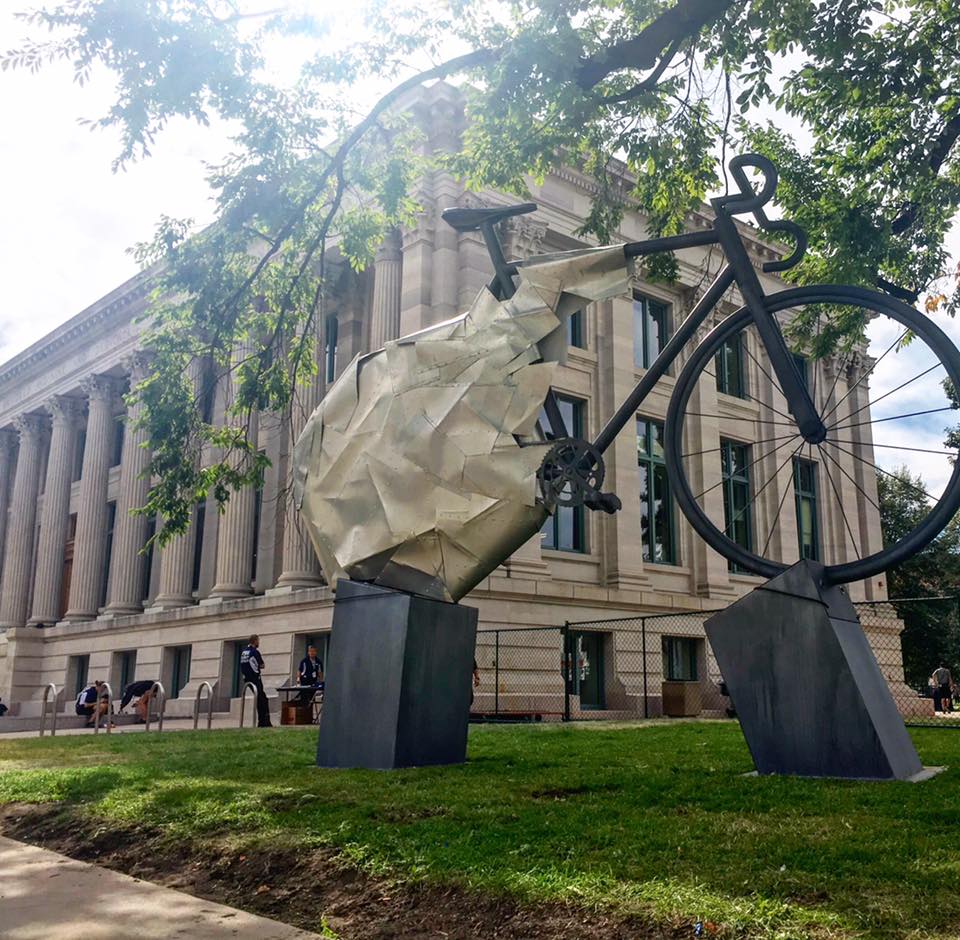 The launch of the R[Evlove] campaign saw the installation of a large outdoor bike sculpture in front of the McNichols Civic Center Building in September titled, Elevated: A Tribute to Colorado’s Cycling Community. Elevated was created by Ian Houghton, owner and CEO of White Rhino Customs, with the help of Steven Derks, owner of Gallery 801 and Brandi Farley. The sculpture aims to epitomize the relationship between man and machine and stand as a tribute to the cycling community.

On December 14, 2016, White Rhino Customs celebrated its culmination of the Art Bikes Series and the R[Evolve] campaign at the McNichols Civic Center Building with The Art of Cycling. Partnering with local non-profits Im’Unique, Bikes Together and Arts Street, it brought The Art of Cycling to life as a gallery show and charity event centered around the culture of cycling. 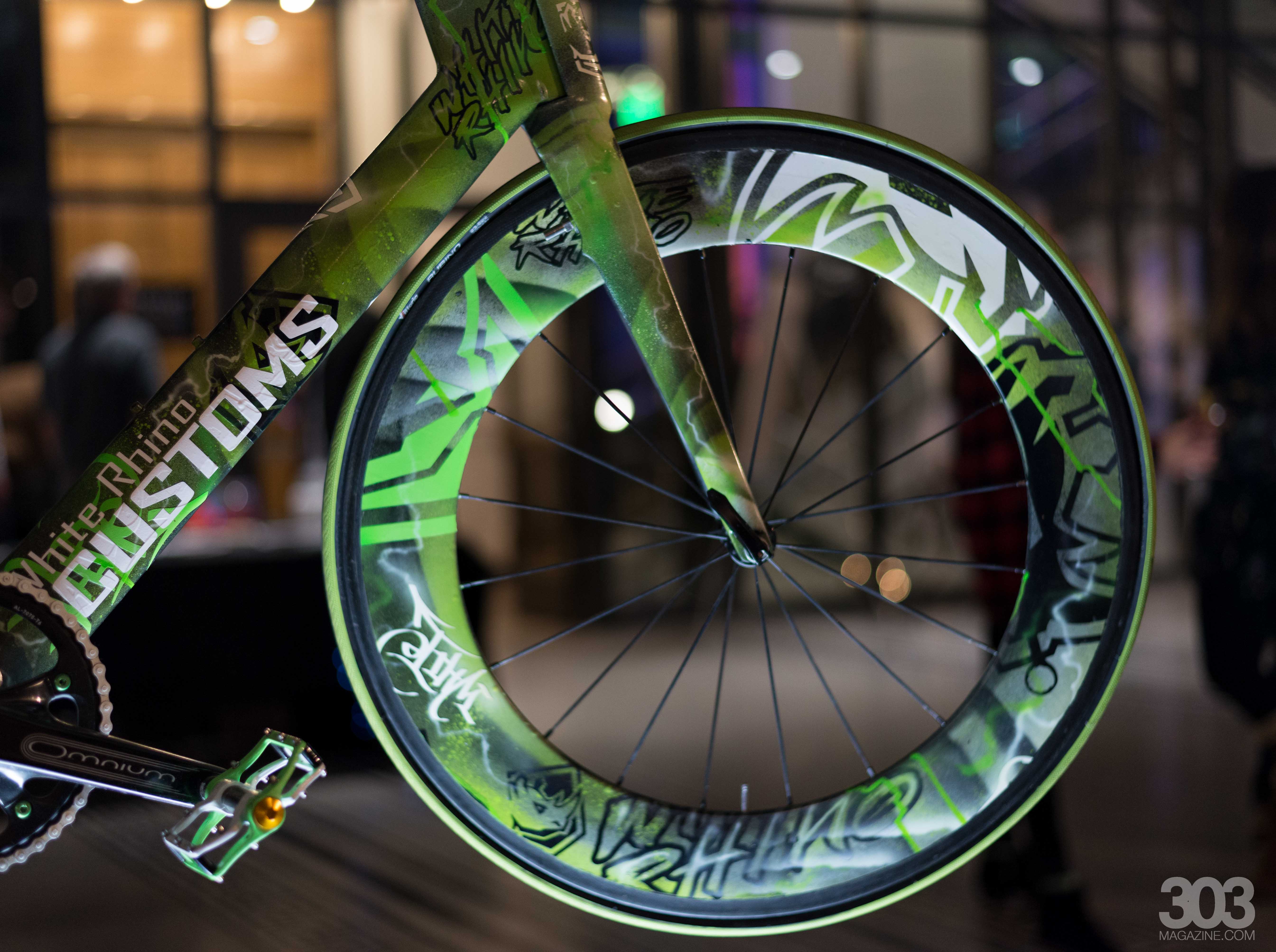 After the creation of the Pager.One and the Meraki bikes for the Art Bikes Series, a third bike was added, Tess, featuring art by Jason Thielke. Through an online and in-person call for artists competition in October, White Rhino Customs added a fourth bike to the Art Bikes Series, Velocita, featuring art by the winner out of over 2,000 votes, Lindsay Martin. Due to overwhelming support for the artistic concepts of Ryane Urie and Michael Herring, the two artists were featured as designers of seats and wheel sets. 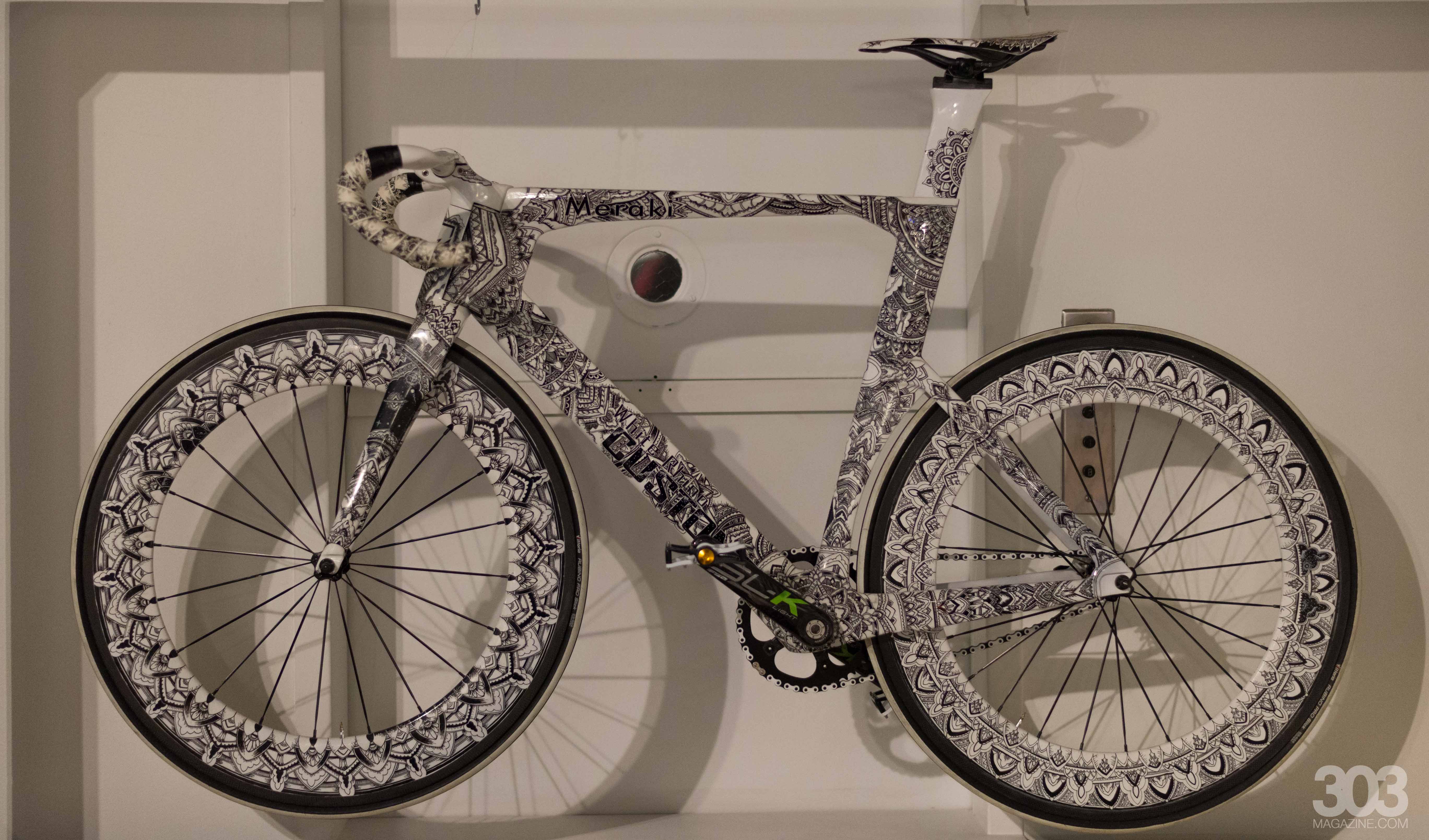 The Meraki, designed by KiriLeigh Jones and featured in the silent auction at The Art of Cycling.

KiriLeigh Jones created the Meraki bike in over 160 hours using paint pens to create her intricate mandala design. The Meraki was the only Art Bike to be auctioned off during The Art of Cycling, with a high bid of $1,025. The proceeds of the Meraki’s sale will go to Im’Unique, an organization dedicated to unifying communities and educating people on whole-body wellness. 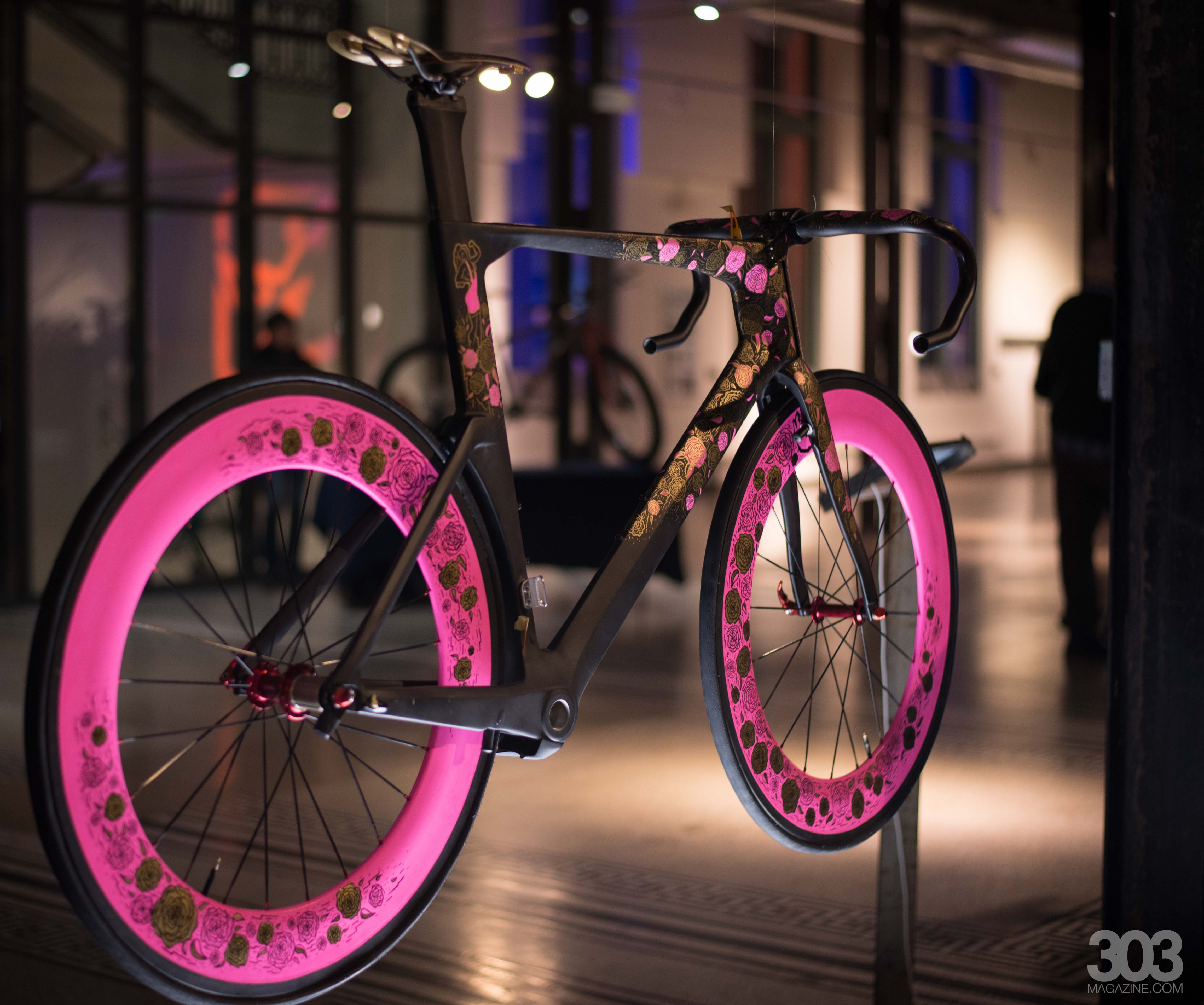 Lindsay Martin, a graphic designer for Pearl Izumi and winner of the call-for-artists competition, designed the Velocita with a feminine flare. The Velocita was inspired by Susan B. Anthony’s notion that cycling has helped to emancipate women by giving them freedom and creating self-reliance. Featuring bright pink and gold floral embellishments, the Velocita encompasses the feminine side of cycling. If one looks closely, Martin’s feminist icon creation and Sailor Jerry-inspired Bib Short Betty can be seen adorning the Velocita’s frame.

“My hope is that this bike would inspire more women and young girls to get out and ride a bike,” said Martin. 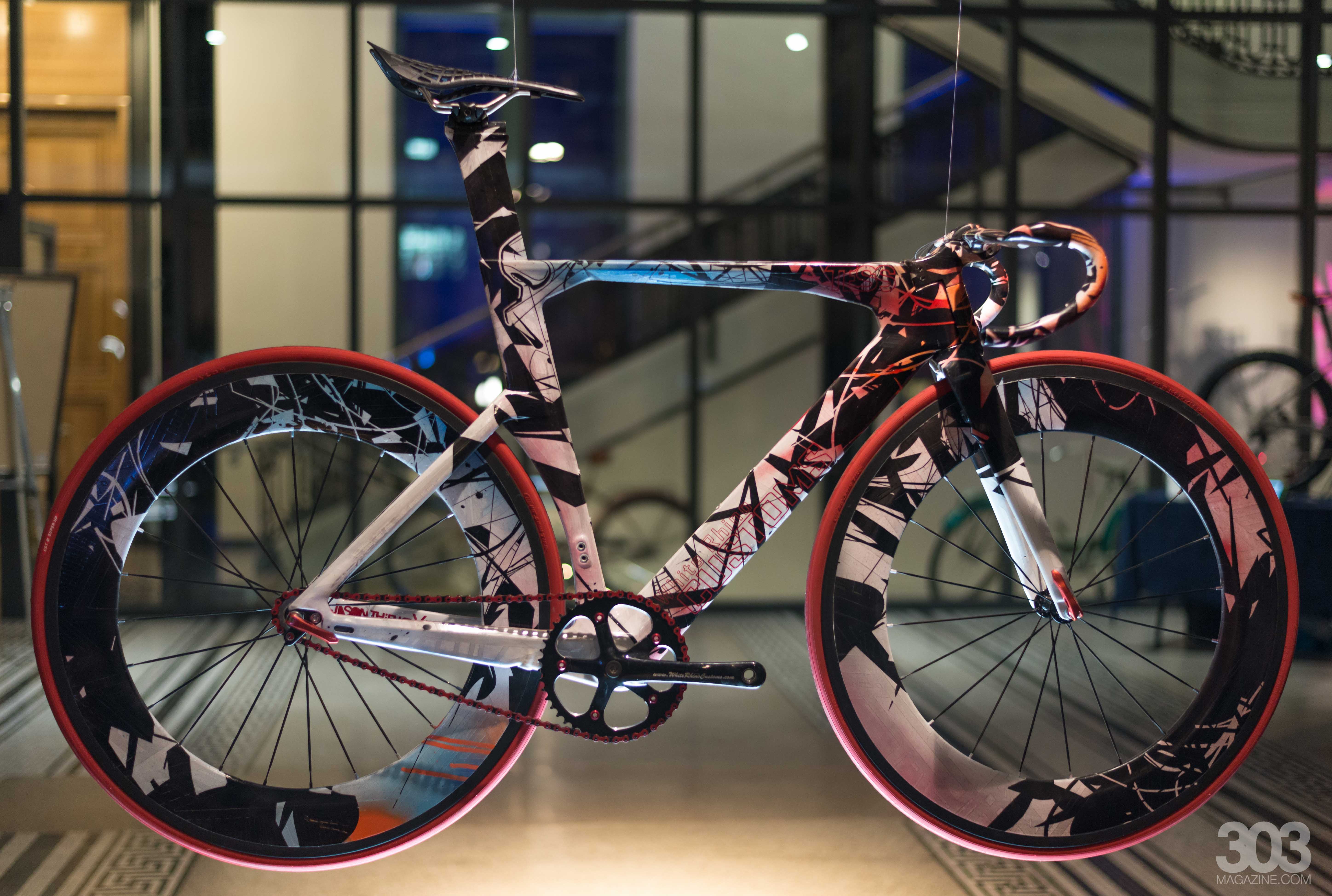 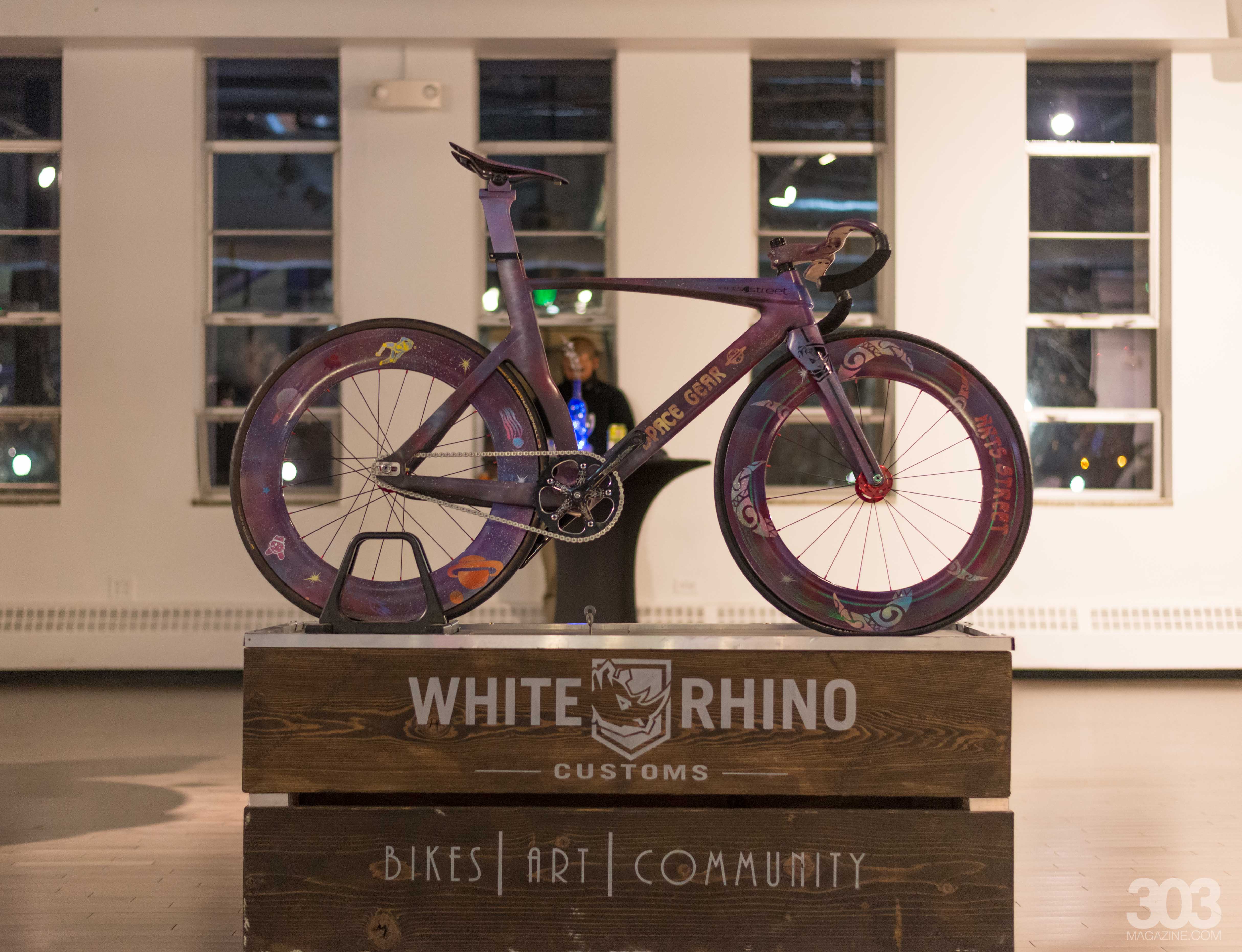 Along with the four main bikes created for White Rhino Customs’ Art Bike Series, students from Arts Street and Colorado High School Charter collaborated to create their own Art Bike, Space Gear, for The Art of Cycling. The Space Gear bike was raffled off to a winning attendee of the event at the end of the evening.

The Art of Cycling was a gallery and charity event that successfully brought together local artists and some of the cycling community’s most innovative companies and custom bike creators.

All photos by Alden Bonecutter unless otherwise noted.