Where to Enjoy Badass Holiday Lights Around Denver

Holiday lights are one of the magical parts of this season. When you’re a kid, you wonder why it doesn’t happen all the time. In Denver, all ages can enjoy cruising through neighborhoods that really embrace decorating their houses. Here at 303, we’ve explained where to go within three areas that are fairly saturated with decorations and created a list of the best commercial displays in Denver. It doesn’t seem a coincidence that the most notable and involved displays are out in the suburbs, so in order to see them you’ll probably need to drive.

Where to Go in Highlands Ranch 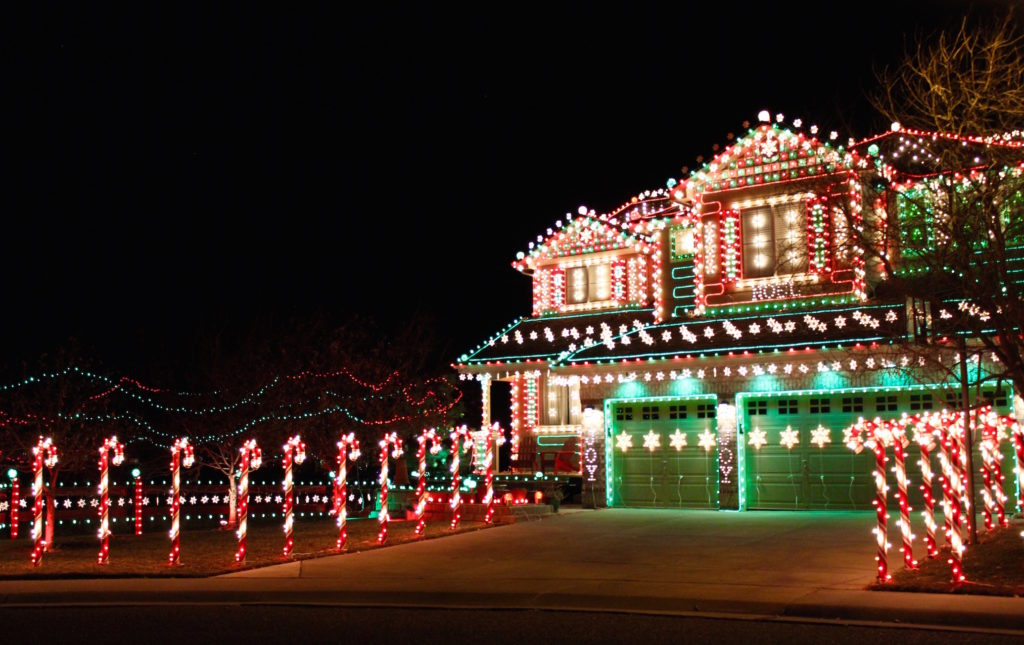 Highlands Ranch has a style that will please everyone. There are houses that are meticulously designed, with precision and color coordination, houses with large blow-up figures, moving snowglobes and trains and even the newest trend in holiday lights—minimalist laser designs projected onto the exterior of the house. The streets are quiet with little traffic, and no matter where you are you can see other light displays in adjacent cul-de-sacs. Even getting to Highlands Ranch is a beautiful adventure, with clusters of lit-up trees in Littleton on both the Santa Fe and I-25 sides.

You’ll want to see the Gingerbread House (pictured above, at 10221 South Fairgate Way) because the color coordination and precision of placement is truly remarkable. It will make you feel like a kid again. From there, continue following Fairgate Way, taking a left on Heatherwood Court. To your right you’ll see a house with a light display that flashes on and off, illuminating different sections at different times. It might bring flashbacks of certain EDM concerts.

Where to Go in Windsor Gardens 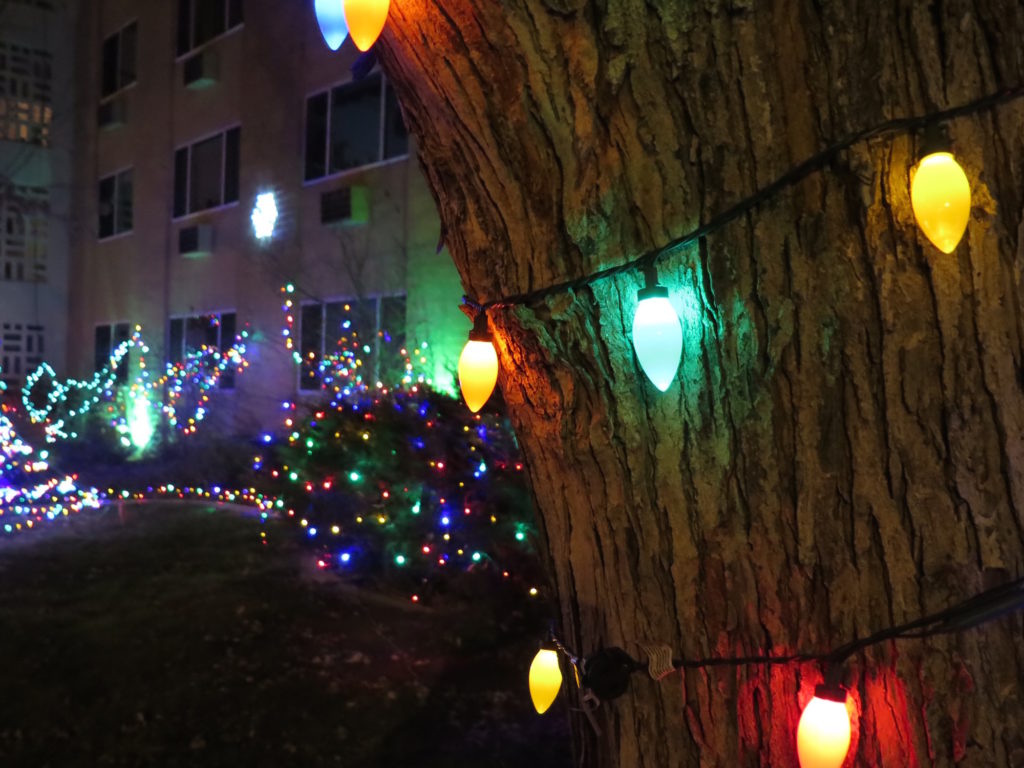 Almost every complex is decorated in Windsor Gardens. Photo by Cori Anderson

From Clinton Street to Alton Way near The Breakers Resort. See a map here.

What makes Windsor Gardens one of the most notable neighborhoods is not the creativity of the light displays, but rather the overall saturation. You can spend an easy half hour, winding around Alton Way and Clinton Street, and almost every building flaunts lights that are charming in their individuality. There’s also this quaint, almost vintage-suburban feel to the circular tour—one that reminded me of The Christmas Story (though I didn’t see any stockinged-leg-lamps in anyone’s window.) Enter from either Dayton or Alameda, and if you’re coming from more western sections of Denver on a weeknight, do yourself a favor and wait out the traffic because there’s almost no way around it.

Where To Go In Arvada 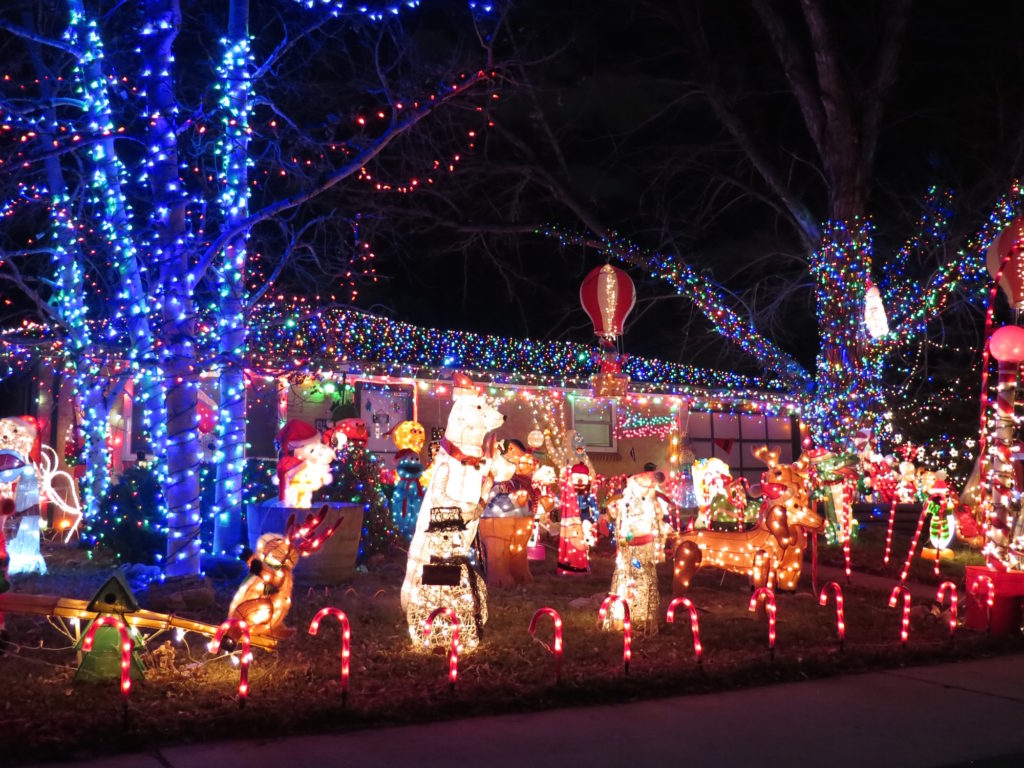 From Kipling Street to Sheridan Boulevard and from I-70 to 80th Avenue.

A popular trend in holiday lights is playing music, sometimes in coordination with the display. Some of the houses (which were too far to consider Denver) have a particular radio station to tune to as you look at their display. In Arvada, it seemed like every other display had some kind of playlist grooving along. One, on 4712 Dover Street, changed it up by having rock-n-roll renditions of Christmas classics.

What makes Arvada special is the funkiness of the displays. From West 46th Avenue to West 48th Avenue and from Carr to Everett Street, you’ll find several displays that are bright and alluring but lack a central theme or fluidity of design. The same one with the rock-n-roll boasts some of the most figurines in the yard I’ve ever seen—everything from Big Bird to penguins to the Abominable Snowman and even a huge wiener dog.

6611 Quay Street, on the north side of I-70 closer to Olde Town Arvada, advertises free “Kandy Kanes” and will have an in-person Santa Claus on December 23 from 7-8:30 p.m. They are set apart from other houses by their free gifts and ridiculously apparent holiday cheer.

If you haven’t gone to see the City and County Building all lit up for the holidays, put it on your list now. Pictures don’t do it justice. And even driving by in your car lacks the splendor of walking in the courtyard, your breaths forming little clouds in front of your face. This display is historic, stemming from one lit Christmas tree in 1914 and evolving to the brilliant LED extravaganza that you can see today. Using tens of thousands of lights, it is considered to be the largest single holiday spectacle in Colorado.

Enjoy a stroll by the front of this historic building, which is classically lit up with red and green lights. With all the traffic from the station—people gathering to take pictures by the human-sized stars—the atmosphere outside is quintessential for the holidays.

Trees are draped with red and white lights, sparkling snowflakes hang from the sky and there is a carousel blasting light from beneath a multi-colored circus tent. What about that doesn’t sound like a fun holiday excursion? Great for families and early dates especially, though anyone with a weakness for carousel rides would have a lovely time.

Both the York Street and Chatfield locations will have light displays until January 1, 2017, excluding Christmas Eve, Christmas Day and New Year’s Eve. York Street’s display is called Blossoms of Light and Chatfield’s is called Trail of Lights and both are completely magical. Tickets for adults are $13, $11 for members. Visit their website for more information and hours.