When news came out about the Denver Art Museum’s latest exhibit, Star Wars and the Power of Costume, a lot of us jumped with barely-contained glee (also known as ‘fanboy-ing’). What George Lucas began as a film with Star Wars in 1977 has turned into an institution over the decades.  It has garnered a noteworthy legacy in pop culture, cinematic influence, and loyal fans that could talk all day about how Han Solo shot first. Beyond the characters who will always be iconic is the power of narrative through wardrobe. Would Darth Vader be as intimidating without his all black getup? Would Queen Amidala appear as powerful without her luxurious garments? Stefania Van Dyke, the Star Wars and the Power of Costume special project lead and interpretative specialist at the Denver Art Museum let 303 know some of her thoughts. Read on for her insights and to see what costumes captured us the most. 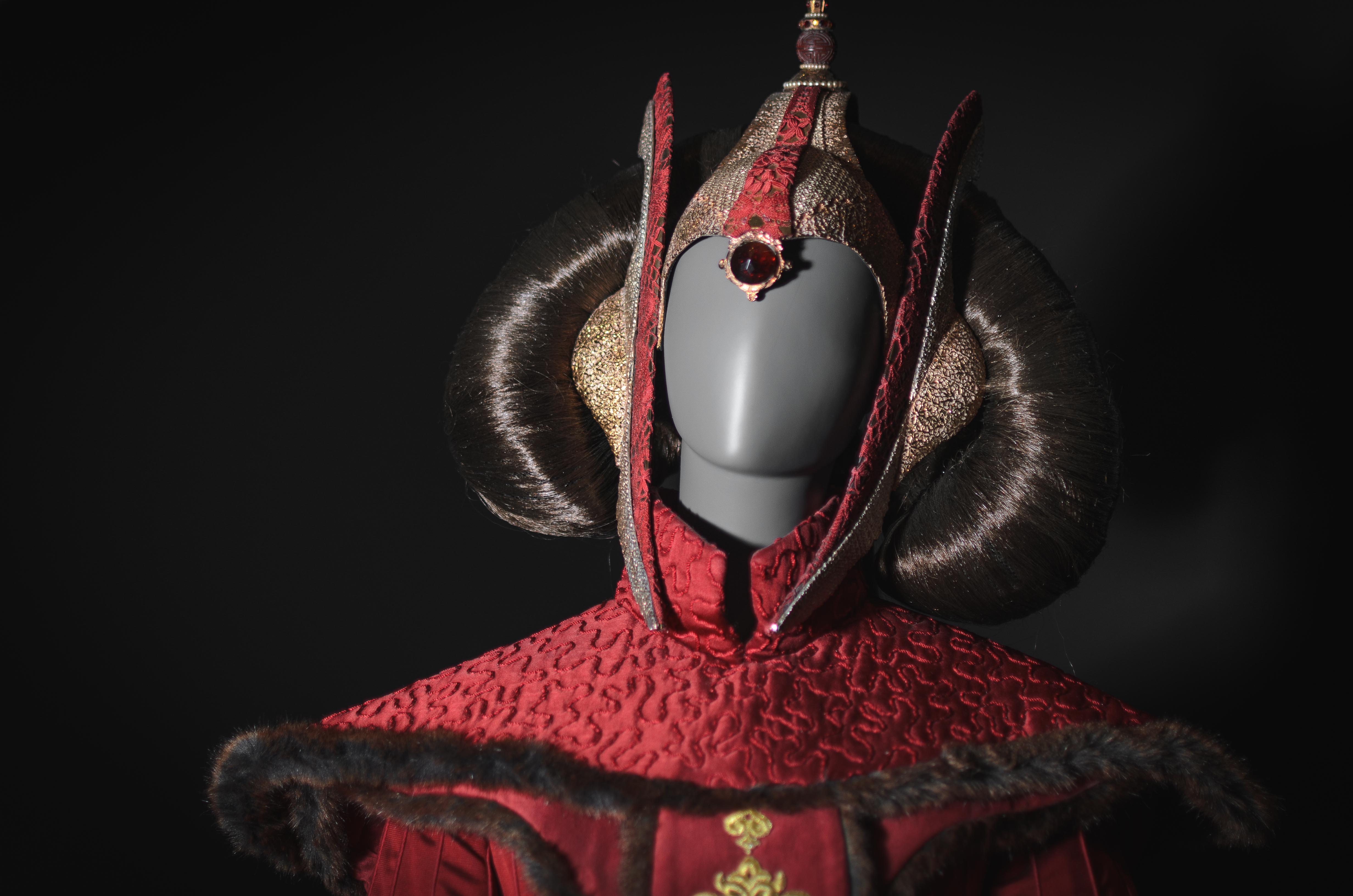 Queen Amidala’s most recognizable costume is made of silk, faux fur, and vacuum-formed parlor lights powered by a battery on wheels.

303: What made you choose Denver to present The Power of Costume?

Stefania Van Dyke: Star Wars has such a loyal and wide fan base, we thought this exhibition could be a great way to broaden our audience and introduce the museum to people who may not have been here before. But the costumes are also just amazing in terms of creativity and craftsmanship, that they’re right at home at the Denver Art Museum. In fact, we are centering the story in our presentation around the intense process that went into creating these costumes, from an idea, to first sketches on paper, to gorgeous finished renderings, to the unique materials and crafting of the costumes in three dimensions, to, finally, bringing them to life through the actors who embody the characters. 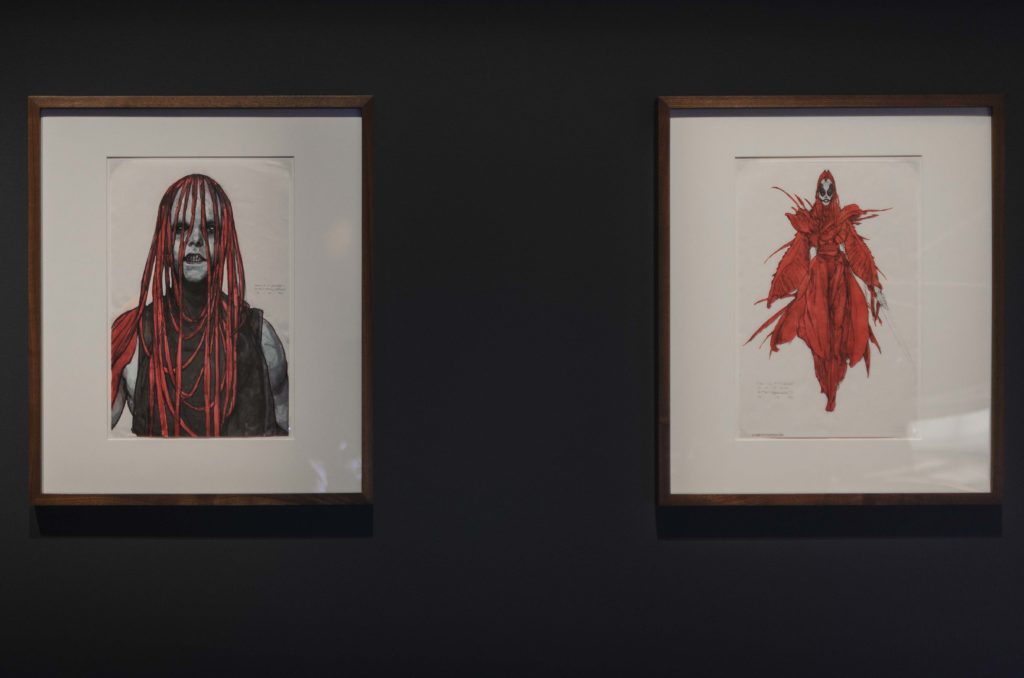 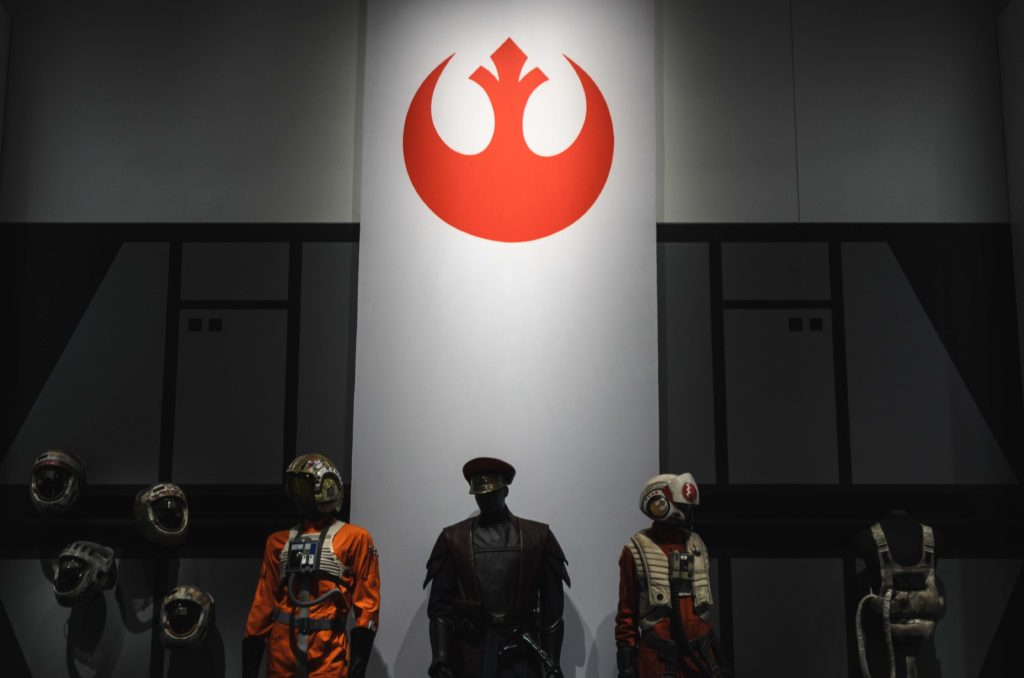 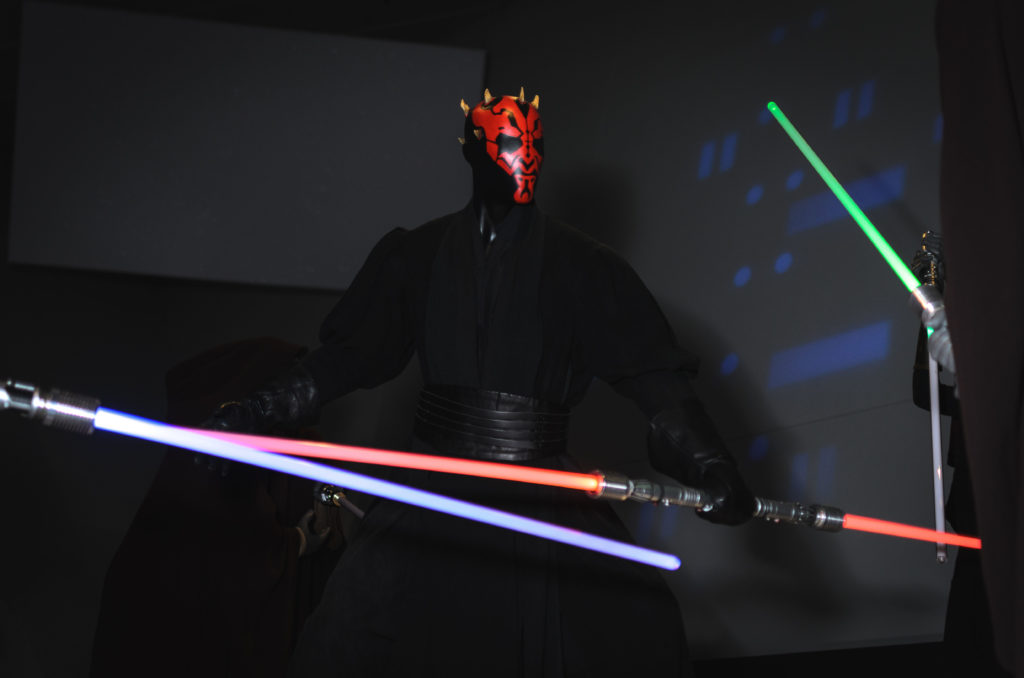 Darth Maul morphed into variations of witches and clowns and eventually became the horned, tattooed villain.

303: Favorite costume(s) that we should be looking out for?

SVD: Personally, I was most excited to see my favorite characters – Chewbacca, Han Solo, Princess Leia, and Boba Fett.  So there’s a nostalgic connection for me. I was three when the first film came out in 1977 and went to see it with my three older brothers. Star Wars was an important part of my childhood, as it has been for so many people. But I also have some favorite costumes from the later films, particularly Padmé Amidala’s Peacock and Brown gown, which is absolutely stunning and intricately detailed. But it was ultimately deleted from the film (Episode III: Revenge of the Sith), which amazed me. So much work and time can go into one costume and it might not ultimately be seen on film. I also love seeing Rey—I think kids today feel the same way about Rey as I felt about Princess Leia. 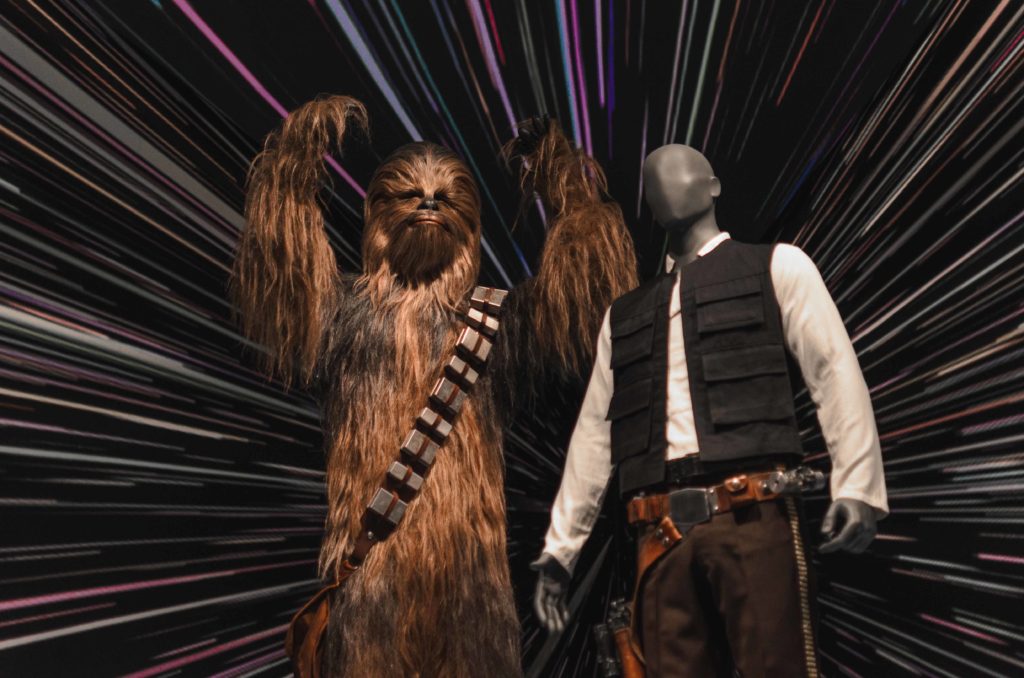 Han Solo’s canvas vest over cavalry-style shirt with a handcrafted leather belt. Chewbacca’s costume is made of a knitted wool base and the surface is hand-knotted with 15 pounds of multi-colored yak hair and mohair. 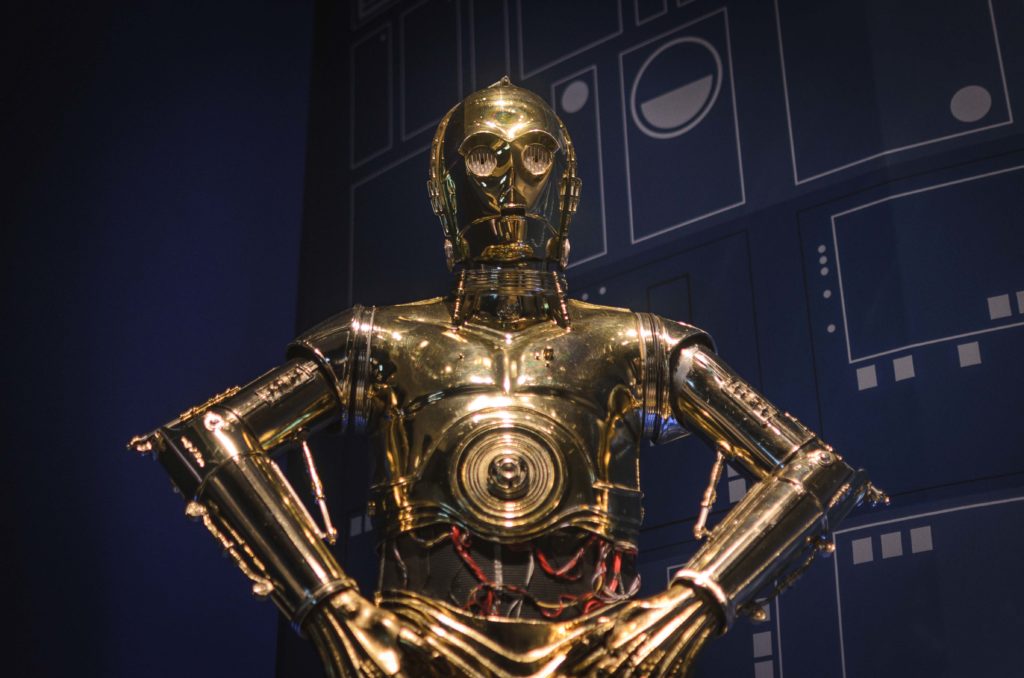 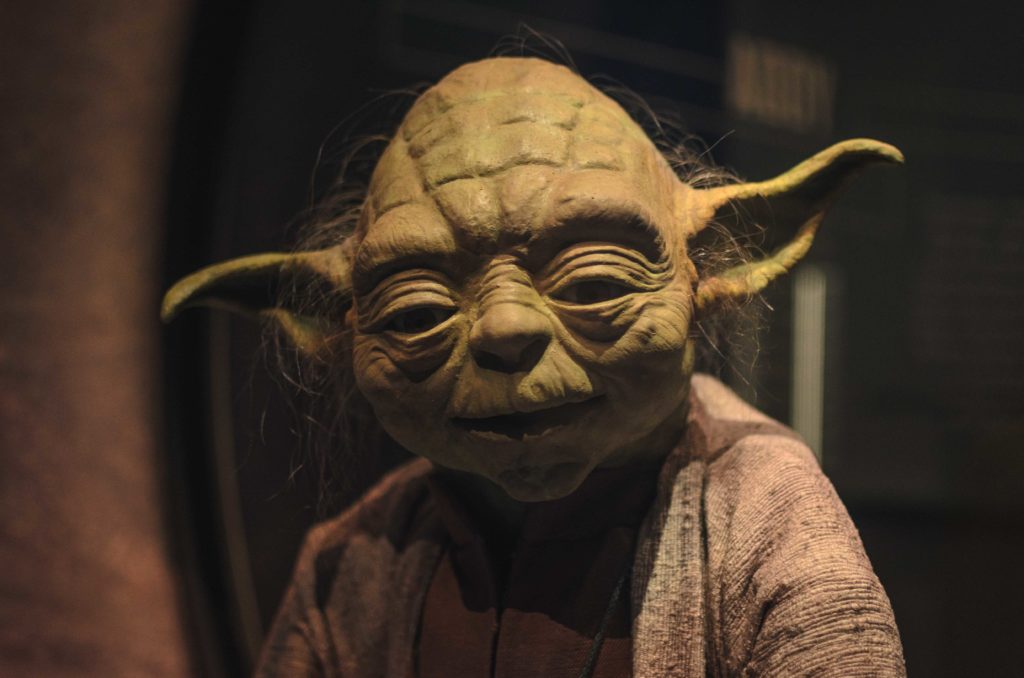 303: Why is Costume so iconic and essential on films like this?

SVD: Costume really defines [a] character. Many of the actors actually said that they only transformed into their characters once they put on the costumes. In the prequels, they used a lot of blue- and green-screen technology for special effects, so in many cases, a costume was an actor’s only concrete way “in” to a character. Also, think about how some characters would look if they had different costumes, especially for those who only had a few looks during the course of the trilogies. Can you imagine Han Solo with a floppy Peter Pan collar? He was originally supposed to have one but Harrison Ford refused (“No. Can’t wear that.”). And Chewbacca originally looked like a lemur wearing a t-shirt and booties. 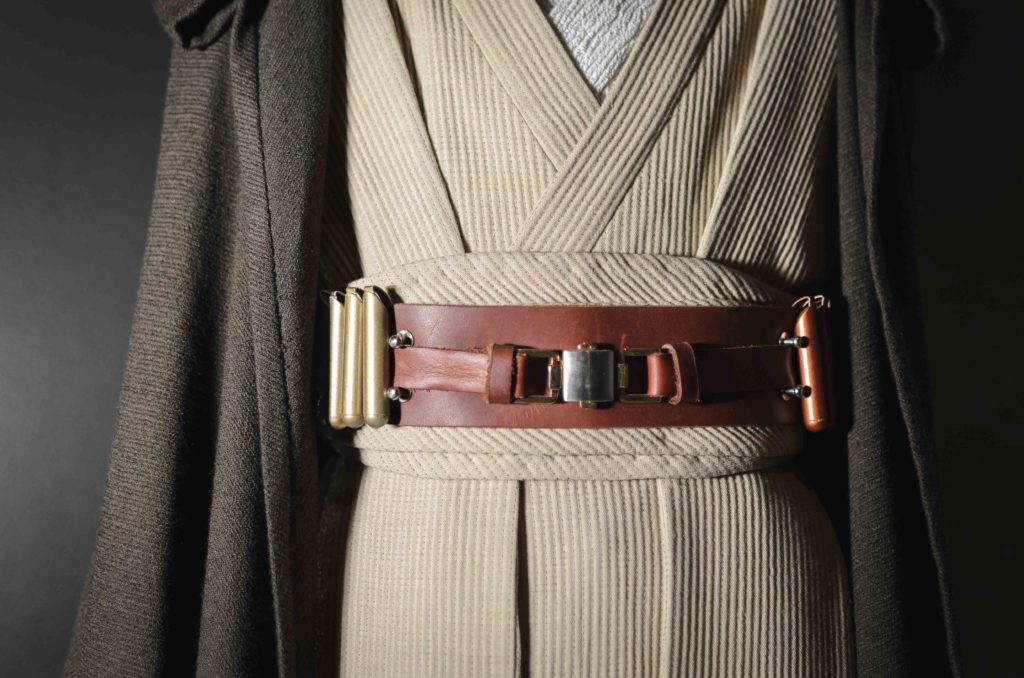 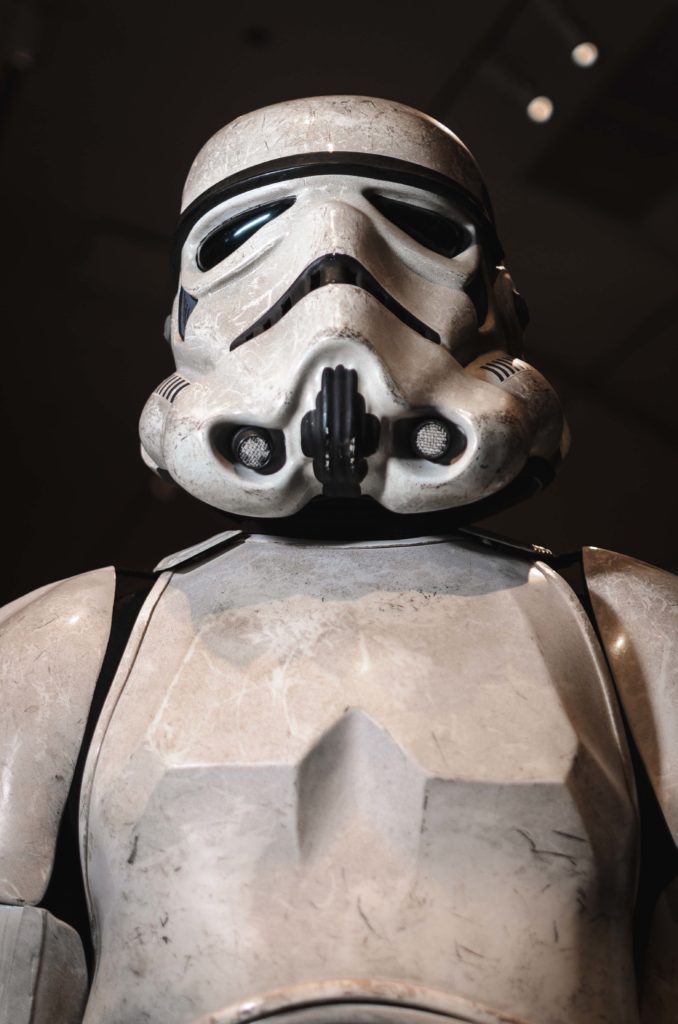 The infamous villain has his own corner for you to fear and awe over. Complete with the foreboding Imperial March we all know and love as you enter his lair. Darth Vader’s costume is a leather undersuit with fiberglass helmet and armor. 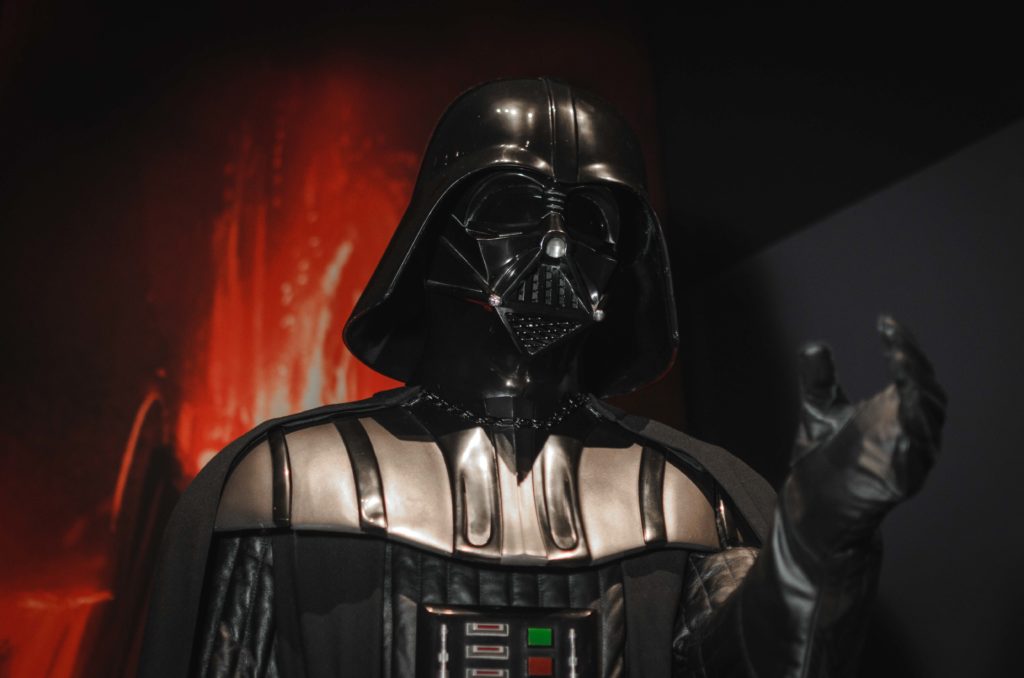 Darth Vader in Cape, worn by Hayden Christensen in Episode III: Revenge of the Sith

The exhibit has costumes from the most recent Star Wars film and proudly displayed Rey’s outfit from Episode VII: The Force Awakens. Her costume is made of salvaged gauze wrap, “Govath”-wool traveler’s boots, and her goggles incorporate stormtrooper helmet lenses. 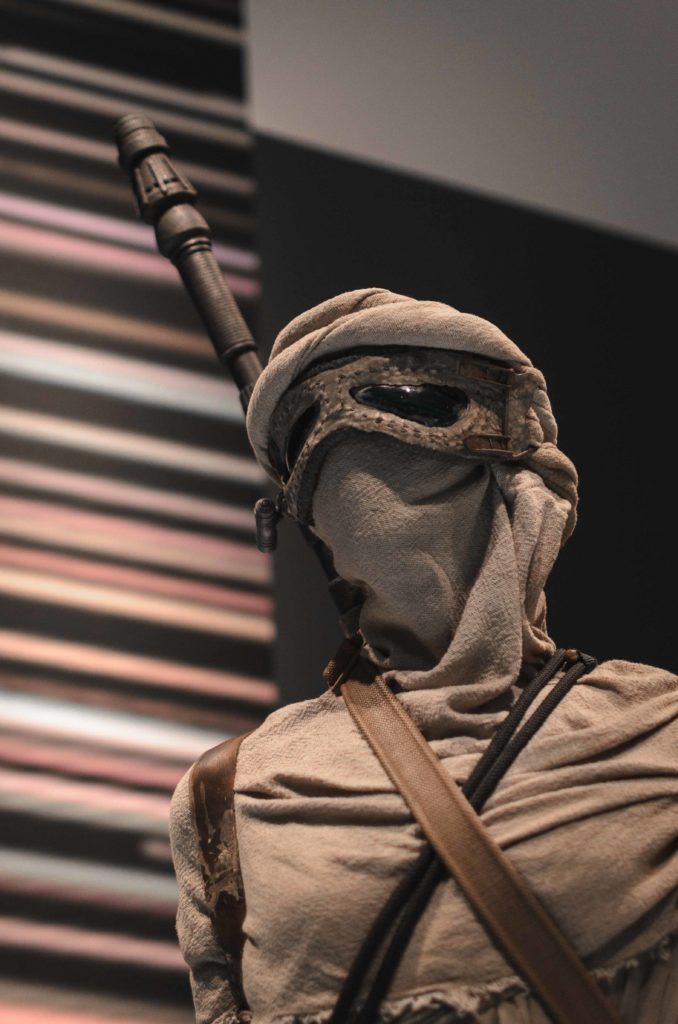 Rey, the latest protagonist in Episode VII: The Force Awakens.

Whether you loved or hated Episode I: The Phantom Menace, Queen Amidala’s lavish wardrobe has always been favored. Major effort and design went into designing extravagant garments to display a side of royalty the Star Wars audience hadn’t yet been introduced to. Here is a velvet robe with bronze metallic organza and seed pearls, underdress of silk taffeta, and a gold-plated headdress. 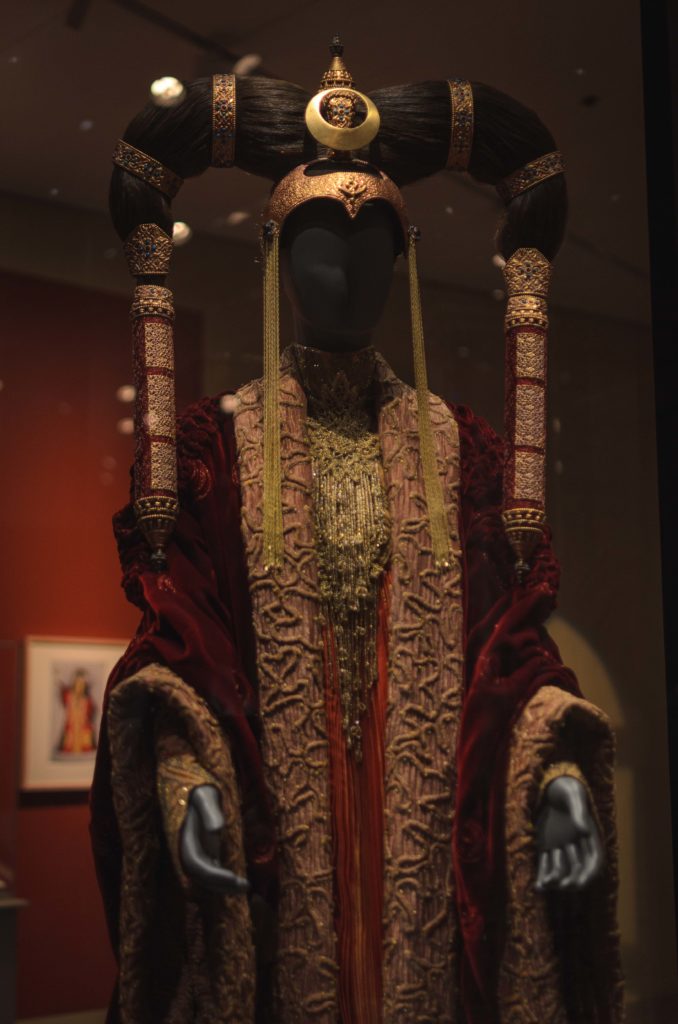 A minor role doesn’t mean the costume would be any less luxurious. Queen Apailana, played by Keisha Castle-Hughes, appeared briefly in Episode III: Revenge of the Sith. The piece is made of silk devore (burnout) cloak with hand-strung vintage sequins. 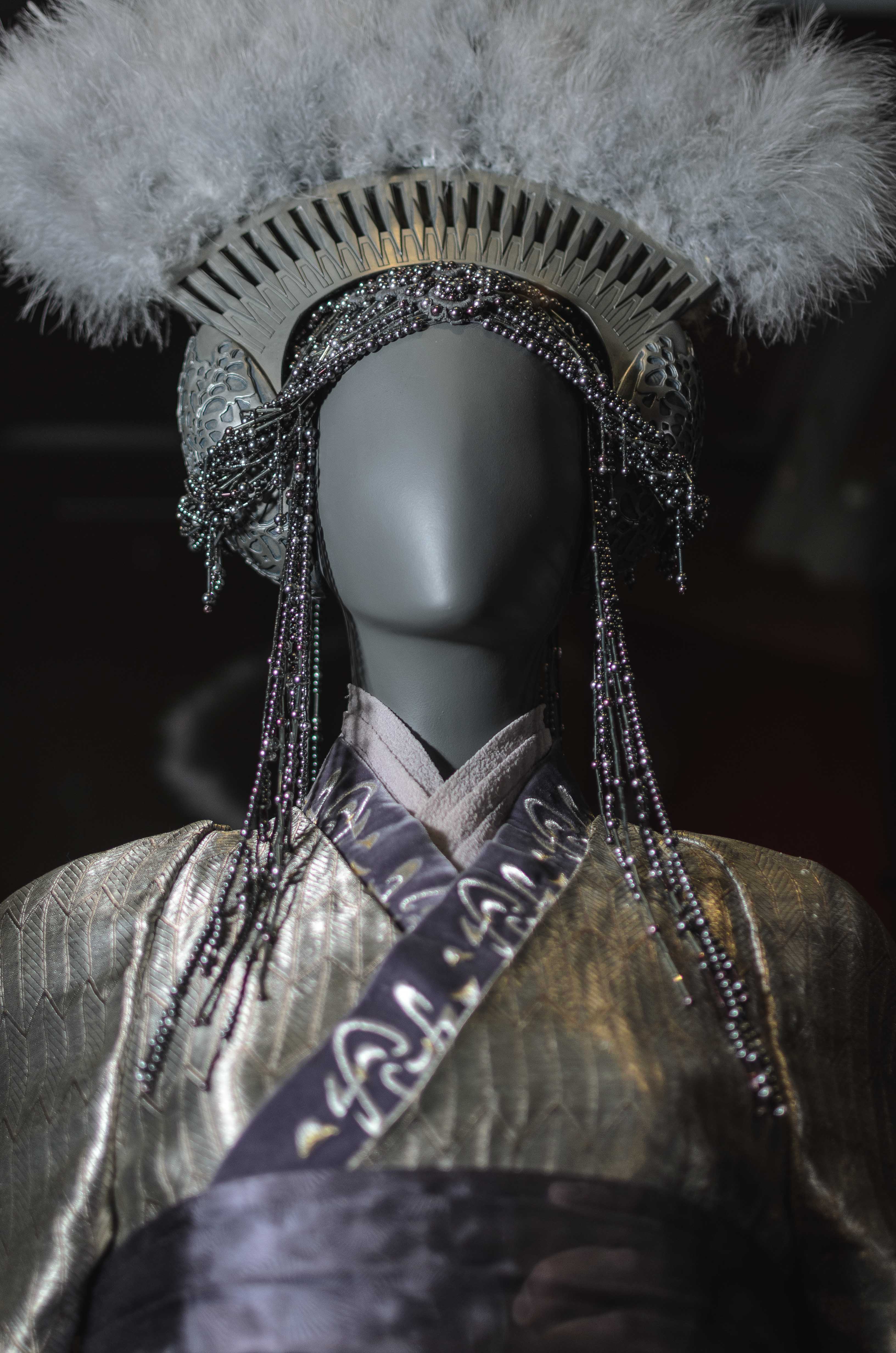 Bounty hunter Boba Fett’s costume was originally considered for Darth Vader. The suit pictured below was customized with dents and mismatched colors. Actor Jeremy Bulloch mentioned how dangerous he felt when he put the costume on. 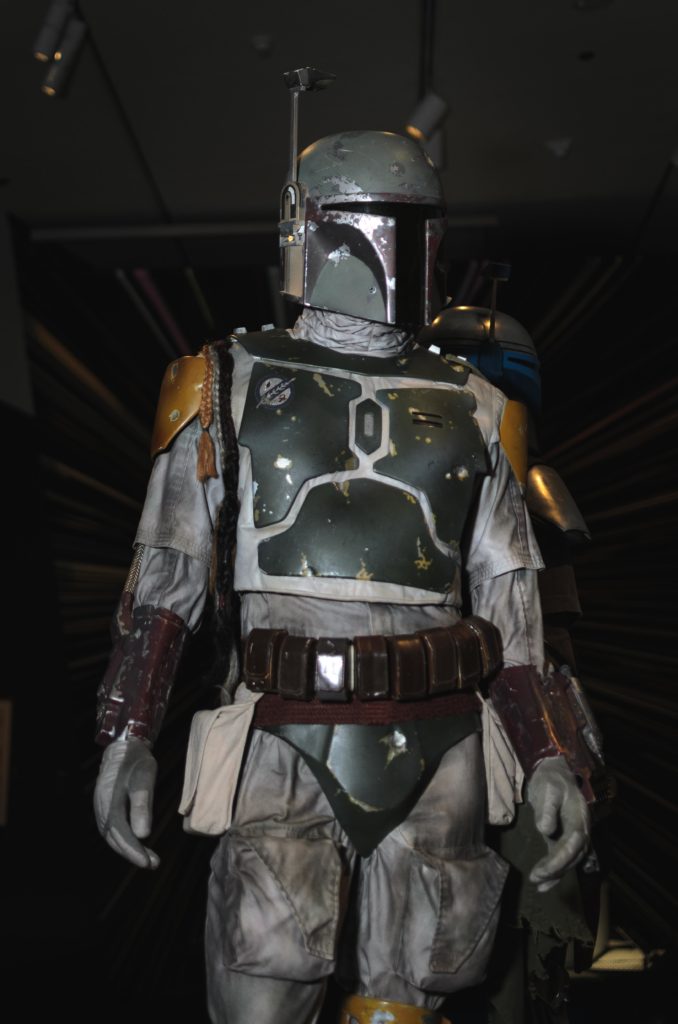 Boba Fett with helmet and jetpack from Episode VI: Return of the Jedi

With concept drawings, fabric samples, and details about dying, printing, and sewing garments, it’s incredible to see behind the curtain of a film that wouldn’t be complete without costumes. Colorado Governor John Hickenlooper was also predent this morning and recalled how watching Episode IV: A New Hope when it first premiered was a transformative experience and introduced a mythic narrative and special effects like no one had seen before. He also expressed his excitement over a culturally-rich experience and how this is an exhibition you won’t forget. So don’t miss Star Wars and the Power of Costume which opens on November 13, 2016 and runs through April 2, 2017. Buy tickets here. 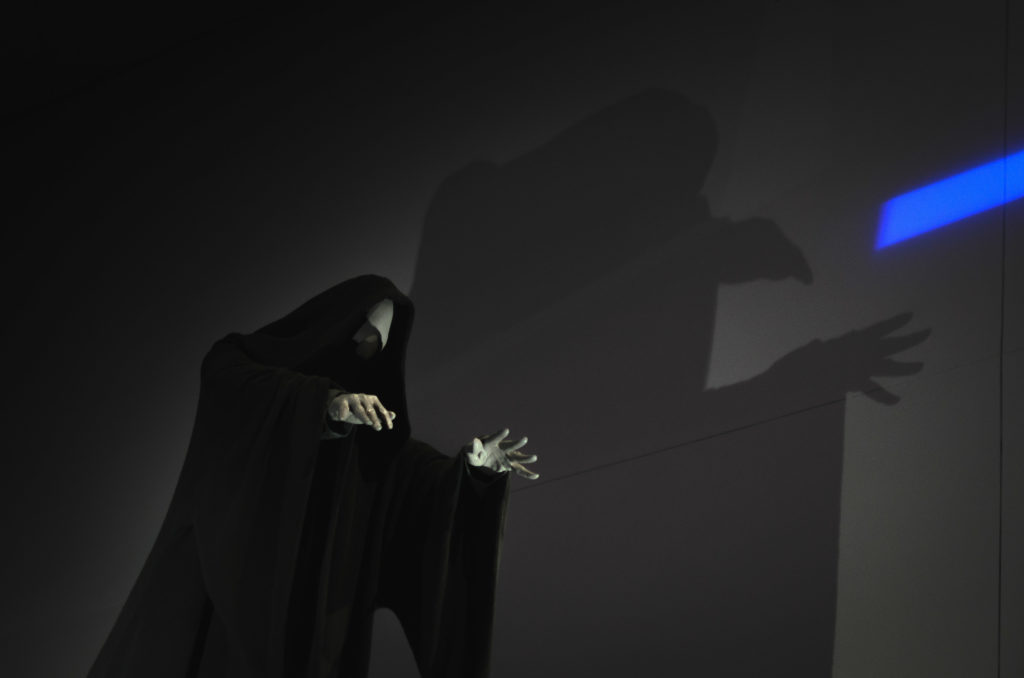 A black robe fit for a villain. 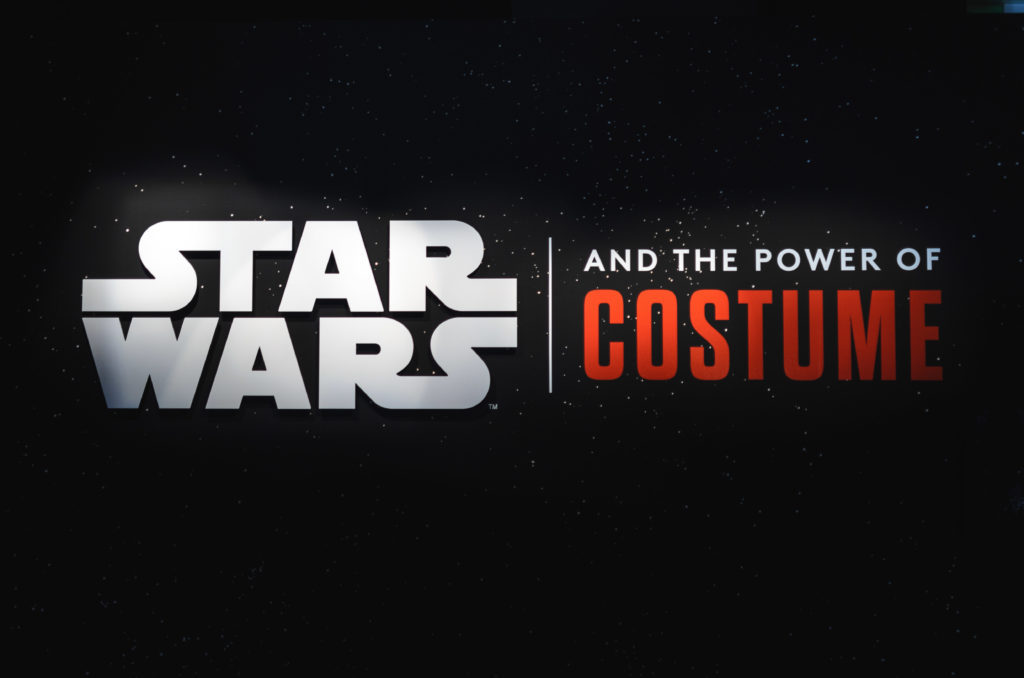