Review – Puddles Pity Party Was Just What We All Needed

If ever anyone needed a pity party, it was after this hellacious week. First, Trump wins. Then, Leonard Cohen passes away. Then Leon Russell died. It’s safe to say that some of us were feeling a bit down and out.

There is no better scenario than what transpired Friday evening at the Soiled Dove Underground to have cheered us up, coaxing us out from beneath that heavy cloak of melancholy and encouraging us to remember that America is great—and will continue to be great. From deep within the colossal void of despair, Puddle roused us back to life. The show was completely sold out—which only further deepened my love for Denver and the wonderful freaks who inhabit it, to know that there are at least a hundred other people out there who want to see a hulking, grown ass man in full clown regalia singing like an angel. 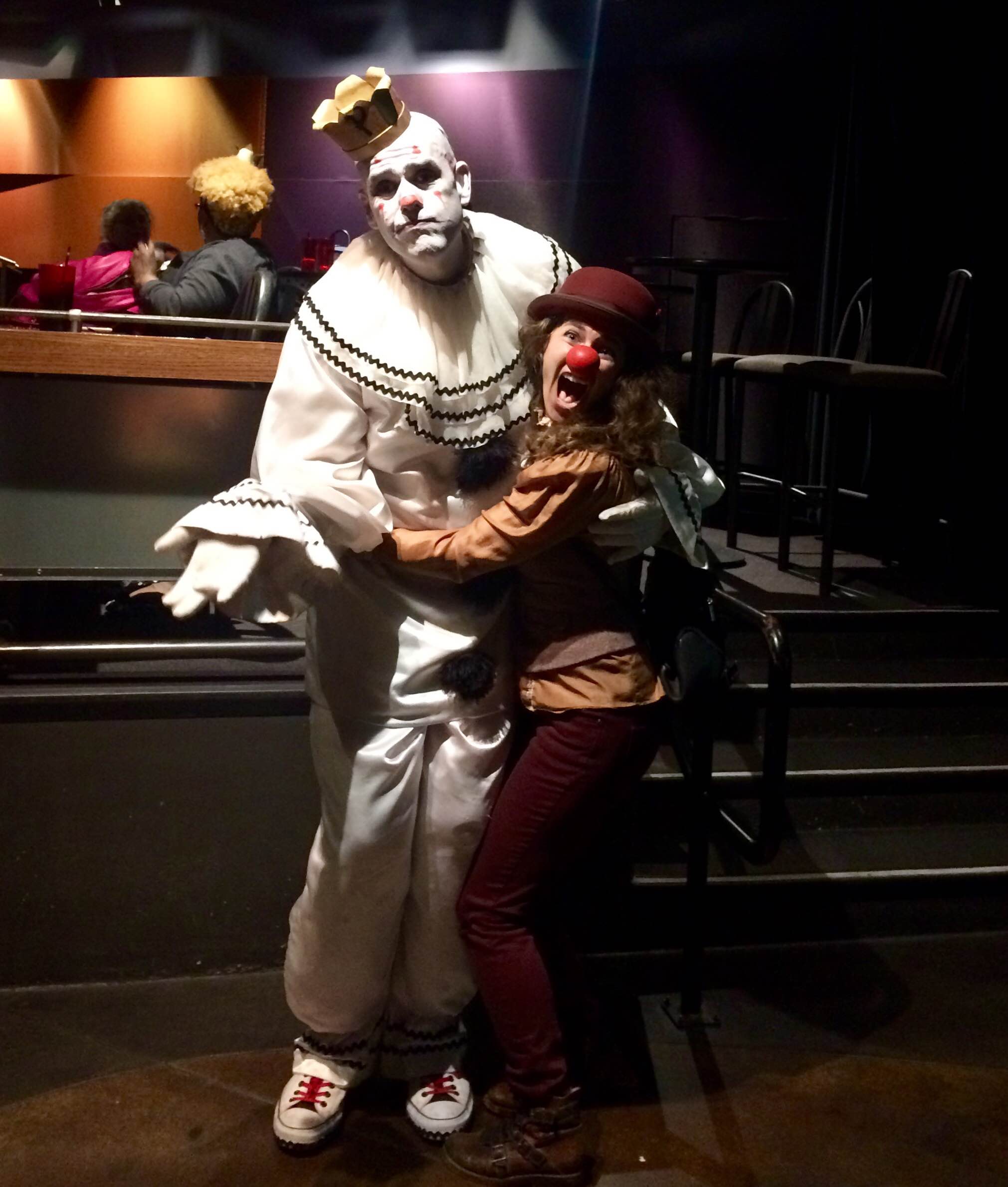 Puddles, reluctantly letting me hug him after the show.

Not only can this clown sing, but he’s also got a legitimately hilarious schtick down. He starts off onstage, sitting on a stool, ignoring the audience, thumbing through a Rolling Stone magazine and casually stuffing his mouth full of gum—like, lots of gum. This becomes a reoccurring joke throughout the show, as he removes the gooey white wad, sticking it to his suitcase while he sings and then popping it back into his mouth later on. Puddles is a silent clown when he’s not belting out “Come Sail Away” by Styx or “Royals” by Lorde or other various original tracks, communicating through sighs, grunts, eye rolls and dramatic gestures. He interacts a lot with the audience, bringing folks up on stage and presenting them with awkward scenarios, instructing them to read from cue cards and having them play air guitar and pretend drums in a pantomime of his backup band (of which there is none, IRL). 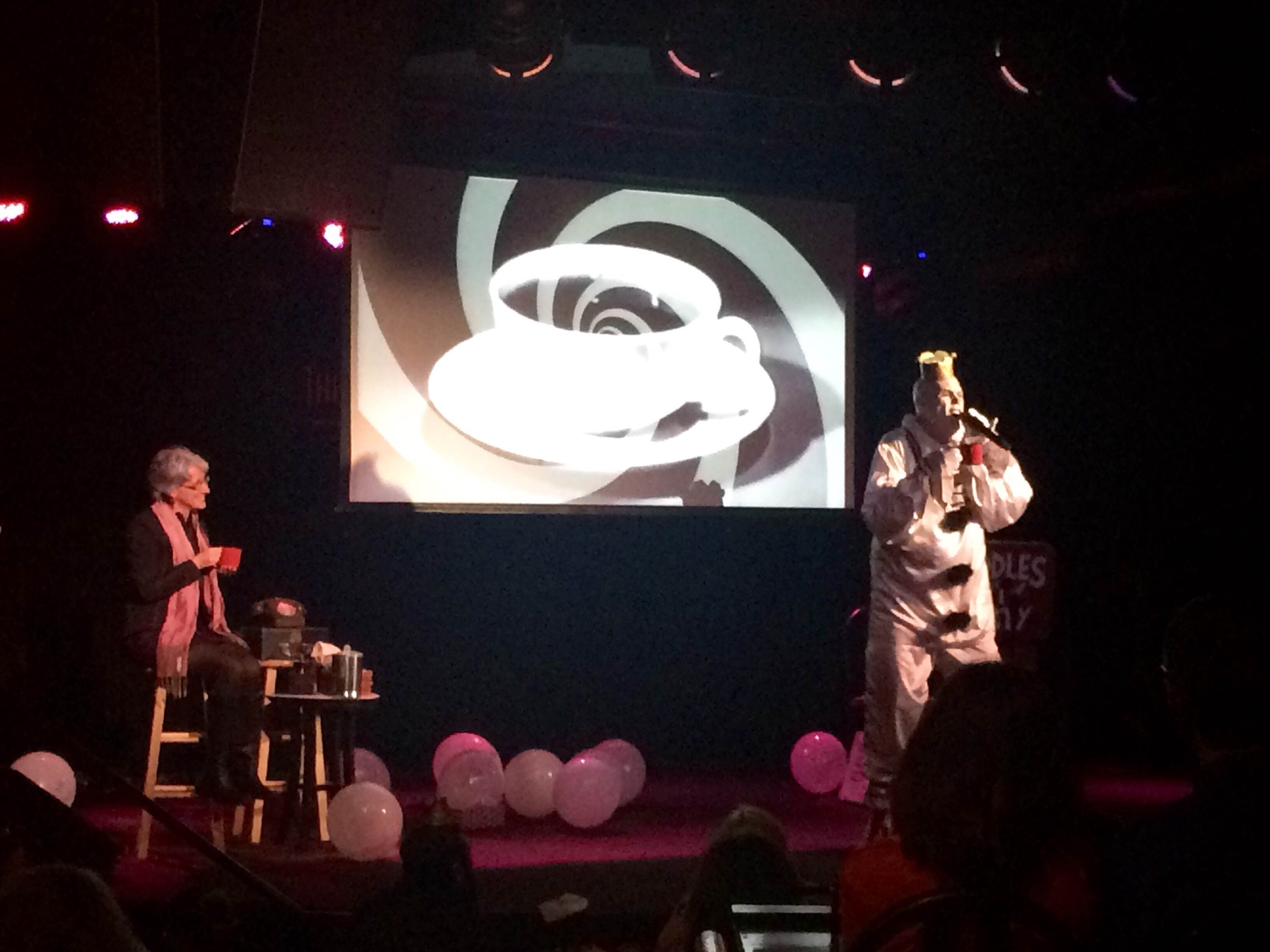 A sad clown was the perfect mascot to symbolize the end-of-election blues we were collectively feeling, and when he opened with a soulful rendition of the “Star Spangled Banner,” unrolling a tiny American flag from out of his frilly sleeve, everyone compliantly stood up and cheered like it was a baseball game. This wasn’t the first time Puddles has sung our national anthem, and surely it won’t be the last, but Friday night’s version may have somehow been the most significant. We needed to hear those words, straight from the mouth of a clown (one in white face paint, not orange).

Puddles paused between songs to goof around, a hybrid bit of strange adult humor and downright weirdness, endearingly miming and pointing, looking fairly glum all throughout. But when he belted out a version of Leonard Cohen’s “Hallelujah” (this is another song that’s part of Puddle’s existing repertoire, but more apropos tonight than ever before), the crowd was enthralled, if not misty eyed.

If a giant sad clown with a deep, commanding voice and a curious sense of humor doesn’t restore your faith in humanity after the recent disappointment and embarrassment that has plagued our broken and divided country, then we truly are doomed. Puddles was a friendly reminder that, beneath all of the hate and bigotry and bullshit that’s bubbled up to the forefront of our cumulative existence, staining every headline and sparking rage across all media platforms, we still live in a country where we can roam freely, finding joy in being quirky and peculiar and silly.

If we took anything away from Puddles Pity Party, it’s to remember not to let the man get you down. If we all stick together and continue to be ourselves, accept each other and love fiercely, we can persevere. And sometimes it takes a giant clown singing covers of popular songs to remind us of that.