Denver-based band Chimney Choir has quite the unique funk to their sound. Having seen them live, I was astounded by their ease in which they wade through both the electronic world and the big band sound reminiscent of nostalgic black and white films. From subtle acoustic whisperings to bangin’ drum journeys, you can discover the taste of Chimney Choir when they perform at the Mercury Cafe in Denver on November 19, 2016. You can grab tickets here. Celebrating their new album (dream), 303 got to talk with vocalist and man of all instruments David Rynhart about this “kaleidoscope” album and their upcoming theatrical showcase.

303 Magazine: How was it creating this new album?

David Rynhart: It was like nothing else we’ve done before because in our history of experimenting in our live shows, we’ve had sequences and things happen that we’ve had to adapt the music to. Which is interesting as a band because we come up with spectacles – like we are live scoring a movie that happens in real time. It’s fun and all these theatrical and musical experiences kind of changed the way we went about writing and recording music, and made us think about doing our album and live show to continue this cinematic experience.

We link everything together and that really influenced the way we put together music. When we came to the table, to have bits of rhythms, chord progressions and musical ideas, we could mix match, put the rhythm of one song on top of another melody. A kaleidoscopic technique.

303: How did you guys all originally come together?

DR: I had been touring with singer songwriters and Kevin [Larkin] had been with the bluegrass band, and we were both wanting something new. I played on a recording of his, then he invited me to tour with him in the south, for no reason. Just to do something different. I was friends with Kris [Drickey] at the time and she came along, just to hang out and not even sing, and while there we asked if she wanted to sing harmony. There was just a good synergy, Kevin moved to Colorado and we decided to make a new project. Started off with the three of us and it grew.

303: What’s one of your favorite songs off (dream)? Can you tell us the story?

DR: Well, when we recorded the album, we went to a cabin in the woods and had two cabins. One, we had our recording stuff set up in and you can’t drive to it, there’s a pond between, and another where we were living in. We were recording “Turning Centuries” and it started to rain a lot – this was down in Colorado Springs in the Black Forest. We noticed the rain and after it stopped, we noticed the pond was rising a lot and we kept looking out and pretty soon, we could see the steps on the cabin disappear.

The water levels were going up really fast and there was no way back over. What was maybe a stream of three feet to cross was now maybe 30 feet to cross. It was a huge river and we had to put our instruments high up and grab laptops and guitars and wade out into a river. We got caught in a flash flood with no way out. We also videoed that whole experience and used a lot of the audio in the song “Turning Centuries.” It wasn’t always that exciting (laughs). 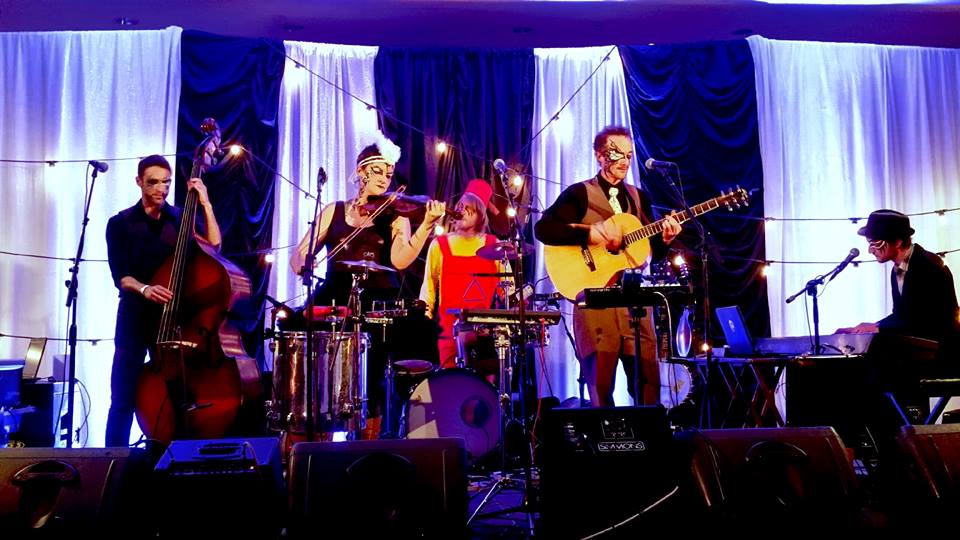 303: I saw you perform at Arise, and I loved how you incorporated instrumental solos with modern electronics. What would you say your musical influences are?

DR: So many different things. The fun thing about this project for us is how it hasn’t been successful in a big way. We aren’t in any kind of box that we have to live up to – it keeps being elastic. Kevin and I came from projects before where it was very much in a box, working with different singers and in order to satisfy the gigs you were doing, you couldn’t just experiment.

This project has been a mix-tape and we wander through life taking what we think is interesting, so there is a huge variety of different things. In the (dream) album, I took some composition techniques from neo-classicism and Arvo Part, a great influence, and we use sampling of Gregorian chant here and there. There’s samples and techniques from all over the place. It’s really fun for us, we use an electronic technique to superimpose [musical parts] on top of one another and go from there instead of having a clear idea from behind. Say, I’ve got this folky song, let’s put it on top of this string arrangement – what’s that going to be like? We would manipulate sounds, percussion sounds are very much homemade from our time together.

303: What can the audience expect from your upcoming release show?

DR: We’ve experimented a lot with – I don’t want to say performance art – but an immersive theatrical experience, or augmented reality. We like to take the experience of a concert and make it four dimensional, so to speak. We are playing with a lot of different forms of visual art and movement, so we have projection and animation. There’s been collaboration that we are excited about. It’s the “dream” album, so we want to create living dream sequences. We have costume characters that’ll appear; there’s gigantic fish puppets – so we get to project this and bring into the audience; there is dance … Nathan Lund and Mara Wiles are comedians with a sketch at the beginning. I think it’s going to be a really good time.

303: You play a variety of instruments, guitar, piano, percussion, vocals – what’s your favorite?

DR: Piano. There’s something about the piano that you could just get lost in it. And I always appreciate that.