Today’s portion of the NFL Kickoff celebration had an even larger turnout than yesterday. Masses of orange and blue filled Civic Center Park. The buzz of excitement could be felt throughout more than just the event, but the entire city. Broncos fans huddled together snapping photos, getting autographs and discussing the game. While a number of Broncos legends were known to be located throughout the park, a particularly special appearance was made at the Tostitos Cantina stage. Welcomed by a very enthusiastic round of applause was Broncos former runningback and all-time leading rusher, Terrell Davis.

Davis spent about 40 minutes on stage reminiscing with a very excited crowd and even laughing along when his host showed the audience a clip of Davis appearing on an episode of Sesame Street in 1998. After Davis exited the stage to a raucous chant of his nickname,”T.D.,” he headed backstage for an exclusive interview with 303 Magazine.

We were able to pick Davis’ brain on tonight’s football game against the Carolina Panthers and wondered what he expected out of the Broncos 2016-2017 season. Here is what he had to say:

The offensive line is a work in progress.

“Do I think they’ve upgraded over last year’s unit? Absolutely, but that’s only on paper right now. We have to see how they gel. We have to see the chemistry and whether there’s going to be some changing along the line as the season goes along,” he said.

The team has two new players on the left and right tackle spots — Russell Okung and Donald Stephenson. Davis said that the key is to see how the two of them work as a unit. “They’re playing in their first regular season game together and most people are looking at the skill positions but I’m looking at that unit,” he said. This is so important, Davis explained, because the Broncos have a young, inexperienced quarterback who will rely heavily on the offensive line.

“The offensive line has to be able to buy him time so he can find receivers. He has to deal with trying to find receivers and at the same time having to worry about a rush. That’s difficult,” Davis said. Davis, who was a crucial component to the Broncos offense while he was on the team, told us a team’s offensive line always has a very interesting dynamic. 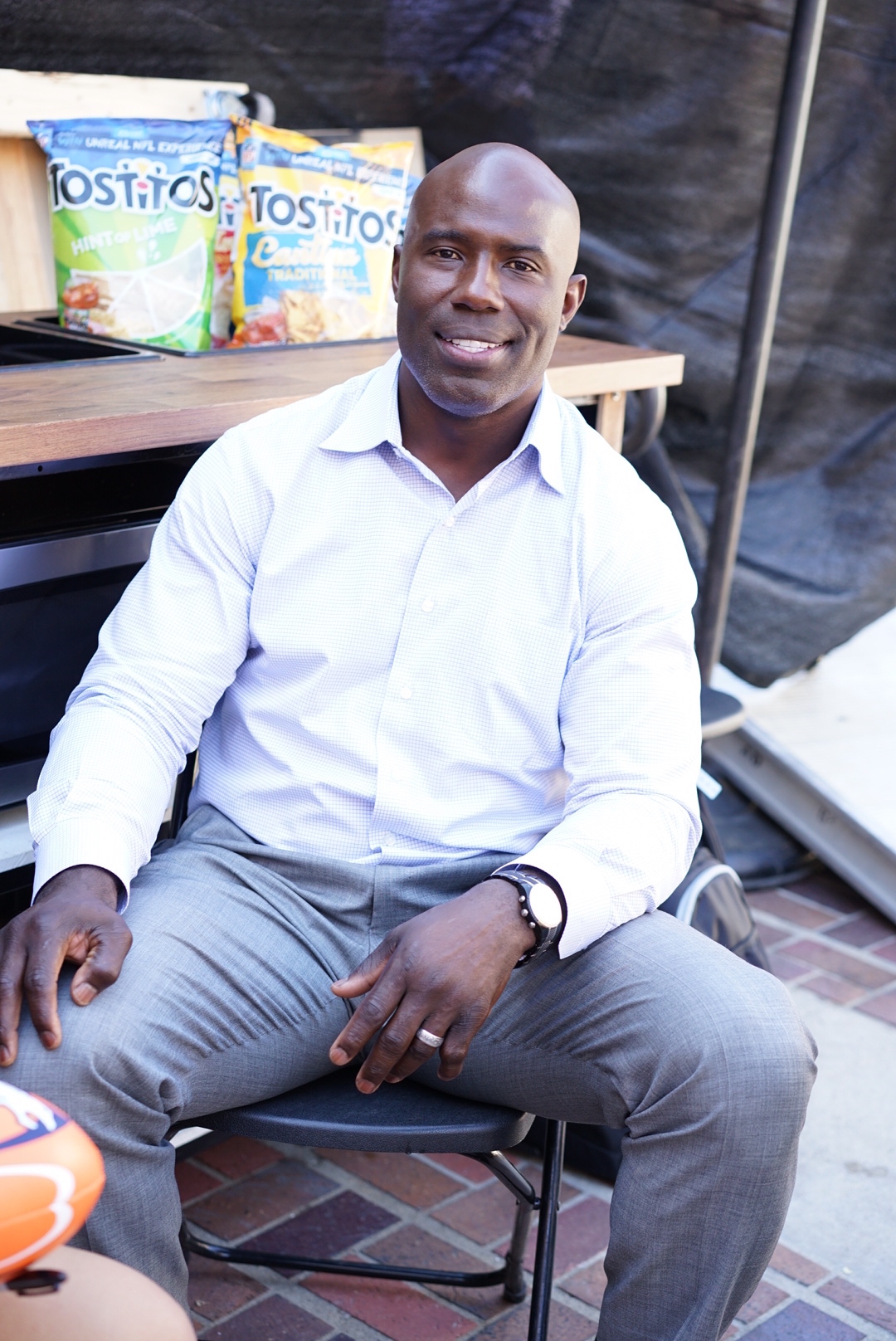 He would know. Davis was, some say, one of the main reasons the Broncos won back-to-back Super Bowls in ’98 and ’99. “It’s easy to get to the top; it’s hard to stay there,” he said. Davis explained that there are a lot of contributing factors to winning a Super Bowl, and they’re not typically the same every year. “Sometimes your teams change. You don’t have the same players on the team because of free agents,” Davis said. He also mentioned that injuries and changes on other teams play a big part in it as well.

“Every week it feels different. It feels like [the other team] [is] measuring their success based off their game against you. So it feels like play-off games every single week. You can play some teams where the records don’t indicate how well they’re going to do against you,” Davis admitted. You just never know. To put it honestly, Davis said, “It’s just hard to stay that good for that long, you know?”

Gary Kubiak is an amazing coach.

What was it like playing under Coach Kubiak? “He was awesome. You see me smiling when I mention his name,” Davis said, chuckling. According to Davis, he just has a way of connecting with his players. “I think part of it is he understands people. He doesn’t come in there with the idea that, ‘I have a system and you have to fit into my system.’ He has an idea of a system but then once you come in there, he’s like, ‘okay let’s see how I can tweak the system to fit what you do well,'” said Davis.

Coach Kubiak doesn’t just sound like a great coach, but a good person and a strong mentor. “His demeanor is one that you love. He doesn’t get real high; he doesn’t get real low; he doesn’t just lose it if things don’t go right. He’s more of a teacher than he is a coach… but he’s firm. He’ll tell you the truth and be honest with you. He won’t sit there and sugarcoat anything,” Davis said. He had nothing but praise for his former coach. What does Kubiak have that other coaches don’t? Well, it’s hard to put into words. “He knows his stuff… He’s just got it,” Davis tried to explain.

We can expect big things from CJ Anderson.

“Typically the later part of the season is where [CJ Anderson] starts to get stronger, but if you look at the sort of attempts he gets, he doesn’t get a lot of attempts and they’re very inconsistent throughout the year,” Davis said, but “I think that this is the first year that CJ will see consistent carries.” This is good news for all Fantasy Football enthusiasts out there.

“He’s had some nagging injuries. He’s got that ankle and whatnot, but he seems to be healthy this year. He’s lost some weight [and] I expect CJ to have a big year; I really do,” he said. Speaking of Fantasy Football, Davis admitted this is the first year he himself is playing. “It’s interesting. I’ve got my team all set up right now. I’ll probably drop  some people before the start though… I’m not real happy with the guys that I’m drafting. Not for this match up,” Davis said laughing.

The Broncos are a family, win or lose.

Despite being off the field for a number of years, Davis said he is without a doubt still part of the team. “It’s one of the few teams that when you come back you feel like it is a family,” he said. He was stoked when they came out on top in the Super Bowl last year. “I didn’t play on this team, but when they won it, I felt like I won it. I was around the team and I came in and did their speech for their ring ceremony and they make you part of it. So when we look at it, it’s the Broncos who won the Super Bowl, not the 2015 Broncos. It’s the Broncos family who won it. As a matter of fact, I believe they should give me a Super Bowl ring, that’s how big of a family we are,” he said jokingly.

Tonight will be a close game

He wouldn’t disclose who he believes will ultimately win, but while he did say the Broncos stand a good chance, he reminded us not to underestimate the Panthers. “This is going to be a defensive battle,” he said. “Carolina, there’s no mystery about that team… Cam’s going to bring his stuff and their front center is about as good as you get in the NFL.” However, he did assure us tonight will be a good game.

Now get the nachos out and your game face on. Go Broncos! 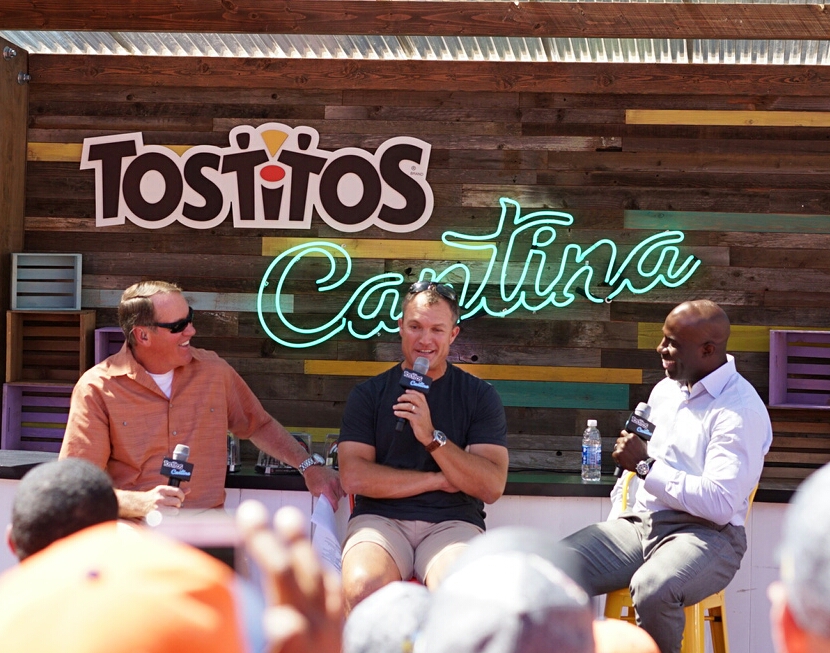