303 Style Profile – Joshua and Kayleen Harvey of The Sneerwell

Denver is known for being a small big city (although that title is quickly being subverted with the hordes of new residents) and an advantage that comes with our setting is community and getting to know local faces. A few months back, I wrote a piece on Threepence Motorcycle Shop, a place that is bike shop, a custom helmet-rack space and mini boutique. I asked how their logo came about and Wesley Case said “my friends over at The Sneerwell made it” and I made a mental note to seek out the couple behind the memorable work of art. As I came to discover, Joshua and Kayleen Harvey are a distinctive duo who make custom flasks, have a killer sense of Tim Burton-esque style, and are all around a very interesting pair to know. The former touring musician for Gungor and his talented wife gave us a peek behind the curtain of The Sneerwell and told us all about the flasks that are becoming part of Denver’s backdrop. 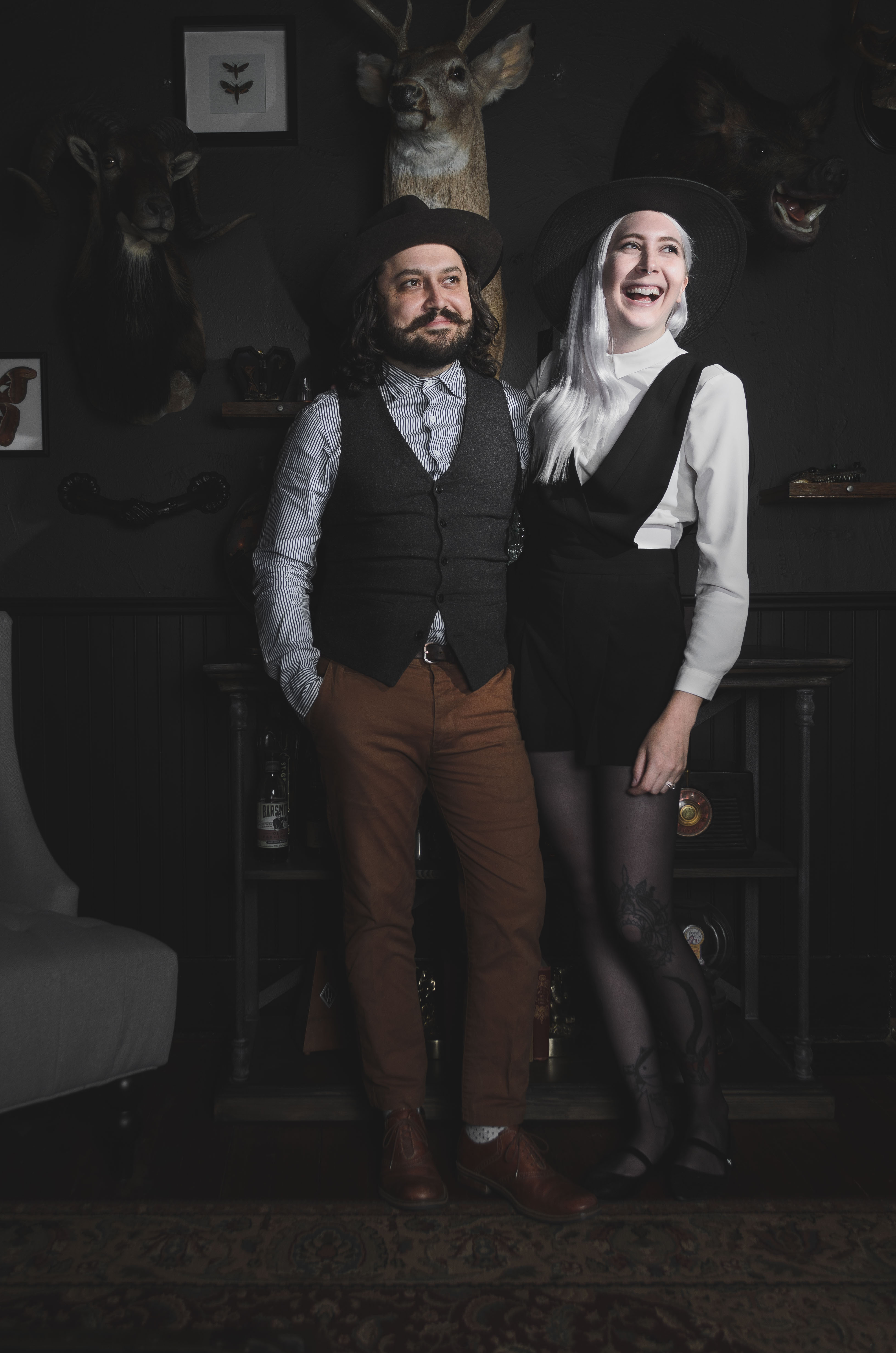 303: How did The Sneerwell get started? Why flasks?

Joshua Harvey: My dad started drinking whiskey with me when I was younger and he gave me a flask when I was 18. Something about that really spoke to me, carrying this timeless vessel that was symbolic of what my dad I would share. So when I stopped touring, I needed to find something to divert my energies into. Before I joined [Gungor] I was a glass etcher for homes and business, and I took that knowledge and incorporated it into metal. So I took something that was meaningful to me, combined it with an artistic ability and resulted with custom flasks. I made one for my touring manager while I was still in the band and he loved it, and other people saw it and wanted one as well. When we started The Sneerwell we weren’t planning on that being our full-time jobs but it slowly became that. Kayleen joined right when we decided to make it an official brand and began helping me with production, brainstorming, decisions, the ins and outs, and made things a lot easier because she’s more efficient. Her abilities helped me focus on my portion of the brand and she could carry the weight of the other half.

Kayleen Harvey: Everything happened pretty quickly. I was cleaning houses before we got married and working at my dad’s jewelry store in Parker and then after marriage we started working full-time on The Sneerwell together. Once we decided this is what we wanted to do, it was really easy to move forward because it was two people doing it rather than just one of us. We’re like-minded already so it works. Everybody was pushing for an Etsy shop but as great as Etsy is, we didn’t think it felt right for the mood of The Sneerwell. We’re running the risk of not making as much money by doing that but we wanted to be taken seriously and for us particularly we felt like it was a risk worth taking.

303: Where did the name “The Sneerwell” come from?

JH: “Balthazar the Sneerwell” was a moniker I had when I was on tour. It was this sort of an eccentric British character I would do when we were bored on the bus. It was very similar to Lyle on Penny Dreadful. When it came time to name the company, it fit the tone of our product well. 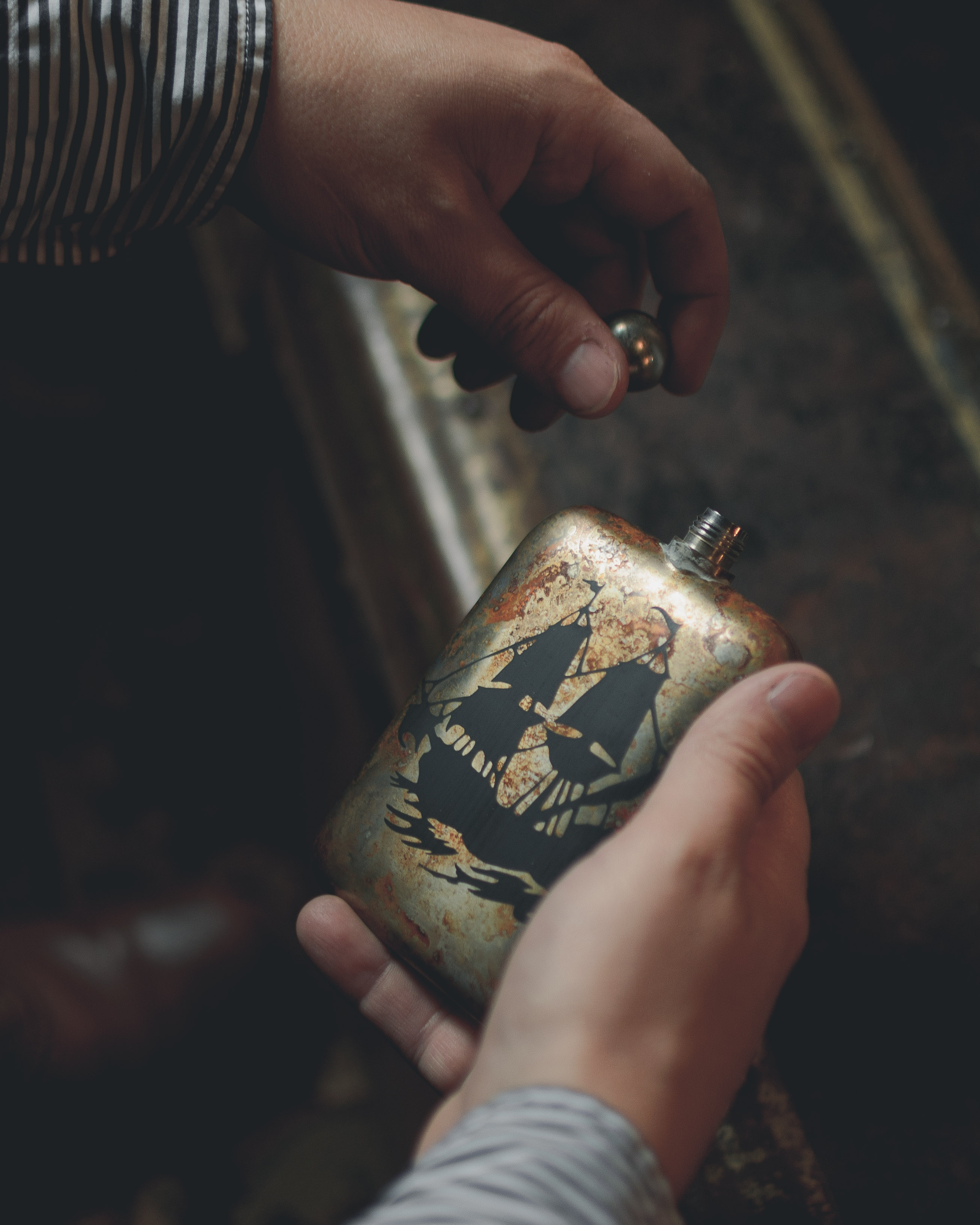 303: Tell me about your personal style. Is there anything specific you’re drawn to?

JH: I think menswear can be tough. Thinking outside of the box for me typically involves thrift or some manner of second-hand clothing. It’s not even from a money standpoint but simply because I’m not interested in some of the clothes that are trending. It’s not out of arrogance either, it just doesn’t speak to me. So much of fashion is non-verbal, so much of interaction is non-verbal. Clothing can be a herald of sorts and go ahead of you in a conversation before anything is even said, and people can make deductions of what it is you’re about, what it is you’re up to, what you consider important just from the way you dress yourself. For better or for worse, it’s part of social interaction.

KH: There are brands I like but more than anything, if I see something I really like I go for it. That’s what my style is. I would agree with Joshua on the limited options for menswear, we walked into a store the other day to see that the men’s section was a corner while for women the options seemed endless. If I could dress like the characters from Penny Dreadful on a daily basis, I would.

JH: The majority of our customers come from the motorcycle community and we wholesale to The Selvedge Yard, Iron and Resin, and various other motorcycle companies that we’re very fond of because it’s a really cool culture. We’re also in Asrai Garden, which is this great floral shop in Chicago. Currently, we’re in about 40 stores in the states and we’re in talks with a couple of stores outside of the country.

KH: We also sell in the The Stanley Hotel‘s gift shop. One day we walked in because we just had to visit the famous place and after we walked out of the gift shop I said “we should ask them if they want to carry us.” That was the first time we really started seeking out shops that we like, I thought “why not? They might love us.” So we went back in and showed them our Instagram, they liked it, and now they carry our flasks. We love how creepy the place is. 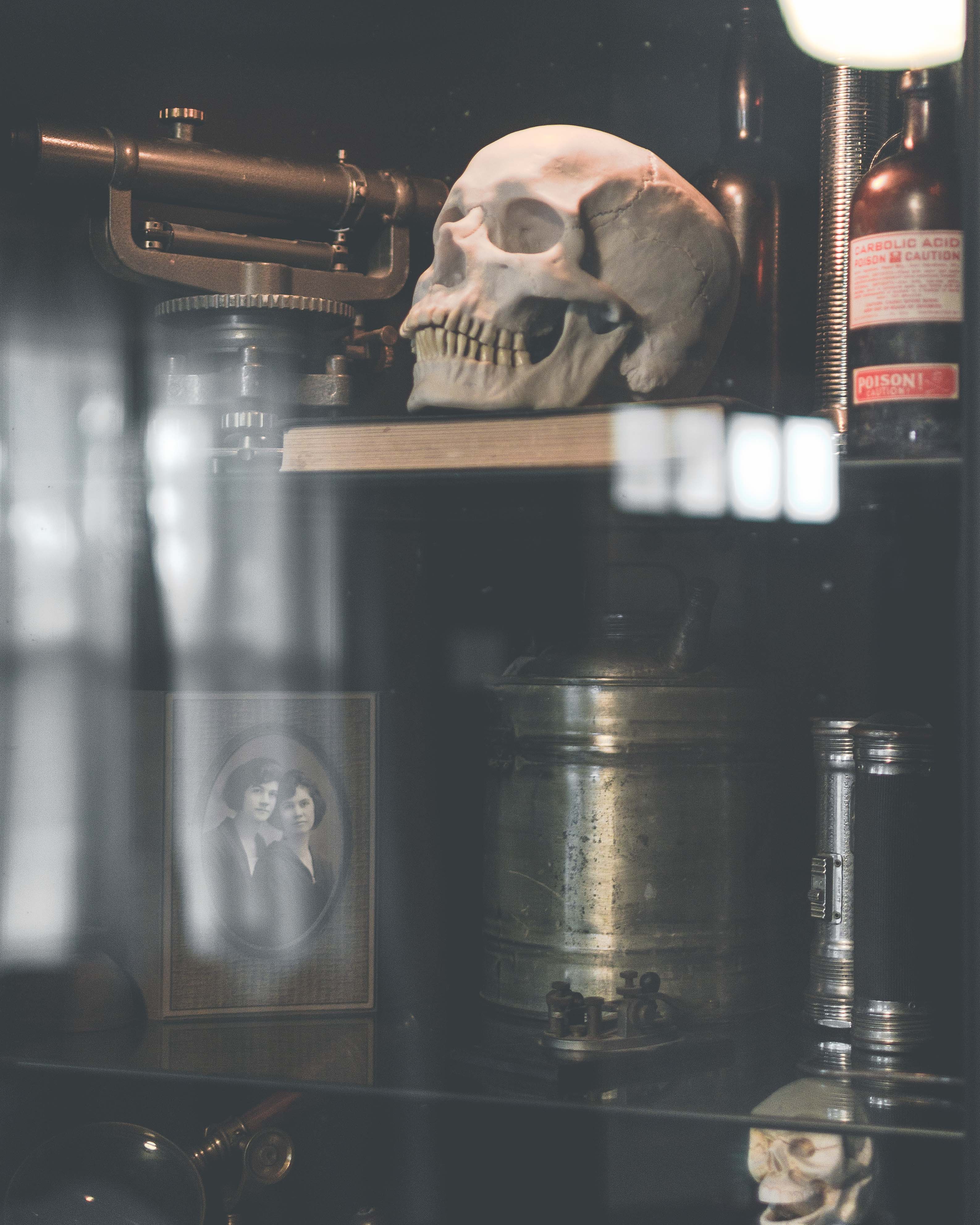 Gothic decor at the Harvey residence.

303: Joshua makes all the illustration on the flasks. Where did you learn and what sort of things do you illustrate?

JH: I’m an only child and with that came a lack of places and people to expend my energy with, so I always sought out arts that were self-sustaining and that I could do by myself. It’s a tale as old as time but I was never good at group things like sports, hiking, etc. Art always came naturally for me because I was always by myself. Originally, I wanted to become a comic-book artist when I was a kid, so it started with that, and then it’s gone through several changes over the years: I was a muralist, I was a glass-etch artist. When it came time to etch flasks, our process involves a very traditional way that forces the illustrations to be simple. It’s an old-school, turn of the century, hand-drawn type of illustration. So whether we want to or not, they have to be simple, and inadvertently, we made a certain style of art that works for our brand.

JH: I would say either the The Eye of Providence or The Hell Hound. I like anything and everything spooky, so all the spookier items we have are my favorite.

KH: I think The Hell Hound, Salty Old Bastard because it’s so cheeky, and The Leather Mouse. 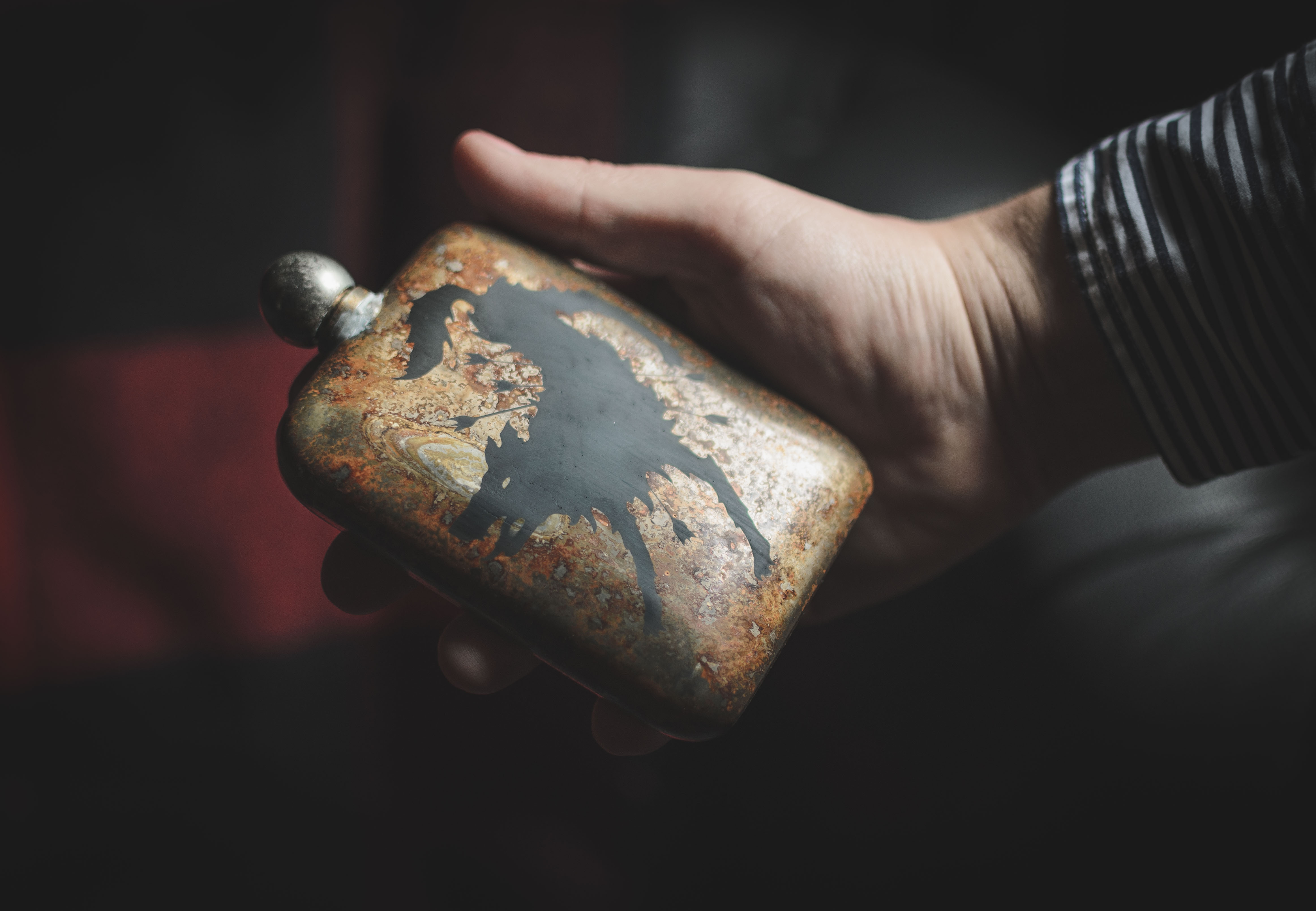 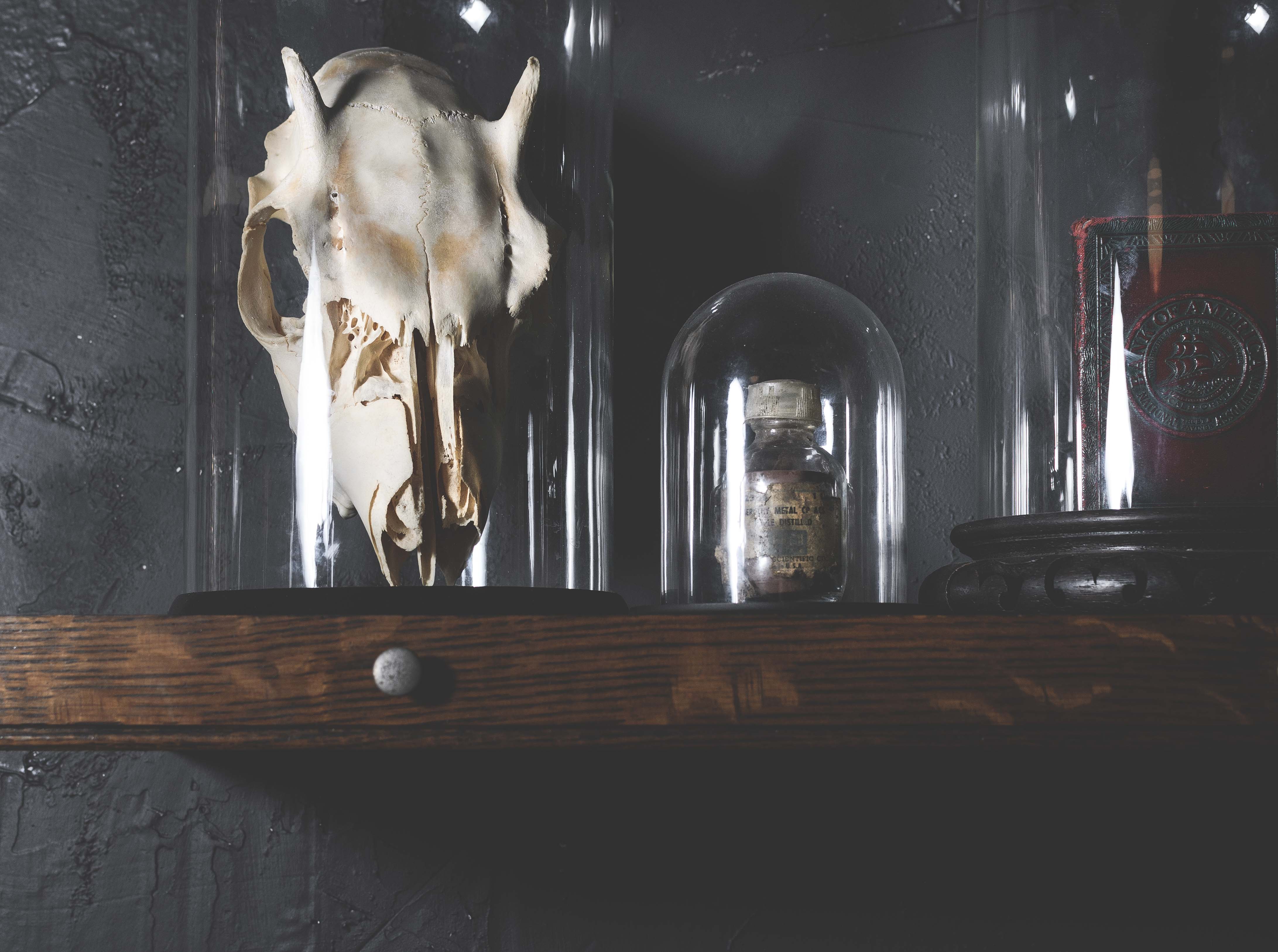 303: Your website offers two styles of flasks. What’s the difference between a Noble flask and a Perdition flask?

KH: At it’s simplest, the noble flasks are the ones made to look like antiques, something you’d find in your great-grandpa’s toolbox. The perdition flasks are the full, black ones. But the process is totally different.

303: Are there plans to sell apparel from The Sneerwell? Are there any other future endeavors?

KH: We have sold t-shirts, tank tops, and a few sweatshirts with our logo but we’re currently sold out. We’ve been looking into opening a storefront. It might be under the name The Sneerwell or it might be a different name, but we wouldn’t want to have a store with just flasks in it so we’re thinking of including other merchandise, other oddities, curiosity stuff. We want to be one of those destinations that if you’re going to Denver you have to stop at this shop because it’s so different and unique.

JH: There are plans to eventually expand the brand into other avenues, including the retail space, and some of it we’re keeping under wraps. We have plans for certain products if we do go that route, very specific things that you normally wouldn’t be able to get your hands on in Denver. We’re very secretive, not because we think that our ideas are so incredibly singular that they need to be guarded, but because we’re trying to do something that 85% of the creative community isn’t up to. So when we have a certain idea or process, we tend to keep it to ourselves. The storefront would be a small niche, which is the point. We’re not solely interested in making money, we want to feel fulfilled. It’s going to be small, humble, and hopefully unique.

If you’re eager to get your hands on one of these lovely flasks for gift giving, for moody and classy décor, or simply for personal use, visit The Sneerwell. And remember to keep an eye out for Joshua and Kayleen Harvey as they continue to color Denver’s culture with their talents. 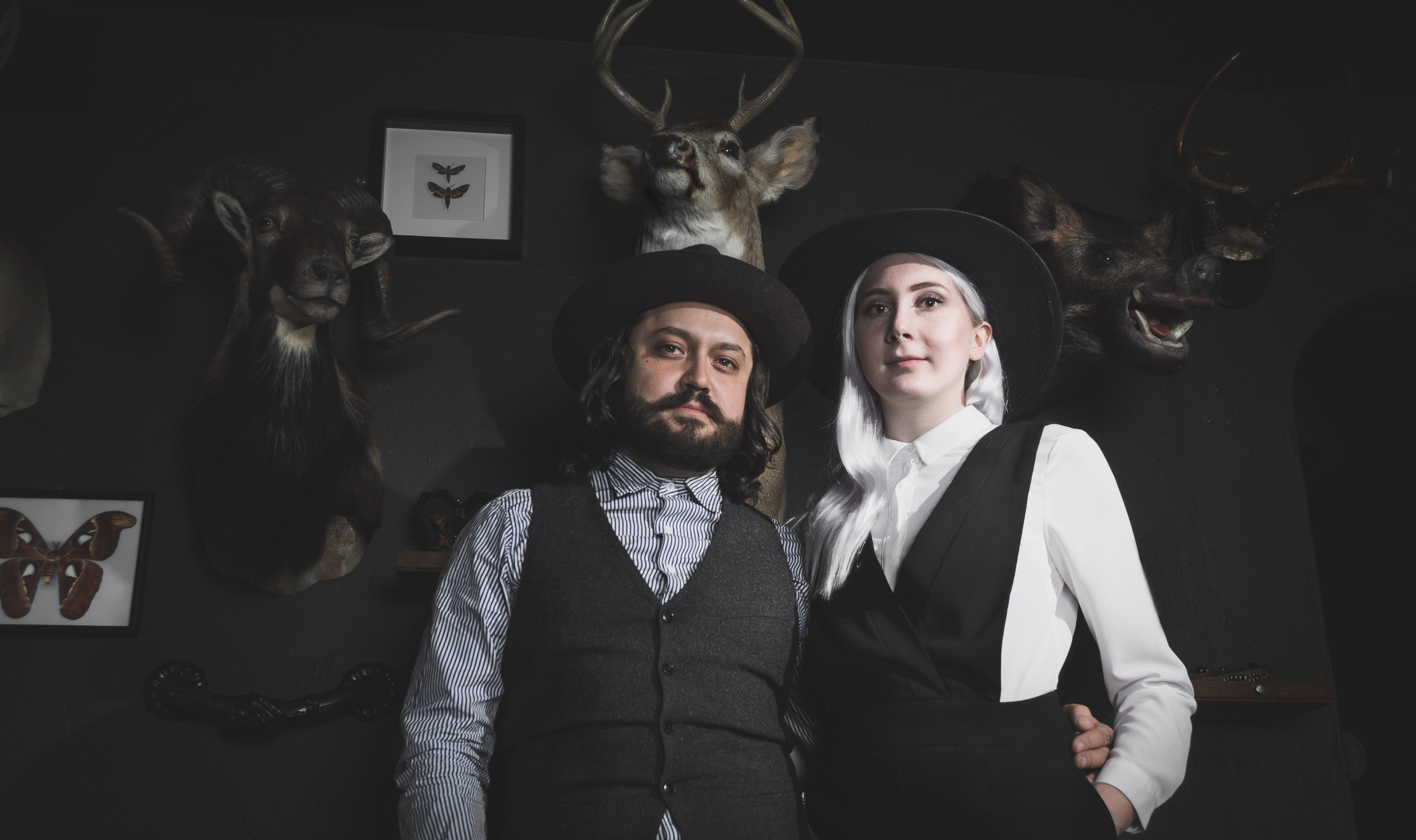