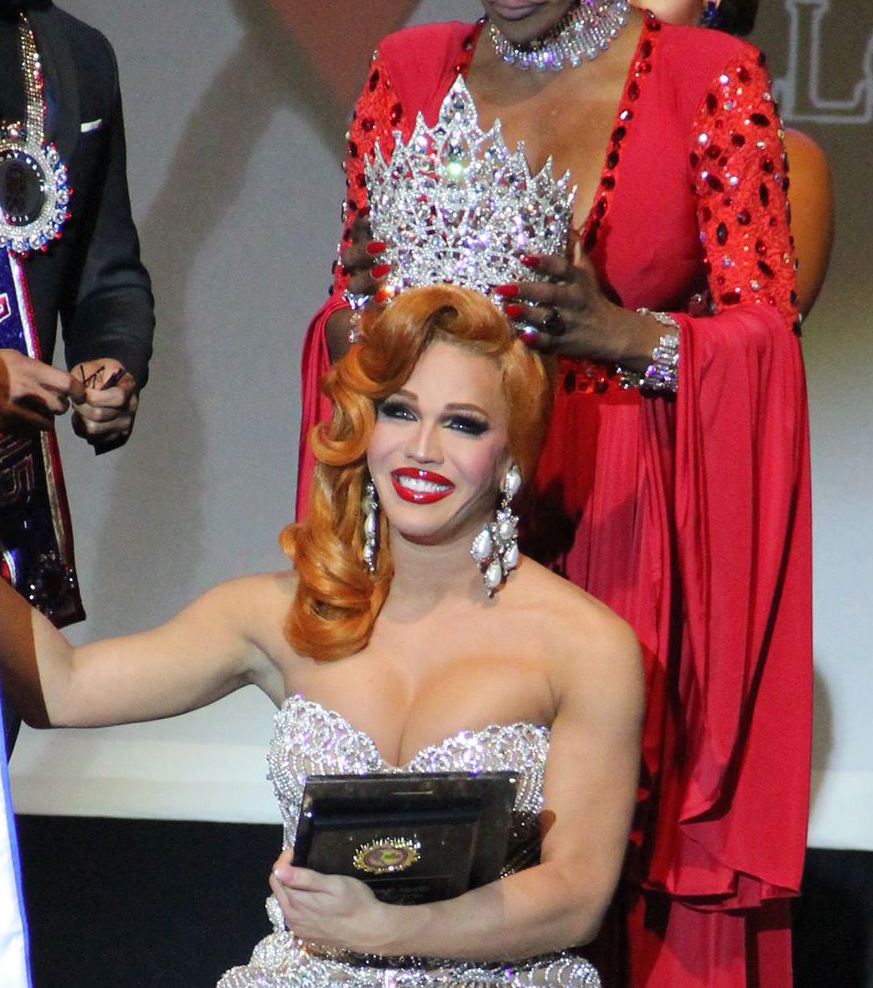 This past May, a new Miss Gay USofA was crowned and she is a Denver native. Her name is Aurora Sexton, and seeing and hearing from her, it’s no surprise she’s royalty. While she may have moved to Nashville five years ago, she still holds a special place in her heart for Colorado. She was in town to visit family at the end of June and was kind enough to sit down with 303 Magazine to discuss her style, her crown and how she plans to represent the title. She is back in town this week to perform in Drag Nation at Tracks Denver on Friday, August 26.

303 Magazine: Tell us about the pageant and what the experience of it is like.

Aurora Sexton: Miss Gay USofA has been in existence for 31 years. It’s weird because I used to watch these tapes a decade ago and it was something that I wanted to do so badly, but I kind of let go and gave it up because I wanted my life to go in this direction. I wanted to work as an actress in film and television for a long time and now I’m moving into that realm. I have a manager and an agent. Now the opportunities are there. I got talked into doing the pageant one last time, and I’m really glad I did it. I’m really glad I made the decision to compete. I certainly didn’t think I was going to win the way I did. I ended up winning every category with a 32-point lead, which I don’t think was ever done before. So that was kind of exciting.

It’s a great experience. I mean, it’s intense and stressful, obviously, but it’s a great place to network, make a name for yourself and get your art out there to a national audience. I love the experience of it.

303: Where do you get inspiration for your looks?

AS: I get inspired from everything. I obviously follow a lot of actresses and models, like I did the Evil Queen this year for talent. I love Charlize Theron and I’ve always had a thing for Disney witches, so it was kind of an homage to that character. But also fashion magazines – I have a lot of friends that work for the industry. I just pull from everything. 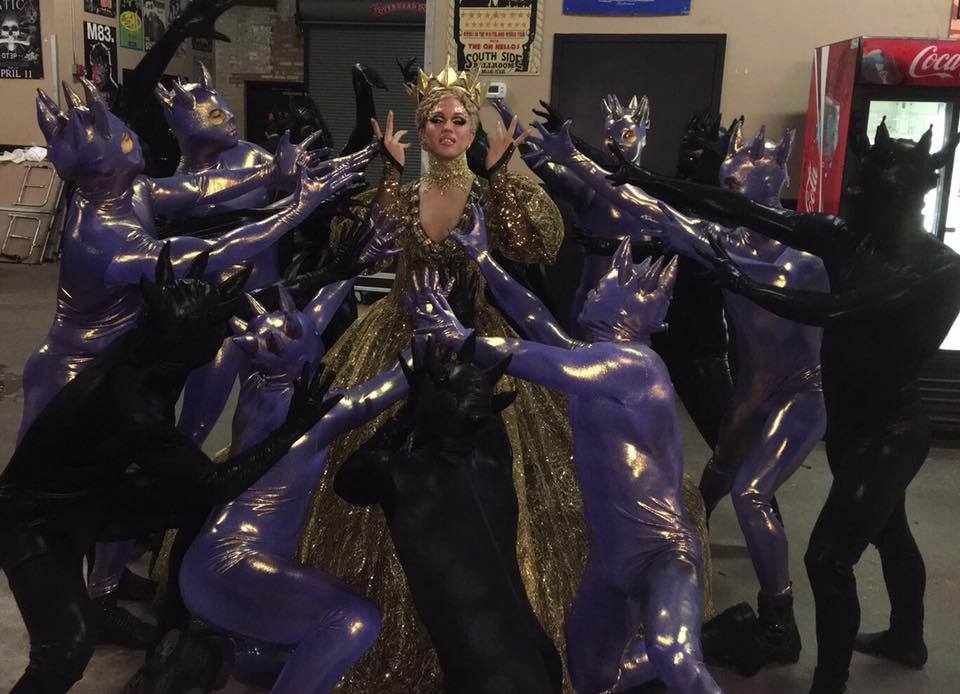 AS: Most of them I do. When I’m in competitions, I’d rather pay other people to do it, just because you’ve got to keep focused. There [are] so many moving parts. For Miss USofA, I was dealing with about 50 people that were all working for me to make everything possible, so it’s easier when you’re not stuck at a sewing machine and trying to delegate. For USofA, my choreography was by Rolly VillaVerde, all of my costumes were made by Troy Cossantino and all of my gowns were by John David Martin.

AS: I think as far as celebrities are concerned, I would say Charlize Theron, Lena Headey, Meryl Streep – actresses that aren’t afraid to be ugly or take on roles that are way out there because I’ve never been afraid of making myself ugly or be funny or silly or stupid. While I take what I do seriously, I don’t take myself that seriously. I love actresses that do that. But I also like actresses that have managed to open doors for women like myself, that they know how to balance their celebrity with advocacy and they do something with it.

There are other leaders like Precious Davis, she’s a girlfriend of mine. She’s the one who got me involved in a lot of the activist organizations. I think, in general, just other people that have come before me that have made my life easier and possible – and that’s why I feel as Miss USofA, it’s my responsibility to try and make things a little better for people that come after me.

It’s not just about going to the bar, doing three songs and calling it a night, I want to make a difference that matters and I want to do things beyond this. 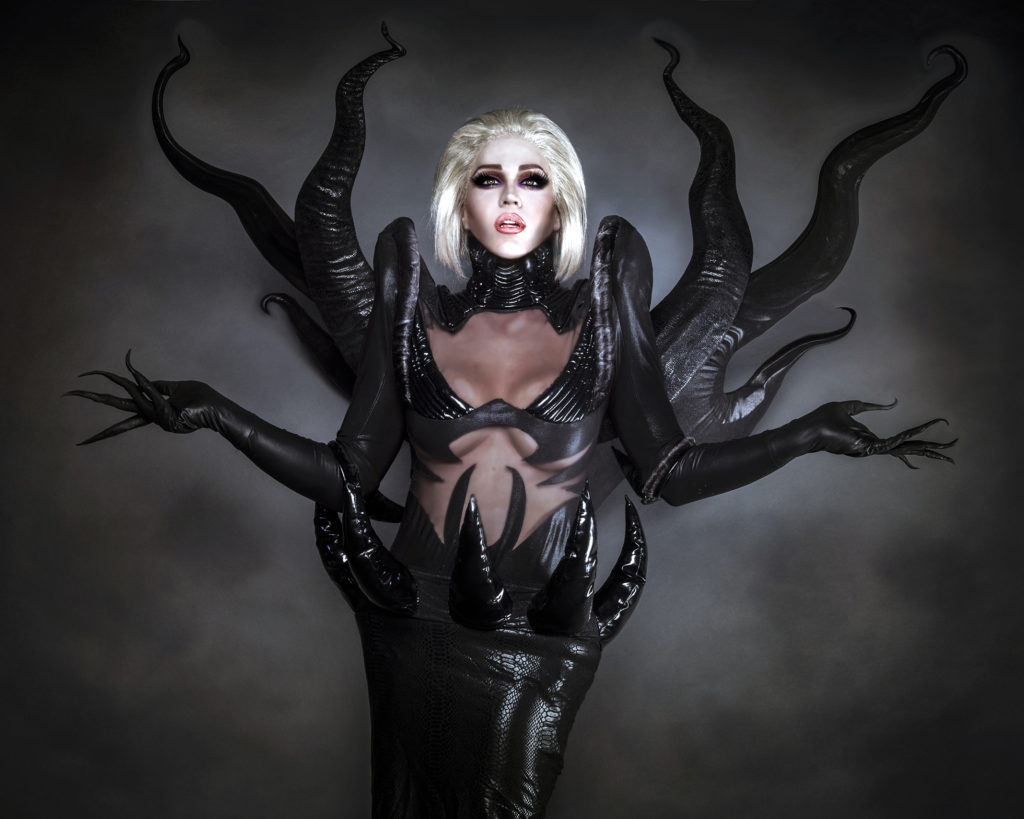 303: What are your responsibilities as Miss Gay USofA?

AS: The requirements of Miss Gay USofA is to travel to all the state prelims and crown all the winners that come together at the end of the year for nationals, and then the next winner. There’s booking throughout the year and appearances, and selling prelim tickets to make the system bigger. We’re going to have Colorado USofA here this year. I don’t know the exact date yet, but that is happening. I’m very happy to bring that back home.

But I think that when you’re in a position like this, it’s your responsibility to use it for something good–something better–so I’m actually taking things many steps further than they’re used to.

This year on the road I’m working for Moovz Official, which is an LGBT organization that started as a phone app, but now we’ve worked it into a blog site, and it connects people across the globe. It started in Tel Aviv, Israel, geared toward communities where it wasn’t safe to be LGBT or open. 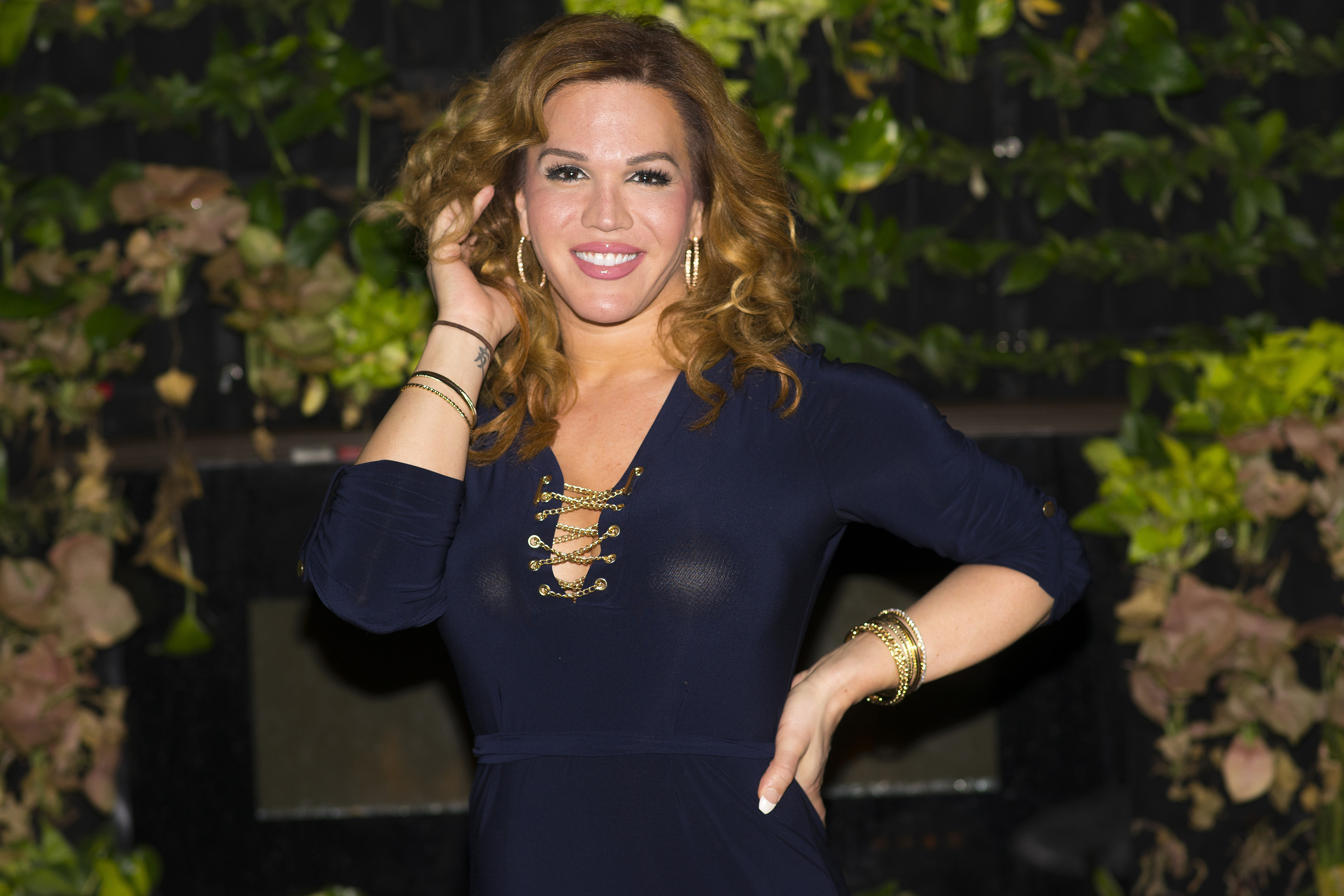 A friend of mine took over their West Coast division and brought me on board as the trans community editor. So now I do a lot of activist work – I bring attention to a lot of political causes and I want to use the USofA title to continue that with a documentary series blog called “On the Road with Miss USofA.” Every city and state that I travel to, I will be recording everything that goes on – what’s fun around town, what’s good to eat, but also if there’s things I can highlight or bring attention to, like LGBT shelters for homeless youth, or if there’s charities or fundraisers or anti-gay legislation going through their state house – anything that I can bring attention to, I want to.

303: You’ve been doing a lot of fundraisers for Pulse Orlando following the shootings in June.

AS: Yes. There’s a lot of money coming in for the victims, but all of that money is going to the families of those that passed or were shot to pay the bills. All the fundraisers we’ve been doing have been for the staff. Obviously they’re displaced, out of work and incredibly traumatized right now, and they really need all the help they can get.Working in the nightlife industry for so long, I know how it is to sometimes live paycheck to paycheck. Not all of us get health insurance or 401Ks or anything like that.

The shooting happened on Sunday. On Tuesday, my girlfriend from New York called me and said that they were flying down to help raise money for the employees and the victims, and if I would come. I called the owner of the pageant to help get me there, along with my friend Arnold Mint, and five of us flew in and helped raised $77,000 that night. The next night, I was at Parliament House and we raised another $5,000. So we’re doing a lot. But it was definitely a life-changing experience. I had people coming up to me just in tears – just hugging me saying, ‘Thank you for being here. You don’t know what it means that you’re here.’ I think when you hold a title like this that people look up to you as something good and you should use it for a good thing. 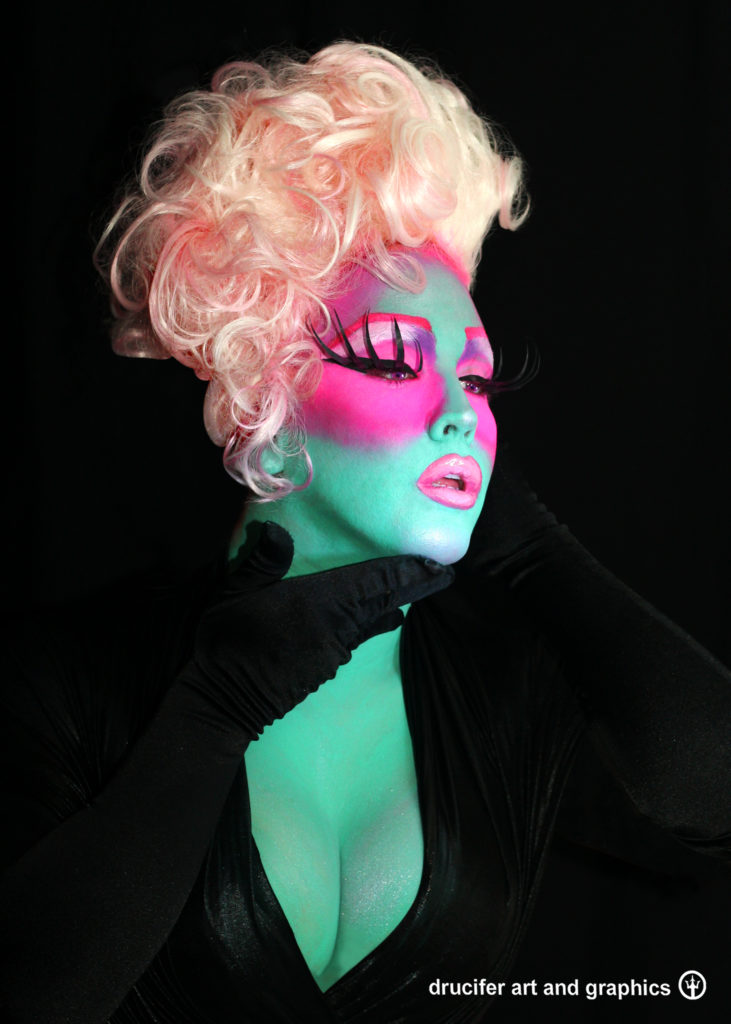 303: Do you think that the shooting changed your plan for being Miss Gay USofA?

AS: I think it focused it a little more, because even before all of this I had plans to do things on tour as Miss Gay USofA. I’m happy to see people get involved. I’m happy to see people woken up and, as horrible as this tragedy is, one good thing–if you can call it that–is the community coming together. So all the cattiness and the bitchiness, the sexism, the ageism, and that shit that goes on in our community–we’re now together in one united fight and I hope it can stay that way as long as it can.

It really sickened me to see a lot of these Republican elected officials going on TV saying how sorry they were. I’m like, ‘No, you’re not. You’re not sorry, because the things that you say on a daily basis about people like me is what leads to this. When you pound into peoples’ heads over and over that LGBT people are wicked, sinners and pedophiles or molesters, your followers and your base is going to start to believe that. People who believe that, they develop such a passionate hate for people they don’t even know. And what does hate lead to? It leads to violence.’

They’ve tried so hard to whitewash the fact that it happened in a gay club to gay people. It’s honestly a really scary time right now. When you look out and see what’s happening and you see how people are talking and how they are okay with being openly racist, openly homophobic – they wear it with pride. And we have to combat that with education and with love and treating each other respectfully like human beings.

To see Sexton’s activism in action, check out her #ID2P video for Moovz Official here. And be sure to check out her mother, Kiera Sexton.