Off the Menu – Six Messages and Memories Hidden inside Table 6 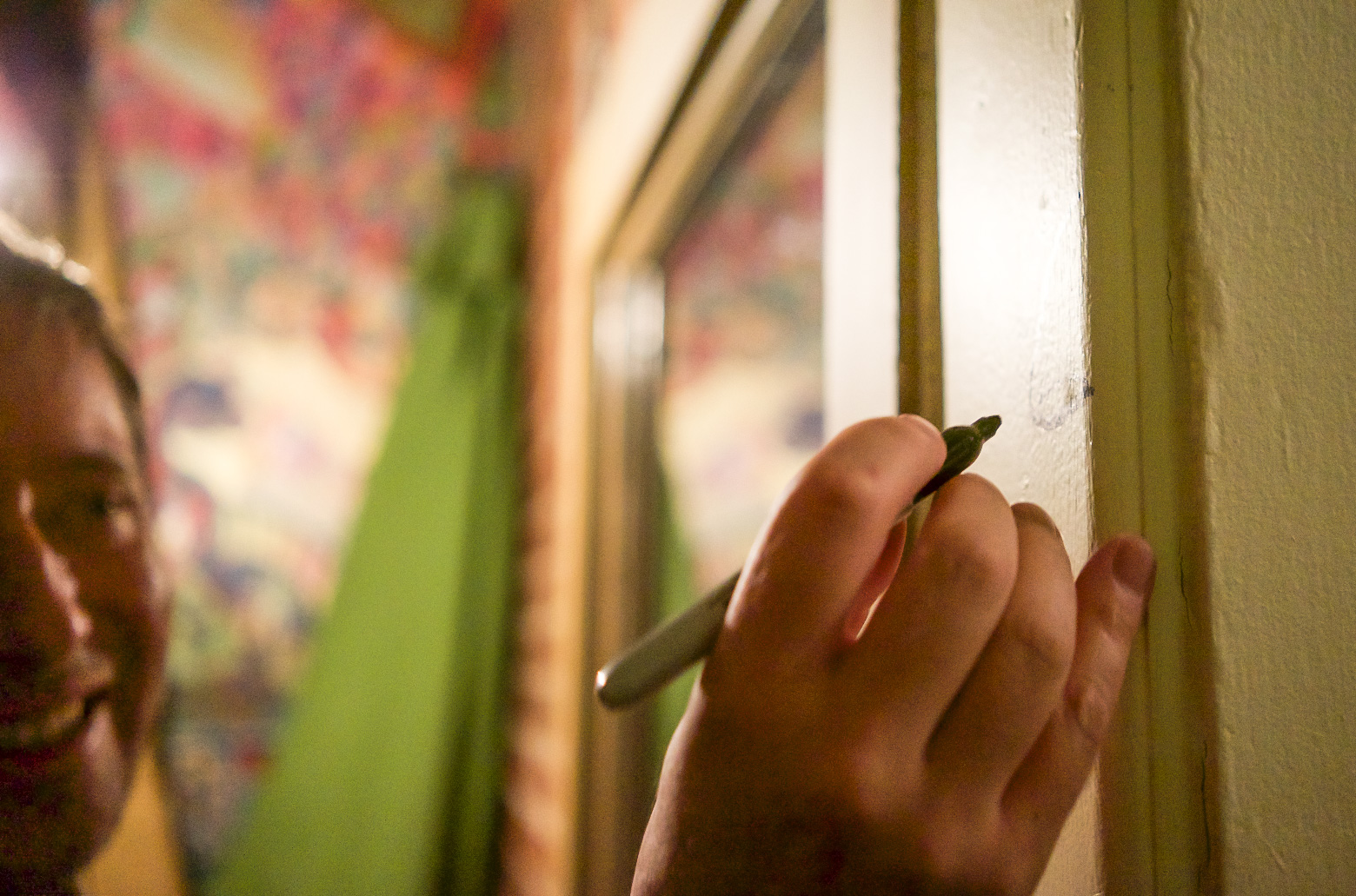 Aaron Forman and his Sharpie at Table 6. All photography by Brittany Werges.

Aaron Forman, owner of Table 6, likes to carry around a Sharpie. But instead of crossing out menu items and making changes to reservation lists, Forman often uses it to draw on the walls of his award-winning restaurant.

“I think there’s something very freeing about [it]. Like, ‘yeah I’m gonna write on the wall with a Sharpie. I’m grown and I’m gonna do that. It’s cool,'” said Forman.

But for the former dog musher turned sommelier, it’s not just about how he’s carved out a sense of freedom in the otherwise stuffy world of fine dining (something he’s managed to do, and do well). It’s how he signifies home.

Recently, Forman took us around Table 6 and showed us some of his favorite hidden messages and memories he’s scattered throughout the restaurant. Some of them were left in plain sight, others are covered from public view and many were kept off-the-record. But the ones listed below all give a special insight into how this 13-year-old restaurant is not just a business, but a place where people like Forman can call home. 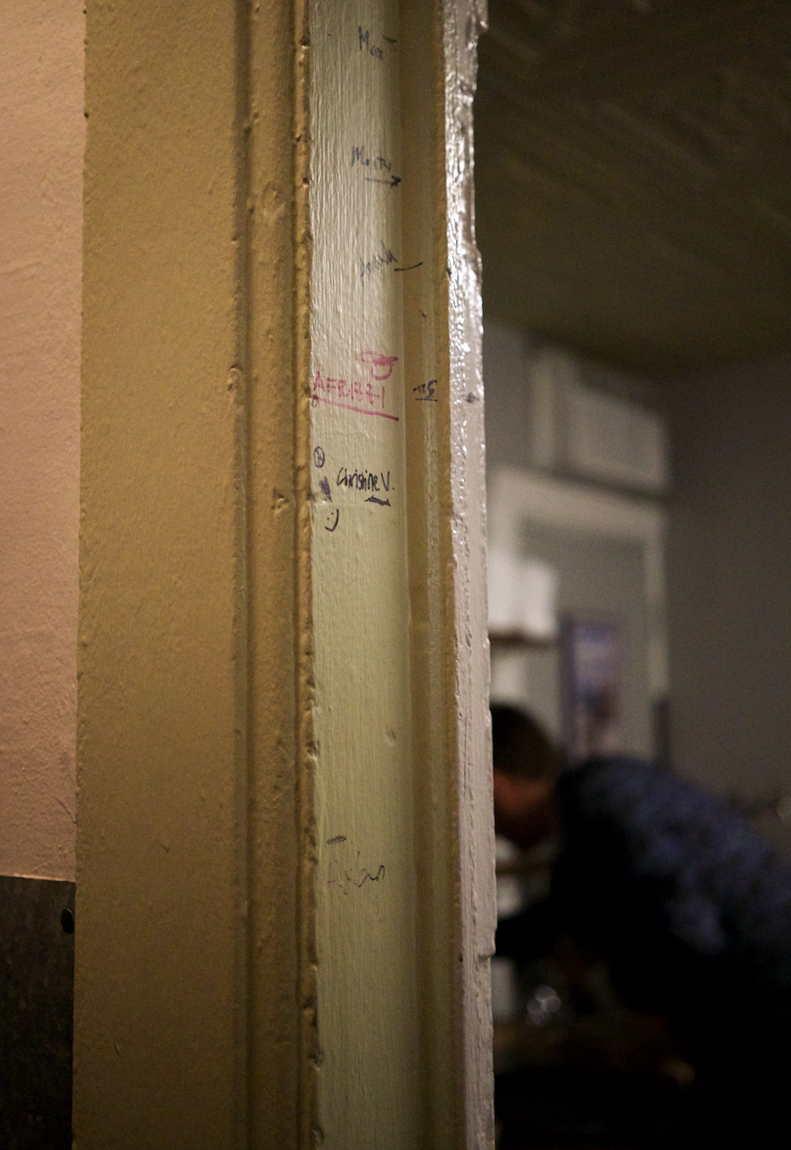 “In my family’s house, we always had that little thing that was always on the door jam,” explained Forman, as he pointed to his replica tally next to the private dining room. A dozen marks signifying the heights of local chefs, loyal patrons and restaurant editors can be spotted amongst the names of family, friends and co-workers proving that Forman is all about creating a community for whoever walks in the door.

“I like to save those memories,” said Forman, “… The restaurant has soul.”

However, much like a family, not every moment is picture perfect. 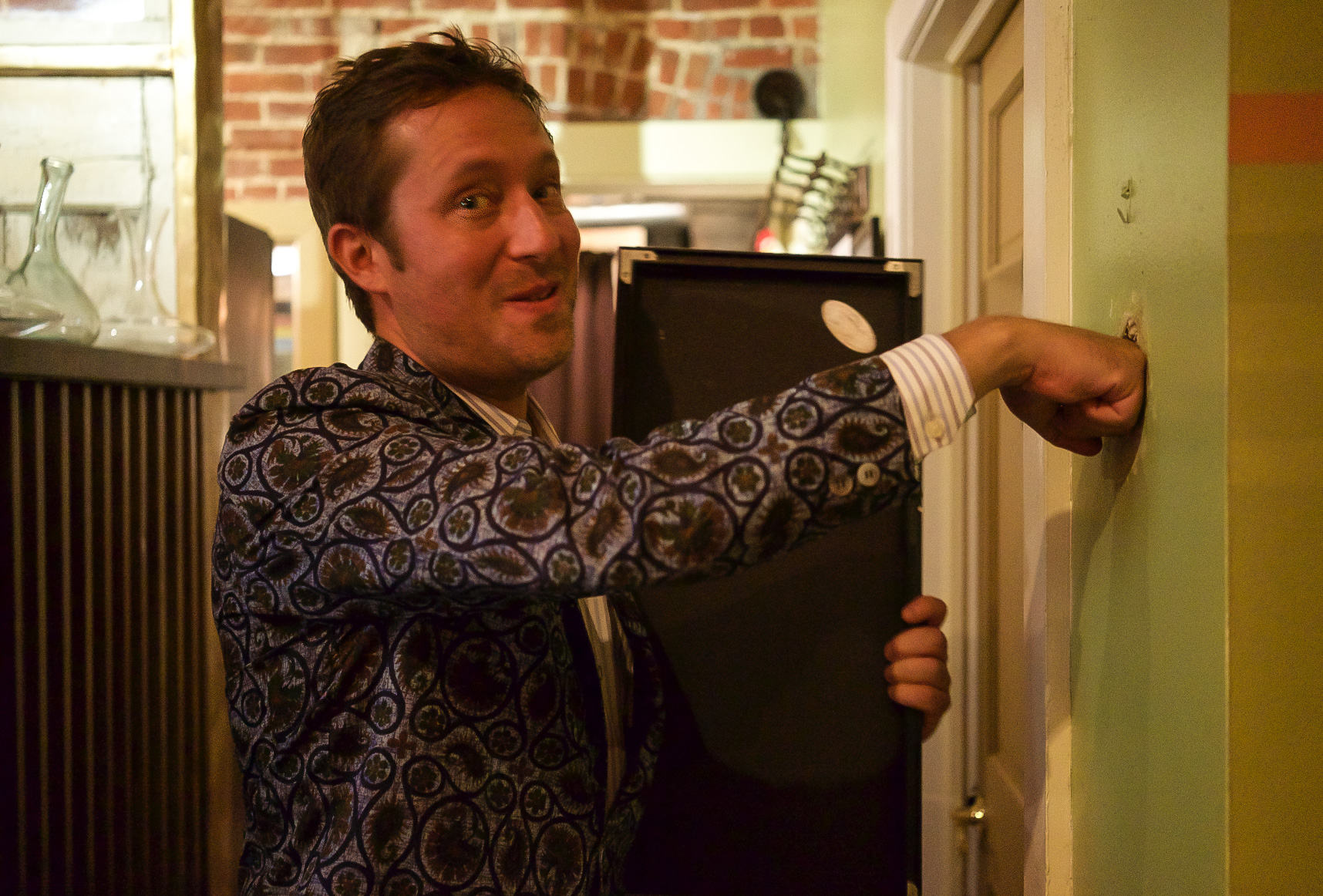 Forman replicating the punch chef Scott Michael Parker took to the wall after a rough day on the line.

Just a few feet away from the door jam, behind a framed article announcing Forman as one of the “Top Singles in the City,” you’ll find a fist-sized hole that cracked through the eggshell-colored drywall. According to Forman, it’s where former executive chef Scott Parker took out his frustrations after a particularly aggravating night at the restaurant.

“It was when we first opened and he was frustrated with one of the line cooks,” he explained. 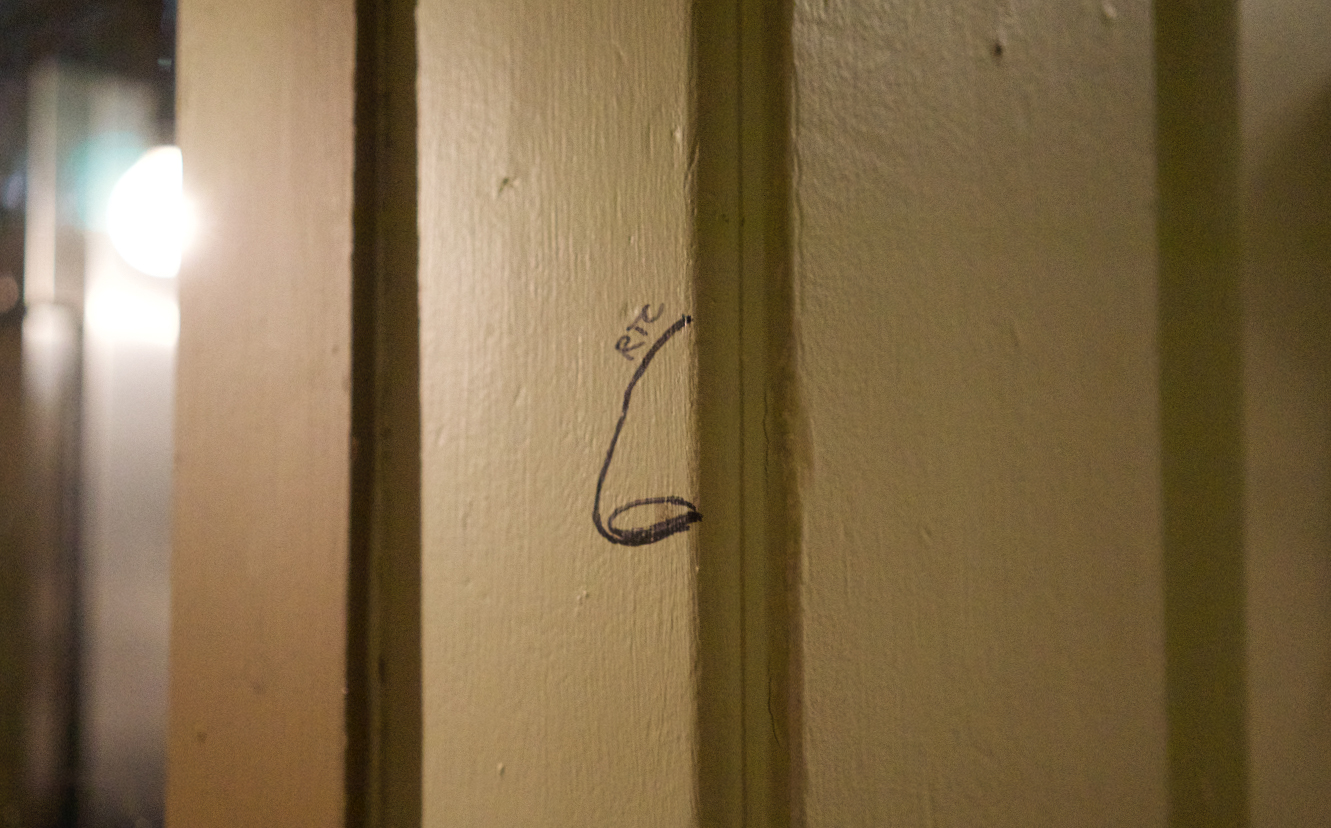 The outline of a friend’s nose at Table 6.

Like the hole punch, Forman likes to use these marks as reminders not just of moments but of people as well. On another door jam,  you’ll see the outline of a nose with the initials RTC. Forman explained the initials belong to a friend who, evidently, had a “really big beak.” 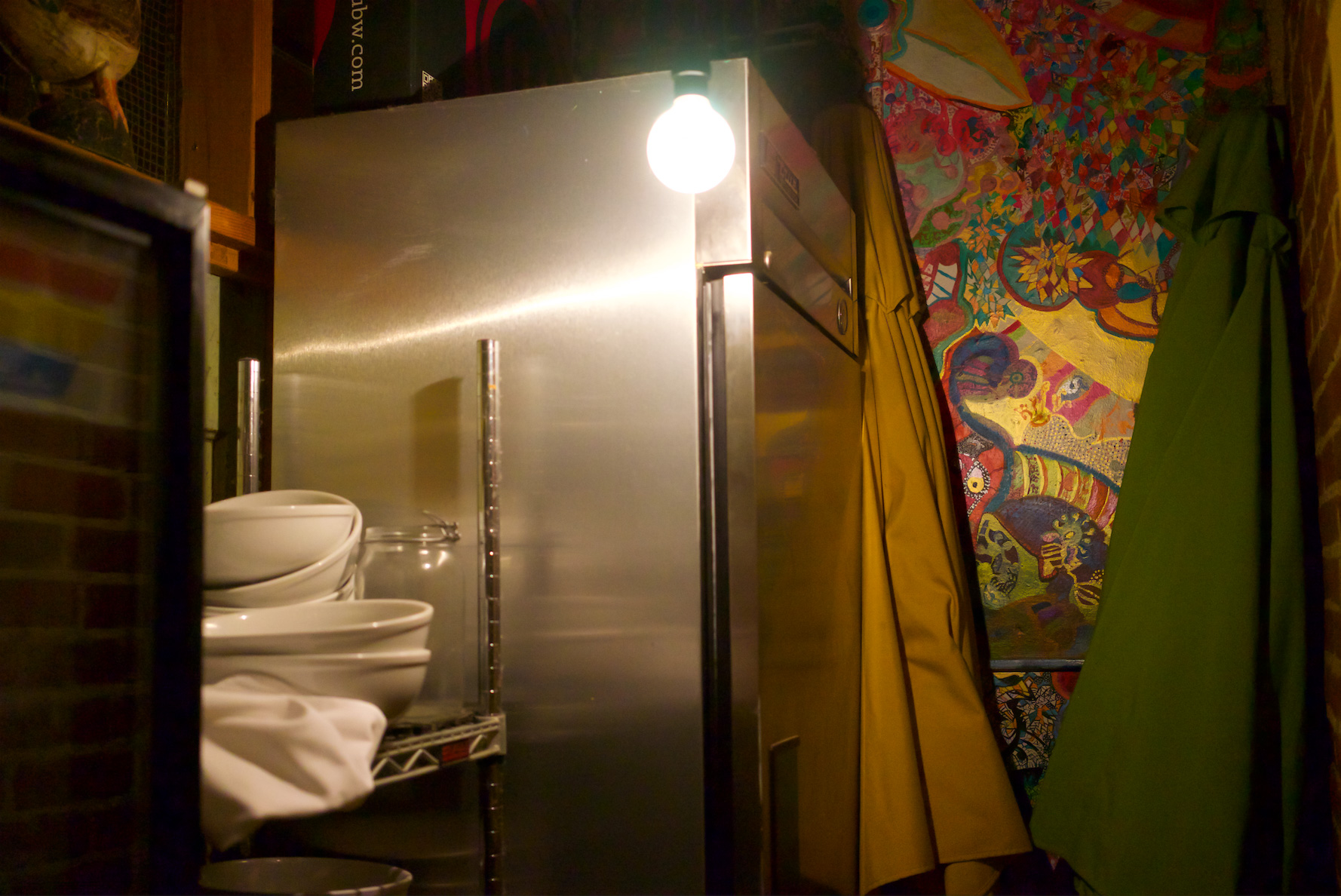 Next to the “Big Beak” is a mural painted by a former dishwasher, who lived at Forman’s house for a time. 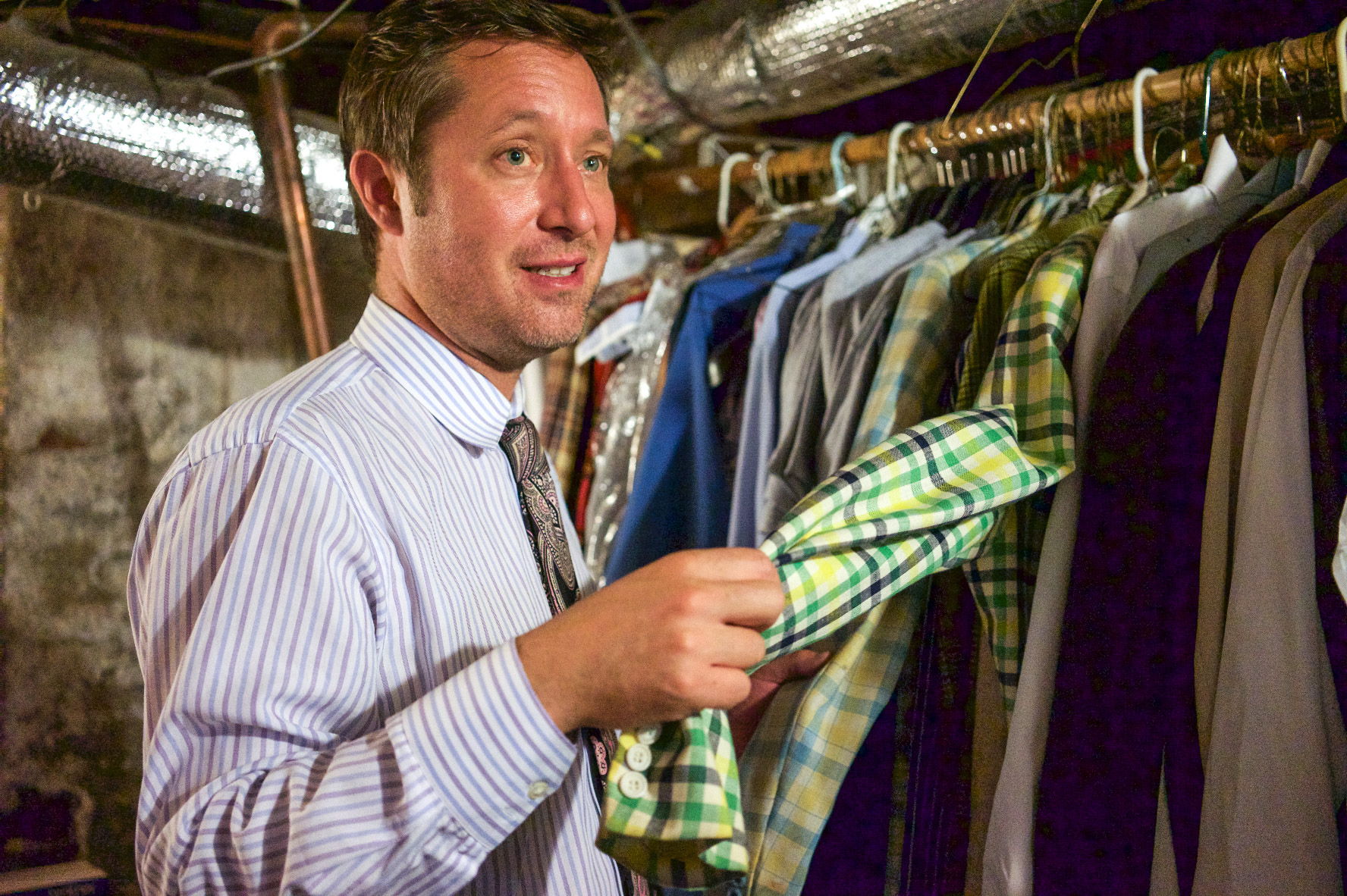 Forman showcasing his jacket collection stowed away in the basement of Table 6.

Anyone who has spent time at Table 6, or gotten to know Forman, is likely familiar with his collection of eccentric suit jackets. Bequeathed to him from family members and loyal patrons, Foreman keeps these jackets and a collection of grandfather’s ties in the restaurant’s basement, which also used to house a coal chute. Forman explains he chooses his jackets based on his mood.

“This was given to me by one of our long-time faithfuls,” said Forman of the green-and-yellow plaid jacket (pictured above).  “He’s 80-years-old and he was like, ‘Aaron, I used to wear this in the early ’70s and I want you to rock it. So it’s a part of the legacy. We’ve been around for 13 years now, which is nuts. This is home, and it’s going to be home for a long time.” 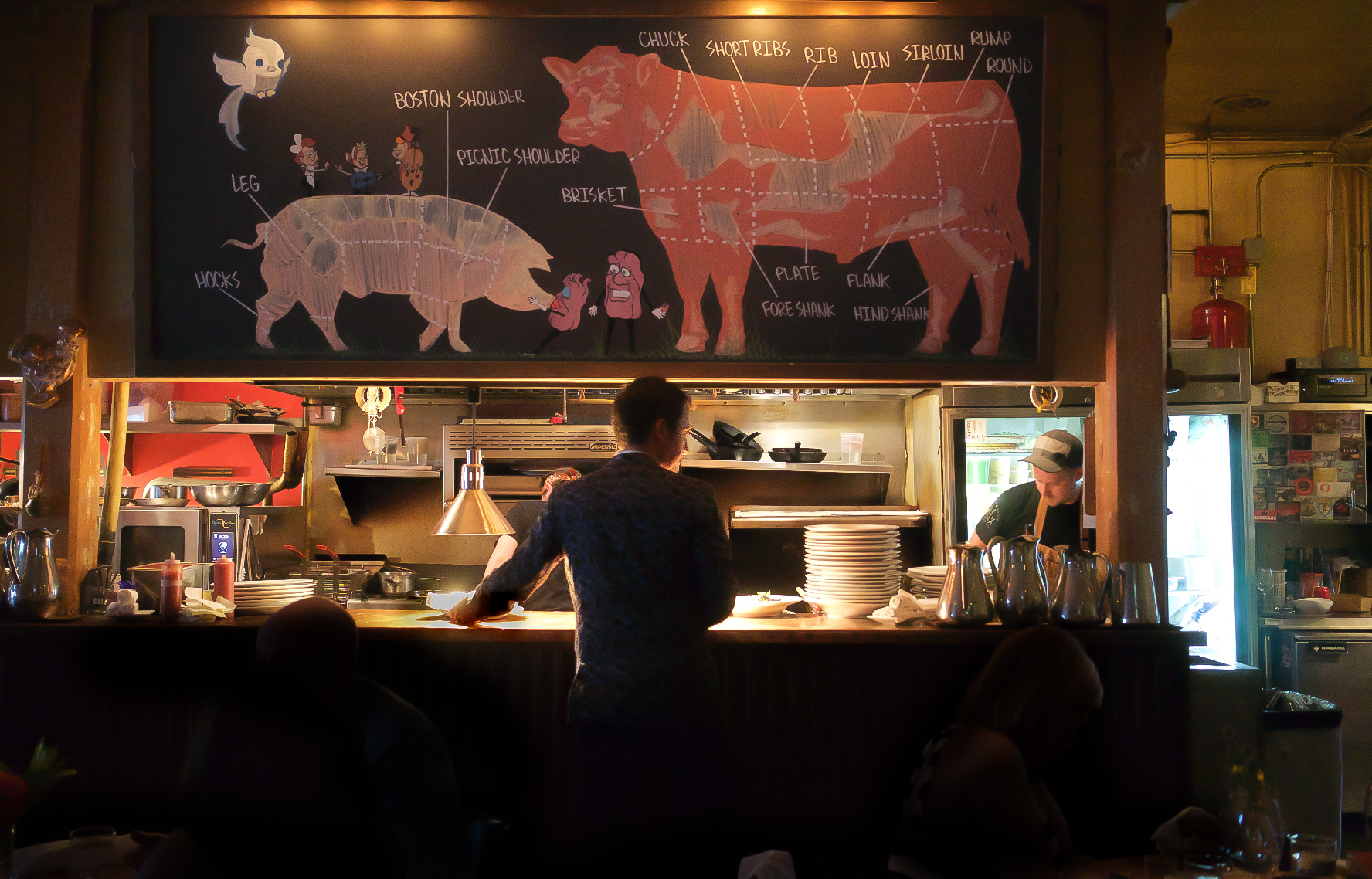 Forman in front of the kitchen at Table 6 under the drawing by artist Andy McClellan.