Chicago-bred Umphrey’s McGee rang in the holiday this year with a two-night stint at Red Rocks on July 2nd and 3rd.  Openers the Main Squeeze and Joe Russo’s Almost Dead were there as support, with the latter playing to a nearly-packed house before the sun had even begun setting. 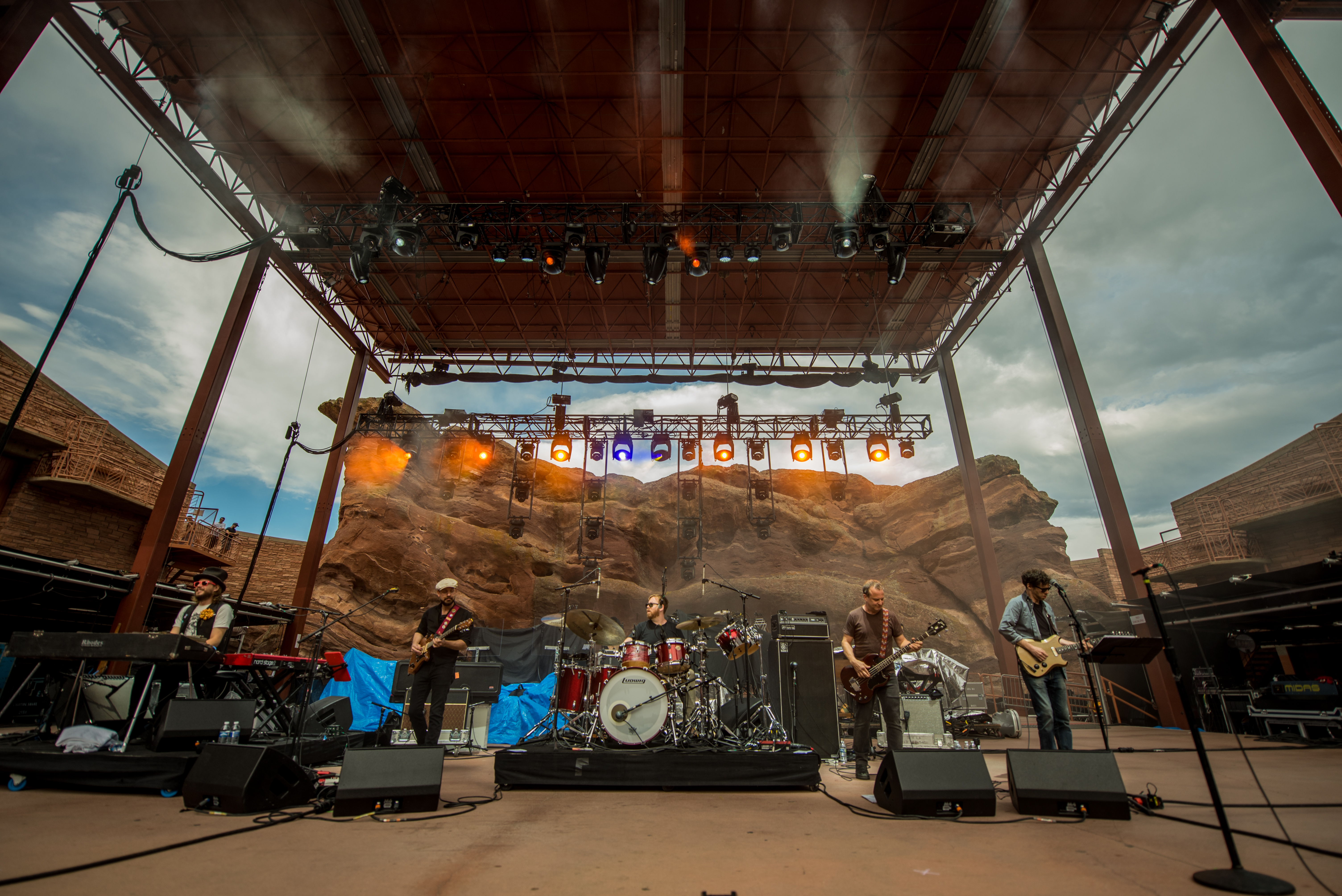 Both Saturday and Sunday’s nights of Umphrey’s beloved Colorado tradition were about sold out, and we were present Sunday evening to witness the performance of this Midwestern rock-jam band.

Though the band differs from much of the “jam band” genre by having heavier rock n’ roll influences than the usual transient/psychedelic influences, this is what sets Umphrey’s apart from every other band in their shared category.  That’s why they were able to sell out the infamous Red Rocks, and that’s why new fans and diehards  alike- sporting their hot orange “Umph Love” stickers –  came out to witness the magic. 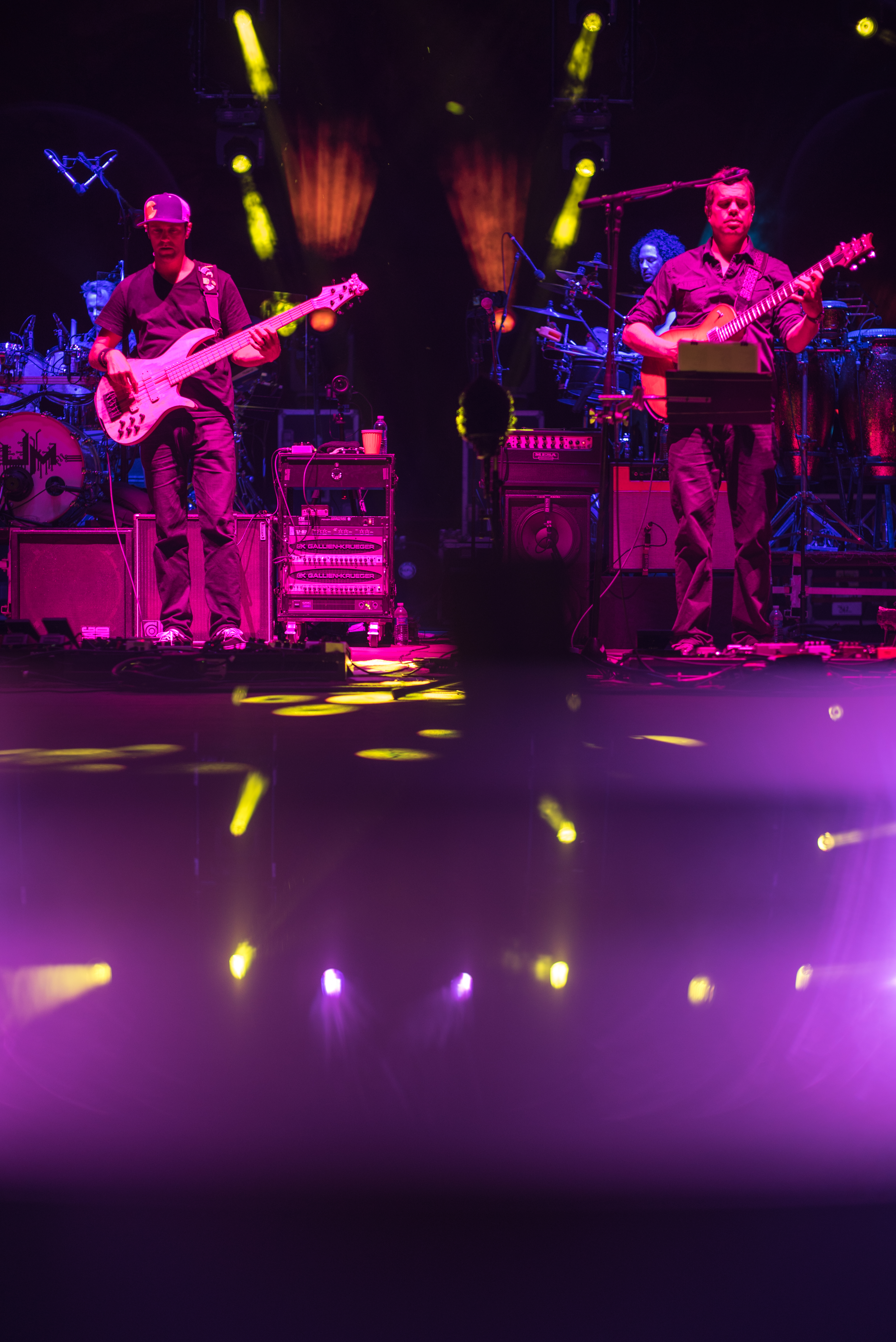 Umphrey’s McGee improves with each visit to the Rocks, and Sunday night was truly a peak moment for them.  The sound was insanely clear, and even when the music slowly transitioned into heavier rock, the clarity of the instruments and Brendan Bayliss’ ideally rock n’ roll vocals was striking.

Not only does Umphrey’s play electrifying, contemporary rock, but these boys know how to get funky as well.  Throughout the first set, the combination of drums and electric guitar created some groovy tunes for us to boogie to, which made for a impressively well-rounded night of music. 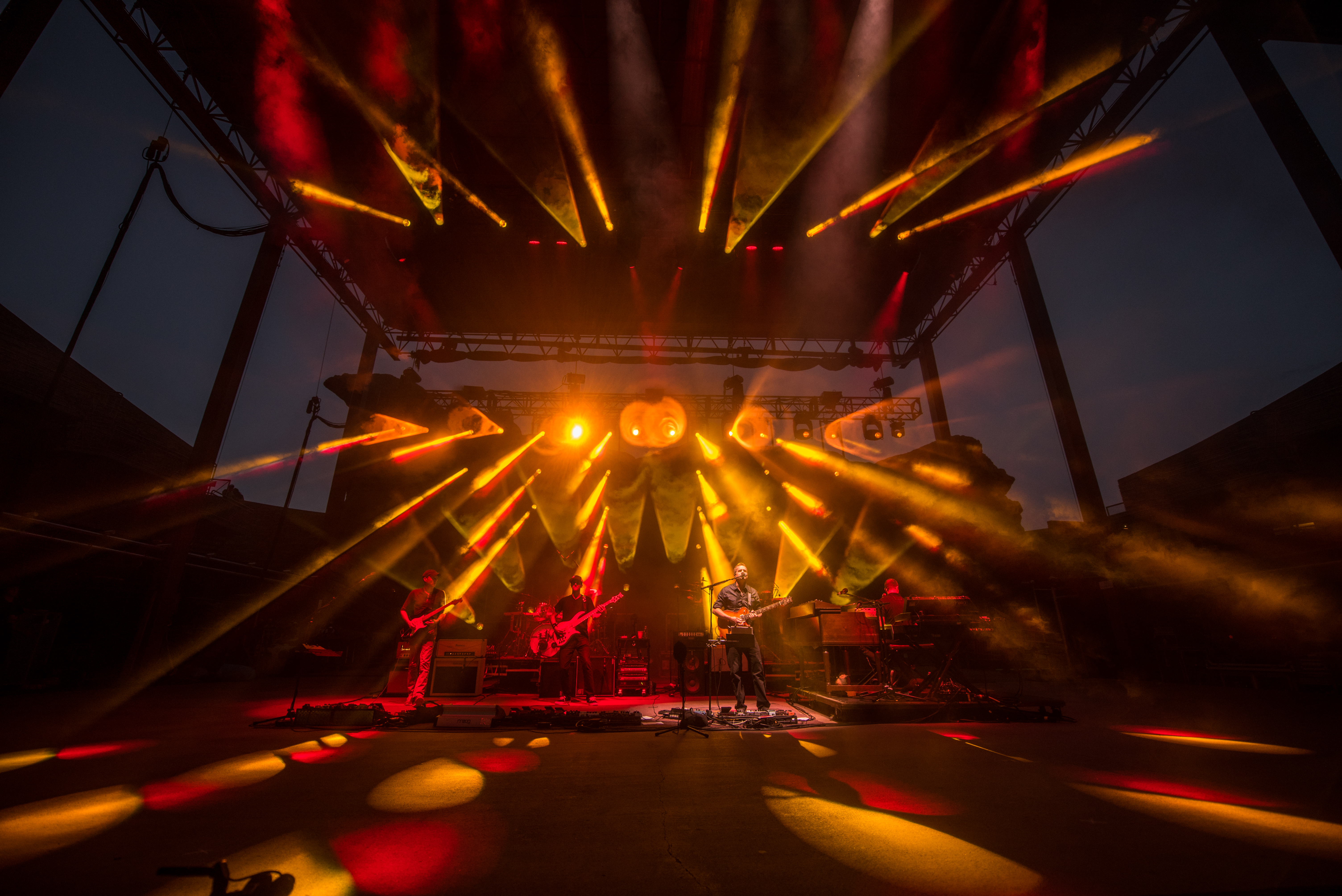 Set one boasted UM originals “Attachments,” “In The Black,” “Out Of Order” and the funky “Kabump.”  The evening turned a lil’ soulful with “Example 1” before slowing down with an acoustic, “Gone For Good.”  The tempo stuck with the band’s rendition of Led Zeppelin’s “That’s The Way,” which Bayliss sang in a beautifully-Plant fashion.

With the intense stage lights working as hard as the band and moving as hard the crowd, the set concluded with a lengthy and intoxicating “All In Time” – an epic halfway point that we the show seemed to reach all too quickly. 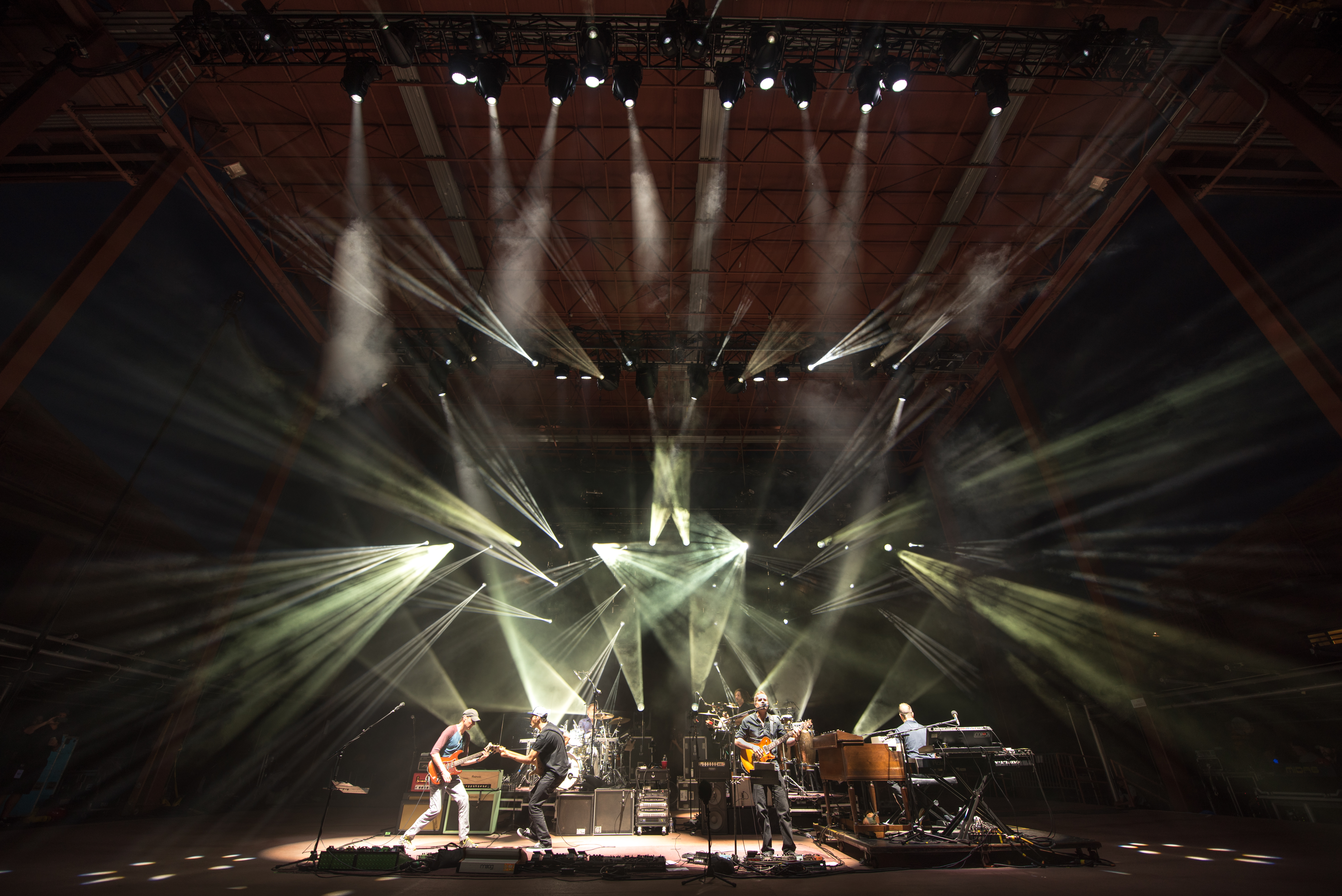 The second set kicked off with some heavier rock, and that theme was carried throughout the duration of the evening.  “Mantis” and “Make It Right” came before a transient “The Triple Wide.”  This transitioned smoothly into a fan favorite to sing along to, “Puppet String,” and exaggerating Ryan Stasik’s skills on the bass guitar. 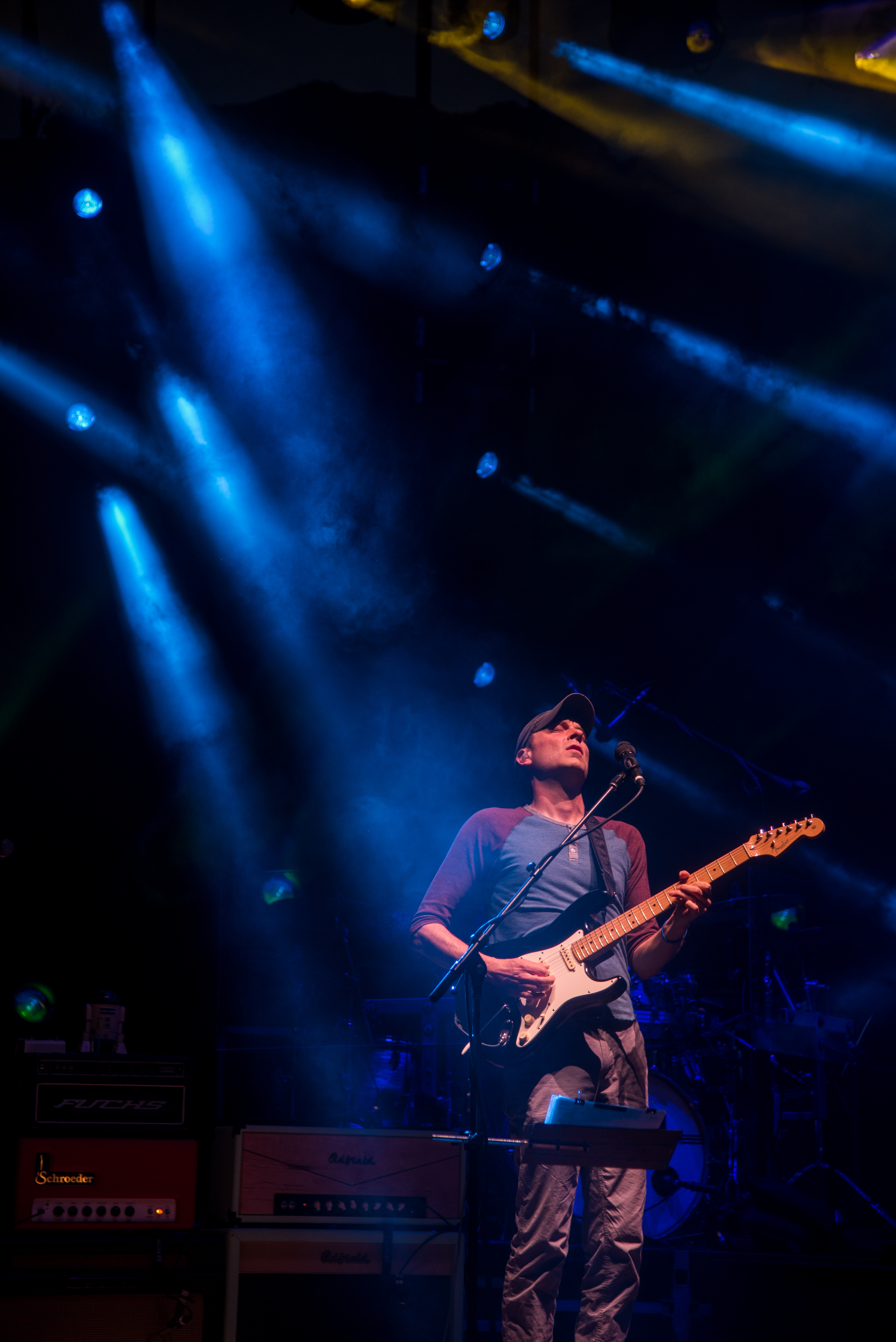 The second half of the set would bring even harder rock, with “Hindsight” and “Hurt Bird Bath,” which sandwiched the drum-filled masterpiece”August.”

The band swiftly departed and returned to the stage for a double-encore, which included the rhythmic “Much Obliged” and the second of the night’s covers, The Who’s “Join Together” – a brilliant choice of song to close out the long-awaited and too-soon-gone UMerican weekend.