A huge transformation has been taking place within the walls of the iconic Wells Fargo Center.  Since Beacon Capital Partners purchased the building in 2012, renovations have been modernizing the building to make it a better place to live and work. After improving the private and corporate spaces, an aesthetic shift was needed in the lobby, so international artist Enoc Perez and Ed Schlossberg of Manhattan-based ESI Design were invited to bring interest into the busy space.

“This lobby is just so voluminous and it almost felt like a museum,” said Cathy Mossman, senior vice president of Beacon Capital Partners. “There was no art in here previously and we really thought that it was just screaming for something interesting.”

The architecture of the building presented a few obstacles for the new owners. Designed in 1983 by the highly influential American modernist architect Philip Johnson, the building is complete with his recognizable red marble and rhythmic, geometric windows. Unfortunately, the combination of the marble and not enough window space made for a cold lobby, which made entering the building unappealing for those who weren’t already tenants.

What better way to make a space more appealing than bring in art? So that’s what Beacon did. After considering a number of artists, the company ultimately chose Perez. The reasons why aren’t difficult to discern. The work of the Puerto Rican artist has generally concentrated on architecture, making abstracted images from the forms of buildings.

But Perez doesn’t just paint for any building. He’s known for doing work based on well-known architects and buildings that define cities where they’re located. Denver’s Cash Register building is one that is so prominent in the skyline that it’s probably the best choice for Perez’s work. 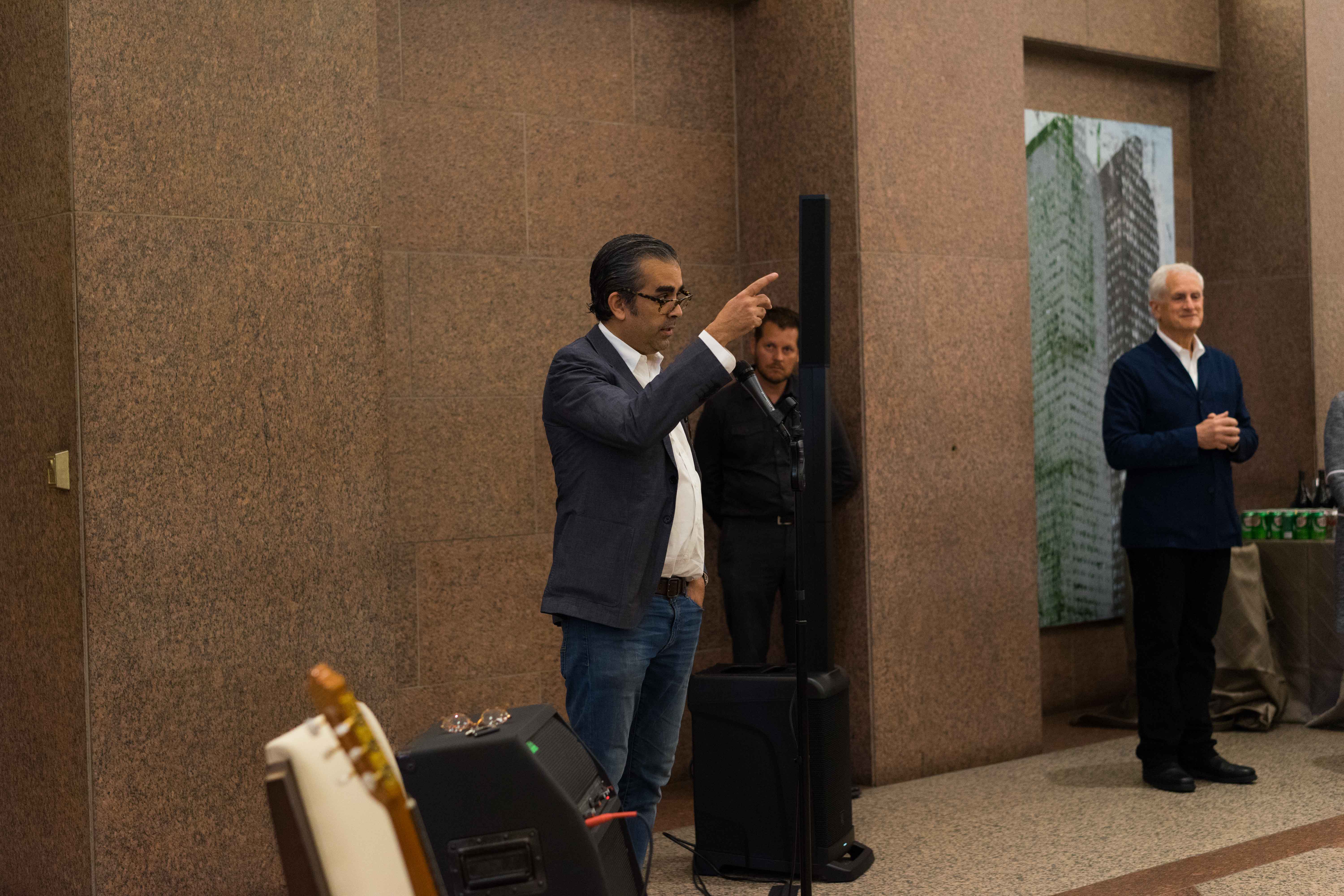 Enoc Perez discusses his work during the unveiling event, with Ed Schlossberg to the far right.

Also, the architect of the building brought Perez here. “I’ve been doing a lot of work around the subject of Philip Johnson, because he’s an important figure in American architecture as well as being a controversial man,” he said.

Controversies aside, the aesthetics of the Wells Fargo Center are what makes it so unique. Johnson was inspired by the paintings of Frank Stella and that’s obvious in both the roof and the alignment of the windows. The semicircular shape of the roof recalls the “Protractor Series” of the late 1960s, while the strict grid of the windows reflects the methodical lines of his earlier “Black Paintings”.

Perez’s paintings showcase both aspects of Johnson’s tribute to Stella, completing a cyclical relationship among the ’60s artist, the ’80s architecture and the contemporary artworks. The work of Stella, specifically his “Black Paintings”, undermined the highly gestural and existential nature of Abstract Expressionism, and influenced the Minimalist artists that proceeded him. Johnson’s building reflects those Minimalists’ efforts through his use of order and repetition. Perez fuses abstraction and minimalism with more gesture and variation, while also complicating their limitations.

The gestural abstraction of Perez’s paintings is necessary. Using both color and gestural variation throughout the series, he encourages viewers to move through the otherwise impersonal, vast and cold space of the Wells Fargo Center lobby. 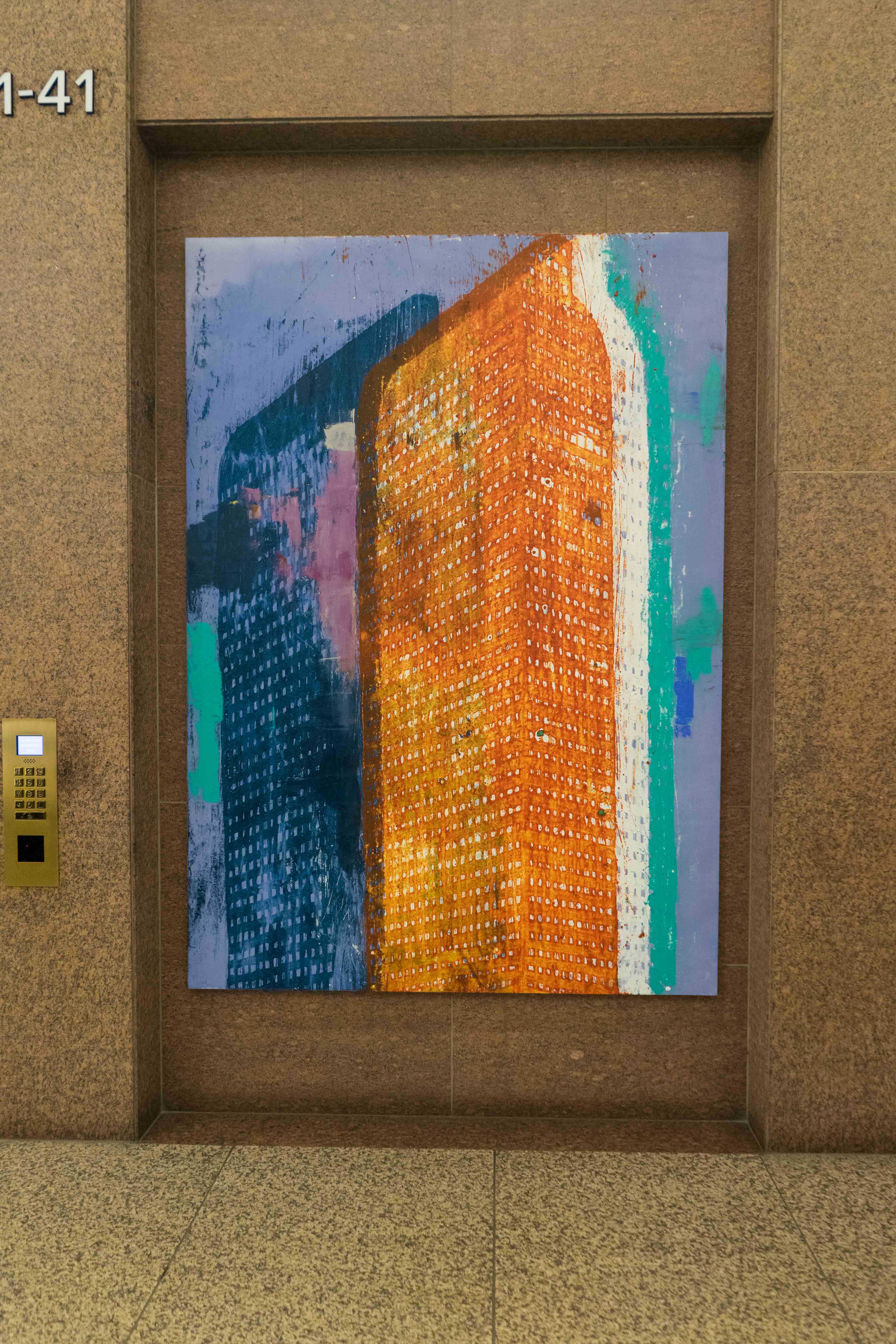 Originally conceived as a monochromatic, black and white series, Perez eventually moved to the muted color palette that compliments the red marble rather than fights it. “I wanted it to make sense with the building,” he said. “The color for me is a way to reach out to grab people’s attention.”

The outline of the building in each painting allows for a slight departure from traditional abstraction and makes them more like portraits. Like portraiture, Perez’s paintings point to the often implicit influence of architecture.

“I started from a very personal point of architecture as a symbol,” he said. “It also started right after 9/11 when we were painfully reminded of the symbolic power of buildings. That’s why the subject is important.”

The ability to appreciate the new paintings would have been difficult a few years ago because the lobby was so dark.

To brighten up the space, Schlossberg and ESI took a cue from Johnson’s square windows and created a series of light boxes. They then brought in a light designer to map the space for optimal placement.

“For me, lighting is always about: how do your eyes look?” said Schlossberg. “If I can see the whites of your eyes, if I can see a little bit color, I know the lighting’s great.”

More impressive than the new lighting is the 86-foot digital media installation on the North wall of the glass atrium. The work consists of five LED panels that display incredibly high-resolution footage of myriad images.

“The irony of the space when I looked at it for the first time was it was sort of like a greenhouse, but there was no life in it,” Schlossberg said. “It was a weird tension, so I looked at this big wall and I thought, ‘We have to create a window out into the world so the life of the world is in here.’”

Taking inspiration from a panel series by Japanese Ukiyo-e artist Hiroshige, Schlossberg imagined a way to bring a sense of nature into the space without making a literal window: “To make it like a figure-ground thing so that the solid wall is like a fence and the LED is like the space between the fence,” he said.

Instead of just displaying the same videos over and over, ESI created a series of digitized images that circulate throughout the day and vary depending on changes in temperature, wind speed and barometric pressure as measured by a sensor on the outside of the building. “So when you see the leaves on the screen moving around, that’s how much wind is in Denver at the time,” Schlossberg said.

To be fully appreciated, the installation needs to be experienced in person. At any moment, a peaceful waterfall will become a bright pink light with dark liquid coming from above, or five Instagram feeds will take over. The feeds change constantly based on algorithms from Instagram based on users who have images in Colorado.

The technological aspect of the installation makes the work more than just another light show. The decision to bring the outdoors indoors by way of a more scientific but not literal means adds a layer of interest that highlights the variations in Colorado weather. Because the weather here seems to change by the minute, the installation can be watched for hours on end.