An exciting collaborative show, “They Still Live,” is opening on Thursday, June 30 at RedLine. Artists Thomas “Detour” Evans and Tya Alisa Anthony have created a series of photographs pairing models with objects from the Paul Hamilton Collection of African Art. The objects chosen for each model was based on DNA test results from ancestry.com and those results will be available for visitors to see during the show.

A hallmark of postmodern art is identity. It is the foundation of work dealing with issues of gender, sexuality and race. However, one of the more difficult avenues of expression for African-American artists is heritage past the American experience. By connecting an identity directly to Africa, the subject and the viewer become forced to acknowledge the legacy of slavery, colonialism and imperialism. What makes “They Still Live” so intriguing, though, is its focus on the pride of each model as they carry and wear the incredible items from Dr. Hamilton’s collection. That pride is important in America’s increasingly tense political atmosphere. 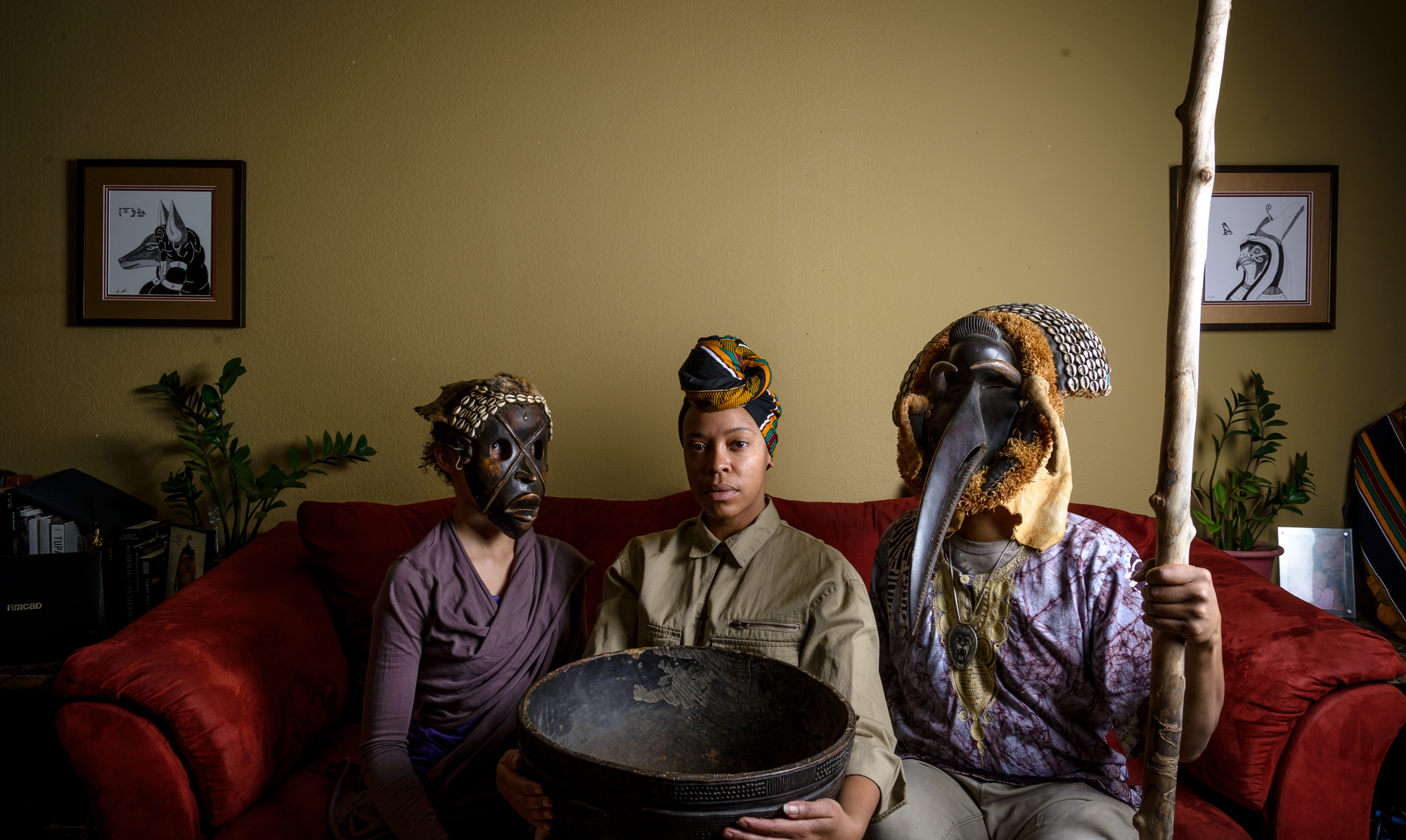 Seeing the collection in person makes for a unique experience, unique because of different discoveries every time you enter a room. Dr. Hamilton has been collecting African Art since the 1960s and increased the activity in the ’80s after meeting dealer, collector and appraiser Peter Natan. The more than 900 piece collection fills Hamilton’s Five Points three-story house, filling every nook and surface with Yoruba Ibejis, Toma masks, Nkisis, oracles, books, photos and much more.

The collection is what sparked the creation of the show. After Hamilton saw Evans’ studio, he invited him to his house to see the collection and talk. “When I came here, it was like, ‘Whoa!'” Evans said. “And it really inspired me because this is a lot of African Art that you really don’t see outside of a museum and have access to.” 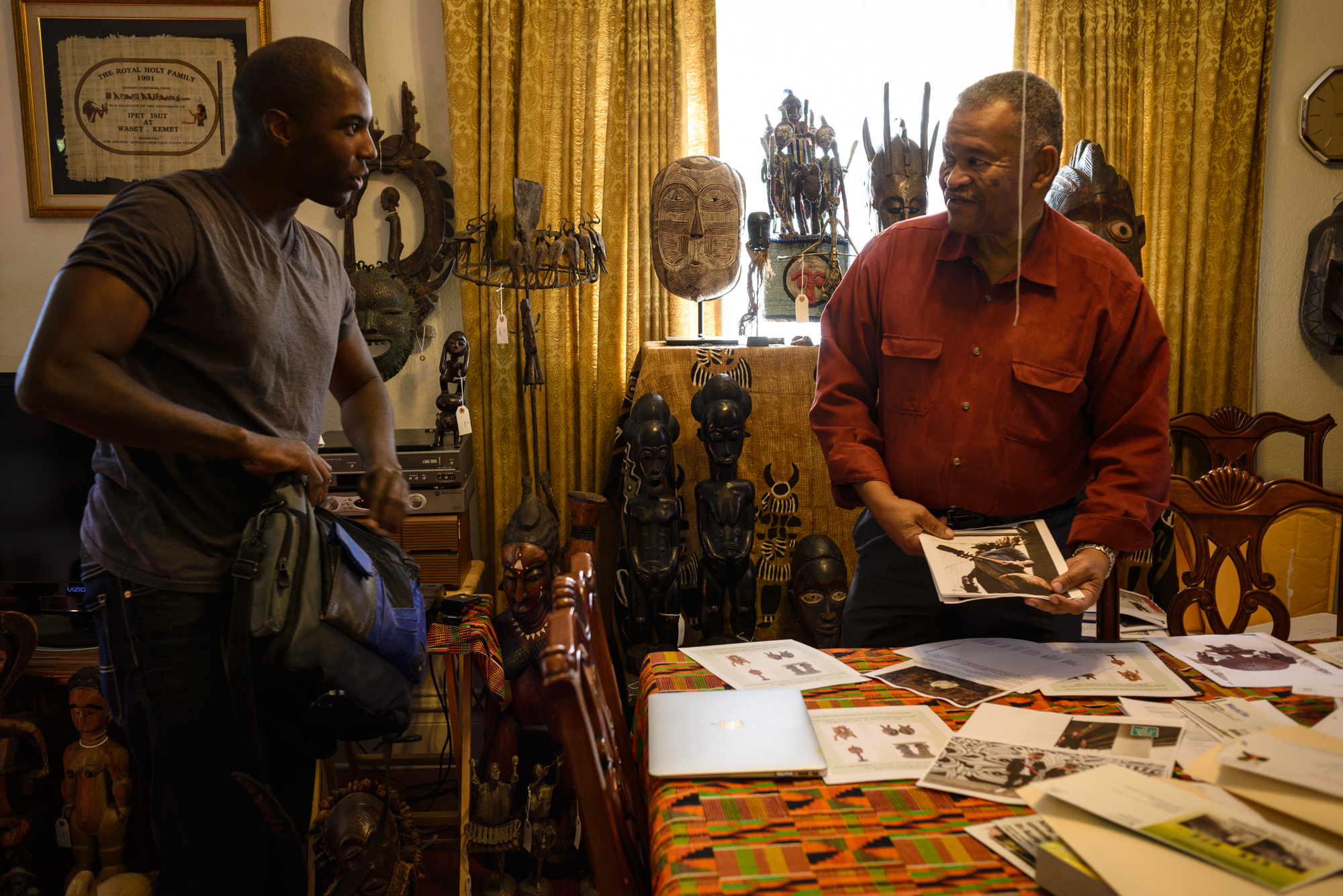 From the first visit came a conversation about making the collection more public and the idea of the DNA testing to connect the models with the objects also came about. “The year before I was in Tanzania doing volunteer work and I got my DNA test, so when I came back and was telling everybody, people were inspired by it,” Evans said. “So this was a perfect time to combine the two and get the DNA test on all the models and figure out where they’re from.”

For a year Evans worked on gathering data and doing test shoots before Anthony became involved. She was already working with identity-based self-portraits at the Rocky Mountain College of Art and Design when she first contacted Evans.

Her involvement in the show and with the collection was powerful for her. “When you’re in a museum, there’s barriers and you’re separated, and being able to actually physically hold it is like holding a precious piece,” she said. “They’re full of so much energy and being able to hold it meant a lot.”

The models chosen were people who are involved in activism, music and other endeavors that Evans felt made them special. “They are very conscious of where they come from,” Evans said. “They’ve wanted to know about their histories, but never had the DNA test.”

The involvement from each of the models sparked conversations among those involved and allowed for some great surprises, like when Evans found out that Panama Soweto and Ietef Hotep Vita (DJ CaveM) were related after knowing each for years. The project also allowed Anthony to further explore her identity and improve her own art.

“It really helped me push along what I wanted and how I really felt,” Anthony said. “Trying to express to a model behind a mask how to exhume an energy is at time difficult, so I took it upon myself to add that into what I was doing with my pieces.” 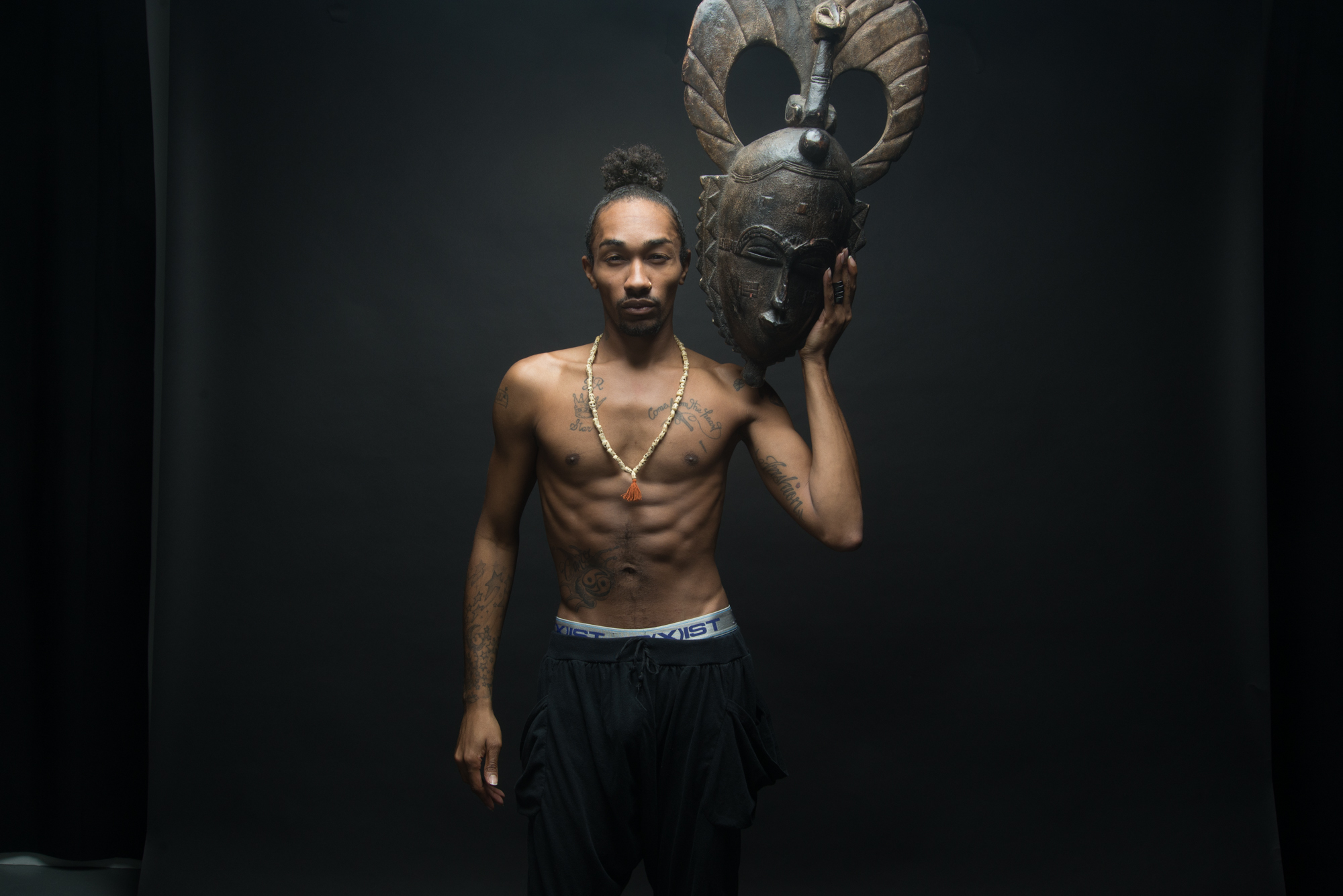 The juxtaposition of the masks with the locations in the background lends to the individuality of each model, but also says as much about Evans and Anthony as it does about the model. Their choices of object and location depended on the artist’s connection to it, which is interesting to consider while you look at each photo.

The resulting image has its own history beyond curating the model and object. Imagining the conversations between Evans and Bianca Mikahn, or Anthony and Willie Watkins while they discussed the mask for the photo is just as intriguing as viewing the series. After all, conversations about heritage and identity are the reason for the show.

“When I was growing up, to call a person an African was a fight,” Hamilton said. “That was worse than calling them black, but that was a fight, too. There was so much not knowing, but also what you knew was Tarzan and it was just backwards, so people hid and didn’t talk about that. They didn’t talk about the South and slavery and the discrimination. It was all too painful.”

The legacy of that pain is likely why it has taken so long for anyone to make a show like this. In order to further the conversation and education about heritage, more work is needed and Evans is hoping to get more DNA tests from ancestry.com in order to increase the number of models.

The opening reception is on June 30 from 6-9 p.m. The show is open until July 18 and there will be a discussion about the project on July 1 from 6-8 p.m.  RedLine is located at 2350 Arapahoe Street.

For more information about those involved, visit their websites:

Below are photos by Carlos Escamilla taken of the collection.