Review – What you Missed from Sia at Red Rocks

Last night was the kick off party for SeriesFest Season Two (in partnership with the Denver Film Society), a five-day international showcase of independently produced television pilots. This weekend’s SeriesFest events will take place at the Sie Film Center on Colfax and will include an array of panels, screenings, storytelling competitions and workshops with writers—all of which are open to the general public. Last night’s kick off show included an epic hour long set by Grammy and Golden Globe nominee Sia. The kick off took place at Red Rocks, amidst somewhat unsavory weather, featuring exciting gale force winds accompanied by warm summer drizzle. It was a curious mash up of a pop star juggernaut with the celebration of televised creative content—but art is art, no?

Before Sia’s performance, BBC America debuted the first episode of their new documentary series The Hunt. The seven-part series airs this July and is produced by the talented crew behind Blue Planet, Planet Earth and Frozen Planet. This means exactly what you think it means: that you’ll watch the show, mouth agape, wondering how in the world they got those shots. For example, a pack of hyenas chasing down a hulking wildebeest or an iguana snagging an unsuspecting praying mantis with its obscene tongue. There’s even some whale-on-whale action. More fascinating nature footage eloquently narrated by Sir David Attenborough—television really doesn’t get anymore entertaining than this, folks. 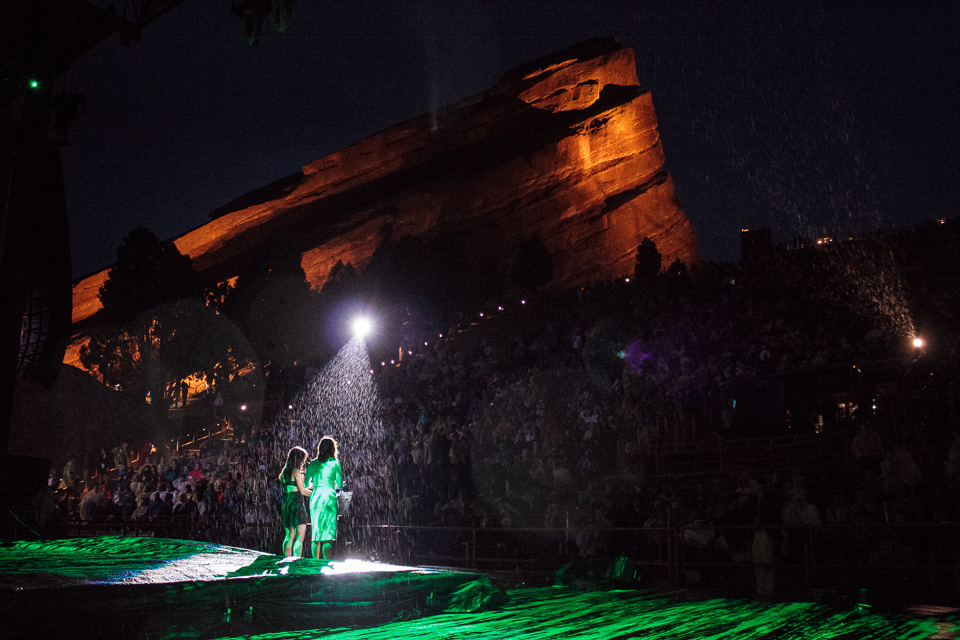 By the time Sia came on, much to the elation of the excitable wig-clad audience—most who didn’t seem to realize they’d have to sit through “some National Geographic shit,” to quote one attendee—the rain had cleared and the smokey waning moon rose high above the amphitheater. We had waited so long and so (im)patiently throughout the precipitation, watching as the wind whipped rogue plastic ponchos high into the air. At last, the time had come. 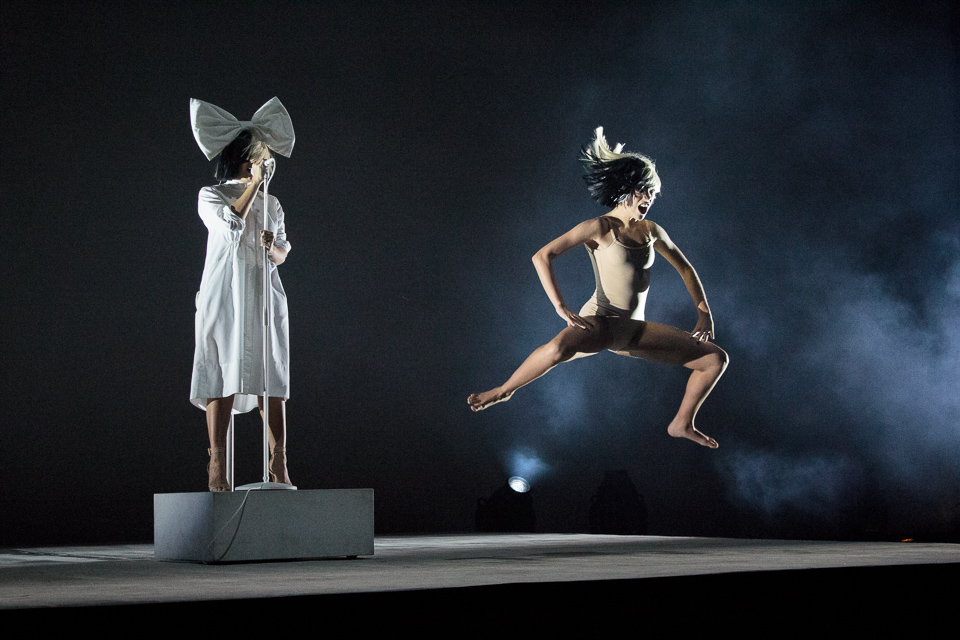 The show wasn’t exactly lighthearted, not really a walk in the park. When the lights came up at the end, most of us were left wondering, “What the hell just happened here?” After an hour long set of deeply moving, emotional and ethereal music, the crowd quietly dispersed, utterly bewildered.

Sia’s performance—which was truly the Maddie (Ziegler) show—was entirely raw, impassioned and even a bit overwhelming at times. I really hadn’t expected to feel so many feels throughout her performance. It was gut wrenching. Sia’s amazing voice filled the amphitheater and echoed off into the heavens, leaving us savaged bystanders lost in its wake.

The many dancers, with their matching Cruella De Vil hair styles, immodestly interpreted a broad spectrum of human emotion through movement: loneliness, stress, anxiety, worry, outrage, frustration, despair. They paired off and had passionate dance fights, reminiscent of that one you guys had once, the one you don’t tell other people about. The one you’re ashamed of. But they did it wildly and shamelessly on stage, in nude leotards and matching wigs. There was nothing jovial about the show. There weren’t smiles, no kicks. There may have been tears, for reasons that are yet to be determined. Maddie flailed around like a graceful yet brutish feral child. All throughout, she remained extremely animated, tugging at her hair and face, her expression ever changing. Her eyes wide, exhibiting paranoia or fear. She would claw and scratch at invisible attackers, liberally throwing punches and high kicks. 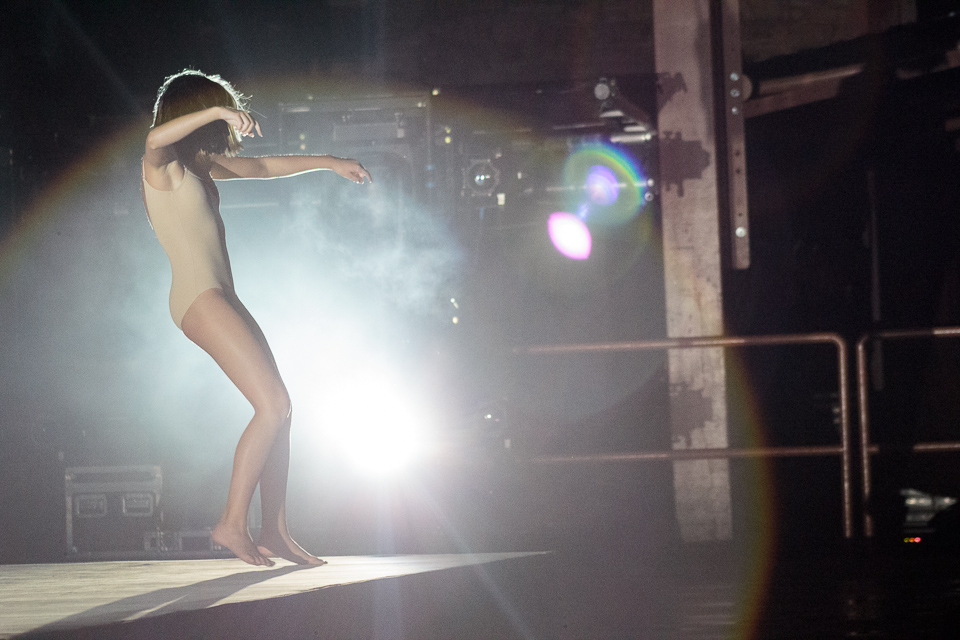 Sia’s performance was deep. It shook us up; it moved us. Her voice provided a haunting backdrop (as she stood alone with a microphone in the corner, barely moving—was she even real??) to the otherwise silent dance performance. Maddie encompasses the role of overly animated mini-Sia, at times appearing frantic, confused, overwhelmed: a manic mime of sorts. Oh my, and when she wriggled across the stage on her face, ass in the air like some sort of alien snake. Unbelievable.

Was there a common theme amongst the characters, other than their total despair and apparent hopelessness? Was that guy sitting at his desk ready to take the leap, and was he the same guy that was slouched sullenly in the chair in the corner of the stage during that other song? And does he know the guy with the giant hands on his shoulders who came out during “Breathe Me,” which otherwise might have seemed silly if it wasn’t actually so damn sad? At one point, Maddie and her partner came out wearing shabby animal costume heads that looked like they’d been salvaged from a funhouse dumpster, bashing each other with a giant hammer, cartoonishly kicking and punching at each other. But still, it wasn’t funny. It was just all so intense. 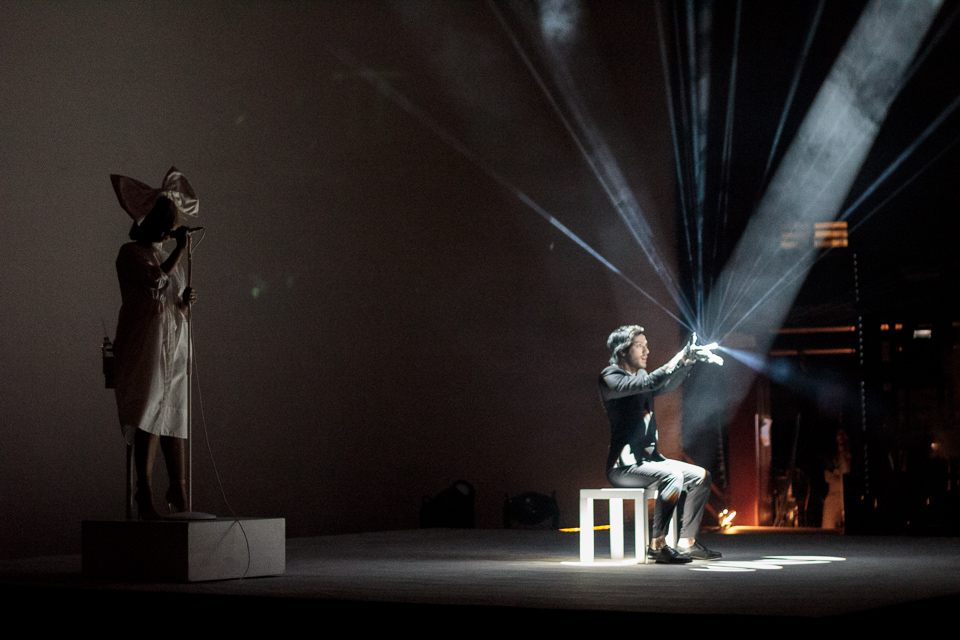 The whole thing was otherworldly because Sia doesn’t seem human, despite all of those feelings being boldly on display. She wears that giant wig, which I was sure was going to blow off under the weather conditions (alas, just the oversized bow was removed, as it flopped around wildly above her petite frame like a caricature of Minnie Mouse). She stands alone on the stage with no band and often out of the spotlight. That’s right, there was no band in sight. This always confuses me, when singers have no bands surrounding them. You can look up many older videos of Sia singing with a band, her face uncovered like a regular person. It’s like she’s made a transition from a human to this untouchable pop idol by removing her face from the picture. During one song, her voice broke and it sounded like she may have been crying, which would have been more moving if we could’ve in fact seen her expressions. But we couldn’t.

The drama, the theatrics, the performance value of it all—while it didn’t take away from Sia’s incredible voice—it was certainly unlike any concert I’ve ever seen. It sure was a scene. A beautiful scene. I am not sure what I was expecting, something more pop-centric or happy go lucky, perhaps? Something more Gaga? And it’s funny, because watching Sia in interviews (or even her older videos, pre-wig), she seems so cheerful and lighthearted, so Australian. She giggles easily, all smiles and red lipstick. She seems like she could be your mate. Like you could grab a sandwich together and bullshit about life. But that was not what we witnessed at Red Rocks last night.

It’s not that the show was entirely depressing, but my God. It was something. When it boils down to it, it was quite simple and oh-so lovely—and all very monochromatic. So what if I went home and cried myself to sleep?

All Photos by James Dimagiba