The Low Down on 104.7 FM, Denver’s New “Local Music Only” Radio Station

On Friday, June 3, Denver officially embarked on a new experiment— a radio station that plays music only by and for the people of Denver. For 24 hours a day, seven days a week Denver Open Media’s 104.7 FM will broadcast music and other content such as comedy and podcasts with the intention to create a consistent showcase for our city’s talent. But unlike other stations with full-time DJs, the majority of what’s on air is chosen by its listeners through a voting system on DenverOpenMedia.Org, with the most popular content filtered to the top via an algorithm. At other times, the door is open to local guest DJs to come spin their favorite tunes. But not only can people take over the airwaves as a DJ, they can submit their own programming to be voted on as well.

On their first day of operation, we sat down with Open Media Foundation Executive Director Tony Shawcross to talk about the new radio station, the challenges it faces and how it defines “local” to get a better idea of how and why this new station functions.

Tony Shawcross: It’s going great. We went on air just this afternoon, and we are going to be broadcasting live for 10 straight hours we had 24 guest DJs today.

303: Can you explain what is Denver Open Media and why it exists?

TS: For the past 10 years the Open Media Foundation, one of our biggest projects has been Denver Open Media which is Denver’s public access tv. So we are a free speech, non-commercial organization. We exist to put the power of the media in the hands of the community so the public access station is one of our best tools to do it. People will have free access to these studios, to this equipment, to be able to make their own media. The goal is to broaden awareness to on non-commercial issues. Some people myself included feel like our commercial media system is dominated by commercial messages and that there’s a lot of important messages around non-commercial issues that we want to have attention around so that is what Denver open media exists for. 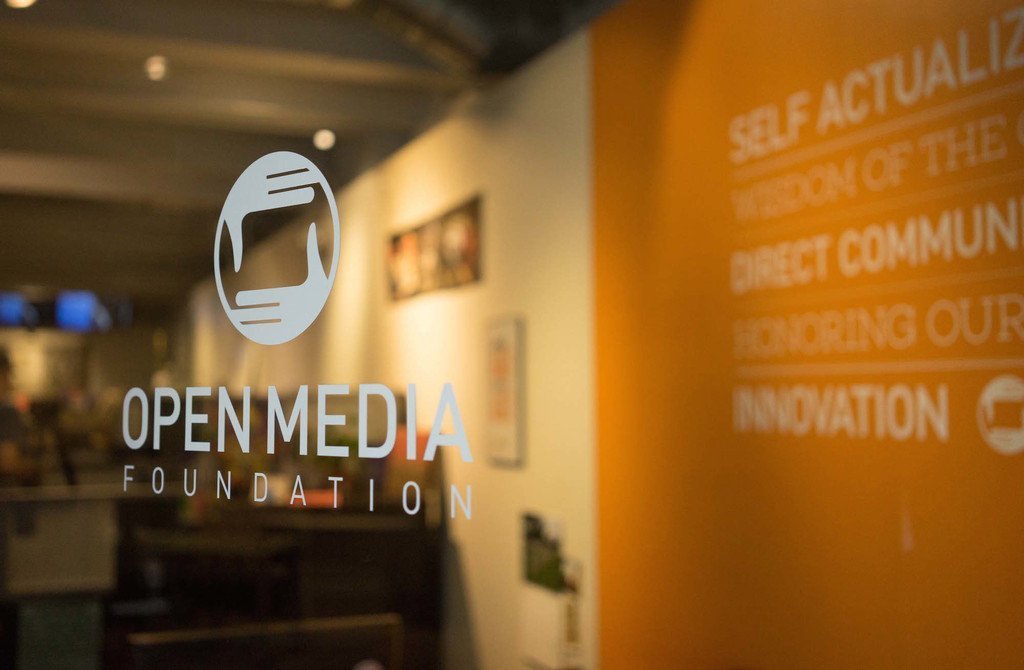 303: How did the radio station get started?

TS: The radio station Denver’s 104.7 FM is part of a groundbreaking move. The FCC has done a lot of the low power FM stations but usually in really rural areas. About four years ago they announced some new urban signals including the one in the heart of Denver and in the surrounding areas, so we put together a bid to extend what we are already doing with Denver Open Media. We ended up essentially tied with another local non-profit called Denhac Denver’s first hackers collective and as we met them, we realized our goals were very aligned and we decided to combine proposals. They are an amazing partner and have done all the technical work.

303: The goal with the radio station is to promote Denver artists, correct?

TS: Yeah, and Denver arts. When we had the opportunity to launch a station, KGNU is in our building they are an awesome community radio station in our building, nationally known and they have a great model for community radio so we didn’t want to replicate what Open Air or The Colorado Sound 105.5 are doing. And the best way to honor the vision of Denhac and Open Media foundation is to not replicate what’s being done in Denver to have a station 100 percent dedicated to local musicians. So you’re not going to hear Jay-Z and national bands it’s just going to be local bands, local podcasts, local media and local news. A part of that is to fill a gap and not do what is already being done.

TS: We have a really broad definition of the word local. Dan Landes [one of today’s DJs] wanted to play bands coming to town. So we aren’t going to police it. The goal is to give a lot more exposure to bands you’re not going to hear.

TS: Shit. Thanks for letting me know!

“We have a lot of room and opportunity for any Colorado creatives to submit any content they have and put out on the radio station.” 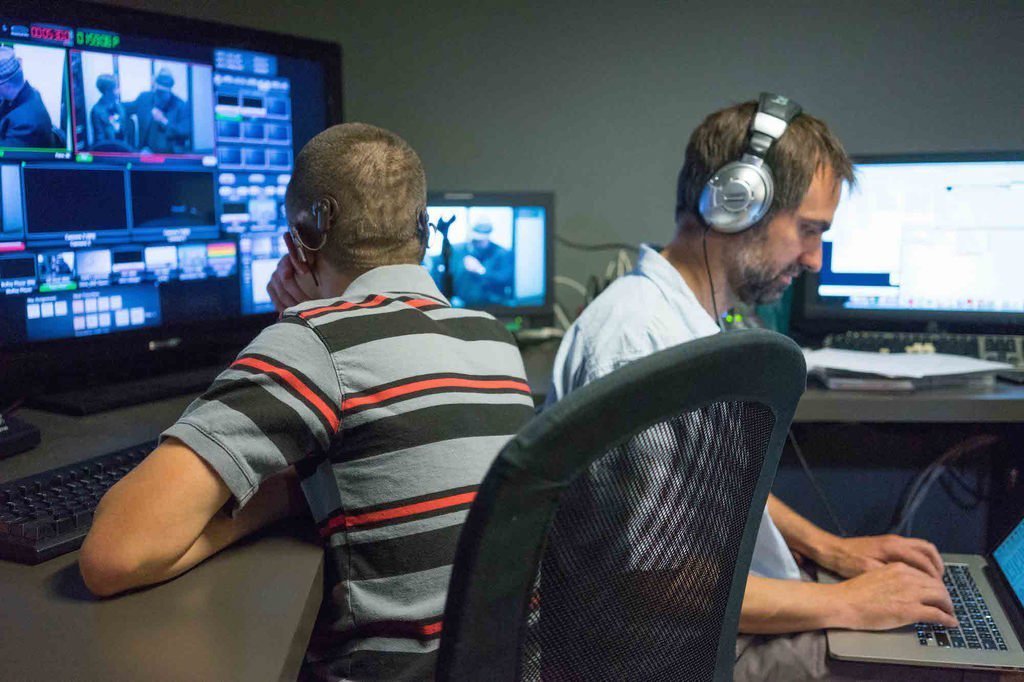 Tony Shawcross (left) in the studio on the first day on the air.

303: So regarding the submissions, what are the restrictions? From what I just heard, I’m assuming you can’t just take whatever?

TS: They have to have the copyright permission to air. We will soon have ASCAP, BMI and SESAC licensing… It’s a blanket permission to play anything covered by those rights organizations. So the only real restriction we have is it has to be non-commercial in nature, it has to be local however the DJ wants to define local, or have a strong local connection and thirdly it can’t be indecent or obscene. Our TV stations are not beholden to the FCC laws since they are not over the air waves but with radio being on the airwaves you can’t say fuck, piss, or shit… can’t say motherfucker.

303: But it’s not just music. It’s comedy, news and podcasts. What does your initial programming look like for the first week?

TS: We gave away 104.7 free memberships and so we’ve had about 100 people submit because you have to be a member to submit. So far 600 [segments] have been submitted, but not just song but shows like The Narrators podcast and a lot of content from Denver Open Media that works really well there. We have about 10,000 shows on Denver Open Media. Between those new submissions and the existing stuff, we have enough to broadcast 24/7. We have a lot of room and opportunity for any Colorado creatives to submit any content they have and put out on the radio station. A lot of our broadcasting, at least initially, will be automated through a broadcast server so it won’t be live DJs most of the time. 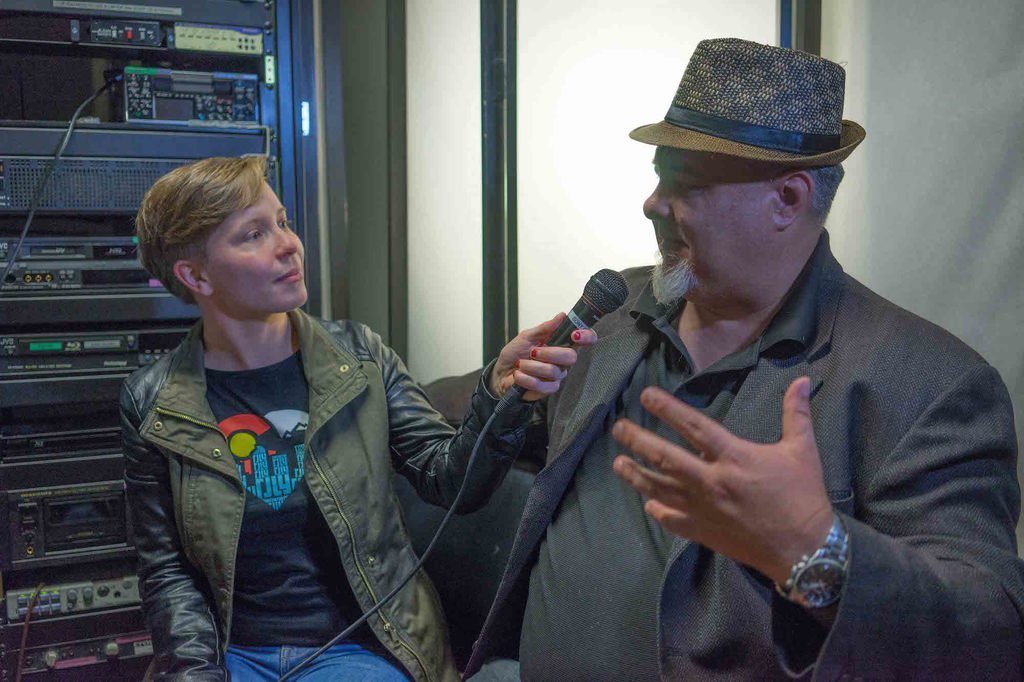 303: So it’s going to be mainly the programs that have been submitted playing on the air?

303: Are you listening to all the programs submitted?

TS: Yeah, we have to listen to every single one.

303: That must require a lot of manpower. How are you guys doing that?

TS: Between DenHac and Open Media we have a lot of volunteers doing it. Also, our receptionist she spends a lot of time listening to it and approving it. She’s listened to a couple 100 songs already…. There never will be gatekeepers here saying this deserves attention and this doesn’t, one of our core values that we don’t give favoritism to one message or one band. We let the community submit and manage their own content.

“Cities with the coolest music scenes don’t happen in a vacuum, It doesn’t just happen. Those cities and those communities really invest in it.” 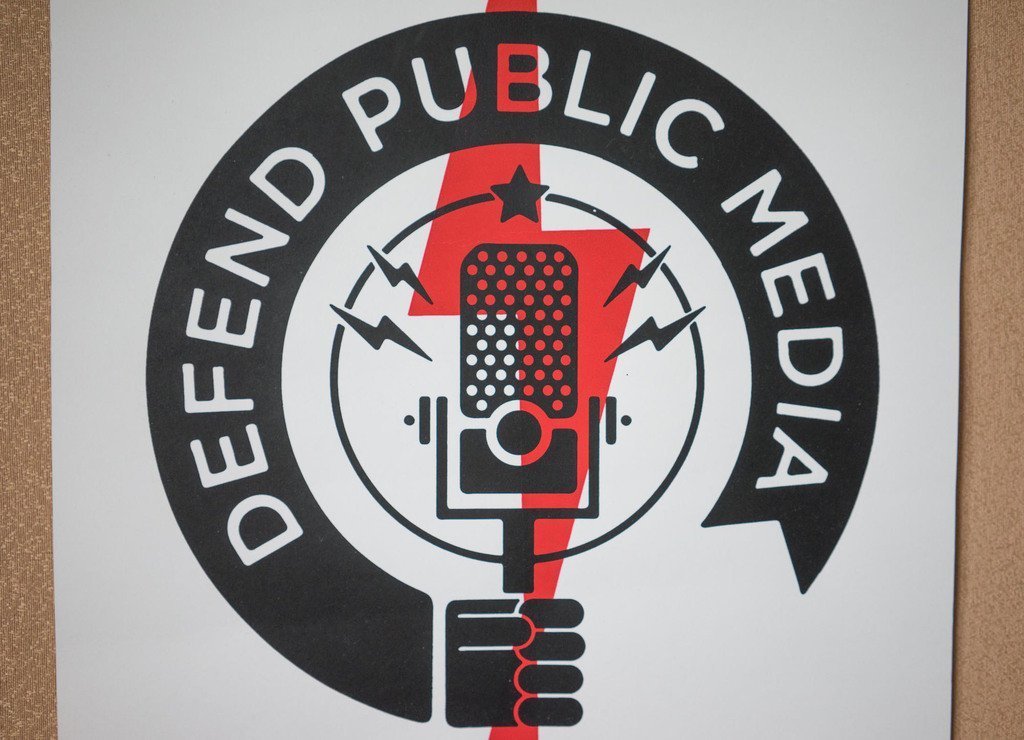 303: In your Denver Post interview you compare Denver to Austin, but said that Denver is not quite there yet with its music scene. Can you elaborate on that?

TS: Cities with the coolest music scenes don’t happen in a vacuum. It doesn’t just happen. Those cities and those communities really invest in it. Sometimes it’s private industry, a good example is Pat Stryker and the Bohemian Foundation up in Fort Collins and what they are doing with their music district they are building this amazing facility to nurture the music scene up there but more often it’s the government that put energies there. When we shutdown Stapleton, was close to the same time Austin shut down their old airport, too. Denver has sold off most that land for development what is the Stapleton Development Austin took all those airplane hangars and took it to cultivate the music and film scene in Austin. So they have 700,000 square space of office and studio space that the city rents them for $1 a year. It’s the kind of thing that really transforms a place like Austin to a second tier city like Los Angeles or New Orleans where a lot of culture is happening. I’d love see Denver do that. I’ve heard some talk about some city properties to be used for similar use. We think this space and its use is a great example of that.

303: Zeppelins, a major developing group in the city known for their projects like The Source, have been a big champion for you. They donated your antenna.

TS: We are so lucky. Low power FM stations are usually relegated to a pretty small listening area since they are limited to 100 watts, which isn’t very much, limited to how high their tower can be, so building one that Mickey Zeppelin donated to us would cost us at least six figures.

TS: Our first two years are rent free, then we will re-evaluate. But it was very generous of Mickey who is a big supporter of local community wants to get content out there not just we are super grateful and we couldn’t have done it without him. Our max height was about four feet below very top of his antenna so if we had to build an antenna that would have been where we would have built it and where we would have built it. It used to be the yellow cab antenna so they did that on purpose. So we will get a lot of coverage on the 1-25 and 1-70 corridors

303: Will your signal change as Denver grows upward?

TS: I have no idea. It’s our first day so we’ve wanted to drive around and seeing how coverage hits the city. We hope it would stretch as far south as Evans but it’s spotty towards Sixth Avenue. But we may be able to resolve some of this conflict with the other [104.7] station. Without that conflicting station, we would be heard pretty much throughout the city limits.

Shawcross explained that they are working with Mile High Sports Radio, the other station on the 104.7 FM  frequency in order to expand their reach. As of now, the map below details where listens will receive coverage. 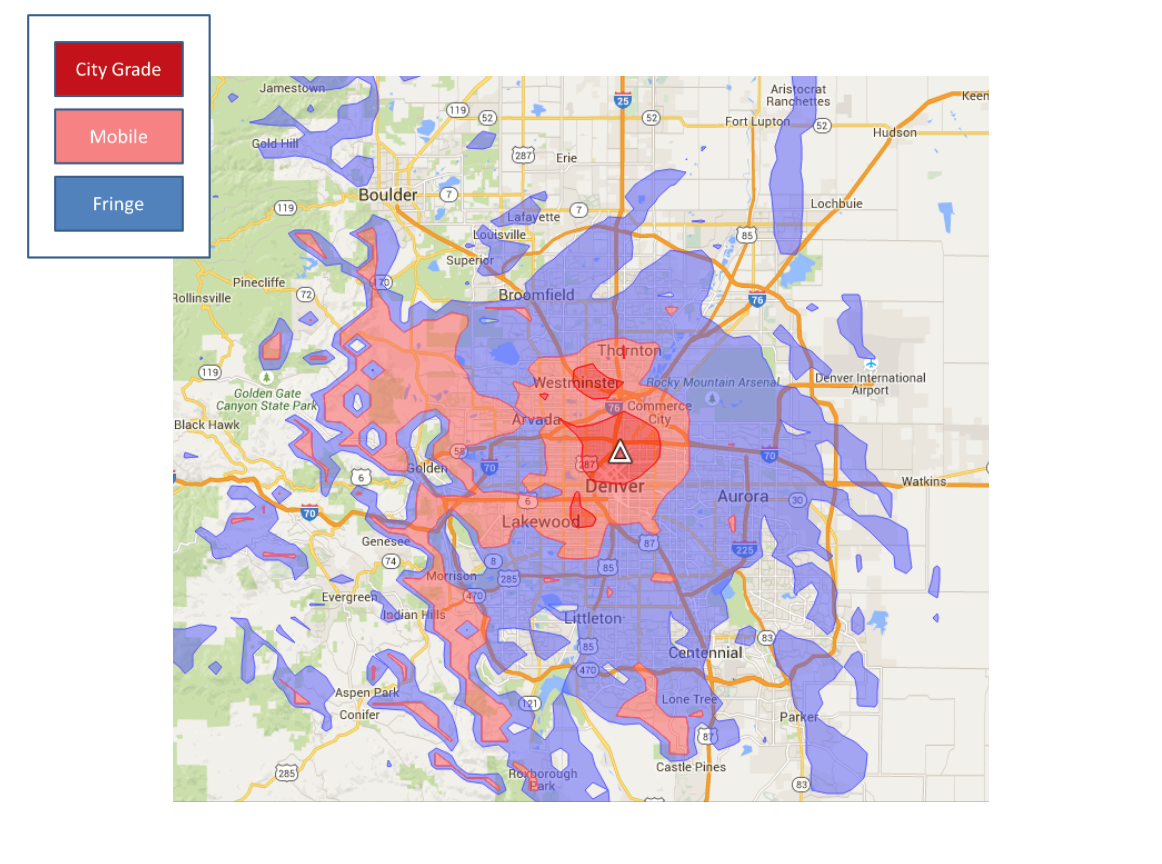