What is a PopSocket? How this Boulder Invention Gained a Cult Following

That’s the first thing you’ll hear if you own a PopSocket. The silver dollar-sized gadget designed primarily as a grip for your smartphone is—if anything—a conversation starter. And while that conversation might be tinged with a sense of apprenhension at first, David Barnett, Boulder resident and PopSocket CEO and founder, explained that’s been the key to its success.

“A certain amount of people have a negative reaction to it, initially, so you have to be talked into trying it… [But] it’s become an organic word of mouth machine that took off… Now we’re experiencing 2,000 percent growth ,and it’s almost entirely word of mouth,” he said.

How has this “nub,” as one converted blogger calls it, become such a success? Even to the point that it’s sold in 45 countries and endorsed by publications such as the Wall Street Journal and NPR and loved by celebrities and figures like Joe Biden,  Serena Williams, Kendall Jenner and Gigi Hadid? According to the Boulder native, it involves a PhD in philosophy, some glue and a lot of convincing. 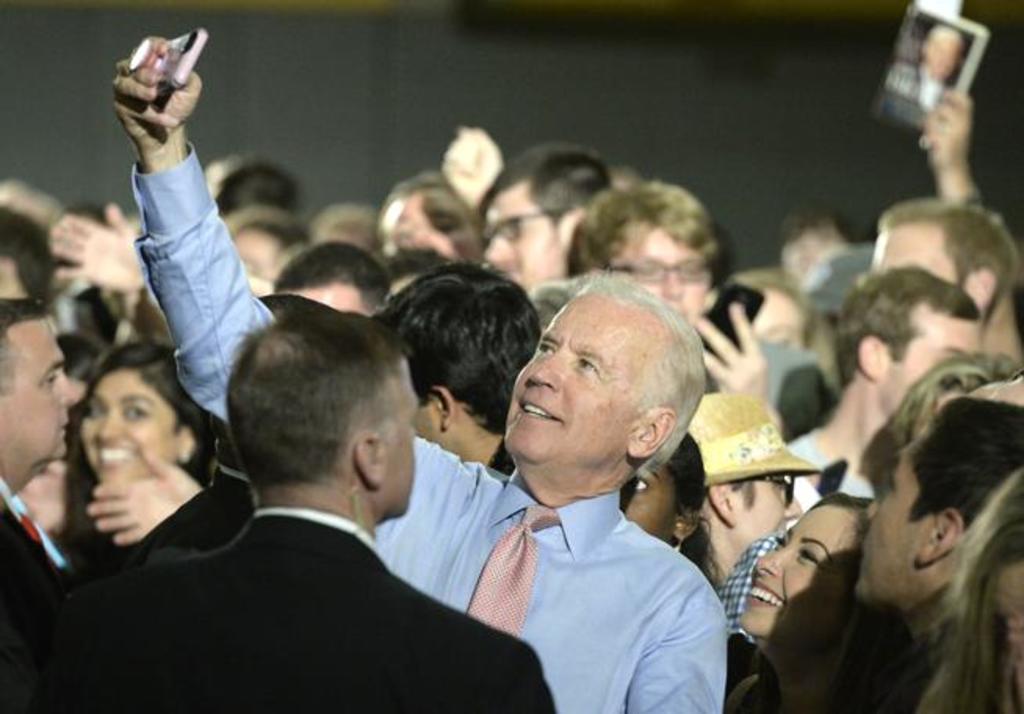 Vice President Joe Biden takes a selfie with students after speaking about sexual violence on campus as part of the Obama administration’s “It’s On Us” campaign Friday at the CU Recreation Center. Photo courtesy of Daily Camera (Jeremy Papasso / Staff Photographer)

“Every time I would take my earbuds out of my pocket they would be a tangled mess,” explained Barnett. “I was fed up.”

This was Barnett’s dilemma back in 2011. As a philosophy professor at the University of Boulder Colorado, it’s unlikely this was the biggest question he was grappling with at the time. However, having a profession dedicated to searching for answers it’s no surprise that Barnett set out to find a fix.

“I drove down to JoAnn Fabric in Boulder to look for a solution, build a solution basically… I glued two huge buttons with a little spacer on the backside in [the] JoAnn Fabric store so I could wrap my headphones around,” said Barnett. “It looked pretty ugly.”

While the initial prototype was far from pretty, the more Barnett worked to fine-tune the project, including making the socket collapsible and useable as a grip, the better response he received.

“I would show it to kids around town and their jaws would just drop and their eyes would get back and they would be like, ‘Oh my god I have to have those.’ I knew it would be a huge hit even though my friends and family all laughed at me,” he said. 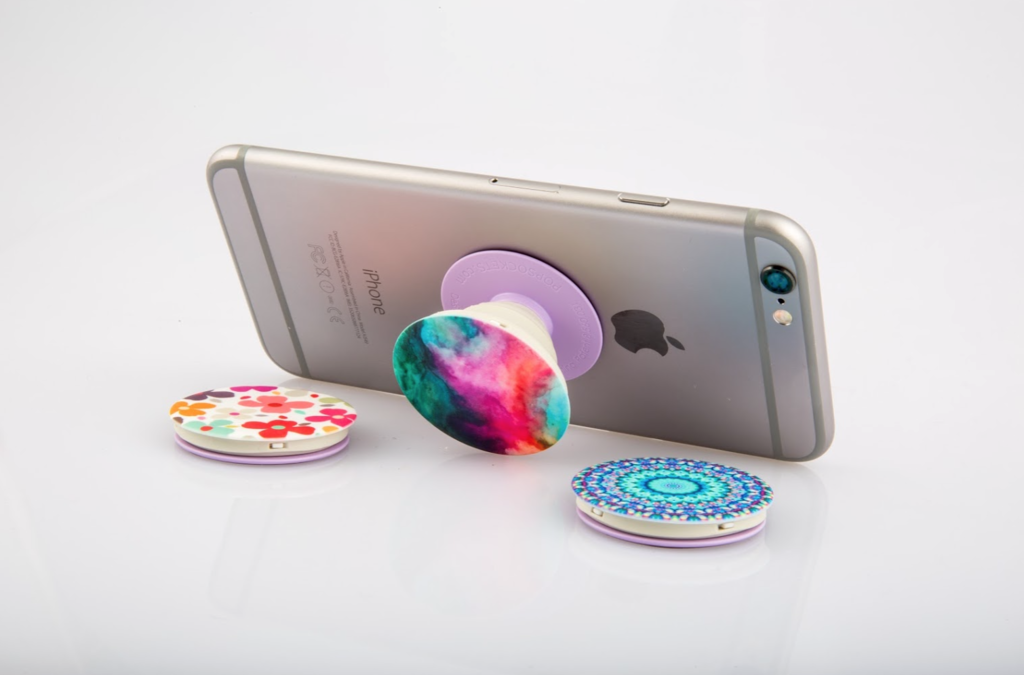 PopSockets can function in many ways, including as a device stand, as a phone grip or wrap for your headphones. You can also customize it with art or logos. Photo courtesy of PopSocket.

With this determination, Barnett decided to spend more time on pursuing his vision, slowly transitioning it from a hobby to potential career. By 2014, he began a Kickstarter, launched a website and raised enough funds to hire two employees to help fulfill orders. But upon launch, no one was buying.

“It was a huge hit, I had crowds around my booth. I had no idea what I was doing”. 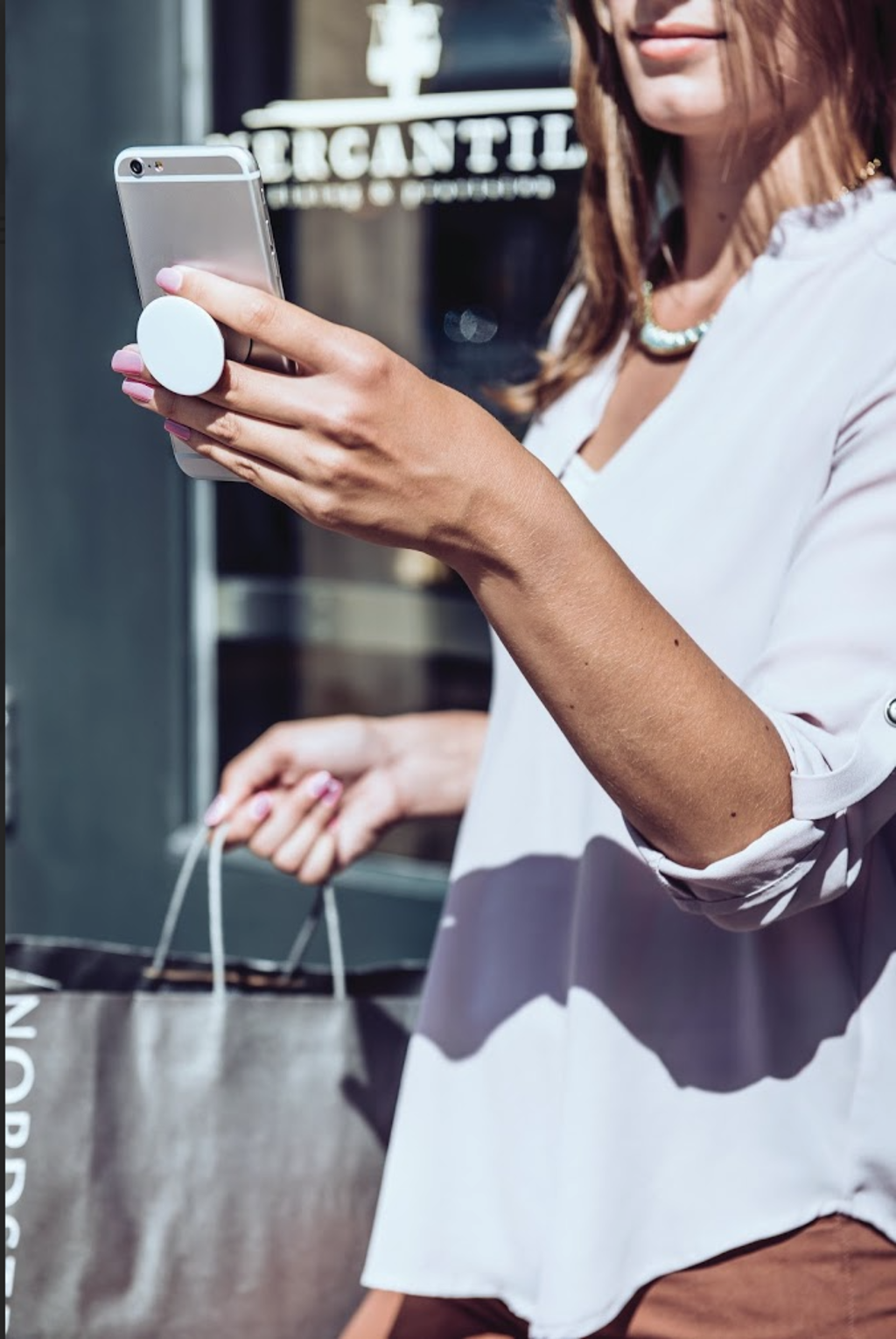 “I had hired these two landscapers, [nicknamed] War Bear and Little Big Hands, to work in my garage to fulfill orders. But nothing happened.”

He quickly realized that the problem wasn’t with the product. Rather, it was because no one understood or knew what it was.

“Of course, nobody would buy PopSockets because nobody knew about PopSockets.”

According to Barnett, here’s where a bit of luck came into play.

Due to a series of manufacturing challenges, including receiving defective products and packaging from his manufacturer, Barnett had to rethink his initial plan of approaching big box stores such as Best Buy. Instead, he focused on the promotional industry.
“I happened on the big trade show for the promotional industry in early 2014… With no preparation, I hopped on a plane and showed the product,” said Barnett. “It was a huge hit, I had crowds around my booth. I had no idea what I was doing. I didn’t understand the terminology for pricing or anything, but I left with a bunch of contacts and a lot of excited buyers and had decent sized orders.”

Those initial buyers included major companies like T-Mobile, Snapchat, Twitter and Vine, all of which bought PopSockets and branded them with their logos and then gave them to their employees or loyal customers or users as gifts and incentives.  This allowed PopSockets to spread like wildfire. 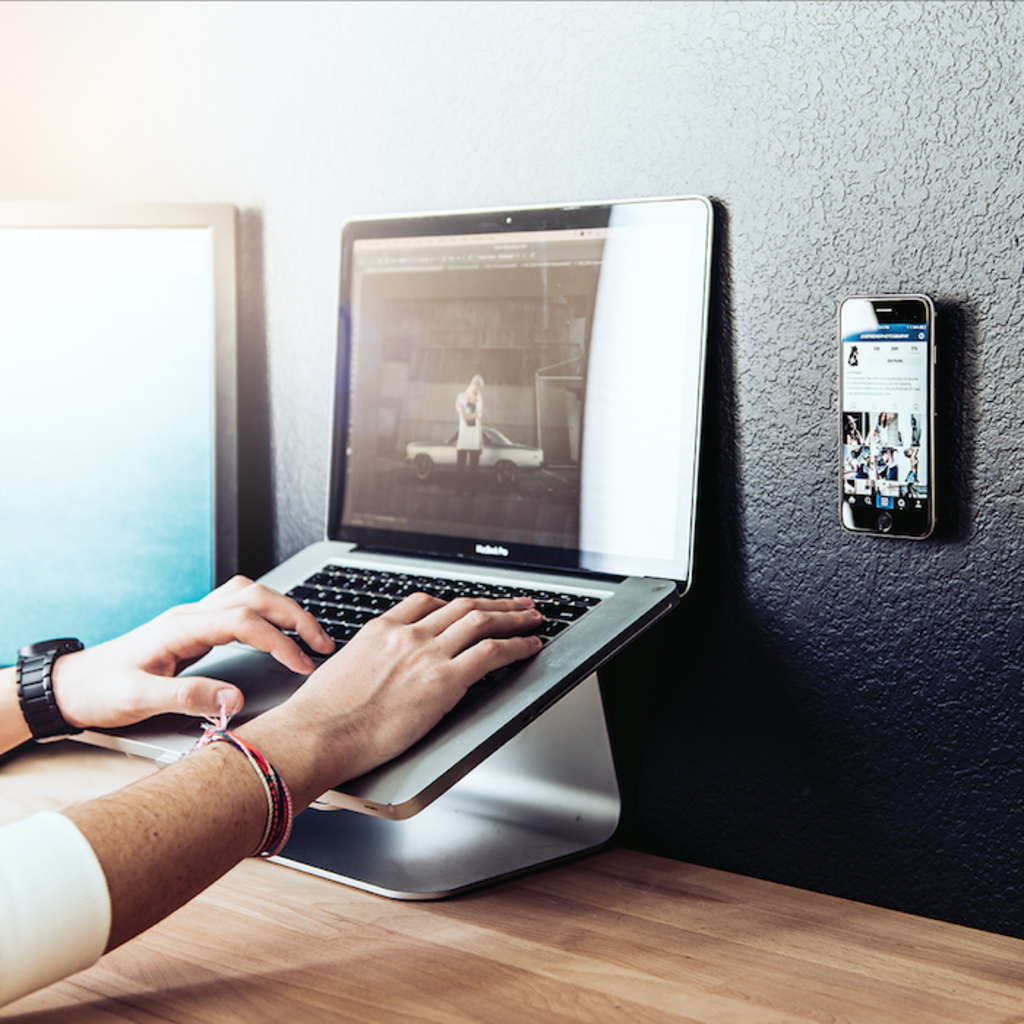 The PopClip. Photo courtesy of PopSocket.

“Those orders ended up getting PopSockets in people’s hand and they get asked every day — ‘What is that?’ The second question is, ‘Where do I get it?'” he said.

Today, PopSocket is growing rapidly with 25 employees in Colorado and Los Angeles. This month, Barnett explained they are ready to move into a brand new office space.

With this growth, Barnett plans to expand the brand with a lineup of new products. Most recently, the PopClip, which attaches to your wall or your car vent, allows your device to stay put for hands-free viewing. There’s also a PopSocket Case made for iPhone that comes with two built in PopSockets.

Barnett also revealed that PopSocket is working on developing an “electronic version” of the PopSocket. But, since the product is still in early development, he’s unable to release any further details.

If it’s anything like the first version of PopSocket, though, it won’t be long before you run into one and find yourself asking, “What’s that?”

Check out Popsockets.com to learn more about the brand and how you can design one of your own.
Author’s Note: 303 Magazine received discounted PopSockets prior to the publishing of this article for promotional purposes. Although, the author previously expressed interest and independently tested PopSocket before any contact was made between the parties.