Although fashion might be a part of its namesake, you’d be mistaken if you thought Denver Fashion Weekend (DFW) was just about clothes. The fast-paced, gender-bending, stereotype-shattering showcase acts as the crucible for hundreds of Denver creatives to collectively present their art. Now five days long, the former one-night-only event currently hosts a small army of hairstylists, makeup artists, designers, and models that wage a biannual artistic crusade in its name. With the return of non-traditional night featuring plus-size, tattooed and 40+ models and the infamous hair show you can always expect something inspiring, strange or beautiful to be on the display. This year was no different, and that’s why 303 Magazine is highlighting the top moments from this season. Read on to get a glimpse at what you missed and let it inspire you to join in on the fun for next year.

Note: There are many more moments, talented designers and stylists from Denver Fashion Weekend not depicted here. Make sure to keep your eyes peeled for the fall DFW Save the Date so you don’t miss out next time.

Celebrity hairstylist Ted Gibson is known for his extensive work on major stars including Angelina Jolie, Anne Hathaway and Lupita Nyong’o and has been featured in every major fashion publication including Vogue, Harper’s Bazaar, Elle, Marie Claire and Vanity Fair. This year, he came to Denver for the Southwest Hairstyling awards where he stole the show with a mesmerizing performance. Gibson gave us a glimpse of what goes on backstage by styling veteran DFW model Antoinette Rose’s hair live on the runway. However, it was far from a tutorial. Set to music, Gibson’s performance was anything but mechanical as he flexed his skills. Methodically combing and teasing, he showed how hairstyling is truly a dance between an artist and his muse. 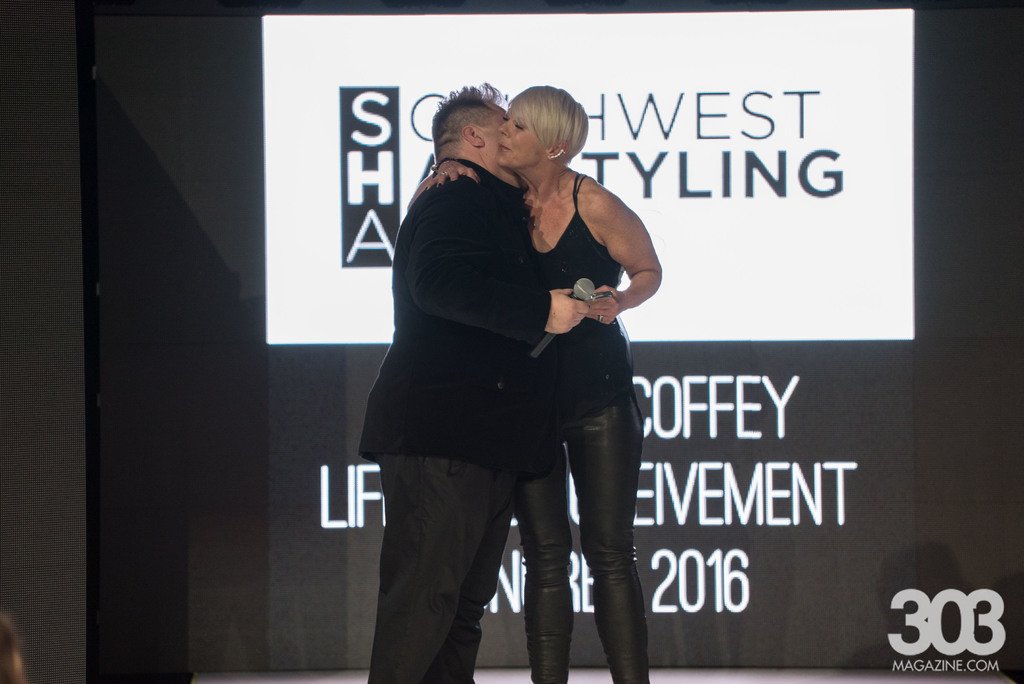 As DFW producer Charlie Price explained, “the nation came to Denver” this past week with the Southwest Hairstyling Awards. Several international celebrity stylists including Gibson and Eden Sassoon were in attendance either to present or accept awards. One of them was Tabatha Coffey, who flew to the Mile High to accept her Lifetime Achievement Award. Known primarily for her work on Bravo as the villainess hairstylist on Shear Genius or the tough love guru on Tabatha’s Take Over, Coffey is one of the most famous faces in the industry. Her heartfelt acceptance of her accolade, premised by an outpouring of admiration from her peers, was an unforgettable moment for anyone who has followed her career.

The Triumphant Return of the Non-traditional Models 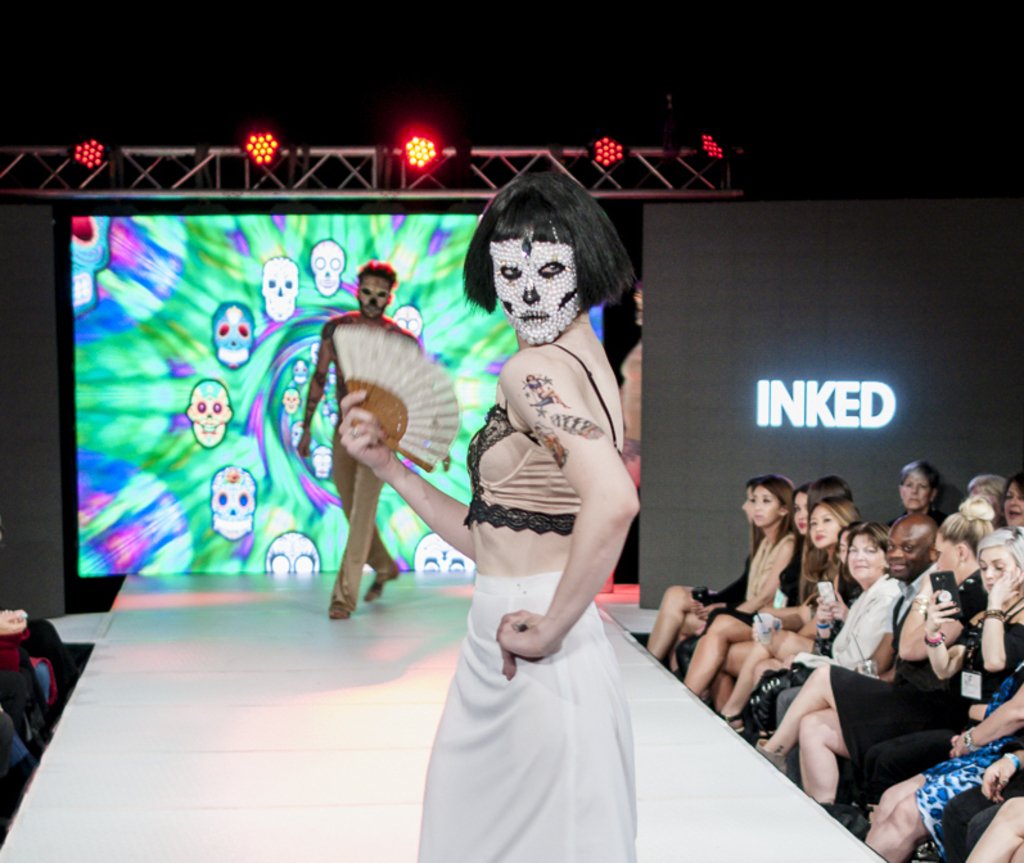 Non-traditional model night returned once again to Denver Fashion Weekend for the second year in a row. Highlighting models that often don’t fit the mold of other city’s fashion weeks, DFW showcased petite, plus-size, tattooed and over-40 models in a beautiful parade of diversity. The tattooed section was arguably the most captivating since the models faces—in compliment to their extensively inked bodies—were painted in makeup reminiscent of Dia De Los Muertos sugar skulls. The finale model stunned with a face encrusted in black and white jewels that left a ghostly impression on the crowd. 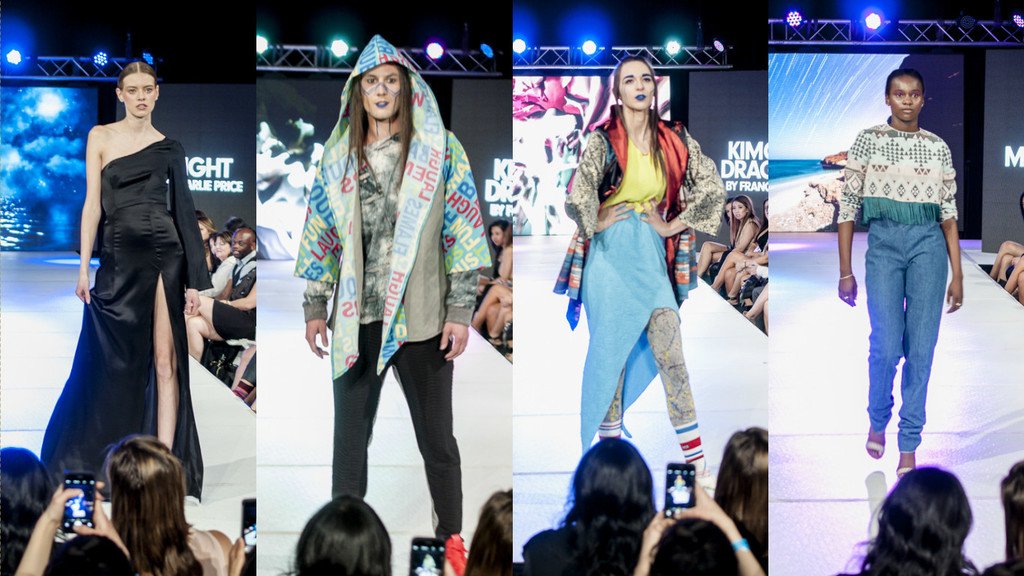 DFW wouldn’t be anything without the local designers that shape our city’s fashion scene. This year’s presenters proved that the Mile High is dedicated to cutting its own path in the fashion world. Styles previously unseen in Denver came in the form of collections from both Kotomi Yoshida and Kimono Dragons. Both designers mixed men’s street style with a futuristic Asiatic edge for a current but eccentric aesthetic. In contrast, Marie Margot Couture and Rachel Marie Hurst both focused on the feminine with elegant looks that included silk evening gowns and Native American patterns, respectively.

Finally, the biggest surprise of the night came from Charlie Price.  As a founder of Denver Fashion Weekend’s Hair Show and award-winning hairstylist, Price’s career is largely viewed in the context of the hair and beauty world. However, this year, Price stunned with his clothing line, NIGHT. The collection consisted of 10 evening wear looks that showed off Price’s tailoring skills. The form-fitting black and navy ensembles mixed luxe elements of sheer and satin that were counterbalanced by minimalistic makeup and hair. The modern silhouettes were selectively revealing, but ultimately incredibly seductive. 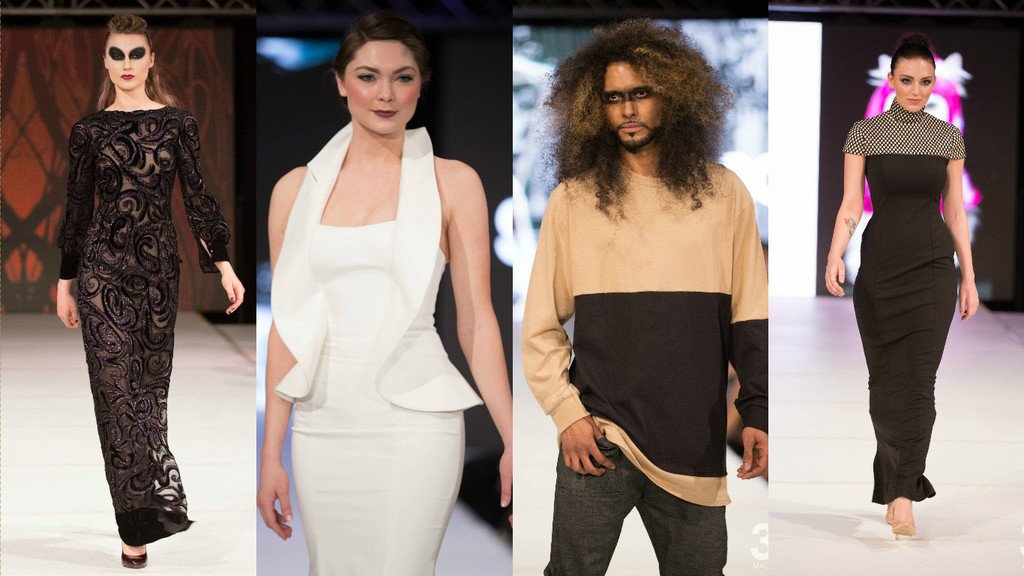 From left Photos by Kyle Cooper

Night Three of Denver Fashion Weekend is typically regarded as the most traditional night of the multi-day affair. Showcasing national designers and local boutiques, the event’s focus is on the fashion while hair and makeup take more of a supporting role. Several designers, though, flipped the script this year with dramatic beauty choices. Both Royal and Georgine darkened the eyes of their models which upped the intensity of the presentation. As for design, both Mark Lloyds and Ily Iley vibed off a ’60s mod feel with black and white ensembles that brought new life to retro wear. Several ready-to-wear collections took the stage with Lions in Four and Velvet Wolf boutiques showcasing a mix of outfits you could pluck from the runway. Lions n Four went more demure with elegant day looks, whereas Velvet Wolf took a punk rock approach with darkly hued looks throughout. Soignee and Kouture represented evening wear, and both made a point to appeal to women of all ages with a mix of modest, elegant frocks to skin tight gowns and separates. Last but not least, Femme Fatale brought the sex appeal with the swimwear this year and showcased a mix of crochet with bright neon. 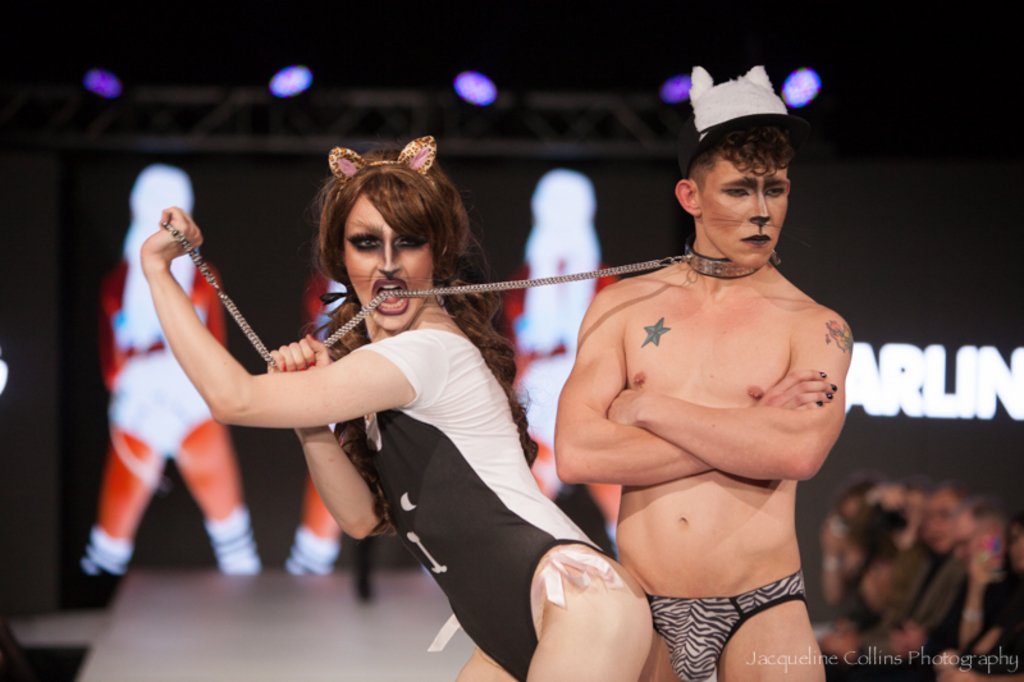 It’s not a secret the Hair Show is the most over-the-top night of Denver Fashion Weekend. The avant-garde, no-holds-barred event is where hair and beauty artists let loose to show their uncensored self. This year, Starling took it to another level with their feline-themed segment featuring models that blurred the line between male and female with an abundance of androgynous models. While clothing was minimal, the attitude was not and the hypersexualized segment remained unapologetic throughout. But that seems to have paid off because, within seconds of the segment starting, everyone was in for the ride. 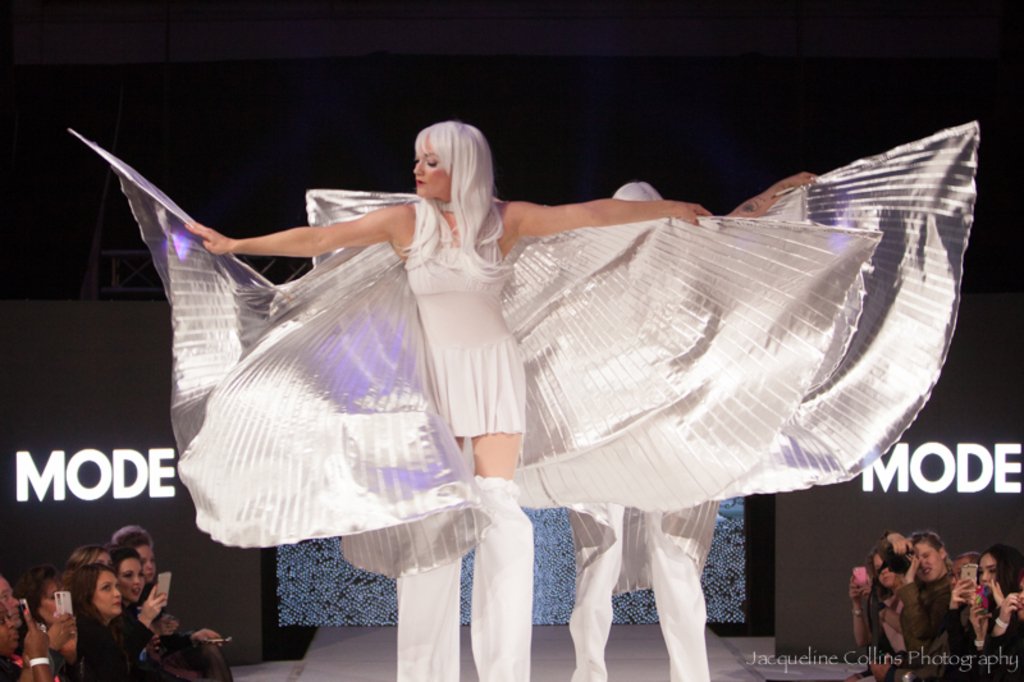 Probably the most nerve-racking moment of the night, Mode’s models wooed the crowded when they took to the runway on stilts. Towering high above the audience the tinseled ladies shimmied metallic wings as the salon’s other models strutted down the walkway. Although they might have been a little uneasy at first, every camera in the house was steadied to snap. 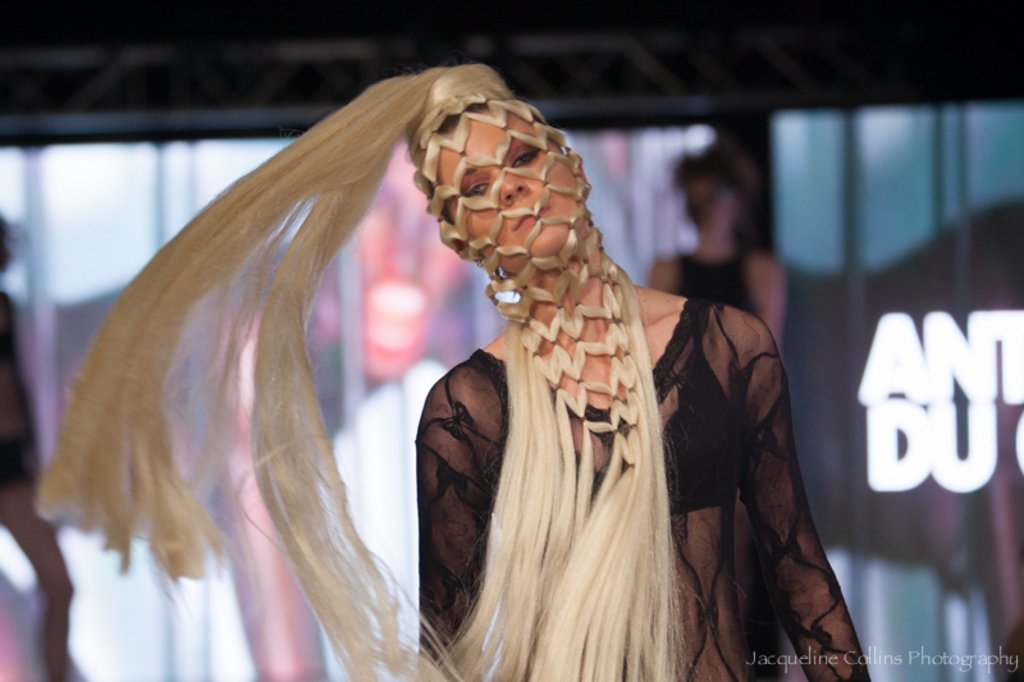 If there was any doubt that the final show of DFW was all about the hair, Antoine Du Chez and El Salon quickly rectified that. Luscious locks took front and center with cascading nets of extensions that transcended hairstyle and became an accessory. El Salon’s overall look, which seemed to mirror a post-apocalyptic vibe with leather and chains, was not sweet or sexy but strong and intimidating. The models for both salons, even though their vision was partially blocked from the hairdo, still crushed it— making for a fun and enticing segment.

Any we missed? Make sure to mention your favorite segment in the moments below.