Seed to Space Part II: Colorado Students and the Future of Food in Space

This is a two-part series exploring the multi-faceted relationships of Warren Tech, a Colorado school redefining vocational education through interactive learning. To read Part I, go here.

Hurtling high above the earth at 17,000 miles an hour, a million pound unblinking mass can be spotted streaking across our night’s sky. The International Space Station (ISS), which appears no bigger than a pinprick amongst a black expanse, is a haven for our existence amongst the harsh conditions of space. Currently, the ISS is trying to decipher how to effectively grow food in this unforgiving environment. The multinational effort, considered the crux of man’s mission to Mars, has the world’s top minds on its development including highly skilled botanists, biologists, astrophysicists—and in a surprising twist, high school students. 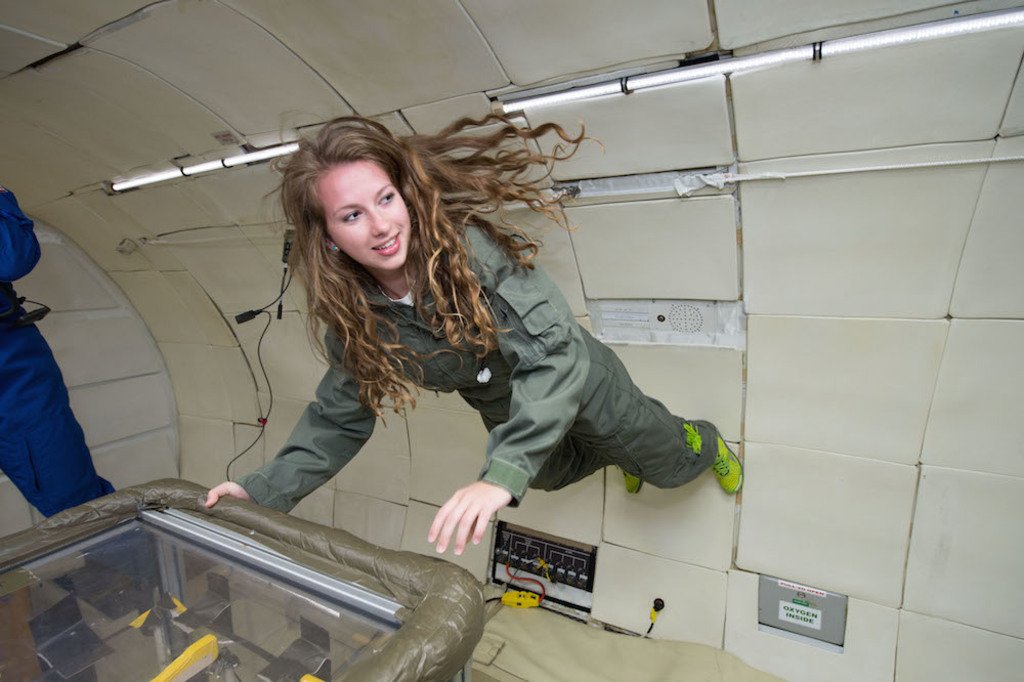 For the last seven years, Warren Tech, a Colorado vocational school, has worked directly with NASA. The program, officially titled HUNCH or “High School Students United with NASA to Create Hardware,” is a mutual partnership where US high school and middle school students construct “cost-effective hardware and soft-goods” for NASA. The organization collaborates with over 100 schools nationwide—including many vocational institutions like Warren Tech. Although common perceptions of vocational education often paint these schools as the proverbial “rug” under which kids are swept, the students who participate in HUNCH receive a hands-on and highly competitive experience.

“I have a hundred kids who want to do this [program],” said Matt Brown, a Warren Tech S2TEM (science, sustainability, technology, engineering, math) teacher at Lakewood High School. “Graduate students at [Colorado School of] Mines are begging to do projects with NASA,” later elaborated Nate Olsen, a S2TEM  teacher at Warren Tech’s main campus, Warren Tech Central. “[Our students] are not even in college yet.”

At Warren Tech, HUNCH pupils are assigned a wide range of obstacles spanning from pressing concerns such as C02 poisoning to more everyday ones, like the need for a more functional tape dispenser. During its eight years of operation, hundreds of products were made for NASA by students, some of which were sent to space. 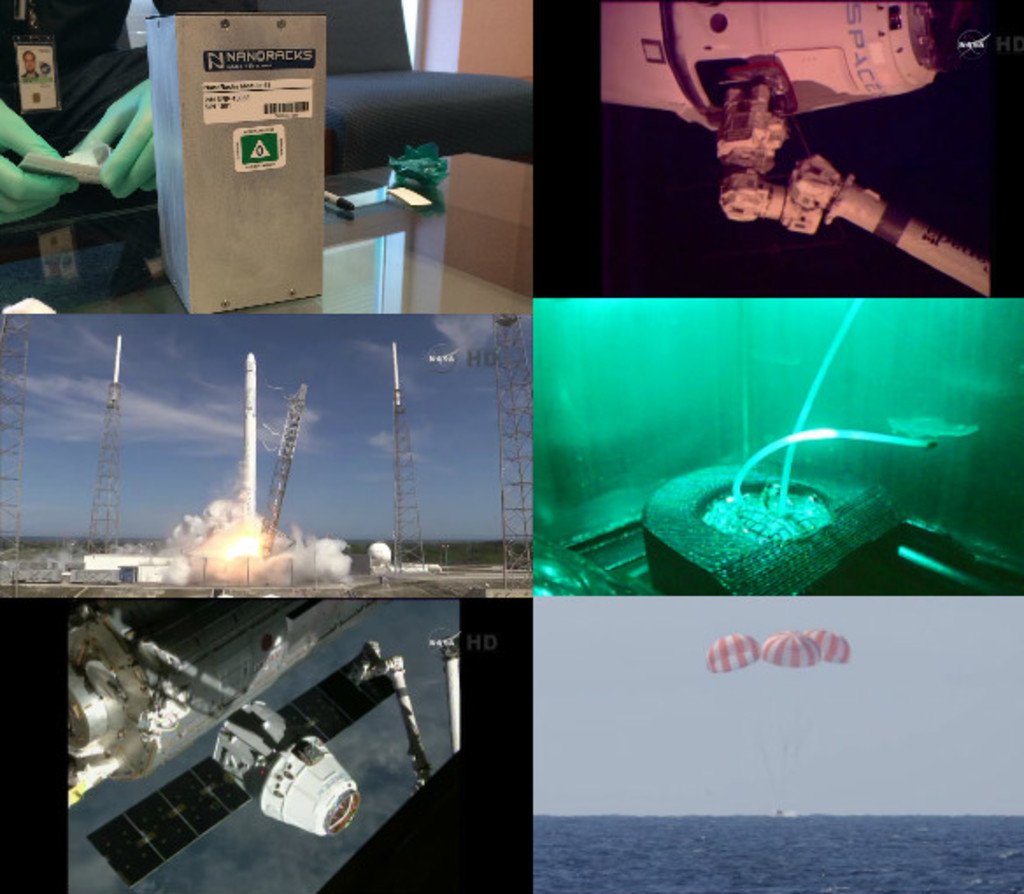 The journey of the HydroFuge to and from the ISS. Photos courtesy of Warren Tech.

In April 2015, a customized module created by juniors and seniors at a Warren Tech’s satellite program at Lakewood High School traveled to the ISS with the intent to grow basil. The module, known as the HydroFuge Growth Chamber, took all seven years of their partnership with NASA to send to space. This involved four trips into microgravity where students experienced weightlessness through zero-gravity flights to test their designs.

The module—which uses a hydroponic water system to create nutrient rich water to feed plants—was first scheduled to fly on ISS for 30 days. Due to interest from NanoRacks (a partner that helped physically get the HydroFuge to ISS), the module was requested to stay on board for 120 days for observation. During this time, the basil sprouted. Eventually, due to a minor mechanical failure caused by a broken bearing, it returned to earth only after three months in space. According to Brown, this has not stopped their research.

“It actually proved the experiment worked,” he said. Brown explained that they believed it was critical for the plant to spin in order to keep water from sticking to the roots in zero gravity. When the bearing broke it stopped spinning and caused the plant to drown, thus confirming their theory.

Brown said NanoRacks is still interested in the design and is even considering fabricating it for mass production.

“We could [make] a commercial version,” said Brown. “ [One] that’s modular and could snap together. You could have a whole room of HydroFuges.”

Warren Tech’s influence on the future of food in space does not end there. Warren Tech Central is home to Bean Acres, a farm managed in partnership with Denver restaurant, the Squeaky Bean. Come later next year, S2TEM facilities will move to the farm’s grounds where students will learn directly from Josh Olsen, co-owner of the Squeaky Bean and a newly anointed technician at Warren Tech Central, to further develop projects with NASA. According to Josh—whose brother is Nate Olsen, the  S2TEM teacher—he hopes to start breeding seeds designed specifically to survive in space.

“We will be saving seeds for breeding in the future,” he said, mentioning that plants with shorter growing periods and the ability to harvest multiple times are crucial for selection.

“This is the first thing to ever cook an egg in microgravity.” 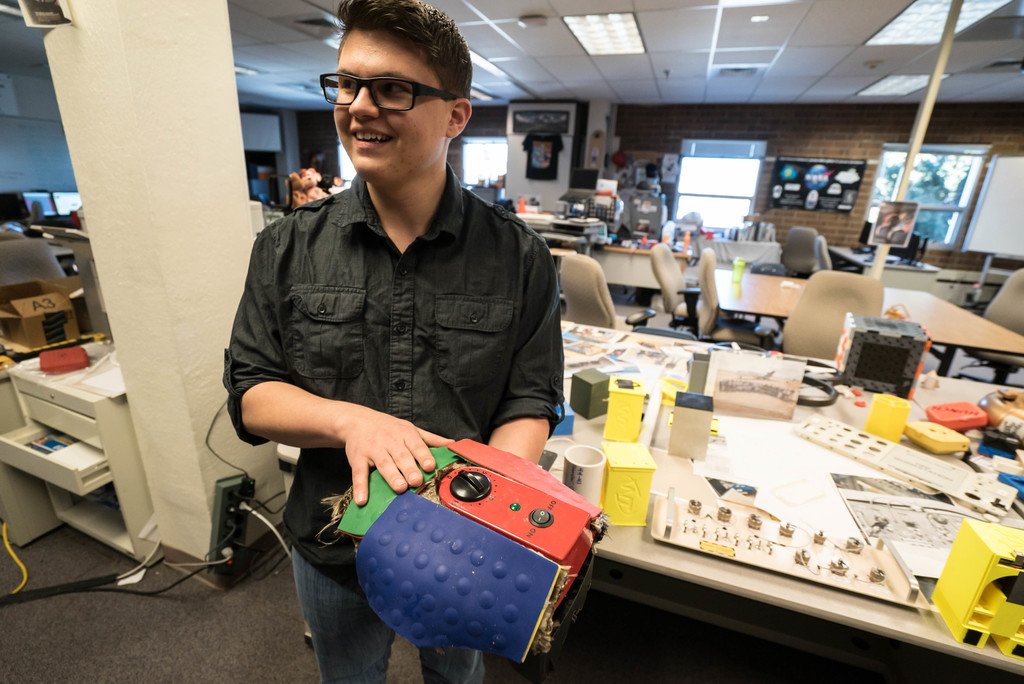 Additionally, Warren Tech Central’s culinary students were recently selected to present a menu to NASA for one of its culinary challenges. If chosen, the menu will be sent to the ISS where it will become a part of the astronauts’ diet. The Colorado team is currently among the top 10 schools headed to Houston this April to compete. During this time, Warren Tech S2TEM juniors and seniors will also present other projects, including a CO2 Scrubber meant to clean the air of an astronaut’s personal quarters of CO2 build up.

For their capstone project, Warren Tech Central has developed a one of a kind innovation. 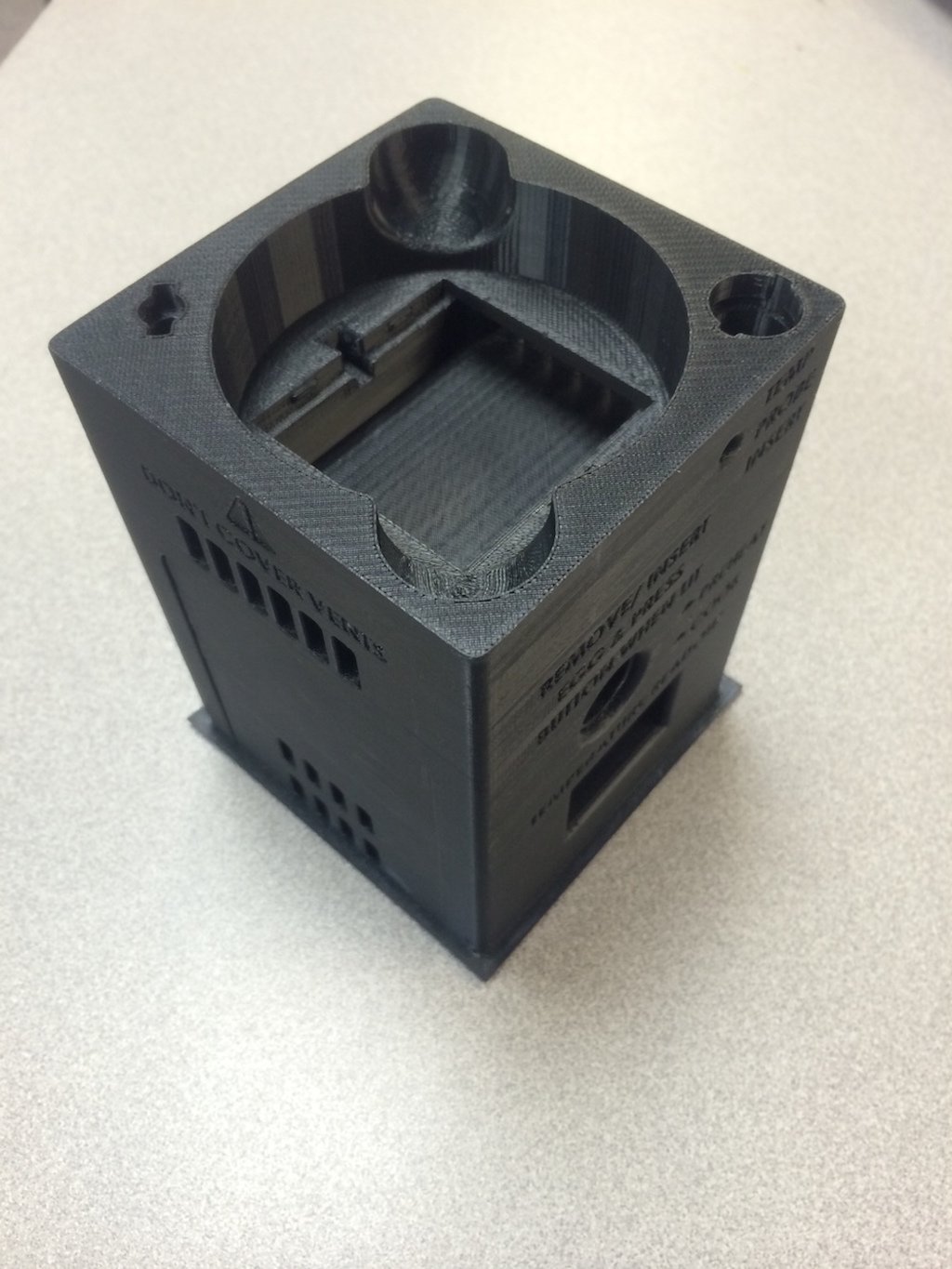 “This is the first thing to ever cook an egg in microgravity,” explained Warren Tech senior, Forrest Havermann, holding a George Foreman Grill padded with haphazardly glued welding mats. “This was prototype number one,” he said, before revealing its successor, a sleek black rectangular box with a detachable metallic well designed to contain the egg.

The impressive evolution of the egg cooker was progressed with feedback given directly from NASA. This included creating a smaller, safer apparatus and decreasing the cooking time.

“[It’s] a relatively simple design, but it works great,” said Havermann. “It’s all metal, so it’s not flammable. NASA is really big on fire [safety].”

The egg cooker has not yet made it to the ISS, but it was one of the last experiments that passed testing in zero-gravity before the flight program ended due to lack of funding. Since ground trials are still a viable option, Warren Tech Central still hopes to send it to the space station.

“There were deadlines and expectations. If it didn’t happen it was NASA saying you missed the deadline.”

“There were deadlines and expectations,” later continued Brown. “If it didn’t happen it was NASA saying you missed the deadline. [That] carries a lot of weight.”

As a result, potential failure is a real concern for students at Warren Tech. Instead of being afraid of poor report cards and parental disapproval, projects they’ve invested time and personal pride might bear the brunt of mishaps. This, according to educators at Warren Tech, is essential in creating an invested workforce that can solve problems not just of current day, but of tomorrow.

“We are working on [developing] jobs that aren’t even created yet,” said Nate.  “These are the jobs of the future. They don’t even exist yet but they might be doing [the work] already.”

On the first day of spring in 2016, Bean Acres at Warren Tech Central is already a lush paradise. Rows of radishes, kale and Swiss chard blossom in vibrant bouquets. Trellises strung 20 feet high welcome the creeping vines of hearty tomato plants, presently bearing plump heirlooms. It is a far cry from the unforgiving environment of space. But come 2030, when a manned mission to Mars is scheduled, a new era of space exploration will be on our horizon and the need for sustainable plant life in space will be crucial. For the students at Warren Tech, imagining a greenhouse like this among the stars is not a thing of fantasy. They’ve sowed the seeds and they’ve already begun to sprout. 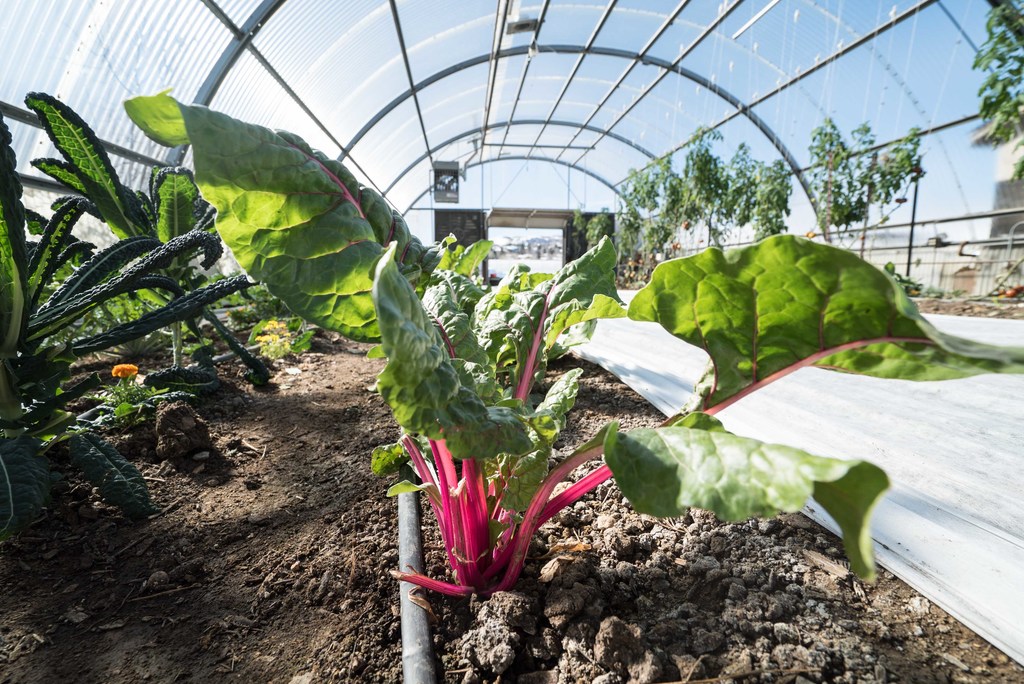 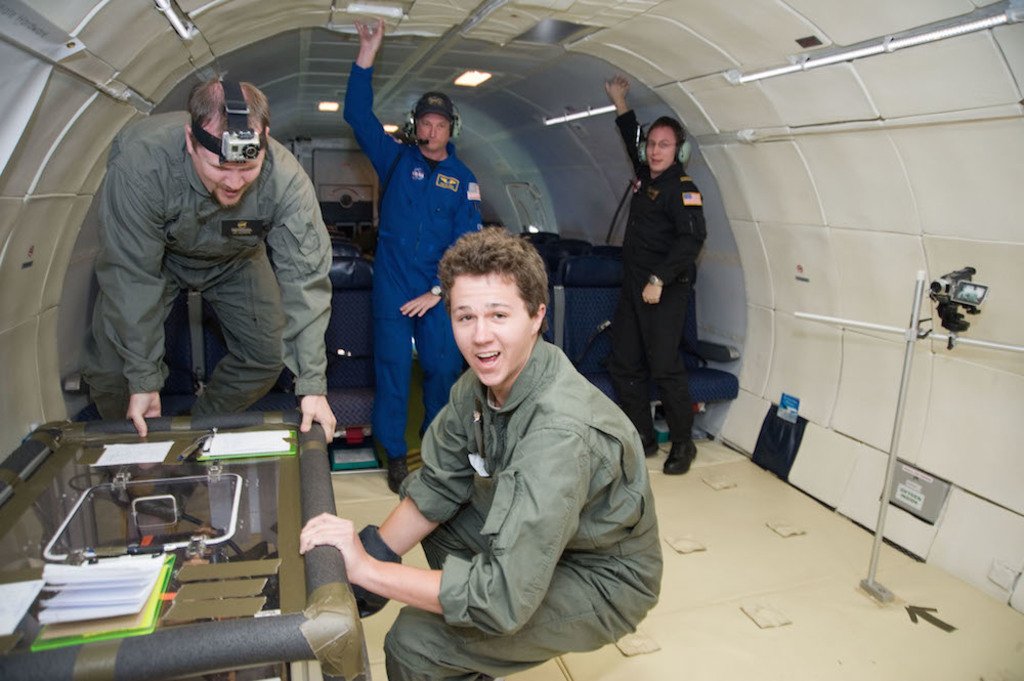 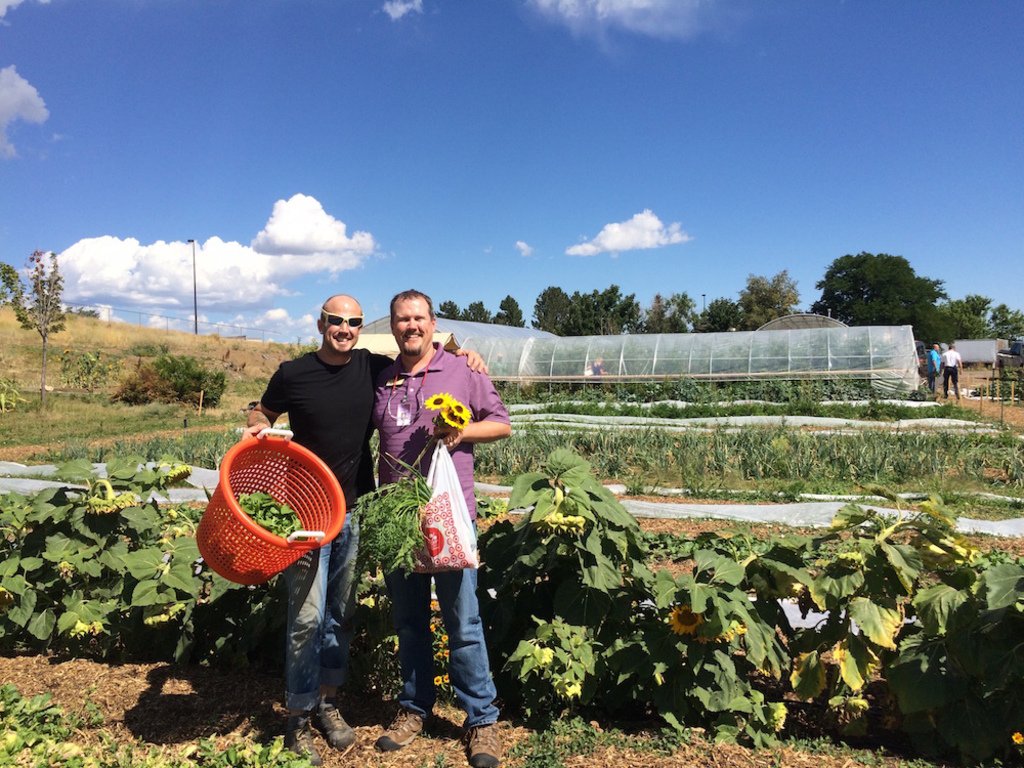