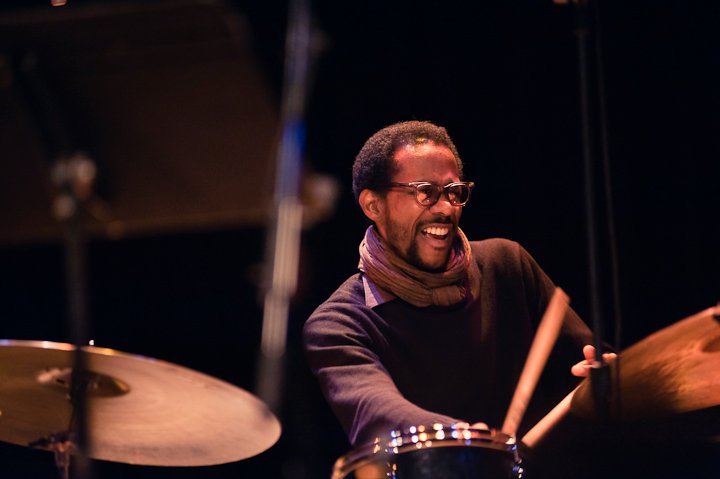 It was a packed house for night one of Brian Blade and the Fellowship Band’s 4-night run and energy was high. Both audience members and the souls on stage were hooting, hollering, tapping their feet and smiling from ear to ear. That’s what happens when Brian Blade steps up to a drum set—people smile.

Maybe it’s this legendary jazz drummer’s own infectious smile that starts a chain of grins. Or perhaps it’s something a bit deeper—perhaps Blade and the Fellowship Band have a gift for the music that’s so transformative, it changes people right there in their seats. Whatever the reason, the imaginative Blade led this group of talented musicians down the rabbit hole and back out again, taking us all on a wild ride through jazz music. The Fellowship Band featured the likes of Jon Cowherd on piano, an ebullient Chris Thomas on bass, Myron Walden on sax and Melvin Butler also on sax.

Dazzle Jazz Club was decked out in their classy holiday adornments, but no ornament took away from the simple grace and dexterity of the musicians. Each man had his moments of spotlight, and each took his turn with exuberance and sophistication, making for chilling solos. With each note, they syncopated closer and closer to perfect unison, until it seemed as if the men were simply reading each other’s minds.

From his 2008 album Seasons of Change (the title track of which he played Monday night) to the singer-songwriter effort of the Mama Rosa album, Blade has no fear of stepping out of the box and giving his tried-and-true fans something new, something to think about.

A highlight of the night was the men playing “Let it Shine,” with a show-stopping breakdown led by Chris Thomas, working in gruff vocals and urging an all-too-eager audience to join in on the singing. That act was met with sheer joy, as every person in that room felt a part of this moment, forever standing still in a perfect second of jazz time. Thanks for letting us shine with you.

You can still grab tickets to tonight’s (12/9) 9pm show here. Thursday at 7 and 9pm are both sold out, which is a testament to how amazing this artist truly is.