What: Black Eye Coffee’s new location in Capitol Hill that moonlights as a bar and restaurant.

For the last year, Black Eye Coffee has kept the details about its second location relatively secret. The team, consisting of five co-owners, expressed that the Capitol Hill outpost would be different. They said it would offer food, maybe even booze. By keeping the same name, it seemed that it would mainly be a coffee shop, but it has turned out to be much more.

“We have an alter ego,” said Steven Waters, co-owner of Black Eye Coffee on a hazy Sunday afternoon at Cap Hill new location. Waters then walked over behind the bar and hooked his finger on the edge of the black shelves. With the added press of his palm, he flipped the large panels to reveal a new shelf filled with liquor bottles. “We’ve dubbed it White Lies,” he said as the large collection of jewel-toned amaros and chartreuses sloshed back and forth. Although Black Eye Cap Hill will still serve coffee, he explained, it is not just a coffee shop, but a full-service bar and restaurant. 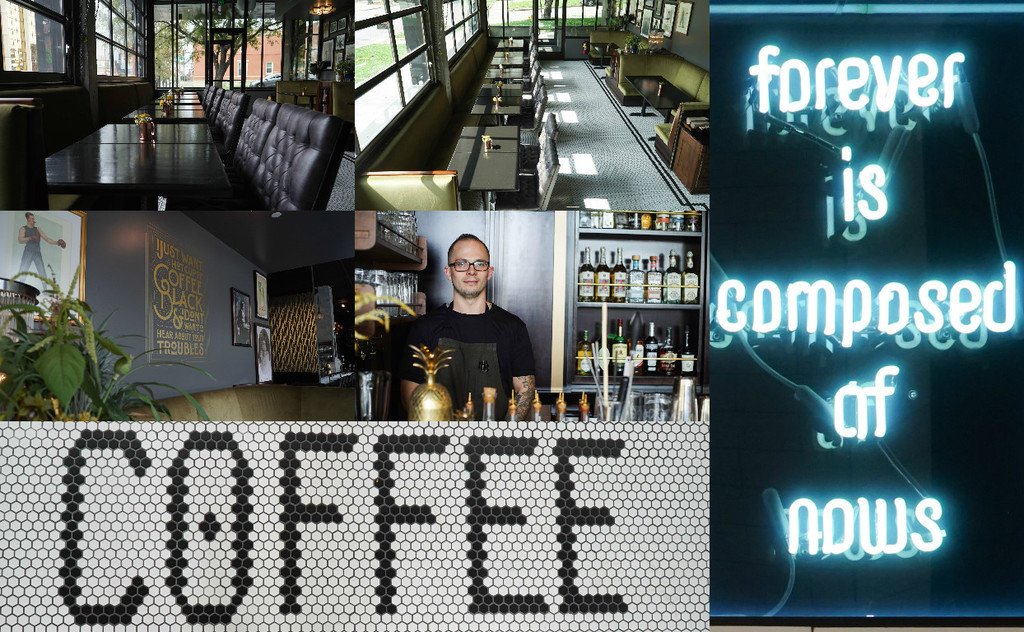 Although the shelves of booze are concealed during the daytime, there are still plenty of clues that expose Black Eye’s second self. Because even on a drab fall morning, Black Eye will gush with sexuality. Characterized by obsidian-colored counters, gilded accents and tessellated tiled floors, this sister location is so beautiful, it’s intimidating. While Waters explained that this location will maintain its community-centered attitude (people can bring their computers at any time and drink coffee up until it closes at 2 a.m.), the space has the sumptuousness of a high-end bar. A big part of that has to do with the art deco theme, which also reflects Black Eye’s deeper intentions:

“We designed it to fit the neighborhood,” said Waters. From the motif of Chevron to the zigzag gold wallpaper, the interior is inspired by a stretch of apartments called Poet’s Row located on the same block.

“All of those buildings have deco design or deco details in them,” explained Waters. Their hopes were to not only create a place that was aesthetically beautiful but one that carried on the architectural tradition of the area.  There are, however, plenty of modern iterations of this theme, too. In the bathroom, you’ll see neon signs of quotes from Emily Dickinson, one of the literaries honored on Poet’s Row. One reads, “Forever is composed of nows,” which appropriately sets the tone for the coffee shops’ nocturnal alter ego.

Pro Tip: There are more 12 pineapples hidden throughout the location, 13 if you count the one tattooed on Waters’ knuckle. “It’s a symbol of hospitality,” he explained. 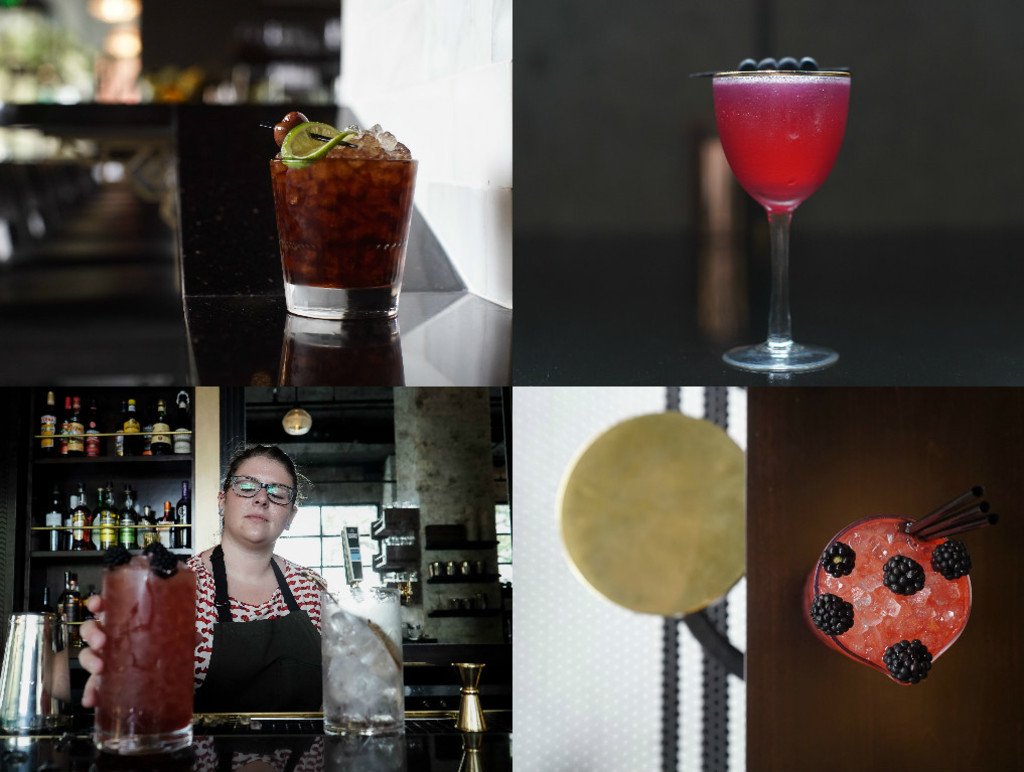 Another indicator of Black Eye’s evolution is its serious beverage program. Spearheaded by Sam Azarow, formerly the National Beverage director for Wolfgang Puck, the drink menu at Black Eye is elaborate. The cocktail menu comes in a 5×7 booklet, emblazoned with a printed etching of two boxers duking it out. Inside you’ll find 20 signature cocktails, 20+ bottles of wines (most of them by the glass), 13 beers (2 ciders with Ratio’s Pilsner on tap). The cocktail section is then appropriately broken down into sections of Featherweight, Welterweight, Middleweight and Heavyweight. The categorization doesn’t have anything to do with the amount of booze in each drink, though. Rather, it stays on topic by grouping them based on the amount of “punch”—or how much booze you can taste—in each cocktail.

“It looks like a girl, but drinks like a woman,” said Azarow of the pinkly pigmented Long, Fatal Love Chase cocktail ($10).

In addition, there are shareable cocktails called “Prize Fighters” ($23) and come in Yarri mixing glasses with several straws. Well balanced but forward on the fruit, these 500 milliliter beasts are dangerously easy to consume and are recommended to share with up to four people—otherwise the drink might earn its name and have you TKO’ed by the end of the night.

Aside from its signature cocktails, the most exciting part of the beverage program is where Black Eye crosses its knowledge of coffee and booze. On the first page of the drink booklet, you’ll find a page titled “Deconstructed Cup of Coffee” (Market Price). The three flights, consisting of something sweet, savory and fatty, is a mix of booze and food—none of which are coffee. The experience will still appeal to coffee geeks as the combination of each component is meant to mimic the experience of drinking a different coffee roast. So the “Kenya” offering—which usually expresses notes of citrus and cocoa—will include a sample of orange, followed by a sherry and finished with a bite of chocolate. Similarly, this is repeated for other roasts like the Ethiopian with a coffee grain Japanese whisky and a Sumatra with Mezcal.

For those who don’t like the idea of a simulated cup of coffee, Boozy Pour Overs feature spirits such as Leopold Bros. Small American Batch Whiskey (on tap) in a pour over of a hand-brewed, single-origin coffee. If anything, this drink is the unofficial libation of Black Eye, because it’s where the coffee shop and bar finally collide. Now, all you have to do is grab a bite to eat.

Pro Tip: Black Eye shares a space and a liquor license with Proper Barber Shop, meaning you can order and drink a cocktail at Proper while getting your haircut. Your libation of choice will even be transported through a hidden safe in Black Eye. 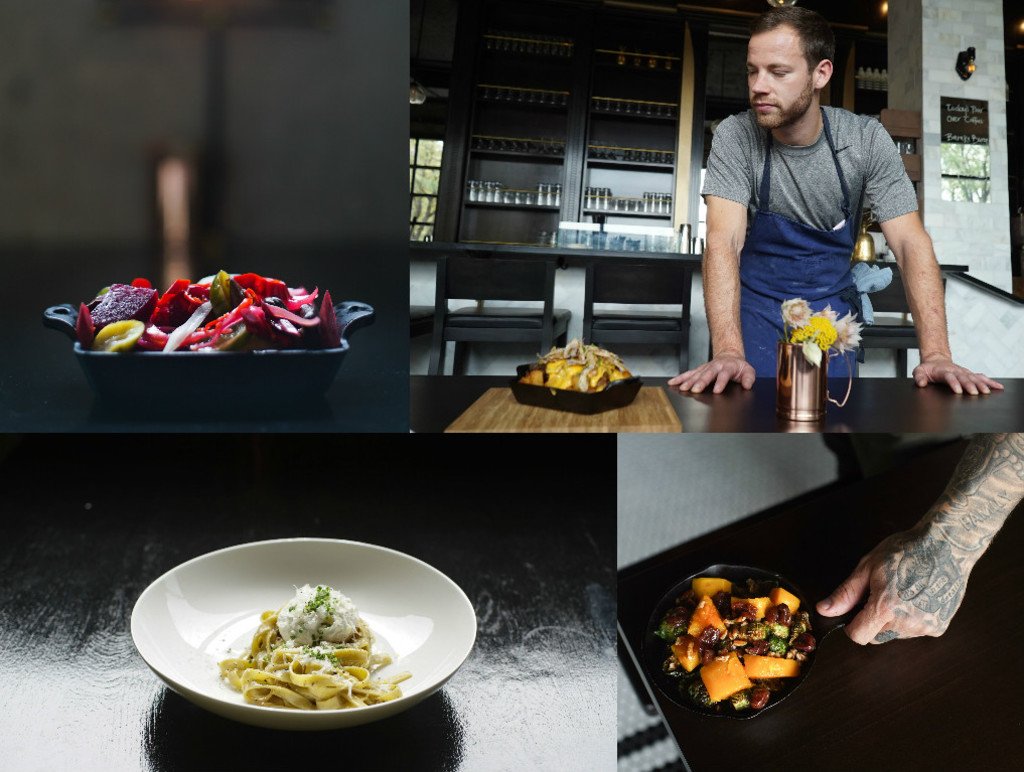 Aside from being a coffee shop and a full-fledged bar, Black Eye is also moonlighting as a restaurant. Like the beverage program, Black Eye isn’t mimicking a cafe with a few things to nosh on either. The menu, created by Alex Figura of Lower48 Kitchen (who was a nominee for People’s Best New Chef in Food & Wine last year), features more dishes than many stand alone restaurants in town. Overall there are five different menus including brunch, lunch, small bites, dinner (with table service) and late night until 1:30 a.m. Items are not too fussy and fit with a couple of trends in town while taking on new ventures. There are Brussel Sprouts & Butternut Squash ($8) to a Housemade Black Pepper Fettuccini ($11) and the do-not-miss Chicken and Biscuits ($11), which is made with confit fried chicken, and served on the brunch and late night menus.

Also in a seemingly impossible twist, Black Eye will make all of its bread and pastries in-house with the hand of executive pastry chef, Alicia Luther. Those treats are available as early as 6 a.m., which brings operating hours to a whopping total of 19 hours per day, all of which food will be served.

The craziest part? The kitchen is tiny.  So how do they produce so much food? Just like the booze, things such as dry goods and linens are hidden in plain sight via built-in compartments scattered throughout the space.

—
“Everything was designed with intention… We tried to think of every single detail,” Waters said on the eve of the opening. It was apparent, after spending the afternoon with Waters, that he had poured over every inch of the space. This included the intimate decor details, to the elaborate storage and the feel of every single seat. “Each section has its own lighting, that are all on dimmers,” explained Waters. He was visibly tired. But through his palpable exhaustion still seeped a deep pride. You could tell that after all this work, he was satisfied. This is not another Black Eye Coffee shop—this is their masterpiece.