What: an outdoor food truck collective and a New Orleans style bar in the RiNo Art District.

When Noah Price opened his first business in RiNo, the area was unlike what it is today. “Back when we started Crema six years ago, there was hardly anything up here, as far as food and retail,” he explained.

For years, his now iconic coffee shop sat estranged on a block littered with deserted lots. Places for community gathering such as local watering holes were few and far between, and the street–a one way that only took you towards downtown–acted as an impediment for further exploration.

“There were only a few customer-facing businesses,” said Jonathan Power, co-owner at Crema, during a conversation about his recently opened Bar Fausto. “A number of people thought we were crazy opening up down here,” he explained, while commenting that many were concerned the lack of traffic might impact sales.

But today, on the same stretch of the now two-way street, uncertainty of exposure is the farthest thing from anyone’s mind. Just within the last year, Larimer Street has reached a fever pitch of openings with new restaurants, breweries and businesses popping up almost weekly. As a testament to their love of the area, both Price and Power (in regards to his own concepts, as Power is not involved with Finn’s Manor) aren’t fleeing the area in order to cultivate less-tended pastures. Rather, Price, along with Thomas Taylor and Robert Sickler, who are partners in Finn’s Manor, are looking to further develop the neighborhood by taking a former auto-parts yard, dubbed an “eyesore” by the community, and turn it into a refuge for one of our city’s most diverse and fluid culinary talents: local food trucks. 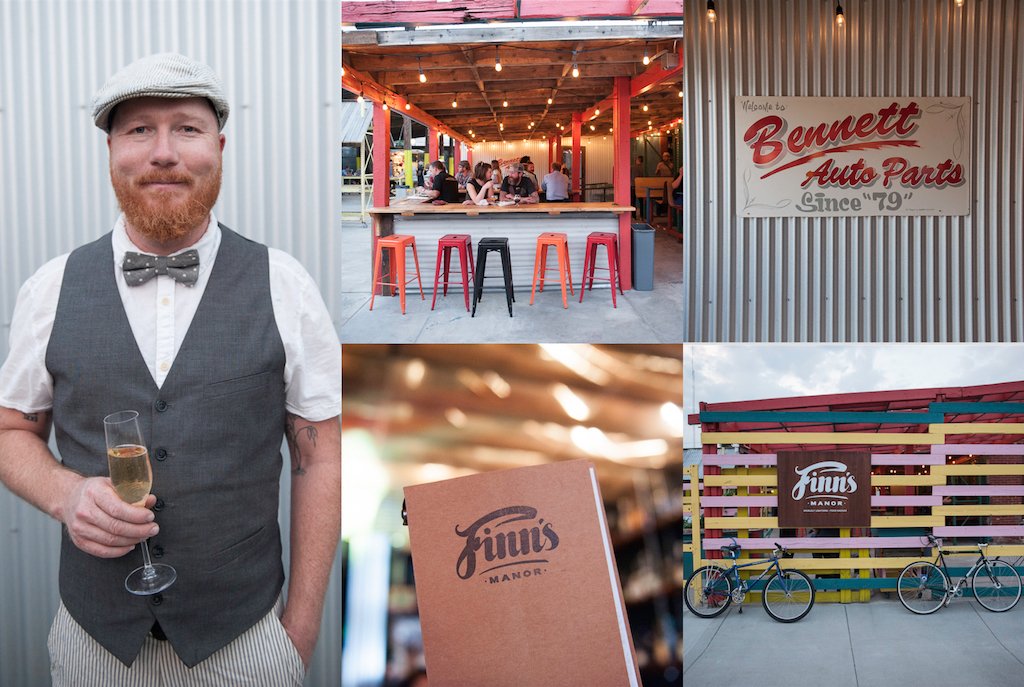 Built from found materials like industrial shelving, corrugated metal sheets and weathered lumber, Finn’s Manor attempts to retain the vibe of Bennet’s Auto Salvage. But aside from the usage of reclaimed materials, Finn’s doesn’t look like many other places in Denver. The hybrid indoor-outdoor space, encapsulated by its candy-colored fence, feels like a hidden commune–but one built for up-and-coming entrepreneurs.

“There aren’t many places for food trucks to be in Denver on a regular basis,” said Price. “So we wanted to have an incubator to help them get off the ground.”

That’s why the buildout includes amenities for the tenants such as centralized power (instead of generators), trash, compost, recycling and two massive bathrooms, he explained. Currently there are four “anchor” trucks, with one rotating tenant. Unlike other incubator projects, though, there isn’t an official time on tenants’ leases. According to the participants, however, no one is looking to go anywhere anytime soon. 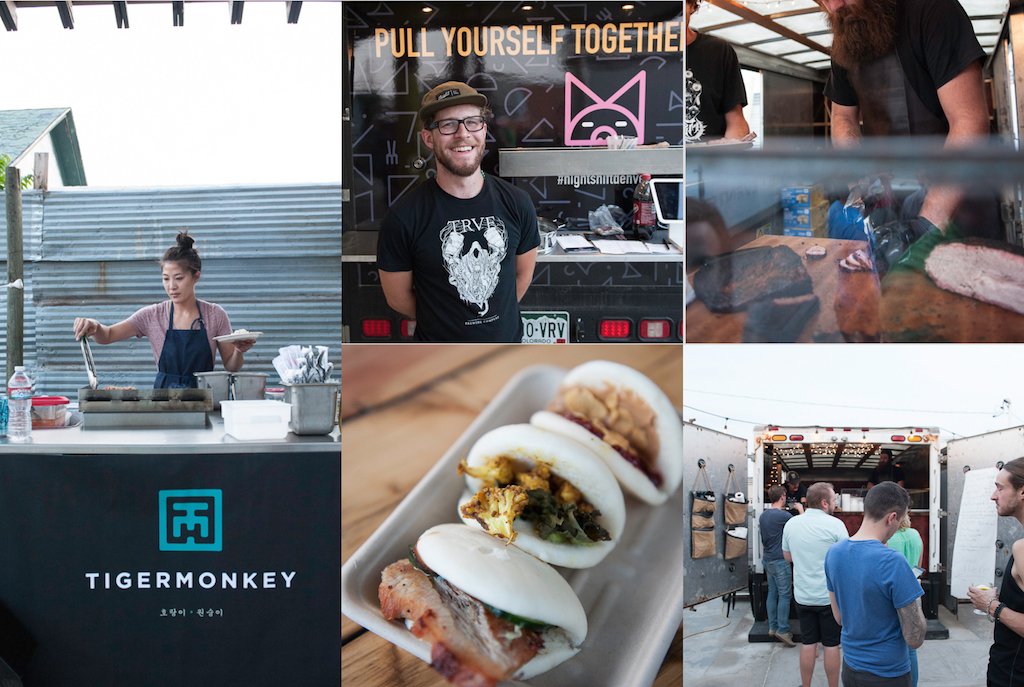 “I’m hoping to be here as long as I can,” said Susi Kim, owner and operator of Tiger Monkey food cart. Her mobile kitchen, which offers Korean-inspired plates with an emphasis on fresh vegetables, is one of the regularly scheduled tenants at Finn’s. She serves alongside three others: OwlBear Barbecue, a central Texas barbecue truck that uses a massive in-house smoker to smoke its meats for 18 hours using Colorado gambrel oak; A Taste of the Philippines, a Filipino food cart (that custom-built its truck for this space); Night Shift, which has a spin on late night street foods, including different renditions of steamed buns, and one yet-to-be-named concept.

According to Price, another reason they wanted to highlight food trucks was to provide more approachable meals through an accessible price point. “We don’t have any grocery stores up here, yet,” said Price. “So it’s been a response to this neighborhood, as it is a bit of a food desert, so there’s a lot of demand for this… The feedback has been incredible.” 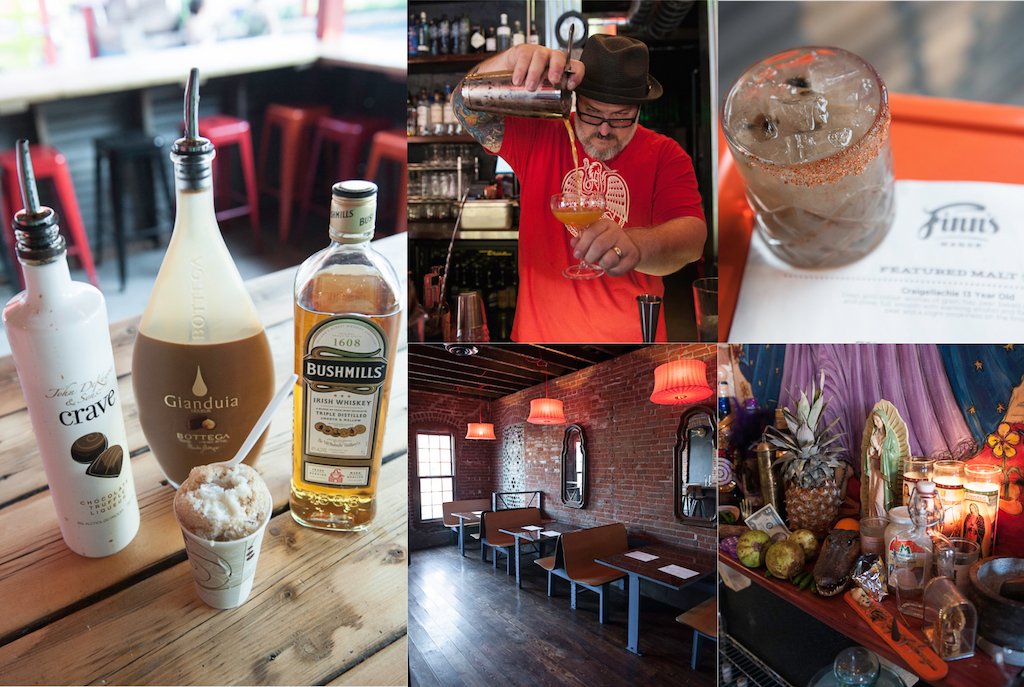 Aside from the food trucks and the unique design of the space, a huge draw of Finn’s Manor is undeniably the bar and the beverage program. Conceptualized by Sickler, a former “master of whiskey” for Diageo, with beer input from Thomas, an esteemed beer collector and accomplished home brewer, the bar at Finn’s Manor is eclectic. The indoor area, formerly a red brick house built in the 1800s, has been stylized to vibe off the spiritual, voodoo aesthetic of the bayou. Inside you’ll find an altar for the Haitian goddess of love and beauty made by artist Alexei Kazantsev along with a handful of southern folk art pieces created by Lennie Jones, an acclaimed self-taught artist from the Florida Everglades.

“It’s kind of a mystical New Orleans, Caribbean botanica, then you go outside and it’s like a fun Austin outdoor caravan,” said Sickler.

The spirits program focuses mainly on rum and whiskey, and offers an array of diverse drinks such as alcoholic snowballs ($5), specially made shots ($5) and craft cocktails ($8-15). There is also be a robust beer program from Thomas, and a small but unique wine selection picked by Price. But in addition to these boozy offerings, Sickler expressed a strong desire to provide a wide array of non-alcoholic beverages such as exotic juices, ciders, local sodas, smoothies and over 42 teas sourced from all over the world.

“It’s important to me for someone who values people’s choices to maintain a cleanse by having a litany of offerings for people who want something non-alcoholic without just drinking tonic or soda,” said Sickler.

In addition, many of these fresh juices and ciders are incorporated into the cocktails. For example the Garcia’s Garden ($10) cocktail had a sparkling pineapple wine that, when sampled solo, tasted like a sweet but very dry prosecco. “I’m going after some more unique flavors to tantalize people’s palates,” said Sickler.

For Price and friends, Finn’s Manor is just another piece in the puzzle in their continued effort to grow RiNo’s dining scene. “We’ve spent a lot of time and effort in making it pretty and making it a better place,” said Price in reference to Finn’s. While there’s no doubt that Price and his fellow RiNo renegades have been the catalyst for development in this area, it’ll be interesting to see how this newest concept pans out. Currently, it’s unclear how long each tenant will plan to stay, which could be a hinderance or give them the ability to be more malleable with patrons’ preferences. Also, with Denver’s temperamental weather (we might be in for a rough winter), we will see if people will still come to eat during the colder months, or if the main draw will become the bar. But it’s refreshing to see an aesthetic that’s not so cookie cutter for the city. It’s likely, though, that during the last few hot weeks we have left, Finn’s will be the place many people will want to spend their nights. So head down there before the cooler weather sets in and grab a pineapple wine cocktail and some Texas barbecue, because as of now, there aren’t too many places in Denver where one can do that.