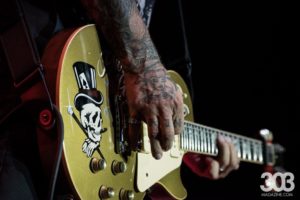 Wednesday night floods were commonplace at the beginning of the summer, but these days’ things haven’t been flowing as much. That, however, took a turn for the best when legendary rockers Social Distortion brought streams of fans gushing into the Fillmore. T-shirts of all faded shades and random tears from various decades and phases of the band darted through the crowd. Tattoos of the iconic dancing skeleton decorated wrists and shoulders, serving as an ice breaker to conversations that played out in the beer lines. 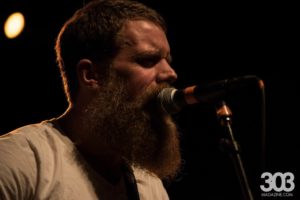 Colorado favorite Drag the River, from Fort Collins, was the first act of the night. Things had kicked off early, putting following up act Nikki Lane on the stage before nine. The female twanger bedazzled with “Out of My Mind” and “Right Time.” The adorably dressed Nashville native and her band retreated from the stage a little before ten and it was time for the grand unveiling of the main performance.

After restroom visits and refreshment purchases were made, the lights dimmed and it was time to find your most ideal place to wave your limbs for the next two hours. “Gimme Shelter” penetrated the airwaves as much as it possibly could over the sounds of the screaming patrons. The backdrop fell down against white and red lights, portraying a simple banner of the band name. As each member grabbed their instruments, the Rolling Stones were pushed out of the speakers and the headliners were ready to show that the decades of time have not changed anything. 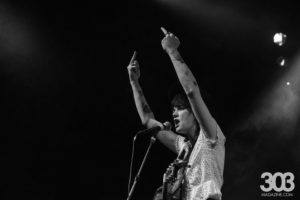 “So Far Away” kicked off the night, prompting the majority of arms in the audience to form the neck of an air guitar. “Let it Be Me,” prompted a rant from front man Mike Ness on the celebration of the 25th year that the album Social Distortion has been a favorite of Social D fans everywhere. 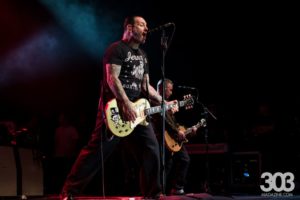 “Story of my Life,” and “Sick Boy,” caused every mouth in the joint to holler the lyrics straight out from the gut, and not long after Mike Ness gifted the crowd with a threat to choke a few of them. “She’s a Knockout,” raged into a rant based on influence, influences on their music, music taste, and then into talk of a song that Mike has been listening to since he was four years old, a revisit to The Rolling Stones in covering “Wild Horses.”

“This Time Darlin’” served as a nice combination to another rant about love and heartbreak, and “Far Behind” accompanied a long colloquy on fake friendships. After these broadcasts, the fellows withdrew from the spotlight for a brief break.

After a few taunting moments, the band hopped back into the eyes of the spectators and poured in their ears a rendition of “Don’t Drag Me Down” to open their encore set.

Oh, you want to hear a Johnny Cash song, I understand.” 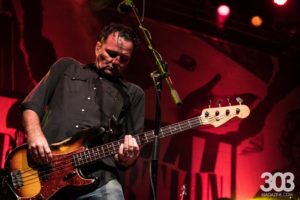 “Folsom Prison Blues” took off, and the screams from the crowd indicated that this song was in fact the correct song they wanted to hear. From one cover to the next, they then rocked in to the infamous and definitive Social D cover, “Ring of Fire.”

After each member of the band was introduced, adieus were bid to the Denver house. The legendary show was over and the various Mohawks, knee high boots, and various band tee shirts made their way out onto the great Colfax Avenue, tossing PBR cans and air jamming all the way.