What: First Draft – Pour Your Own Taproom and Kitchen

A brewery or taproom is typically a place to enjoy a pint or two, relax, and go along with the pace of the bartender and drinking crowd. Sometimes though, one stares longingly at a row of glistening chrome taps, or thumbs through a veritable booklet of drafts, and wishes he or she could just try everything and not have to corral the ever-elusive bartender for a sampling of beers. Being one of those sometimes fickle-minded souls, I was both excited and apprehensive when I heard about First Draft, a “pour-your-own” taproom and kitchen. 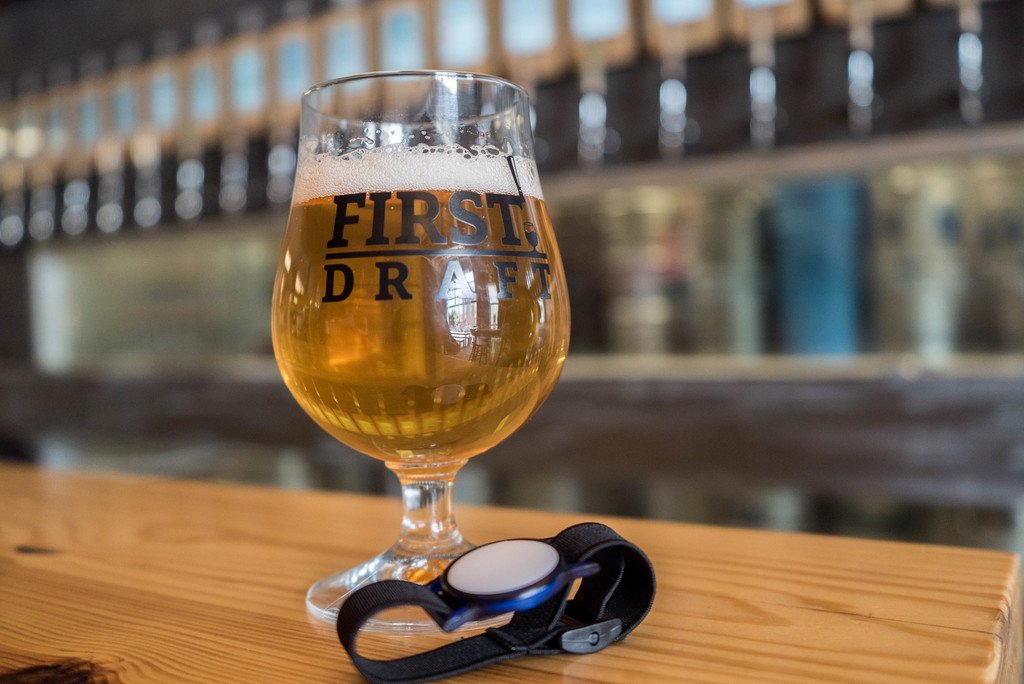 First Draft allows patrons to choose from 40 beers, ciders and wines. A bracelet using iPourIt technology allows users to pour their own drinks, track their pricing, and provides unlimited flexibility in drink variety and portion size.

As both a beer writer and someone who loves to try the new offerings from the continually expanding beer world, a place that offers 40 taps and the ability to choose your own drink size sounds like the optimal spot to sample a wide range of alcoholic beverages. Similar establishments have lured drinkers by their alleged eclectic selections and 100-plus taps, only to find out most are very widely available brews, along with every possible macro, which takes up even more precious space on the menu. First Draft has taken a different approach however, by offering a significant amount of choices that aren’t necessarily the most widely known, but of the highest quality. 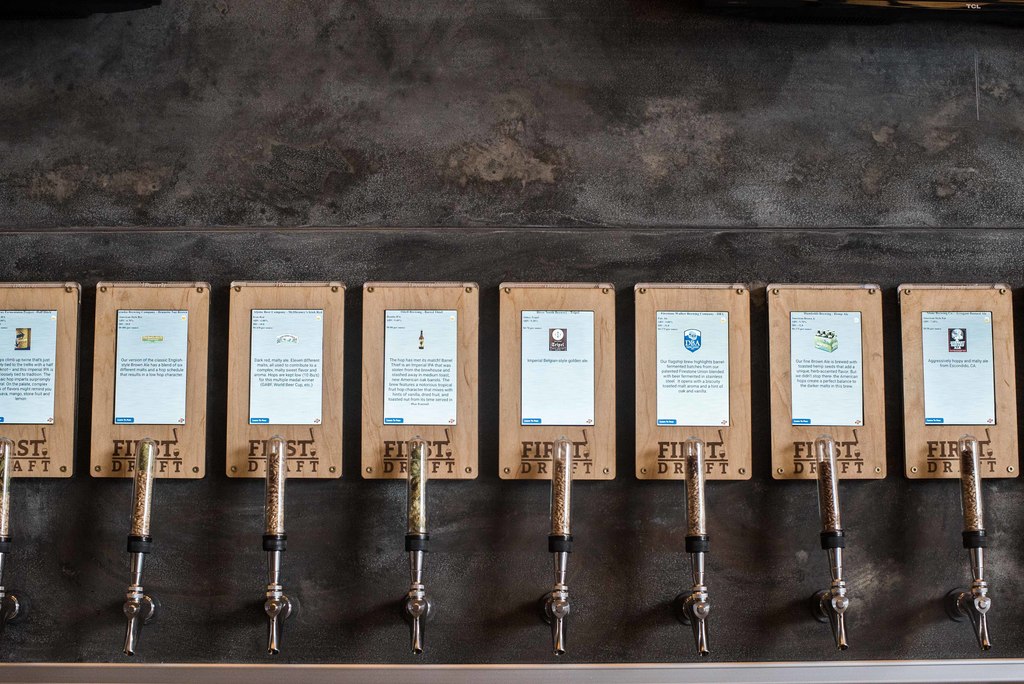 A quick view of the ever-changing tap list at First Draft reveals an understanding that yes, you do have to cater to a wide audience of beer drinkers, but that doesn’t mean you have to dig up the dregs of the most common offerings. There are several easy-drinking blonde and low ABV beers, but from breweries both local and national one may not have had the chance to experience or heard of. A taproom employee is always on-hand to help those looking for some assistance, both with the operation of the iPourIt self-service system, as well as a nudge in the right direction for whatever libation you’re looking for.

There are also plenty of choices for those searching for the most elusive of beer styles and brewery rarities, which are on a constantly rotating basis. This ability to choose your own pour size helps reconcile the dilemma one is typically faced with when deciding between such rare finds. I have continually been teased by beer stores that have carried Louisville, Kentucky’s Against the Grain Brewery beers, as I hail from the bluegrass state. But I have had a difficult time pulling the trigger on a $20-plus bomber of something I have never tried or received feedback on. So, I was more than pleased to see First Draft carrying its “Sho’ Nuff Belgian Pale Ale.” I have been hearing a lot of good things about New Belgium’s Sour Session Pale Ale “Hop Tart”, and a limited series ale from Stone, “Stochastisity Project” — both of which I was excited to see were available.

And thus is the beauty of the self-service taproom. I was able to sample all three, along with four others I had never heard of, for less than what it might cost for a full pour of just one or two. Some were phenomenal, and others didn’t quite hit the mark, but by only pouring as much I wanted I was able to control my own destiny and not experience the buyer’s remorse of languishing through a full pint of something I didn’t care for while a plethora of potentially delicious beers mocked me from afar.

Owner Mark Slattery has noticed some interesting habits among patrons, and credits the pour-your-own system with encouraging experimentation. “The most surprising thing was seeing how excited people were to try the variety of beers, as well as blend different ones,” said Slattery. Watching people peruse the line of taps, and read their descriptions while discussing the beers with friends validated this observation.

Pro tip: Blending beers might sound odd but it isn’t as foreign a concept as one may think. Breweries will do something similar when dialing-in recipes and seeing how different flavors work together. In recent years the combination of standard styles has led to new ones, perhaps most notably in black, or Cascadian (named after the variety of hop), IPAs, which combine the dark, roastiness of a stout with the bitter, fruity and floral aspects of an American IPA. 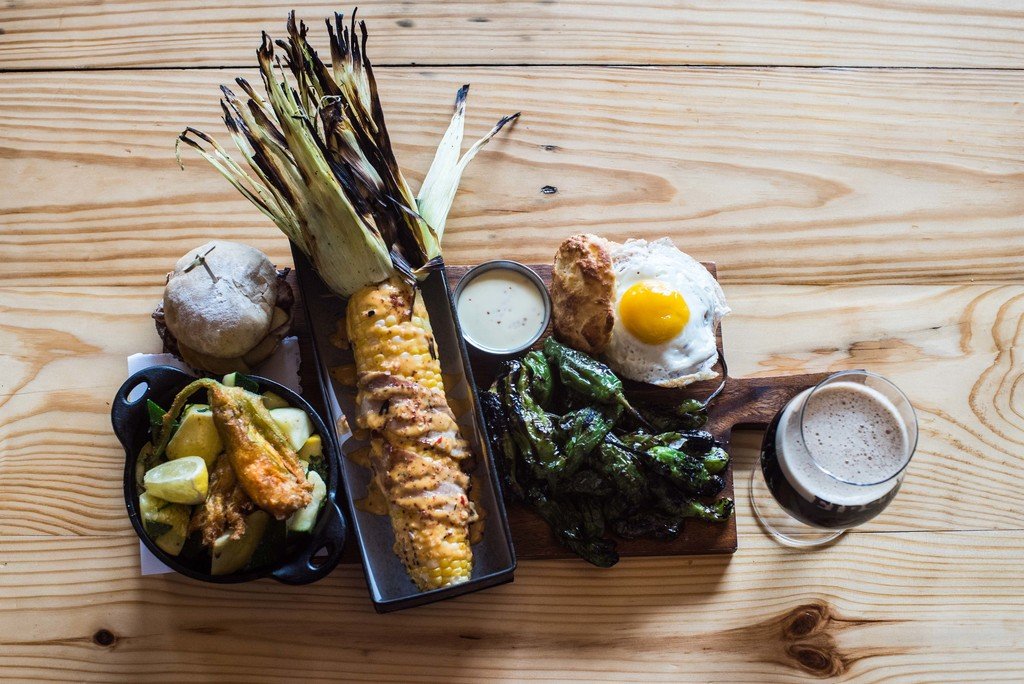 As a cherry-on-the-top to the experience, the food offered is not only a fabulous accompaniment to the range of delicious beers, but could easily stand alone as a new-American restaurant. Although one wouldn’t know a full kitchen existed if it wasn’t right behind the check-out counter, anyone who visits should get very acquainted with the menu. Slattery said a kitchen wasn’t in the original plans, however, the lease required one, so rather than make it an afterthought, he hired former Jax Fish House chef, Eric Lee to design the menu. Lee has been working in fine dining for years, but said he was drawn by the opportunity to work in a gastropub like he had done as a teenager in England:

“It’s a good chance to flex my culinary muscles in a different direction,” said Lee, referring to being able to create pub-centric food, but also heavily focused on craft without the contrived nature of finer dining. As for the actual food, the selection of sliders should instead be called half-sandwiches, as the offal and apples Slider more than satisfied a very neglected stomach. The combination of boudin, pork terrine, pate and brandied apples make a simple slider something much more decadent, while still remaining an affordable comfort food. A variety of other artisanal sliders are available, as well as eclectic small bites such as a daily selection of deviled eggs, bacon-wrapped corn on the cob, salads, and alcohol-inspired desserts. Slattery and Lee explained they wanted to keep with the theme of sampling, so they offer a variety of plates that encourage tasting and sharing.

Despite the minor details that every restaurant encounters in its first weeks and months such as educating patrons on both the use and proper way to pour a beer, the staff appears intent on learning and developing the pour-your-own and sampling theme that is essentially a new realm in the world of craft beer. It’s a rewarding experience to take a chance on something rare with a hefty price tag, and find that it not only meets but exceeds expectations, but life is short, so the alternative may not be so bad, especially if it involves a pint, or even just an ounce.