What: American diner food in a large space with a chameleonic feel: by day the restaurant is a family friendly eatery, by night a great bar with competitive nightlife.

Con: Some of the menu items can be hit or miss — the new Monte Cristo sandwich, for example, may be a tough contender as far as consistency is concerned.

Occasionally a restaurateur will go above and beyond to enhance the experience of dining out at one of their locations, using virtually every card in the deck to drum up patronage. It may not come as a surprise that the practice now even has a name: “eatertainment.“ But in early 2012, when Robert Thompson, who also owns Argyll Whiskey Beer, reopened the former Big Lots warehouse space on 65 Broadway, the concept was still fairly new — more or less unheard of in Denver… 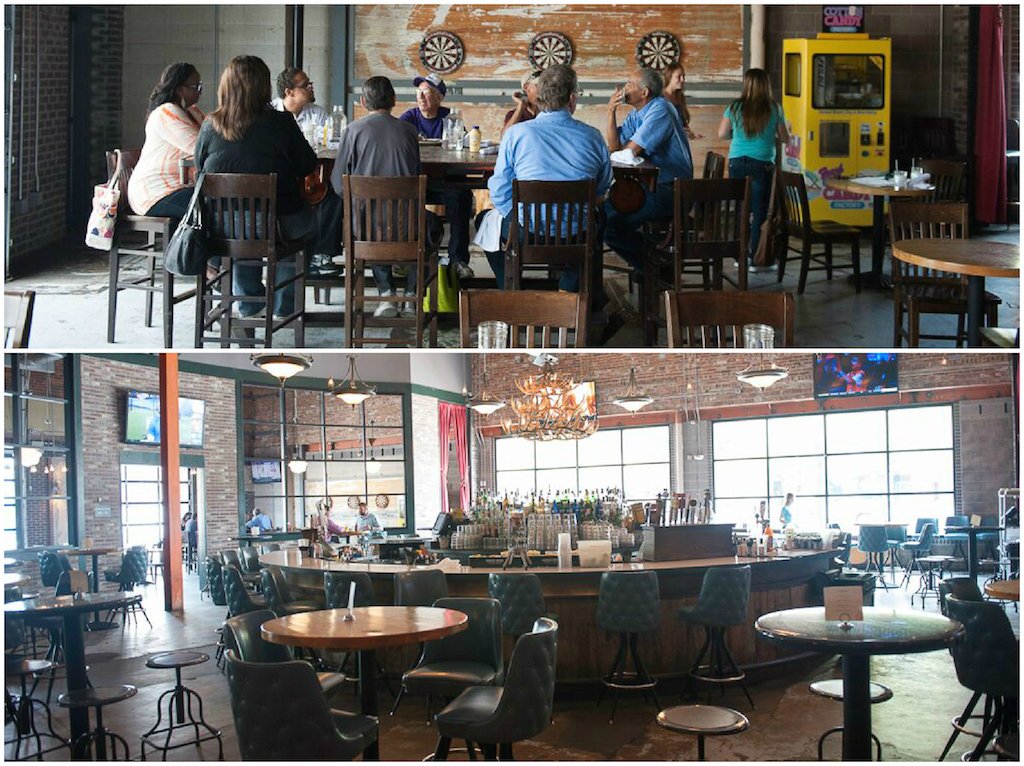 Enter the front doors of Punch Bowl Social Denver and you will find a long row of high-backed booths and another row of tables leading up to the open kitchen. The dining area extends to the other side of the entrance; four-tops, high-tops and banquet tables are scattered throughout and outdoor patio areas extend to both sides of the entrance. The seating encroaches into the second chamber of the space where a massive 360 degree bar overlooks the bowling lanes.

In this second area, Thompson brought together all the best elements of modern nightlife (dancing excluded) and reshuffled them into one big concept. In addition to an updated traditional American “diner” and three full bars, Punch Bowl Social has darts, bowling, arcade games, ping-pong, billiards, shuffleboard, and now two private karaoke rooms (the only ones within city limits, according to their representatives). While there is little to say about the post-collegiate, twenty-something vibe, similarly found in other large-scale LoDo locations on a regular Friday or Saturday night, the brunch is a different story altogether… 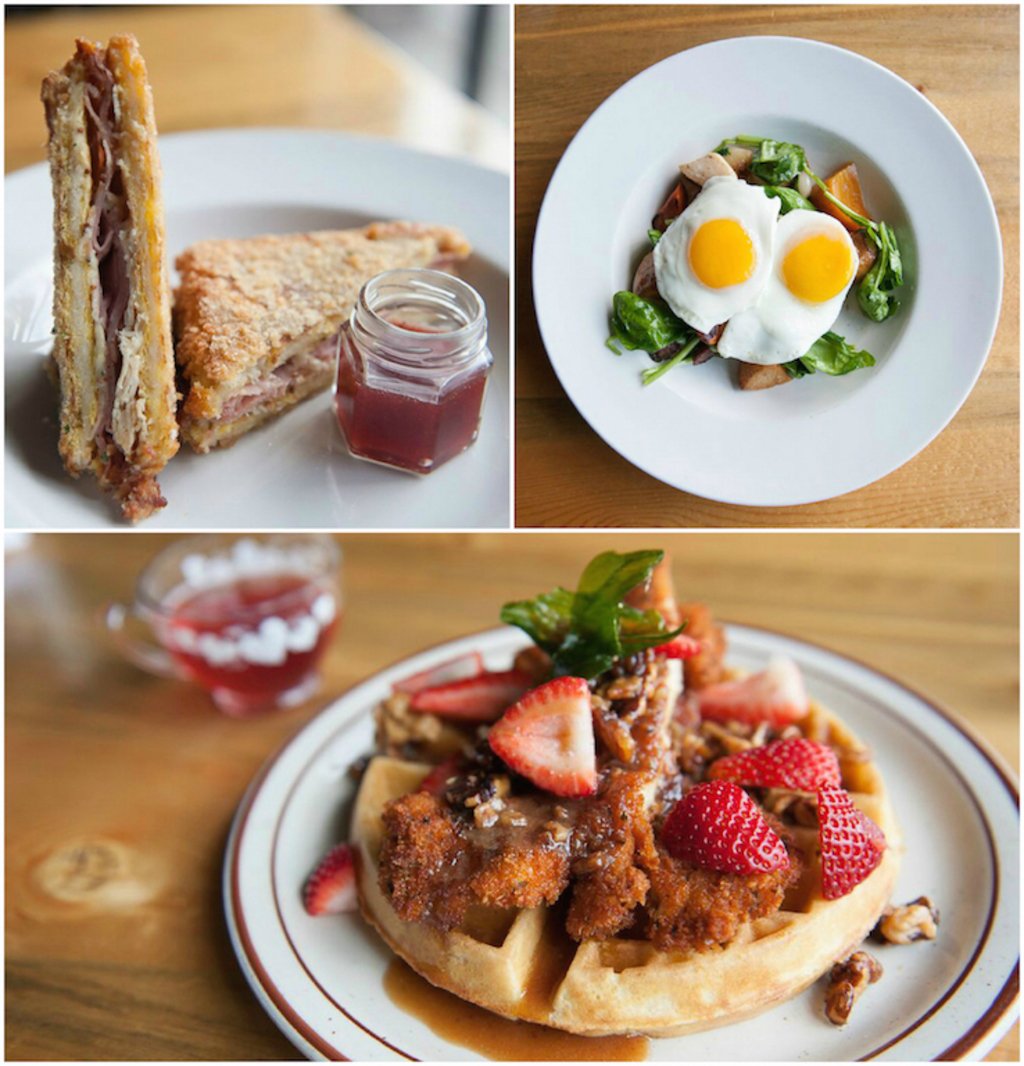 At its heart, Punch Bowl Social provides an approximation of the traditional American diner experience —  though, due to its sheer size, it is clearly not the characterful presence typically found in the northeast. Featuring food inspired, in part, by available local ingredients, the menu items ultimately transfer over to all the sister locations and echo the fare found in popular chain restaurants of yesteryears (e.g. Bennigan’s, Houlihan’s). A new entrée, roasted vegetable hash ($13), is a reasonable alternative for the more health conscious patron, but the chicken & waffles ($16) and monkey bread French toast ($12) are the kind of daunting plates for which a concept like Punch Bowl Social exists in the first place.

Denver General Manager Matt Boutwell emphasized that the restaurant’s gastro-diner approach is key to the emphasis on social interaction, in addition to the drinks and entertainment. “It’s a big menu that markets to all demographics and contributes to [Punch Bowl Social’s] stickiness,” he said, referring to the fact that most people who come to the establishment for one reason often end up staying for another.

While Punch Bowl Social’s Sunday-only Bloody Mary bar has drawn crowds and earned loyal customers ever since it was first introduced, the signature punches remain the distinguishing factors of its bar program. Beverage director Patrick Williams crafted each recipe himself and has worked at perfecting every aspect of the drink menu from the very beginning, including traveling to the restaurant’s other outposts to demonstrate the proper construction of a killer punch. A classic formula of one sour, two sweet, three strong, four weak typifies all Punch Bowl Social punches; they get their distinctive flavors from unique ingredients like watermelon shrub, lemongrass tea and peach bitters.

The newest addition is the Bachelor’s Bowl (single $8, party of four $32, party of eight $64), which Williams said, “was designed to help break down preconceived notions” of the cocktail in a bowl, and “encourage men to drink punch.” He contends, “the sky’s the limit” as far as new concoctions are concerned — the main thing is to assure the punches don’t come out too sweet or too tart.

Also, set to launch next week is a new lineup of cocktails which will include the Higher Fashion (Contratto Apertivo, grapefruit syrup, lemon juice, sparkling wine and grapefruit peel) in the menu’s New School category, the Pegu Club (gin, orange Curacao, orange bitters, Angostura bitters and lime juice) in the Old School, and the Cilantro Gin Fizz to the list of breakfast drinks.

Riding on the success of the other Punch Bowl Social establishments in Portland, Austin, Cleveland and Detroit, Thompson announced earlier this year that he is moving forward with a second Colorado location at the site of the former Stapleton airport as early as spring 2016. You can read more about it here.