The Doctor Is In: Doctor P Brought The Noise To Global & Answered Some Questions Too

Security led me through the labyrinth of underground corridors beneath the main stage of Red Rocks Amphitheatre, taking twists and turns and going up and down. We came up a final ramp and arrived at the artist greenrooms behind the stage. Night two of Global Dance Festival was already in full swing and the music rattled the rock walls as I was escorted further back to a door labeled Doctor P. The door was slightly ajar so I knocked and pushed it open. I stepped inside and saw Shaun Brockhurst, the twenty-nine year old producer from England better known by his stage name. Shaun leaned against a table arrayed with different food, snacks and beverages, and crossed the room to greet me as I entered. I introduced myself to him and we shook hands before taking up positions on one of the couches. He offered me a drink, which I accepted and we immediately got into a friendly off the record conversation. When I asked how he was doing he answered in his quiet British accent, “I’m kind of tired, I just played a show in Atlanta last night, but I’m very excited to be here at Red Rocks.” “And Red Rocks is excited to be here with you,” I replied. With that, we dove right in.

303: To kick it off, why don’t you tell us about how you got into producing music?

Shaun: I mean I kind of started to discover electronic music when I was a teenager, and I was very curious about how it existed. I came from a musical background playing drums and guitar and stuff and then when I started discovering electronic music I just didn’t understand what I was hearing. I started hearing Drum and Bass and thought how they are doing it. So I just started looking online trying to find out how it worked, and then trying it myself and it just happened. It took over. I stopped playing the drums, I stopped playing guitar and just purely produced electronic music.

303: That must have been a lot of fun for you playing around with different sounds as you taught yourself how to make music. You’ve been doing this for such a long time now I’m sure you feel as though all your hard work has paid off. Personally, you were one of the first electronic artists I ever heard when I moved out to Colorado in 2009, and you’ve introduced electronic music not only to me but thousands of people in many different countries. How does it feel to know that you’ve had that effect on people and have influenced a whole new generation of fans and artists in America and all over the world?

303: Well please believe me when I say that your great reputation is well deserved. Speaking of innovating, lets talk about Circus Records. How exactly did the idea of a record label come about, you and Flux Pavilion and a couple other people just sat down and said this is something we want to do?

Shaun: Yeah I mean that was basically it. I was friends with Flux already and he was making Dubstep and I was having a little try with Dubstep. I was already signed under the name DJ Picto to Maximum Boost Records, which is owned by Swan-E, and they’d heard about this Dubstep thing that was blowing up and I was like, ‘Oh yeah my friend Flux makes Dubstep.’ I played some of his tracks and they said to bring him down and we’d all have a meeting together. We just talked and decided the best thing to do was start a new label and see what happened.

303: It sounds like starting an electronic music label was a very bold move at the time. But it has obviously worked out really well for you guys, I mean the label is huge now, and you have a whole array of artists signed to Circus.

Shaun: Yeah we have a whole team now, I’ve lost count of the number [of people], but we have like a proper office in a proper office building with people on the payroll and everything. It has really become a proper company now.

303: So now that Circus is not only up and running but is hugely successful, what other projects have you been working on? How about your side acts Sounds Destructive and Slum Dogz?

Shaun: So Sounds Destructive is me and Trolley Snatcha and Slum Dogz is me, Krafty and Swan-E, and those projects were kind of more just for fun. I used to live with Trolley Snatcha so we used to just make music together at home. And Swan-E and Krafty, we just used to get in the studio together and have a laugh and some tunes would come about. We never really had time to get Slum Dogz off the ground, I really would’ve liked to get it off the ground and make it a proper act but I was so busy with Doctor P and Swan-E was so busy running the label we never had quite enough time to make it happen, which is unfortunate.

303: It’s not too late you can always come back to Slum Dogz later when you have a bit more free time. It’s something to consider for the future.

Shaun: Yeah one day we’ll pull something out of the bag and bring Slum Dogz back.

303: You definitely should. Following that idea of not having as much free time as you would maybe like, you spend a huge amount of time touring the world. What do you really like about being on tour and what are some things that you don’t necessarily like as much, like not really having any free time?

Shaun: I mean touring is great, obviously, you get to see the world and go to places people want to go, but it’s not as much fun as people would think. Mostly it’s just being in an airport and being really tired and not eating properly and not sleeping properly. So I mean its good fun, but I like being back home.

303: Very understandable, there’s nothing quite like sleeping in your own bed. On the note of worldly travel, if you could play a show anywhere in the world, where would it be and why?

Shaun: Actually Red Rocks is one of the places I usually say. I’ve only played here once before so I’m excited for tonight.

303: Awesome well that’s a great answer! Let’s move on to something a bit more personal if that’s alright. Can you name some of your greatest influences, both musically and in terms of life?

Shaun: I would say that everything kind of influences me in one way or another. There are a few artists who have influenced me a lot; Drum and Bass in general has really influenced me a lot. And I’d say Hip-Hop as well. A lot of the feel of my music comes from Hip-Hop, I think. I kind of try to take the feel of Hip-Hop with the sounds of Drum and Bass, that’s what I always try to do.

Shaun: Dead, that’s a tricky one. I’d have to give that some real thought. Alive, I would love to do a track with Knife Party. I have spoken to them about doing it but that’s just one of those things. You have to both put in loads of effort to make it happen; you have to get into the same room together. I think I’ve spoken to every producer about doing a collaboration it just doesn’t happen. But I would love to collaborate with Knife Party, I’ve been a huge fan of those guys forever.

303: Yeah you’ll have to think about an artist that’s passed away and get back to me sometime. A Doctor P Knife Party collaboration would be awesome though, and I’m sure it would be a lot of fun for you to work with artists you’ve admired for a long time. What’s some advice you would give to young aspiring producers that admire you?

Shaun: You just have to put the time in. I feel like that’s where a lot of people fall down. I know a lot of producers who, they want to be a big DJ and everything, but they don’t quite put the time in with the production. You just have to make like thousands of songs. I think I must have made a thousand songs before they started getting anywhere near sounding good. Like my friends were all going out and I was staying home and making music. That’s the key.

303: That’s some solid advice. Anything and everything takes practice to master. Were those the same friends that gave you the nickname Picto? How’d you get that nickname to begin with?

Shaun: On Nokias, the old Nokias, remember predictive text? Well if you typed Shaun it changed it to Picto. So when people texted me they would just leave it as Picto and it stuck.

303: I do remember those old brick phones and how much of a pain texting was on them. That’s pretty funny that you earned a life long nickname from old school auto-correct. Just like those old phones, electronic music and the culture around it are a lot different now than five or six years ago. How have you experienced this shift over the course of your career? How have you seen the music itself and the scene evolve over the last six years?

Shaun: It’s really surreal to see something that I got into when it was virtually unknown, like none of my friends had heard of electronic music when I got into it, so it’s so strange now that it’s like the music that everybody listens to. Like you can’t avoid electronic music now. It’s just so surreal to have seen it go that way. I guess I just picked the right music; I’m really lucky I picked the right music to get into.

303: You are lucky, but you can’t deny you’ve got mad skill too. Those skills have been busy on stage recently but what about in the studio? Any new tunes of yours we should be looking out for soon? Without spoiling too much, what does the future hold for you?

Shaun: I haven’t been putting out a lot of music lately; I’ve been just struggling to find music that I actually think is actually worth putting out. Like I work on music all the time but I rarely get a track that I think is worth releasing. And I’ve actually got six tracks finished, well like ninety-nine percent finished, that I think are worth putting out. So hopefully, between now and maybe Christmas, I’m going to have a steady stream of releases.

303: Hell yeah, that’s great to hear Shaun. We can’t wait to see what you’ve come up with and look forward to you releasing those songs. Thank you so much for sitting down with me today and have a great time playing Red Rocks tonight!

Shaun had time for a quick picture with me before doing a meet and greet and final prep for his set. As the sun set on Red Rocks, Shaun stepped on stage and immediately kicked it into high gear. The crowd roared as speakers rattled into life and lasers shone out from the stage, dancing wildly across the amphitheatre. The rest, as they say, is history. 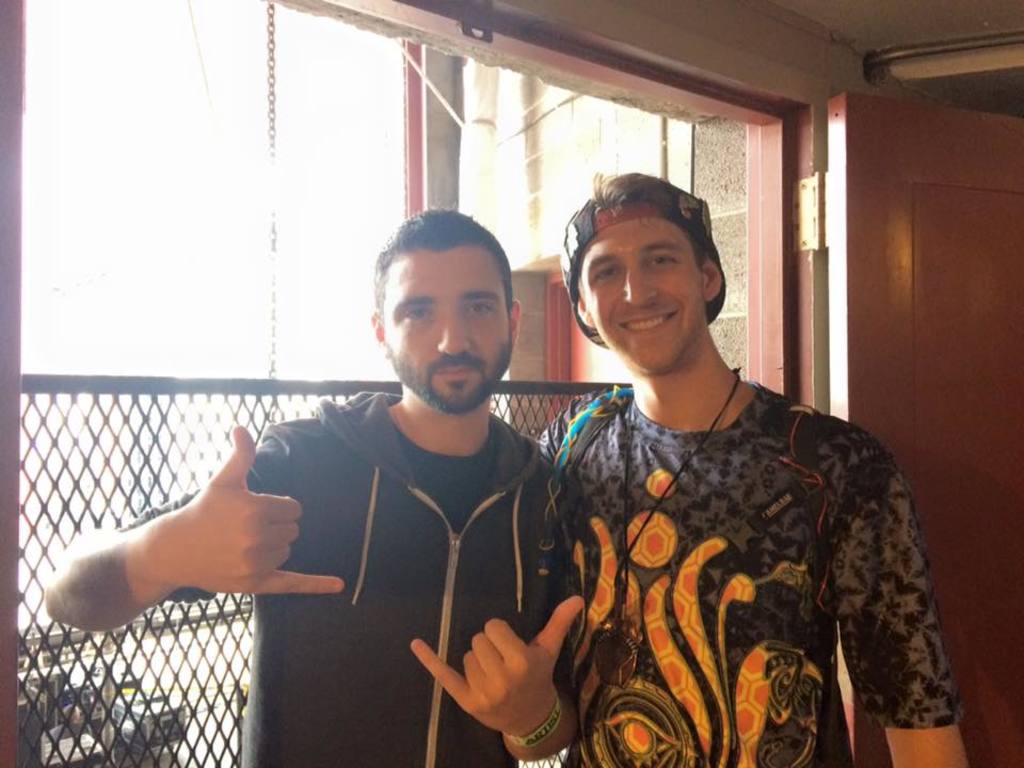